The Snug in Brunswick, with Christmas in July 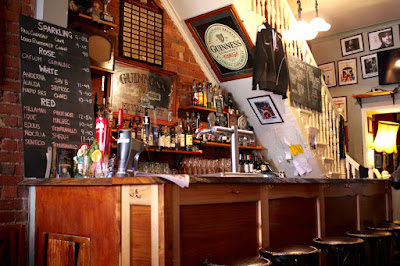 We had a great meal at The Snug in St Kilda some months ago.  It has taken us so long to visit the Brunswick sister pub that sadly in the meanwhile, the St Kilda one has closed.  The Brunswick pub has some fine vegan offerings but not as extensive a menu as over the other side of the river but it feels far more like a pub than the St Kilda one. 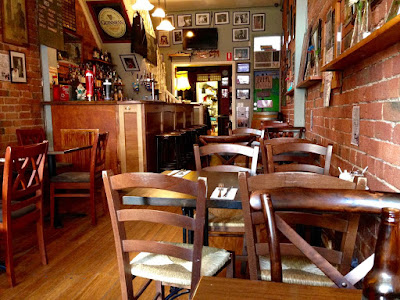 The exterior of The Snug is quite unremarkable in the Sydney Road shops closest to Brunswick Road.  Inside the cosy narrow space with framed pictures across the red brick walls feels more traditionally Irish than the usual spacious modern Australian pubs.  It is perfect for winter.  They also have a beer garden that has the same eye for detail in decor and would be more attractive to me in summer. 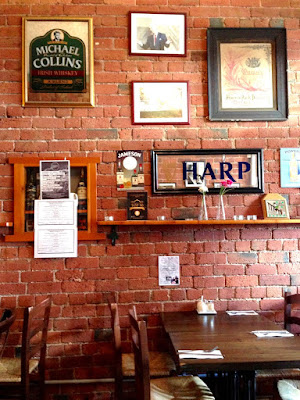 The first time we visited was a weekend morning and the place was pretty busy.  Apparently they were recovering from a crowded night.  (Many of my photos of the wals are from the Friday when it was quieter and people did not get in my way.)  Cindy had alerted me to the the Snug having vegan breakfasts. 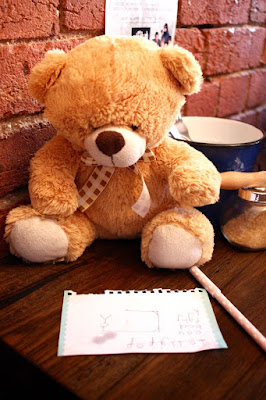 We started with hot chocolates for Sylvia and me (and latte for E).  I did not get a photo.  They were actually rather bitter.  However once a spoonful or two of sugar was added, I really loved mine.  I think ours were soy.  After we had ordered a vegan brekky and soy milk, it was very kind of the landlady to let us know that the marshmallows are not vegan.  Sylvia still had a few on her hot chocolate.  (I do my best to avoid gelatine but some days it is hit and miss.)  Mr Cuddles concentrated hard on playing hangman while we waited for our food. 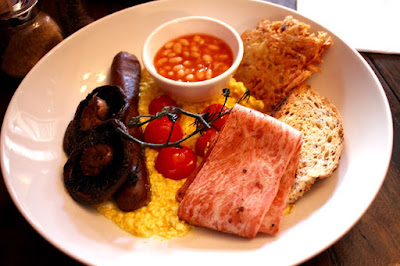 I confess to a fascination with vegan breakfasts that is born out of never liking eggs and being vegetarian for almost all my adult life.  So I went straight for the Full Irish vegan breakfast: sausages, beans, hash brown, facon, tofu scramble, cherry tomatoes, mushrooms and sourdough toast.  It is rare that my breakfast mirrors E's regular meat and egg big breakfast like this one.  He was very impressed with his Full Irish.

Kudos to the Snug for this impressive plate.  I enjoyed it but I did find the silken tofu scramble a bit soft for my liking and the facon a little too like bacon for me.  On the other hand I loved the crunchy hash brown and the Tofurky sausage.  In retrospect, I think I might have enjoyed the corn fritters more.  Next time.  Sylvia had a sausage, hash brown and beans,  She wasn't into the sausages which were slightly spicy but she loved the rest of it. 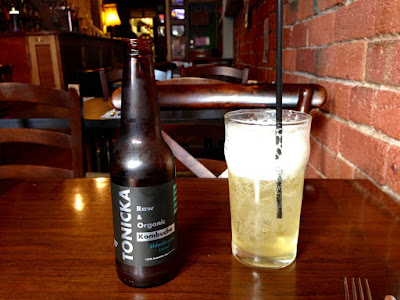 My next visit was on a Friday lunchtime.  The pub was far quieter.  Good for photos.  Less good for atmosphere.  However I was happy to have a quiet lunch in the corner after some shopping.  I started with an elderflower kombucha which I really loved.  I would even go out on a limb and say this Tonicka kombucha was one of the nicest I have ever had.  (And I love a glass of the fermented stuff.) 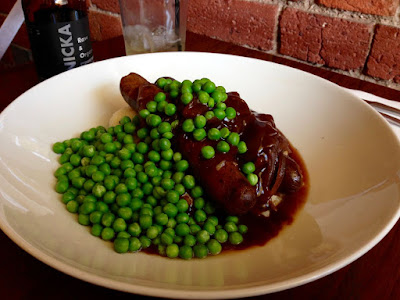 The vegan lunch menu is packed with mock meat choices.  I ordered the bangers and mash.  The I remembered Faye's advice that the meals were huge.  She was right.  I was there because I had the opportunity rather than because I was starving.  Then I found myself faced with a huge pile of mashed potatoes, two large Tofurky sausages, a pool of onion gravy and a truckload of peas.  It didn't take me long to fill up.

I was very grateful that the landlord passed and said it could go home in a doggy bag.  I went home with some very good side dishes and some leftover sausages. 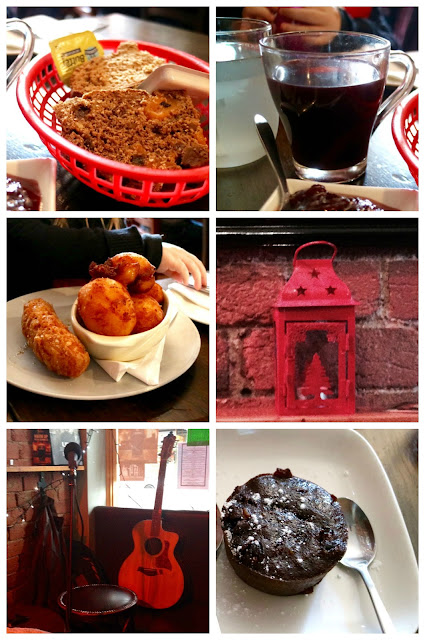 My latest visit was organised after I heard that The Snug were doing Christmas in July.  As regular readers know, I love Christmas in July.  In the past, I have been to such dinners where vegetarians aren't well catered for.  So I was curious to try this one, even though the Snug does more mock meat than I would usually eat. 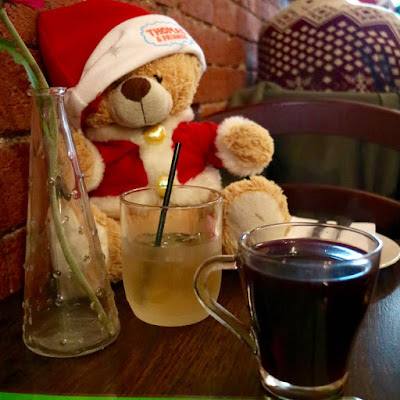 We headed out to The Snug last weekend.  The Facebook page said to wear a Christmas jumper to get a free drink.  Which was worthwhile when a glass of mulled wine was $8.50.  Unfortunately, it is not so easy or practical to have Christmas jumpers in an Australian summer so we were unable to dress the part.  At least Mr Cuddles had a festive outfit to wear.  If only he could have ordered my glass of (very strong) mulled wine or even's Sylvia's ginger beer!

As well as Christmas jumpers, there were fairy lights, the festive aroma of mulled wine and Irish music from a man in a santa hat with a guitar in the corner.  He sung a pleasing gentle mix of modern Christmas and Irish folk. 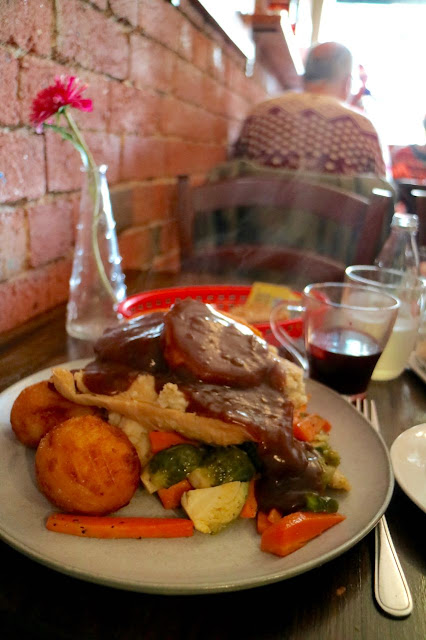 I ordered the vegan Irish roast dinner.  It was described as vegan roast turkey, ham and all the trimmings.  As I have written before, my Australian roast dinner is quite different to that in the UK/Ireland.  The trimmings were roast potatoes, mashed potato, boiled carrots and sprouts, stuffing, gravy, bread and butter, and cranberry sauce.  And a small pudding (not vegan) or brownie at the end.  Because, by the time you worked your way through that meal, you only wanted a small dessert.

The meal was huge.  The ham was like little orange-pink round of vegan sausage and not too bad.  I could not eat the huge slice of turkey which was just too like meat for me.  (I know some vegans miss turkey but I never have.)  I am not so into boiled carrots and missed the roast pumpkin that we have always have at Christmas.  On the other hand, I loved the stuffing and gravy which I often don't get at a roast dinner.  And I enjoyed the sprouts.  E loved his meaty roast dinner.  We ordered roast potato and battered vegan sausage for Sylvia.  She was not keen on the sausage but I thought the crispy batter was very good. 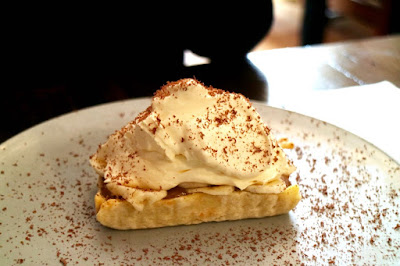 As Sylvia had not had the Christmas meal, she chose some banoffee pie for dessert.  This was not for me as I have a soft spot for my mum's caramel tart, but Sylvia loved it.  It wasn't as huge as I feared.  It is made for lover's of cream. This was two third cream!  That's insane.  Perfect for a little girl like Sylvia who rarely has cream at home because I don't like it.  And E took some for his pudding which was served without cream or custard. 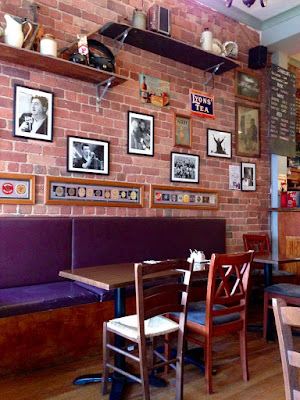 I love the ambience of The Snug and that they cater so well for vegans but I wish it has more vegan food without mock meat.  The corn fritter brunch is the exception that I must try.  Not much else.  However the staff are friendly and it does well to feel like a cosy pub without being a caricature of an Irish pub.  I miss the extensive menu of its former St Kilda sister pub but I hope it does well because I hope to drop back in when I can.