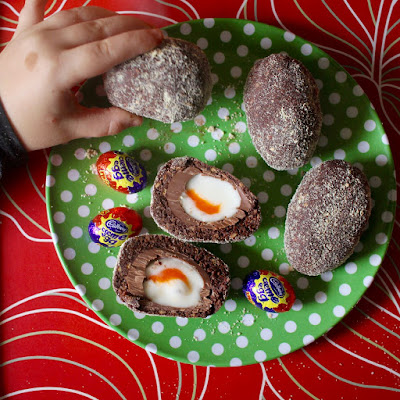 Never having liked eggs, I have often admired how pretty they are in certain recipes.  Such as a Scotch Egg.  I can't imagine I will ever eat a traditional one made with minced meat around hard boiled eggs.  So when I saw Lorraine making a chocolate version with a Creme Egg, I could not get the idea out of my head.  Finally a chance to eat Scotch eggs, albeit with chocolate. 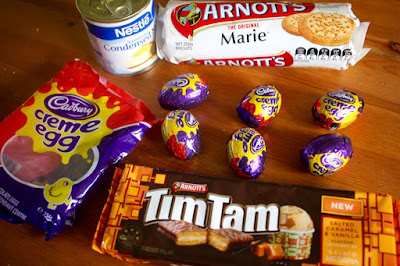 Lorraine used Tim Tams and cream cheese for the "meat" around her creme eggs.  I just could not get the idea of using the mixture of my favourite grubs.  However I knew it would be sweeter because they have condensed milk.  I decided to use a salted caramel and vanilla Tim Tam instead of the usual Marie Biscuits.  In future I might use regular chocolate Tim Tams.  I think the vanilla was not my cuppa tea.  Instead I tried to reduce the sweetness of the "meat" by adding more cocoa and some salt. 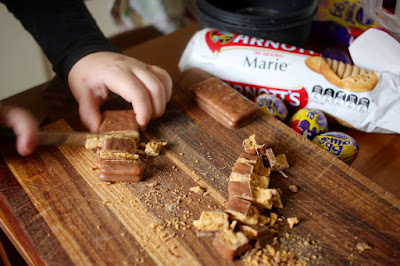 Getting the "meat" around the egg was quite challenging.  We struggled to get the right egg shape and one or two eggs cracked as we tried to coat them.  (I guess this is also hard with the traditional meat Scotch Eggs!)  We also used condensed milk that was past the best before date.  It was edible but quite thick.  Not ideal.

I used Marie Biscuits for the "breadcrumb coating".  But I think they were ground too finely in the blender and were more of a powder than a crunchy coating like Lorraine's.  And that powder got all over the kitchen.  I try to contain my mess when cooking but when I have help from my 8 year old, it does tend to spread. It didn't help that I put the crumbs in a small bowl.  I think 10 biscuits was too much. 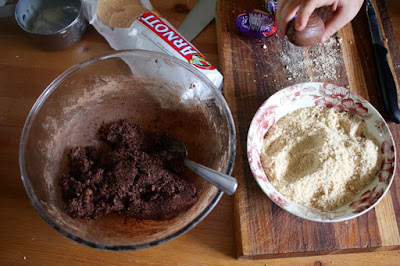 Sylvia had a lovely time making these with me yesterday.  (And being my hand model!)  Which was just as well.  I had promised her a baking day but it went awry.  The hot cross buns took ages to rise, we ran out of butter and when I tried to do chocolate for another treat, it seized in the microwave.  And on Good Friday, the shops aren't open to nip out and buy more.  E enjoyed helping us eat them.  He is quite a fan of Cadbury Creme Eggs. 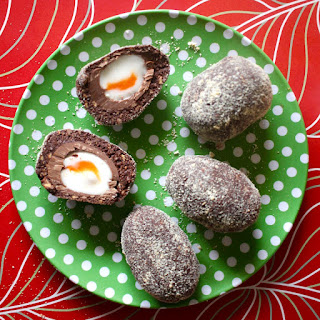 It was a fun Easter project but one I am unlikely to repeat.  I find Creme Eggs rather sweet and with the coating it was just sweet on sweet.  When I was amused to make them, I would prefer more chocolate and less fondant.  Eating a whole of these Scotch Eggs is rather overwhelming.  I found myself cutting them into small slices.  And that just does not seem cricket when it comes to Scotch Eggs.  But then again, neither is chocolate!

I am sending these to Choclette for We Should Cocoa.

For more Easter ideas, go to my Easter Recipes round up.

Unwrap Creme Eggs and blend Marie biscuits to coarse crumbs.  Put the biscuit crumbs in a shallow bowl.  Whiz up Tim Tams in blender til crumbs.  A bit of texture is good.  Mix with condensed milk, coconut, cocoa and salt.  Divide the mixture into six parts and press one sixth around one Creme Egg with your hands and shape into egg shapes.  Roll in Marie biscuit crumbs.  Eat in small amounts.

On the stereo:
Acoustic 80s: Alternative hits from the Eighties: Various Artists
Posted by Johanna GGG at 08:57