Raspberry Lemonade and outings in Melbourne 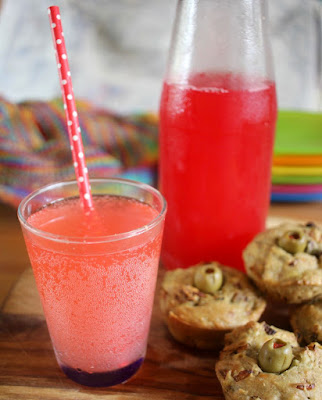 Summer weather is on the way out.  I am not too bothered but I will miss the summer fruit.  We have had some gloriously juicy nectarines and some joyfully cheap berries.  We bought so many punnets of cheap raspberries that Sylvia and I decided to make some raspberry lemonade.  Lovely pink lemonade to drink between summery outings. 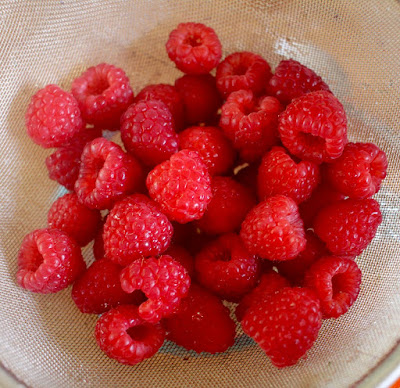 Our neighbour had given us some lemons she was not using.  The resulting raspberry lemonade was wonderful.  It smelled of raspberries and had that slightly floral flavour which took the edge off the lemonade.  It was far more successful than my attempt at raspberry lemonade many years ago.  (A shame because the photos in the old post still make me happy.)  I guess it helps that we make lemonade quite often.  Once you have lemonade down pat, it is not hard to tweak it with raspberries. 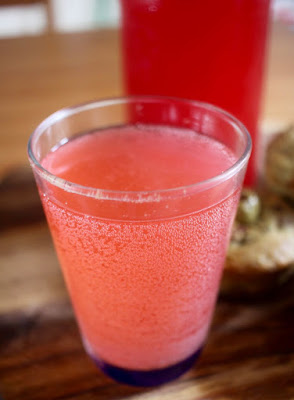 The raspberry lemonade saw us through quite some fun time.  Let us share a few outings. 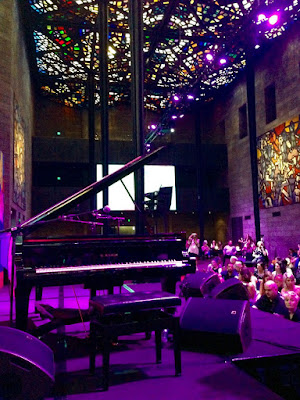 We saw Amanda Palmer perform at the National Gallery of Victoria.  I took the above photo before the gig began.  I really loved seeing her perform in front of the artwork in the Great Hall but was a little sad that they turned off the lights on the magnificent stained glass ceiling.  Most of the time everyone was too mesmerised by Amanda Palmer but it wasn't always easy to see and my eyes would have enjoyed wondering to the artwork on the ceiling. 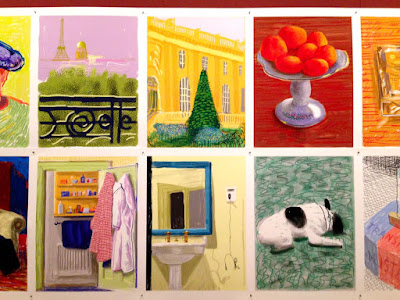 Our tickets to Amanda Palmer included entry to David Hockney's "Current" exhibition.  The exhibition costs $25 to enter so it was good value to buy a $30 ticket to the gig and have the exhibition included.  I would not have got along to this exhibition otherwise and, having no expectations, was pleasantly surprised.  There were the small pictures above that were created on an ipad. 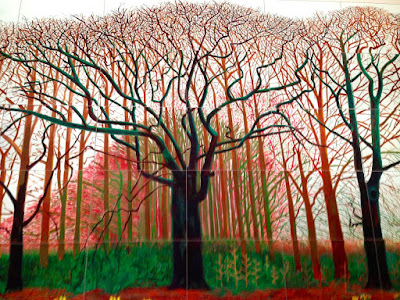 And there were the large pictures that covered a wall such as the above trees and the below photo of chairs.  While I enjoyed the variety of the small pictures and the long gallery of portraits, I really like the large pictures that make me feel like Belle in Reaching Tin River when she runs into a blown up photo to try and become part of it.  Don't worry, I didn't run into any of these pictures.  But I just loved that scene in the book and have never forgotten it. 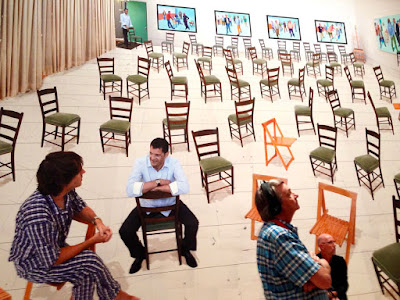 An Indian dinner, an exhibition and a gig is a rare treat of a night.  Now that we don't do it so much, I get amazed to see how many people are out late when we come out of an evening show.  As it was the Friday evening of a long weekend, there was a party atmosphere, with the Moomba fun fair lit up in the distance. 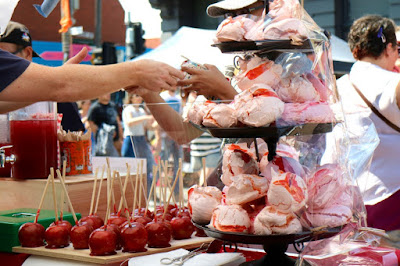 We also got along to the Sydney Road Street Party this year.  The Brunswick section of the street is closed to traffic to make space for market stalls and performers.  We were there to see E play with his ukulele group outside the Town Hall.  They were great fun.  Then we wandered around the stalls.  We admired the above meringues and toffee apples but resisted temptation. 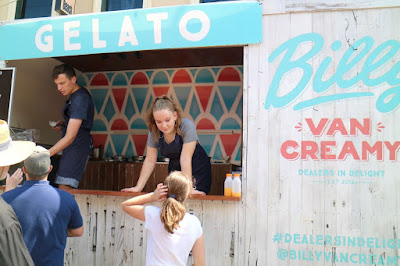 Instead Sylvia decided she really wanted an ice cream from the Billy van.  It was warm enough for her to buy a new rainbow sunhat.  We had been snacking on some nibbles from The Source Bulk Foods Store.  E got a sausage in bread from a BBQ.  I looked at vegan burgers, gozleme, falafels, curries etc. 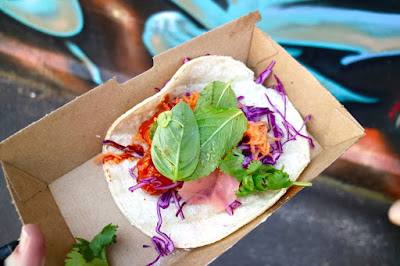 Finally I decided on a Vegan KFC Taco from Basco's street stall.  It was a Korean fried cauliflower, Asian slaw, vegan mayo, gochujang sauce, pickled ginger and fresh herb.  Basco was popular.  The wait was lengthy.  As I waited I noticed that the taco was marked as spicy.  It was indeed, but not too hot for my delicate tastebuds. I loved my taco and just wished I had ordered two of them.

I'd love to visit Basco for a meal.  They seem to have lots of interesting vegetarian food.  Sadly they seem to only be open in the evening which is less convenient for me.  Maybe one day. 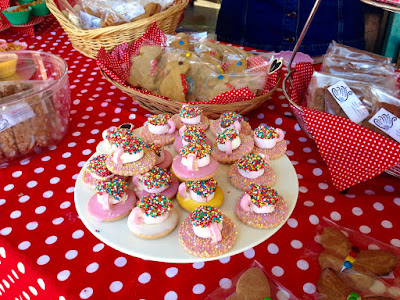 The last event to share is the Undiagnosed Children's Awareness Day in Northcote held by Syndromes Without A Name (SWAN).  We stumbled into the event thanks to a recommendation to go along.  It was a fete/fundraiser with the usual bouncy castle, cake stall and raffles.  Mostly Sylvia and I had the Grill'd sliders, the sweet slices and zooper dooper flavoured ices.  It made me me think of how hard some families have it and how lucky we are.

Gently heat the water and sugar in a small saucepan until sugar is dissolved.  Remove from heat.  While this is heating, push the raspberries through a sieve and discard pulp (or save for muffins or smoothies).  Add the lemon juice and strain into funnel above a jug or bottle that you can store in the fridge for a few weeks.  When ready to drink, put about 1 part raspberry lemonade mixture with 2-3 parts soda water.