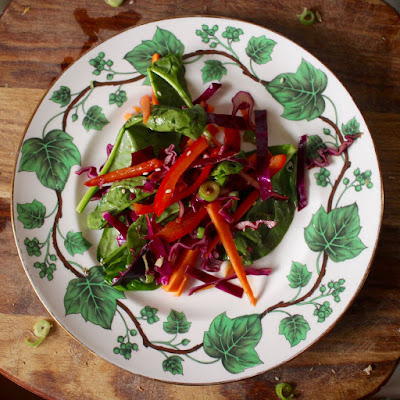 April has arrived, ushering in some autumnal weather (after a very hot start to autumn), the end of daylight savings and a suggestion that our salad days might soon be over.  I am still settling into my new job.  However I have found my online bookmarks and am cooking more.

Above is a salad from a supermarket magazine.  It was like a coleslaw with a gingery Asian vinaigrette.  I planned it for days.  When I made it, the dressing was too acidic for me.  A shame.  I loved all the vegies.  Fortunately I have been finding that plain old coleslaw has been working for a quick vegie side dish. 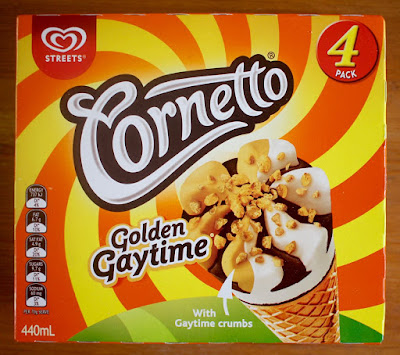 It has been a summer of Golden Gaytime ice creams.  So I could not resist trying the Golden Gaytime Cornetto (which I thought I saw somewhere as the Gaynetto but perhaps I just dreamt that up).  I really liked the butterscotch and vanilla swirl of ice cream, even though it not something to eat regularly. 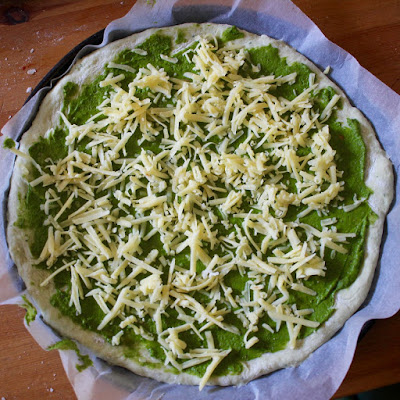 St Pat's Day found me with limited energy.  I went for one of the easiest green option.  Pizza with pesto and cheese.  Well, I guess it would have been easier if the pizza base and pesto weren't home made.  It was nice but a bit stodgy without vegies on the side. 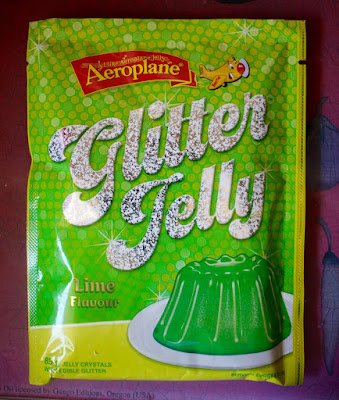 I have become more strict on gelatin over the years of being vegetarian, though some gelatin occasionally finds its way into the house.  But I do draw the line at jelly using gelatin.  So when we found this Aeroplane Glitter jelly did not have gelatin, I bought it for Sylvia.  She loves jelly.  Luckily my mum has made jelly a lot.  A lot!

So when we bought this packet, I showed her how to pour in the boiling water on the jelly crystals and then add ice blocks.  I added a few too many iceblocks and it was too sloppy.  We bought another packet and added less ice about 1/2 a cup rather than 3/4 cup and no extra cold water) and it works quite well.  I think Sylvia now thinks we will live on jelly.  Sadly, as it is sugar and chemicals, I am not sure it will be in our house that often.  But at least I can offer Sylvia the fun of jelly making without gelatin. 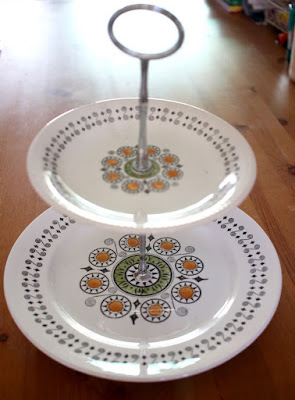 At the Sydney Road Street Festival.  I fell for this tiered cake stand made of vintage plates.  I love these sort of cake stands but don't really use them much.  They gather dust and are awkward to wash and store.  Yet I am often drawn to them.  I purchased this one because the woman who makes them said she is not making any more because it has become so hard to pick up vintage plates cheaply.  I am glad I have it but I am finding it hard to keep my promise to myself to put out the other tiered stand that I own. 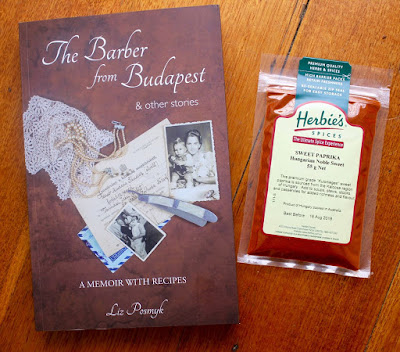 Last month I was delighted to win this beautiful book, The Barber from Budapest and other stories: a memoir with recipes by Liz Posmyk.  In case you don't recognise the name, Liz Posmyk is no other than Bizzy Lizzy who hosts In My Kitchen.  I love reading her blog.  She writes in a thoughtful and entertaining style that makes me look forward to reading her book.  (And now that I finally finished The First Fifteen Lives of Harry August and Burial Rites, I think the Barber from Budapest is next.)  I also received a packet of Hungarian paprika to assist with making some of the recipes from the book. 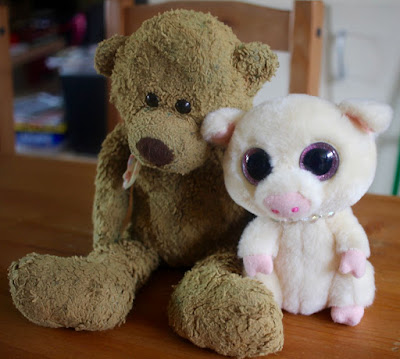 We have a new small chum in our kitchen.  Sylvia loves catalogues.  She was given one for Beanie Boos with some cute little giraffes she was given for her birthday.  She set her heart on Piggly.  But apparently they were rare.  Then amazingly she found one in the local supermarket and had to buy it.  Yes.  Had to!  Well, he is pretty cute. 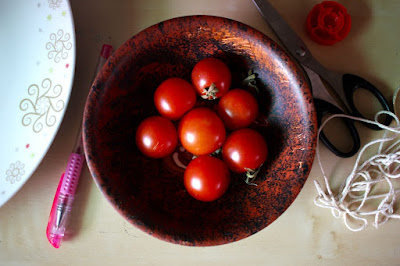 It has been tomato season.  The above tomatoes are from the school.  Sylvia's close has been doing a Kitchen Garden program and there were selling the tomatoes.  They were really good.  For tomatoes.  I sort of enjoyed them.  In the way that someone who hated tomatoes as a kid and has sort of come around to them as an adult.  At least I can appreciate how pretty they look. 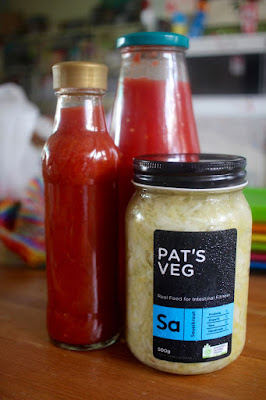 My mum has been making tomato sauce and passata.  It has been great to have her home made sauce.  I have also been eating sauerkraut.  Tomato sauce is like mother's milk (though not on chips) but I still find sauerkraut a challenge. 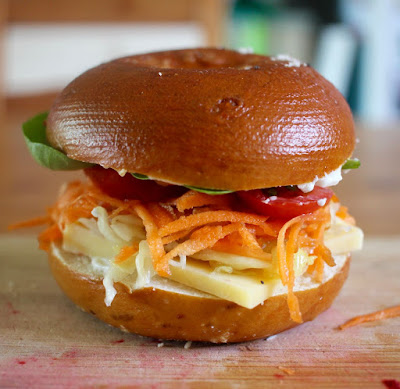 Here is one of my sauerkraut meals.  Pretzel bagel from the Farmers Market, with cheese, sauerkraut, grated carrot, tomato, spinach and mayo.  A good lunch. 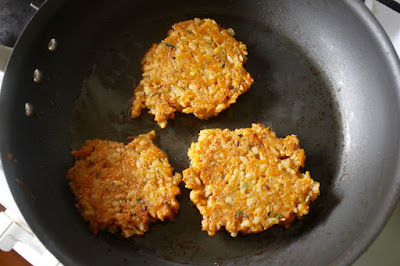 Another lunch I've had a few times is sandwiches with these fritters.  They are great between two slices of bread with cheese, spinach and Branston pickle.  Which is a win with a mistake.  I decided to use sourdough starter in Sylvia's favourite tofu nuggets instead of the milk and flour.  Then I remembered that I had only used about 1/4 cup of starter topped up with milk instead of 1 cup starter.

I mixed the leftover seasoned starter and breadcrumbs, with some brown rice, grated carrot, finely chopped nuts and probably a bit of other stuff I don't remember.  They were weird but work well in sandwiches.  I still have a few in the freezer. 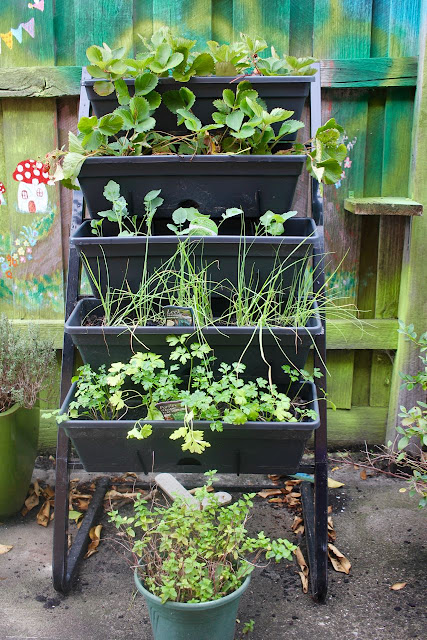 Sylvia went to a party a few weekends back.  I painted a door frame that was getting shabby, got some treatment for the citrus leaf miner on our lemon and lime trees, and I added broccoli, leek and parsley to my planter.  I am no green thumb so I will be relieved if they don't die.  Just look at how messy my leeks look.  There were so neat in the punnet but once I repotted, they look like some crazy punk haircut.  The strawberries in the two two pots have produced well and apparently are likely to produce again next year. 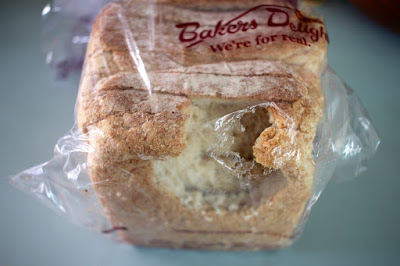 Seeing in a mouse in the kitchen has been pretty awful.  Even worse was waking up one morning and seeing it had taken this chunk out out of this loaf of bread.  It was time to lock up all of our food and get a new cat. 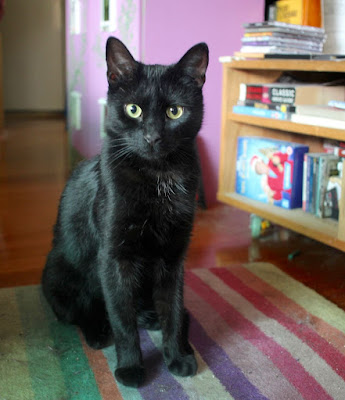 Seriously, we didn't get a new cat because of a mouse.  But we did get a new cat.  He is called Shadow.  A quiet and gentle cat.  Until night when he wants company and to claw the bed to remind us of this.  We are working on it.  Locked him in the bathroom.  He opened the door.  Now he curls up with Sylvia on the bed at night to look so cute we can't lock him up.  It is a work in progress.  As are my attempts to take photos of a black cat.  At least we haven't seen the mouse since Shadow arrived.

I am sending this post to Lizzy of Bizzy Lizzy's Good Things for the In My Kitchen event, that was started by Celia of Fig Jam and Lime Cordial,  If you would like to join in, send your post to Lizzy by 10 March.  Or just head over to her blog to peek into more kitchens.  And stay tuned for next month when Sherry takes over from Lizzy as host.
Posted by Johanna GGG at 22:11