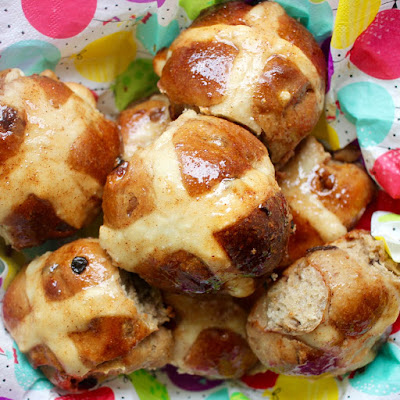 This is my third year making and blogging a batch of sourdough hot cross buns.  Each time it seems like I have it and then the next year I want to change it up.  This year I decided to simplify the steps and then got paranoid the dough wasn't rising so I left it for hours.  The resulting hot cross buns were superb.  They have seen us through the Easter weekend and we still have some in the freezer. 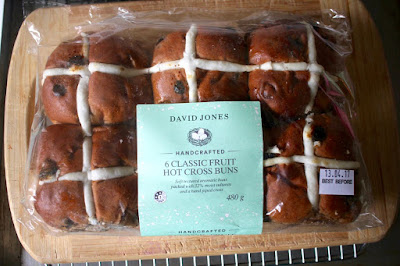 We have had a few different hot cross buns in the house.  Last week on Wednesday I realised how soon Good Friday would be upon us.  I happened to be in the city and so I indulged in some David Jones hot cross buns.  On the same day E bought some choc chip hot cross buns from Bakers Delight.  But I still felt it wasn't right not to have home made.  And I had promised Sylvia we would bake some. 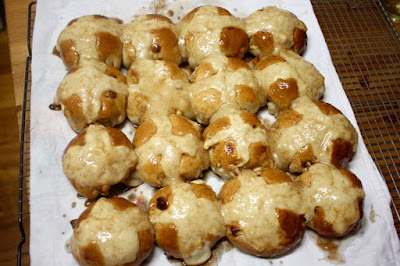 On Wednesday evening after work I set to baking a batch of yeasted hot cross buns with dried apple instead of sultanas.  This is the hot cross bun recipe I have made for years and it works wonderfully.  I kneaded the dough while my brother was visiting and watched it rise high above the mixing bowl.  The rising was not quite as rapid as I have would have liked.  The buns came out of the oven at 10 so it was a late night for Sylvia.  I had promised she could help.  Ah well, it was the school holidays. 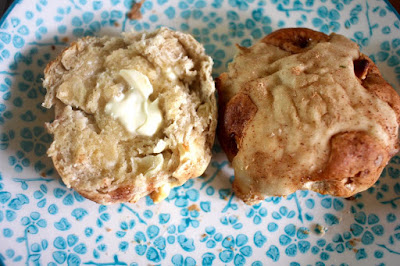 I enjoyed these hot cross buns but I found the dried apple a bit bland compared to the usual dried fruit I put in my buns.  (For the record, I like dried peel and occasional glace cherry in my buns.)  Sylvia enjoyed the plainness of the buns, though I think would have been happier with no fruit at all.  That just seems wrong.  I had tried to convince her to do dried apple and white chocolate but she refused.  Her favourite part of the buns was the thick chewy crosses. 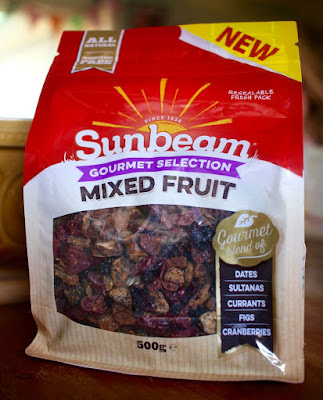 I had decided to bake another batch of hot cross buns on Good Friday (a public holiday here).  I don't use a lot of dried fruit in baking.  So I bought the smaller packet of Gourmet mixed fruit.  It is a mix of dates, sultanas, currants, figs and cranberries.  In fact Christmas and Easter are the times when I do most of my baking with dried fruit.  I still had some fruit mince leftover from Christmas.  It went into the hot cross bun mixture and was very pleased that it worked. 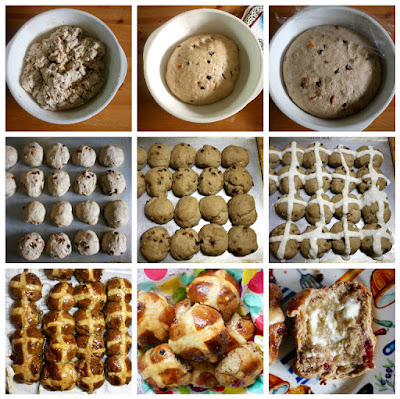 I took the sourdough hot cross buns recipe that I made last and modelled this year's recipe on it.  Last year I did a vegan recipe but this year, my mum brought me eggs just for the buns and so they needed to be used.  I added a mixture of fruit mince and dried fruit and tried to simply the steps in the recipe.  After making yeasted hot cross buns, I was concerned that the dough wasn't rising.  It didn't go over the edge of the bowl like the yeasted dough. 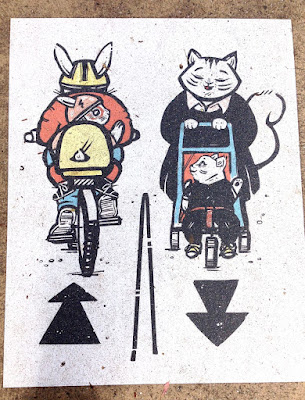 We went out for a walk along the train line while the dough rose.  I took my time but it still looked like there wasn't much lift.  I think it was 6-7 hours before I divided it into buns.  The result was really good.  Lovely soft crumb.

So perhaps next year I will just leave it overnight.  All I need is the energy to knead it.  And given that my usual overnight sourdough bread is no knead, perhaps I could get away with less kneading.  It is frustratingly slow progress on experimenting with this recipe because I don't make many hot cross buns each year. 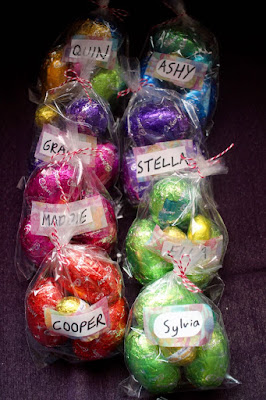 Once the hot cross buns were sorted, I could focus on other Easter activities.  On Saturday morning, I met a friend at the Boot Factory who had a 10% public holiday surcharge!  Then I bought some Easter eggs for nieces and nephews.  Sylvia packaged them up very nicely.  She told me that she put one bag together for herself as the dummy run. 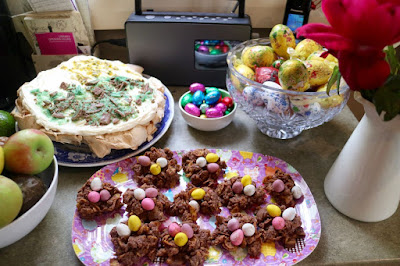 We went down to my parents house where we ate beetroot and goats cheese tart.  Sylvia had requested that we make Easter egg nests.  I agreed but when we tried to do it at home, the chocolate seized.  So we tried again at my parents' place.  Sylvia asked for milk chocolate rather than dark and it was so so sweet.  Surprisingly they were gone by the end of Sunday.  At least we finished up the end of the packet of cornflakes. 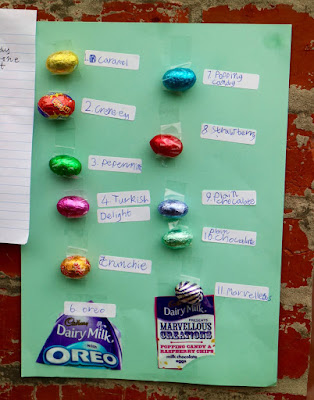 My dad loves organising the Easter egg hunt for his grandkids.  This year he bought 11 different types of mini eggs and directed the kids that they were to find one of each type each.  If they found more than one, they could share with others.  My mum says she found quite a few eggs in the garden after last year's hunt.  I think there were one or two oreo eggs left this year. 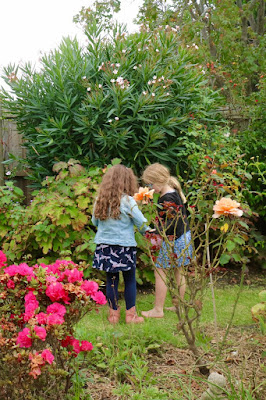 Sylvia and her cousin, Ashy, had such a great time on the Easter egg hunt that they organised a few more hunts for each other later in the afternoon when other kids had left.  Before then we had an Easter Sunday roast dinner.  I made a nut roast, which was nice but not my best one.  My mum made a lovely pumpkin, goats cheese and sage salad as well as the usual roast potatoes, cauliflower cheese and peas. 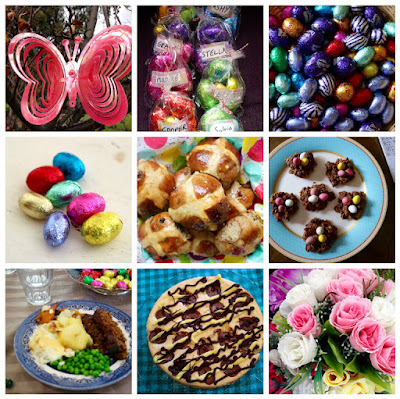 For dessert, there was pavlova, Easter egg nests, and a Creme Egg cheesecake.  I had to have a slice of the cheesecake and it was lovely.  Then I whiled away the afternoon with those who were left after my dad and brother headed out to the footy.  I enjoyed some cups of tea, mini eggs and a hot cross bun and a trip to the garden store before driving home to watch Roald Dahl's Revolting Rhymes.  A fantastic way to finish a festive weekend.

For more Easter ideas, check out my round up of Easter recipes.

Put all ingredients into bowl except salt
Rest covered for 30 minutes.
Stir in salt.

Knead 10 minutes until smooth and elastic.  I needed to keep flouring the board as it was quite sticky.
Cover and rest 6-7 hours or overnight.  It will rise but not double in size.


Preheat oven to 220 C about 30 minutes before baking.
Mix flour and water into the paste to make crosses.
Spoon paste into ziplock bag and snip tiny piece of corner.
Pipe lines of paste across centres of buns to make crosses (I like them thick).

Bake 30 to 35 minutes until buns are golden brown and hollow when tapped.
Five minutes before buns are cooked, simmer glaze without stirring for 5-10 minutes.
Place buns on an old teatowel on a wire rack, crosses facing up.
Brush ALL glaze on hot buns.  It can take a lot of brushing, depending on how long the glaze simmers.

Keep in an airtight container for 2-3 days or store in the freezer.
Can reheat at 180 C for 10 minutes (from room temperature) or 15 minutes (from frozen).

*NOTES: to make these buns vegan like my previous batch, take out the egg and add in 1 tbsp chia seeds and 3 tbsp water., then substitute 25g each of tapioca flour and cornflour for some of the flour.  I usually simmer my glaze for 2 or 3 minutes but forgot and did it for 10 minutes.  It was darker and thicker but meant there was less to brush onto the hot cross buns so it was quicker.  As I noted in the post, the dough does not rise nearly as much as the yeast ones I make.  Also the buns take a lot longer to cook than the yeast ones.

On the Stereo:
Word Gets Around: Stereophonics
Posted by Johanna GGG at 23:27