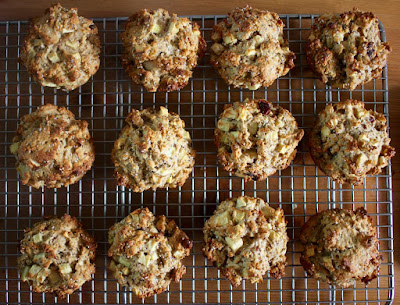 Lately I have been baking more than I have for a long time.  It may be that I have finally recovered from the festive season or just the demands of more hours and more riding to and from work with my new job.  Last week I baked 3 batches of muffins.  Three!  One of these was a batch of apple date and chia seed muffins which were excellent. 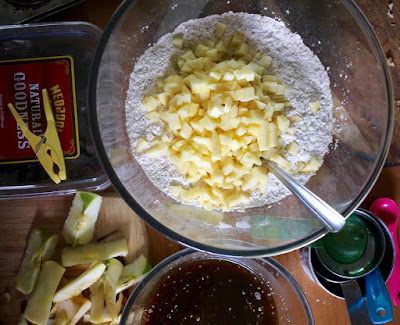 One reason I made the muffins is that it is apple season but all apples are not created equal.  Some are crisp and crunchy.  Others are mealy and meh.  I had a few of the latter to use up and decided on muffins.  I baked them between coffee with my friend Kathleen and my book club.  I found an apple and pecan muffin recipe in the Joy of Vegan Baking.  I had to work out the recipe to suit my kitchen.  No pecans but lots of dates and a vague memory of seeing chia seeds in muffins recently. 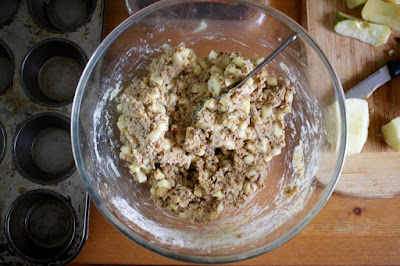 It was rather peaceful baking them.  E was pottering about with his ukulele and secateurs; not both at one, mind you.  Sylvia was on the lounge rug sorting out her textas (or markers). She occasionally came over for a piece of apple as I chopped them.  There is a great article in the Huffington Post titled "Psychologists explain the benefits of baking for other people".  I like that they describe baking as a form of mindfulness.  Sometimes it feels like a mad rush and other times it is indeed a relaxing way to slow down.  It felt good to bake these muffins. 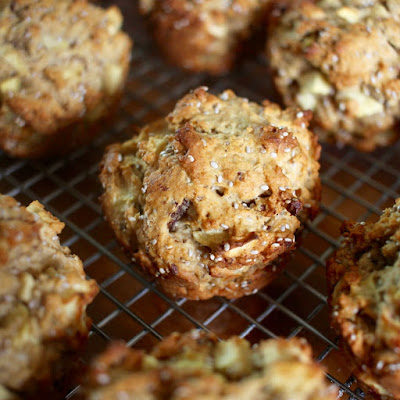 It also felt good to eat these muffins.  The batter seems incredibly thick but the resulting muffins are lovely and soft.  The apples were soft and juicy.  The chia seeds gave some interesting texture.  They were quite sweet so I might reduce the sugar next time.  But they were something I was proud to contribute to book club and a nice work snack.

I am sending these muffins to Simple and In Season run by Feeding Boys, and Treat Petite run by the Baking Explorer and Cakeyboi.

Mix dates, boiling water, maple syrup and ground linseed in a small bowl and set aside.

Toss together flours, baking powder, cinnamon and salt in a large bowl.

Stir oil, sugar and vanilla into date mixture to make a thick syrupy mixture.  Pour into flour mixure and mix until combined.

Stir apples and chia seeds into batter.  It will be quite stiff but you can add 1-2 tbsp of water if you need to loosen it a little.

Spoon batter into muffin cups.  Bake for about 20 minutes or until golden brown and a skewer inserted in the middle comes out clean.

Cool on a wire rack and keep in an airtight container for about 3 days.

On the Stereo:
The Captain: Kasey Chambers
Posted by Johanna GGG at 22:59