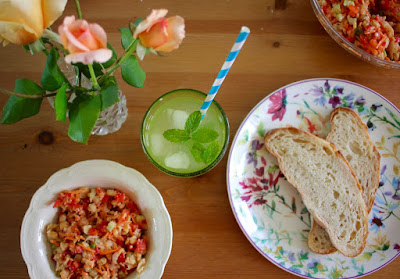 Today marked the end of the summer school holidays.  We spent the day traipsing around the shops for new school dresses and a new ipad.  (Can you believe that Grade 3s require ipads at Sylvia's school).  But before Term 1 starts and we get back into routine, I wanted to write a little about the holidays, complete with lashings of ginger beer! 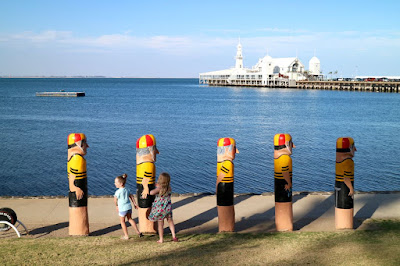 At the start of the holidays, with no plans to go away, it seemed that there was oodles of time.  It is hard to believe that the holidays have passed in the blink of an eye.  Sylvia had a few play dates, a dentist visit and sleepovers at my parents, I did quite a bit of paid work and caught up with a few friends.

I enjoyed a few visits to family in Geelong.  This was my opportunity to get to the beach.  One evening at Western Beach it was fish and chips from King George Fish and Grill which did excellent chips and potato cakes.  We left the first place because at 6pm they had run out of potato cakes.

On another occasion we went to Torquay Front Beach with my nephew, niece and sister-in-law.  We watched the helicopters circling overhead and the water emptying of swimmers with caution.  The lifesavers weren't emptying the beach at nearby Cosy Corner.  But we were not surprised when my brother phoned to let us know there was a shark at the Back Beach.  That day I also got sunburnt and slow traffic past a grass fire.  Sharks, sunburn and fires seemed to tick all the hazards of an Aussie summer! 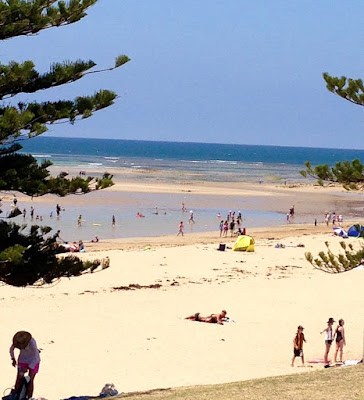 I missed the quiet of a holiday house to relax with a good book.  Yet we managed some reading at home.  I read Hannah Kent's The Good People which was a grim but fascinating story of poverty and pagan traditions in pre-famine Ireland.  It was cheering to follow it with Judith Will's wonderfully titled Keith Moon Stole My Lipstick.  It was a fun memoir about her working and meeting celebrities at a pop magazine in the 1960s and 1970s.  I also enjoyed reading Sylvia A Most Magical Girl by Karen Foxlee. 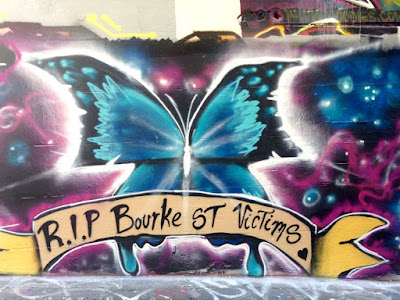 In the news we had the local horror of a man driving down with nurderous intent through the Bourke Street pedestrian mall in Melbourne; the national scandal of politicians travel rorts; the sorry state of USA politics as Trump took up his post as president and continued to show a stunning lack of empathy; and the ups and downs in the Australian Open tennis championships. 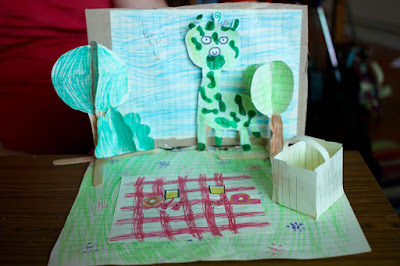 Spending more time at home than over the last few summers, meant we got to do more about the house.  We painted the backyard mural and spent some time on small improvements to Sylvia's room.  It also meant more time for card games, board games, and for Sylvia to potter about.  I really loved this little picnic scene she created for a green giraffe. 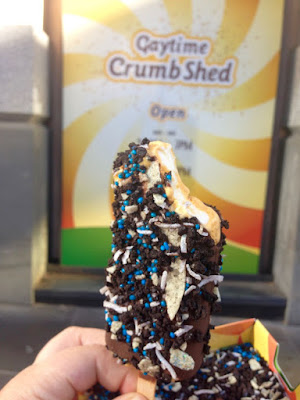 We didn't get out and about as much as I had intended.  We were just too busy most of the time.  I will share more about Moonlight Cinema and The Queen Vic Night Market soon.  I was very excited to be able to visit the Golden Gaytime Crumb Shed in the city.  I still haven't got over my childhood love of Golden Gaytimes.  At the crumb shed they were doing fancy versions and I had a Crumb Choc Millionaire coated with chocolate crumb, smashed potato crisps, desiccated coconut, blue sprinkles, and edible glitter.  It was really good. 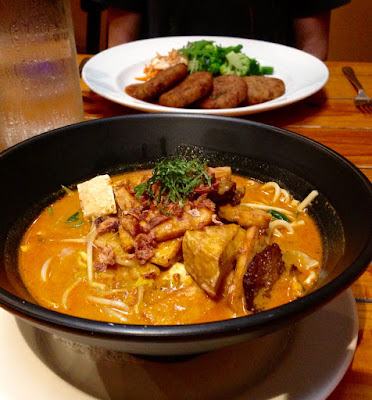 Last night I went to see Edge of Seventeen at the cinema with a friend.  It was a good angsty teen drama (complete with boy next to me in cinema with body odour to really give that teen experience).  We had actually intended to see Lion but it was sold out.  So I ate laksa at Shakahari while we waited to see a later movie.  Other films we saw over the holidays at the cinema were La La Land, Sing and Ballerina.  All lots of fun. 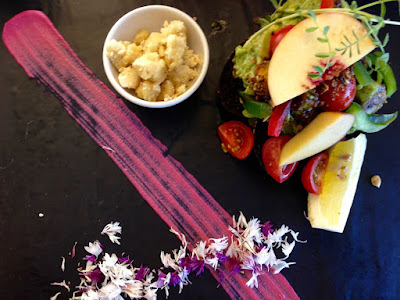 We did get along to quite a few cafes.  Today Sylvia and I saw out the holidays with a visit to the Glass Den.  I just loved the pretty Peach and Avo Bruschetta (lime and lemongrass avocado, with peach, mint heirloom capsicum, cherry tomatoes, baby mizuna, beetroot hummus and almond feta served on crisp charcoal loaf).  It is the most memorable meal of the holidays.

I also enjoyed a vegan meatball sub at Mr Nice Guy, the Golden Gaytime Deth Shake at Curators Collective, tacos at The Snug, and waffles at the Boot Factory.  And a few stops for inari at sushi shops with Sylvia. 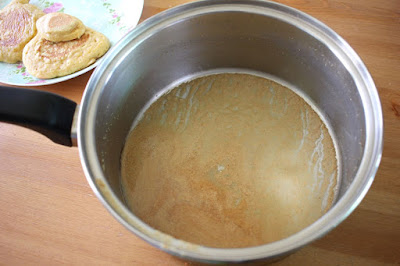 January was not a good month for posting recipes.  I didn't cook anything for Burns Night or Australia Day this year.  I made some really nice food (and will share some when I write up my next In My Kitchen post), tried some recipes from But I Will Never Go Vegan, but it was not a month that was memorable for making amazing recipes to share.

Given we were very busy, it is no surprise that one recipe I really loved was a simple one.  This ginger beer recipe was in a supermarket magazine. It appealed because it didn't need to sit around for ages or to be strained.  It was just a matter of mixing everything together and pouring it into a bottle the next day, minus the sludge at the bottom. 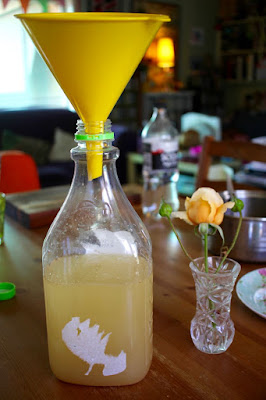 The result was really good.  I was surprised how these simple ingredients list resulted in a taste like Bundaberg ginger beer.  (Not like ginger ale which I prefer and is a little less sweet.)  We had it with lunch and felt quite fancy.

The main change I would like would be to add less water so I could make up half ginger beer and half soda water for fizziness.  My mum tells me you just need to ferment it for fizziness.  I don't have the room for storing bottles that may explode.  Not even under the bed, which my mum tells me is traditional.  I also wondered about some extra spices, given how much I love the Christmas spiced Bundaberg ginger beer. 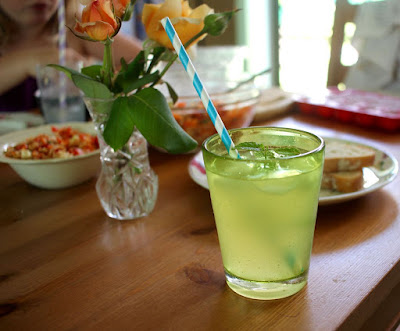 For now I have ticked another recipe off my to do list.  I still feel terribly behind but there is so much to do and so little time.  Just in case you have some time, I leave you with some of the holiday reading I had found enjoyable and/or interesting:

Place all ingredients in large saucepan, cover loosely and leave over night at room temperature.  The next morning, skim off any, skim off any scum and pour into a bottle in fridge with at least 4cm space at the top (we used a 2 litre bottle and had plenty of room).  Discard the sediment at the bottom of the saucepan.  Store in the fridge.  Serve with ice blocks and mint leaves if desired.

*NOTES: next time I make this I might experiment with adding a bit more than half the water and then serving it with half ginger beer and half soda water to make it fizzy.

On the Stereo:
Remember Us to Life: Regina Spector
Posted by Johanna GGG at 23:27