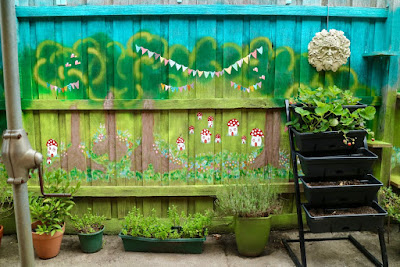 This summer's holiday project was painting a mural on our backyard wall.  It is something I have wanted to do for years and am most pleased to have finally done it.  And now that I have done it once, I might even do it again.  So for those of you who are interested, and for my records, here are my notes of what I did.

This was the largest canvas I ever worked with so it was quite a challenge.  I felt a real novice doing it and would probably do some of it differently if I did it again.  For example, I would not paint on a 37 C day because it required lots of sun cream and drinks and it was harder to work with the paint that dried quickly. 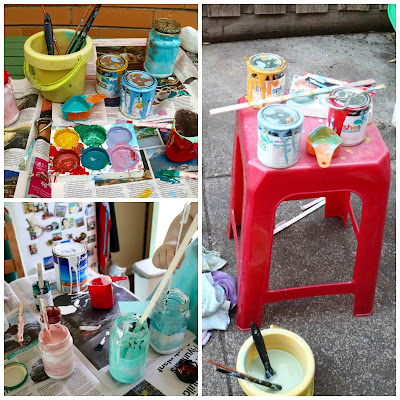 The first challenge was buying the paint.  We went to our local Bunnings hardware store four days in a row.  I was pleasantly surprised at how helpful the staff were.  I was less happy about my hands being quite paint splattered for a few days but most of it came off with soap and water.

Spray Paint
I knew I wanted to spray paint the background and paint more details with brushes.  Choosing spray paints was easy (once the staff unlocked the cage it is kept in).  In the end I think we used about 7 tins of Rustoleum.  This was a good quality oil based gloss spray paint that did about 4 x 4 metres per tin.  As our fence was quite old and soaked up a lot of paint, I think we needed more.  We were told it would be hard to paint over the gloss paint (matt paint was hard to find) and might need some sandpapering.  But it was never a problem, which might be due to the old wood.

Water based paint
For the more detailed painting we wanted lots of colours.  We chose exterior water based paint (ie washes out in water).  Firstly we choose three tints from the colour samples.  Then we purchased a litre of white paint, divided it into four jars, added tints to three and kept one white.  I was limited by sharing my choice with Sylvia (who had her own fireworks section of the wall).  The colours were lighter than I wanted but in the ended looked better than deeper colours.  For more colour options, we bought some pots of primary colours in White Knight Splashes water based enamel paint.  We them did lots of mixing these to increase the palate of colours greatly.  The two colours I really missed were a dark brown and a dark blue or green.  We got by.  At one point, a friend came and helped me mix a dark green using a few of our kids craft paints.

When I did a quick tally, I worked out that we spent close to $200 on paints.  Ouch!  We still have a few half pots of paints. 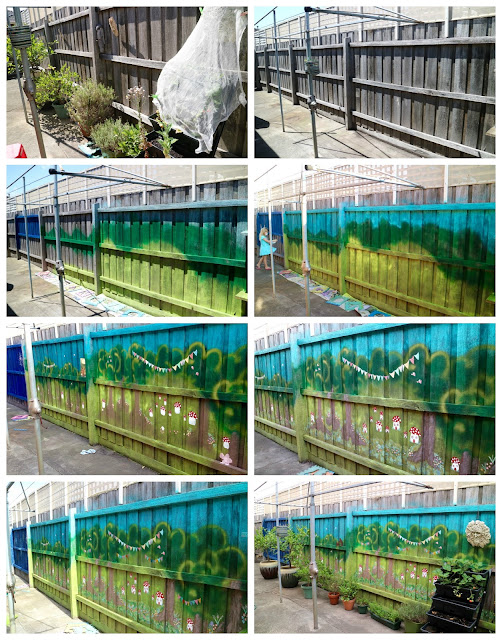 Above is a step by step pictorial of painting the fence.

As you can see, the first job was to clear the plants and sweep the concrete clean.  This was great because it is a big job that does not get done often enough.  As you will see in one of the pictures, Sylvia helped with spray painting and doing some of the details, especially the fairy toadstool houses.

In the first picture of the painting, you might notice a very pale blue spray.  It was so pale that we went back and purchased another brighter blue colour that was far more obvious and pleasing.  Generally I think using spray paint for the background saved us a lot of time.  Though I did get a sore finger from pushing the nozzle.  We used face masks when spray painting but no gloves so I got a little on my finger.  (Maybe gloves next time!)  Old clothes were a must too!

I spray painted some vague dark green tree shapes and then gave them more shape with the lime green paint.  Sylvia was unhappy with the lime green looking so yellow in the bottom section but in the end I think it was ok.  When my friend came to help she would have liked to give more shape to the tree tops.  Like me she didn't have the time or the right coloured paints to do it. 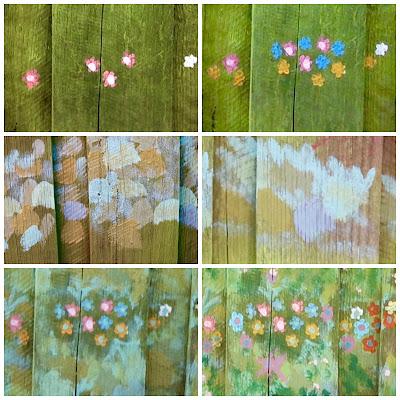 And while I would have liked more texture in the tree tops, I was happy to get some texture around the bottom of the trees where the grass and flowers were.  In an ideal world I would have done all the grass and then added flowers.  However, like the bunting, I added flowers as I mixed different colours.  Above you can see that there was a lot of layering.  I really enjoying being able to layer to add texture - a technique I have not used before. 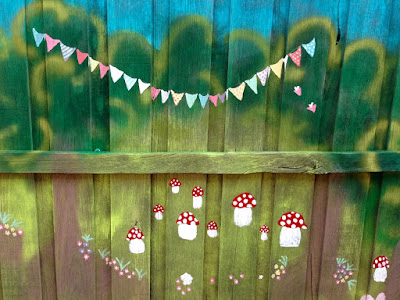 I looked at pictures online and even did a prelim sketch to get an idea of what I was doing.  Sylvia brought me out her Shirley Barber fairy book.  I wish I could paint like that!.  Sylvia enjoyed helping out with the toadstool houses. 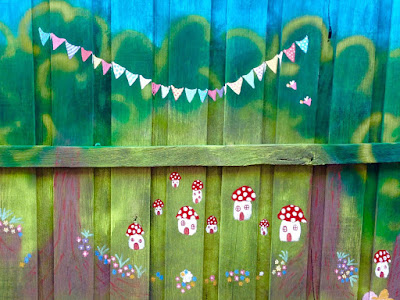 I firstly did the light-coloured longer strings of bunting and felt they were too light.  Then I did some darker smaller strings and realised that the lighter ones were far more visible.  I did the string by painting a line of dots where the top of each triangle should be and adding triangles when I had mixed different colours. 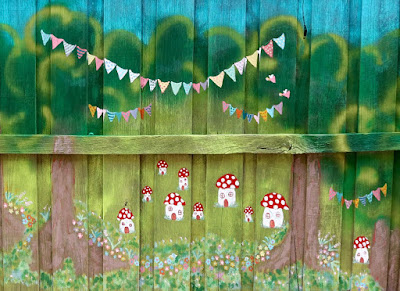 I had trouble mixing the right greens and it was only when my friend mixed a darker green with craft paints that I was happy with it.  I probably should have gone back and got a darker blue but I was trying to make do with what we had. 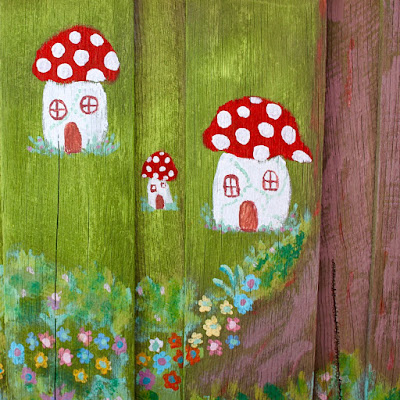 A small brush was used for the toadstool houses, fairies, bunting, and  flowers.  I wonder if I should have painted bigger details but it felt right to keep the fairy village small.  Even on this photo you can hardly see the details of the grass and little dots of flowers around the toadstool houses.  But when you actually are in the yard, you see the details. Ditto for the little fairies flying through the air. 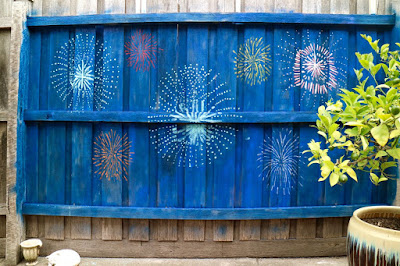 While my dream was a little fairy village, Sylvia's was fireworks.  As with the bunting, I think that lighter colours worked better.  I helped with this section of wall but it was done under Sylvia's direction as she had her vision. 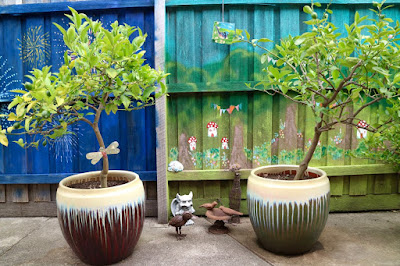 One of the issues when painting the fence was that I knew once the plants returned, some of the painting would be covered up - though I also knew that it would be fine to have pictures peeking around the plants.  I took this into account and had the fairy village in an area I knew would have the mint in front of it in small pots. 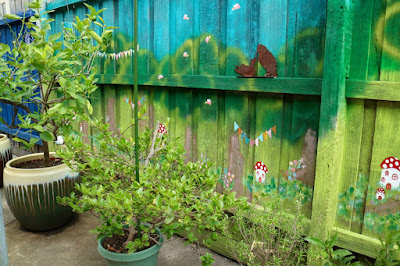 Once everything returned to its place, it still looks good.  I was pleased to have a place to feature the rusty sculpture of the mother bird feeding it's chick (above).  It was a present from my sister and had been hard to see against the grey wood.

We have had a few rainy days since the mural was finished and it did not wash off.  Phew!  Now I just have to hope the fence doesn't fall over.  It is getting pretty old; we could feel some planks were a little loose when we were painting. 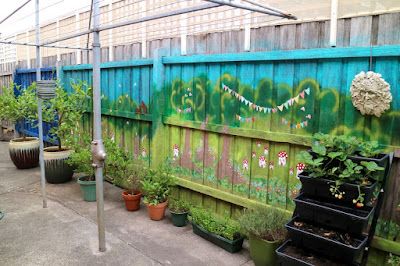 It was really hard to decide when it was finished.  I could have kept going with layers and details and retouches.  But after a week (with a few breaks) I could not justify any more time on it.  So the plants were moved back.  I still dream of some little tweaks.  Maybe one day.  I still would love a giraffe somewhere!  But now my dreams have moved on to Stage Two of back yard beautification: astro turf.  When I regather my energy.  Meanwhile I am enjoying spending time in the backyard, even if it is just hanging out the washing.


Disclaimer: I have noted some of the brands of paints as a reminder but I paid for my own paints and do not have any affiliations with the companies.
Posted by Johanna GGG at 22:02