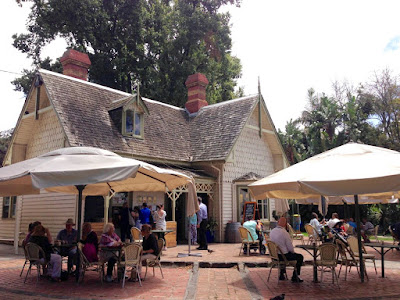 "The pigeons stole our gaytime deth shake!" I texted E as we were having lunch at Curators Collective in Moonee Ponds.  Honestly, you couldn't make it up!  And when you saw how cute the cottage is, you would not expect such things of lunch.  I am happy to report that, pigeons aside, it was a really nice place to stop for lunch. 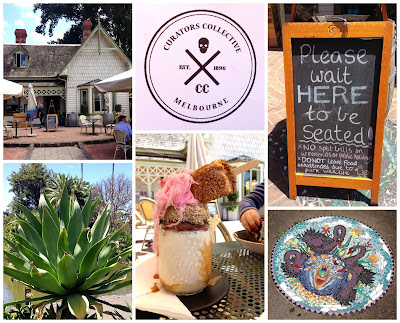 We had first gone there the previous week with a friend and her kids.  As we had arrived we had been shocked to see two little girls sitting at a table watching a pigeon pecking at the lunch their mother had walked away from.  But we had not had any birds too close to use.

Soon we were seated at a shady table.  The service was friendly with our waitress making sure there were enough chairs.  Sylvia was excited to see waffles on the menu, I wanted something savoury and Kathleen's son was off finding turtles in the nearby lake.  There was something for everyone and we all enjoyed their meals. 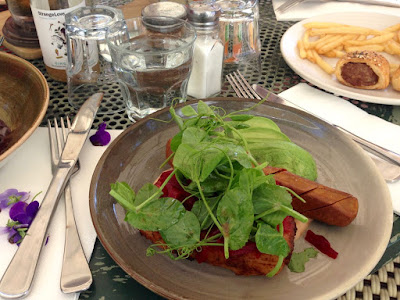 I ordered the Fat HashBrown, which was a potato and caramelised onion hashbrown served with chipotle mayo, pickled beetroot, poached eggs and pea tendril salad.  However I asked for the vegan version and instead of the egg I had a vegetarian sausage and half an avocado.  It was very satisfying.  I really loved the hashbrown with the beetroot pickle.  It had great flavour, even though the hashbrown softened under the pickle.  And there was plenty of healthy greenery. 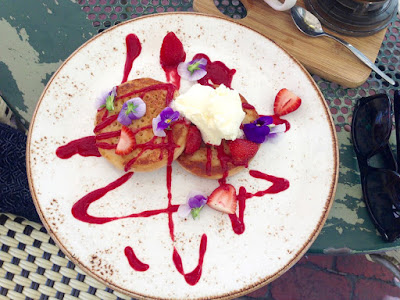 Kathleen chose Dr Marty's Crumpets which came with strawberries, icecream and strawberry sauce.  They were pretty to look at and she was very happy with her choice.  She also ordered a tea.  When it came she was told to sit the infuser teapot over her cup and count to three - no more as the tea came out quickly.  She counted a little slowly and her cup was brimming over.  It was a slightly tricky sort of teapot - fun but not intuitive.  We decided the cups needed to be glass so you could see them filling up. 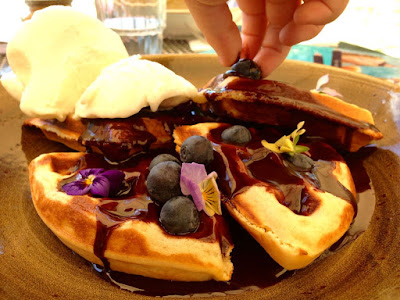 Sylvia zoomed in on the waffles topped with Nutella chocolate sauce, blueberries, vanilla ice cream and chocolate soil.  She was swooning over them and not inclined to share much.  We loved them so much that when passing by a week later we stopped there and she ordered the waffles again.  This time I got more of a look in and agreed that the chocolate sauce was very good. 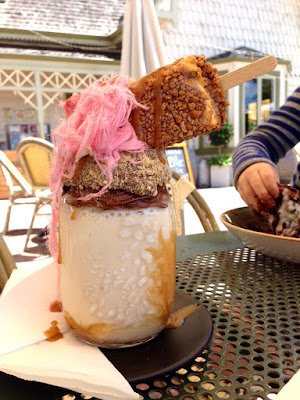 My hesitations were that I know I am no fan of caramel milkshakes.  Even chocolate milkshakes are usually a bit milky but caramel are way too milky for me.  And really either an ice cream or a milkshake is more than enough.  But it was a Golden Gaytime.  So I ordered it.  And went to get a spoon for Sylvia. 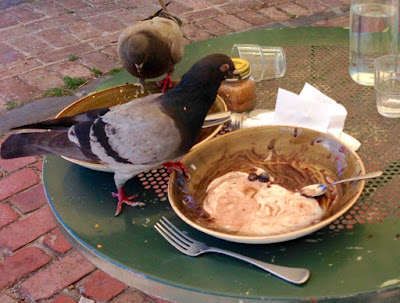 As I was waiting for service, the waitress said she had to rescue a little girl from the pigeons.  I turned to see those blooming pigeons pecking away at the end of my golden gaytime that I had placed on the top of the jar.  The waitress sprayed water on the pigeons to shoo them away and left the water with us in case they came back.  (Surely this is not what they meant in the commercials that claimed "it's so hard to have a gaytime on your own".)

Luckily I had eaten a little of my gaytime already.  When I decided just to cut off a big wedge of end that the pigeons had eaten, Sylvia told me they had pecked all around it!  Argh!  She had already eaten my fairy floss.  So we ate the biscuit crumbed chocolate around the top of the jar, which was nutella and very nice.  But I sort of lost interest in the shake.

The above photo of the pigeons in our plates was taken after we left the table when they were there before you could say Gaytime deth shake! 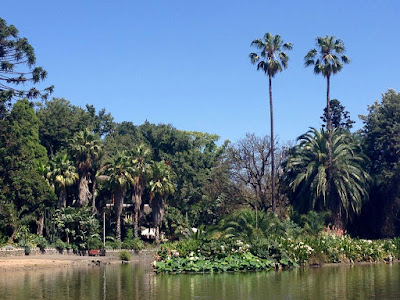 The pigeons are the downside of eating in the middle of the park.  The upside is that it is a really pretty location with lots of lovely plants and mosaics and the lake to walk around.  On the other side of the lake is a good wooden park.  It was really busy in the school holidays.  We have been on other occasions when it wasn't quite so busy.  (We visited the cafe back in 2011 when it was called Oliver's Garden Cafe.) 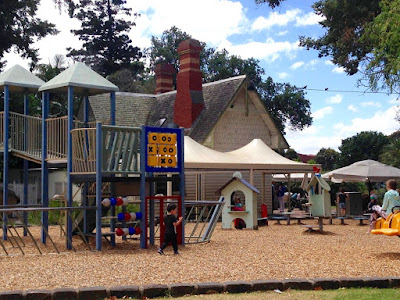 As well as the park over the other side of the lake, there is a toddler's playground by the side of the cafe.  No wonder there are so many families.  There is also a window for takeaway food.  I know they sell ice creams but can't remember what else.  And there is seating inside for the cooler months.  If you want a lunch, there is a vegan burger that looks good.  The place is not cheap but it does some interesting food and is in a great location for families.