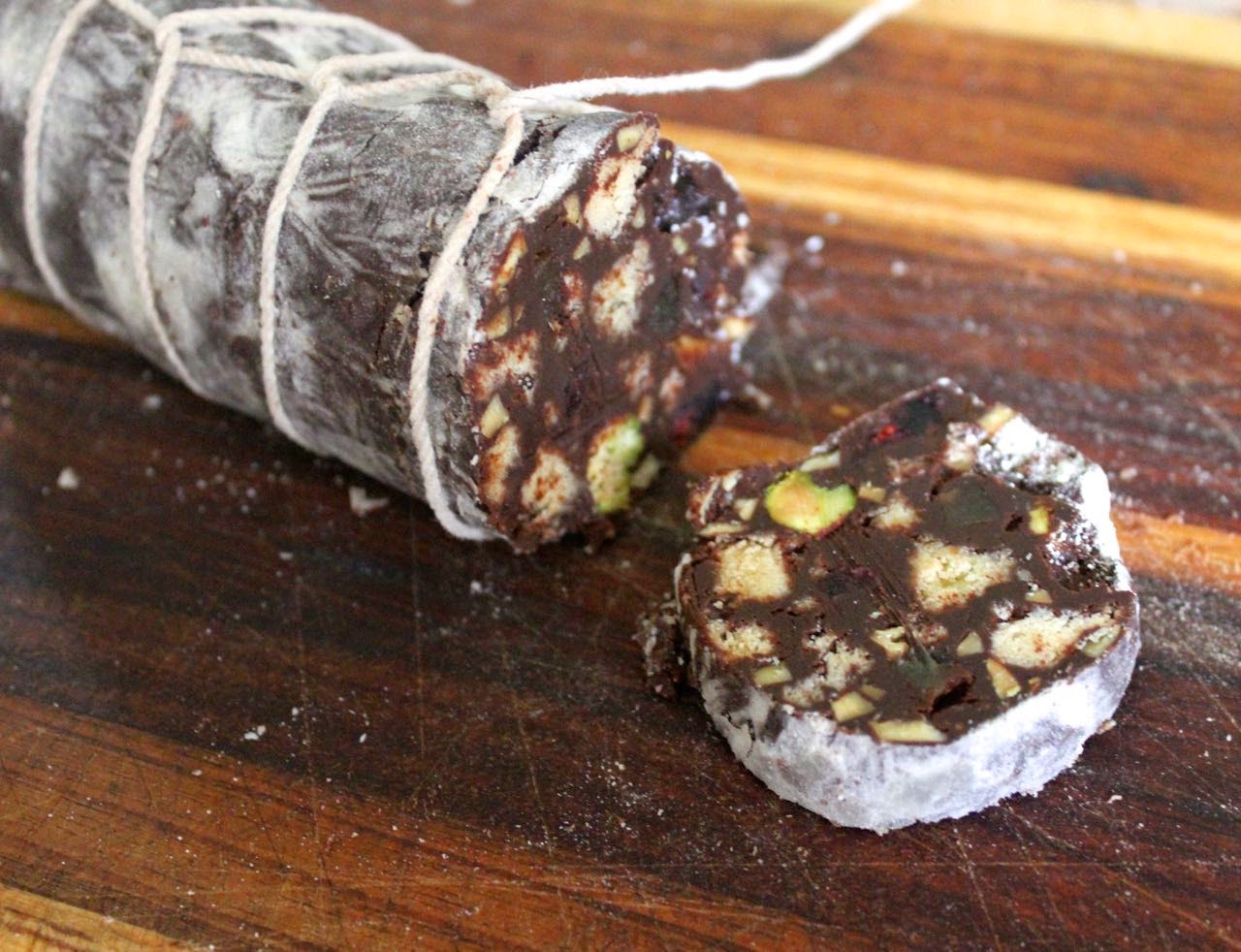 A few days before Christmas I saw two of my favourite bloggers post a recipe for Chocolate Salami on the same day.  Hence while shopping at the supermarket, it suddenly seemed a great idea to make it for E as a Christmas present.  I looked up the recipe on my phone and added the ingredients to the trolley. 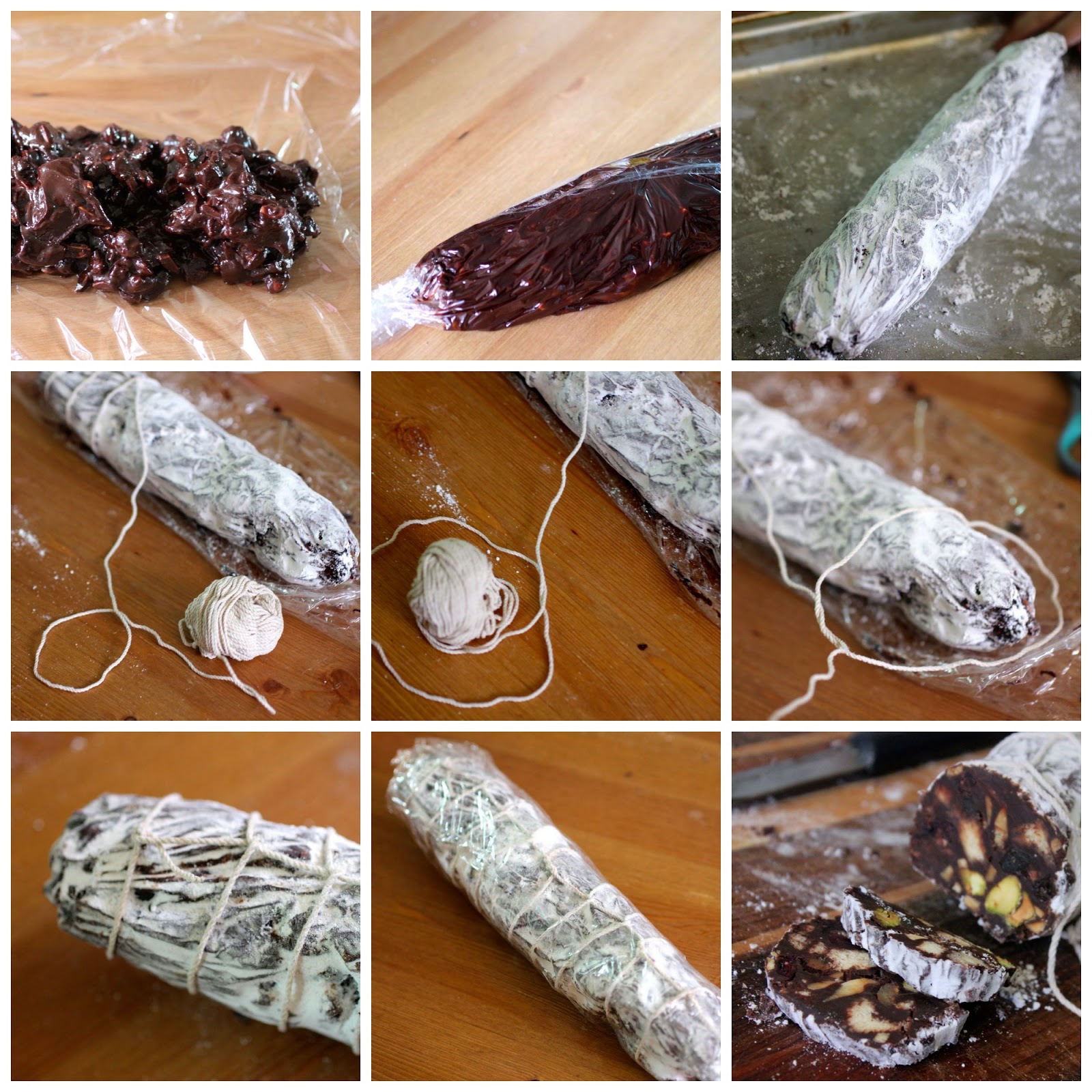 It appealed not just because it was full of yummy things, but also because it seemed quite easy to put together.  The most challenging moment was when I decided to tie on the string to make it look like a hung salami.  It took me a while to work out it was just a matter of looping a knot over the salami for each string loop.  Then it was easier but I still had to get the loops lined up neatly.

The string work was trickier because I had thought it would be a fun gift to make with Sylvia.  She got a bit distracted when it came to rubbing the icing sugar into the chocolate log.  It was sticky work with a small child helping out! 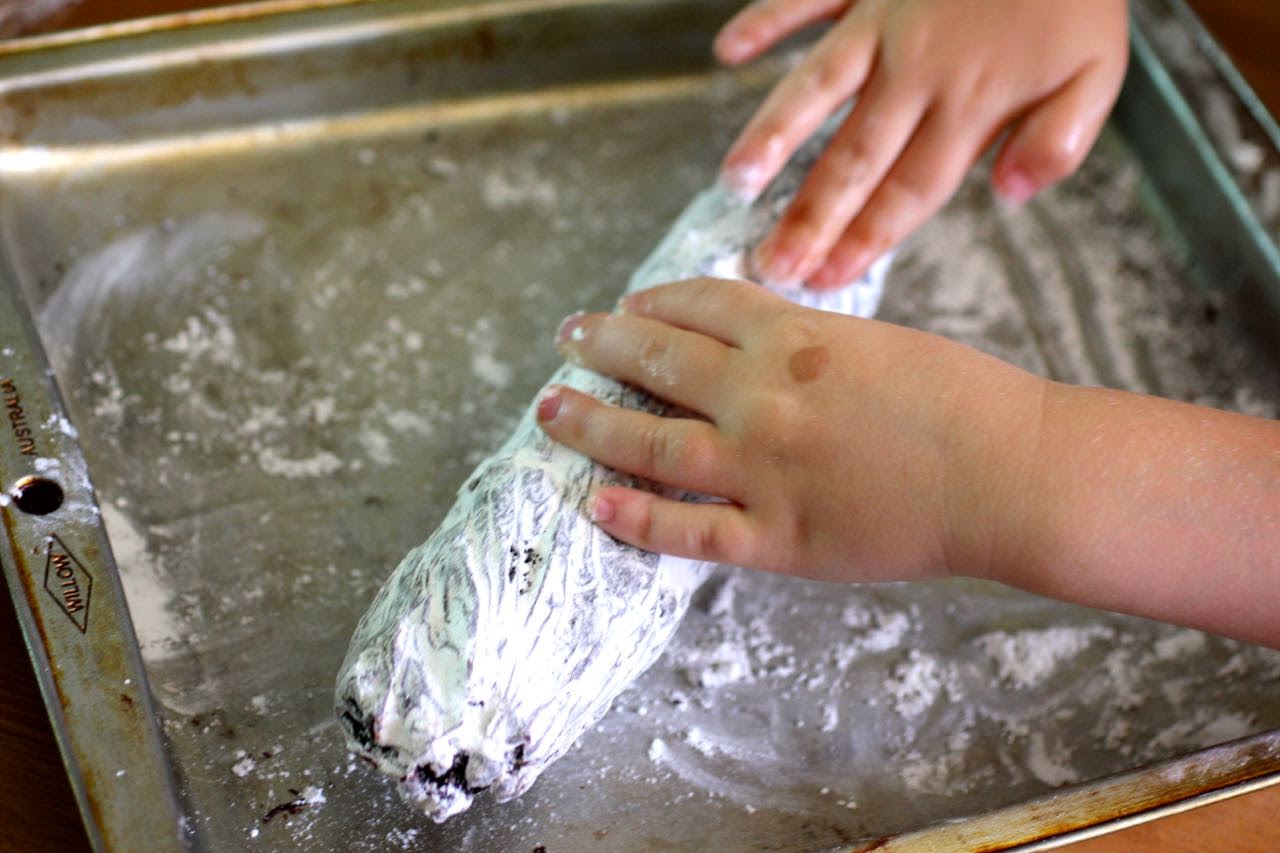 Explaining to Sylvia that we were making chocolate salami which was to look like meat but did not contain any meat was a little confusing.  She asked what salami was.  I didn't have any cultural references that she understands.  Yet once she understood it was a bit of fun, we shared a giggle at two vegetarians giving a meat-eater a meat-free piece of meat. 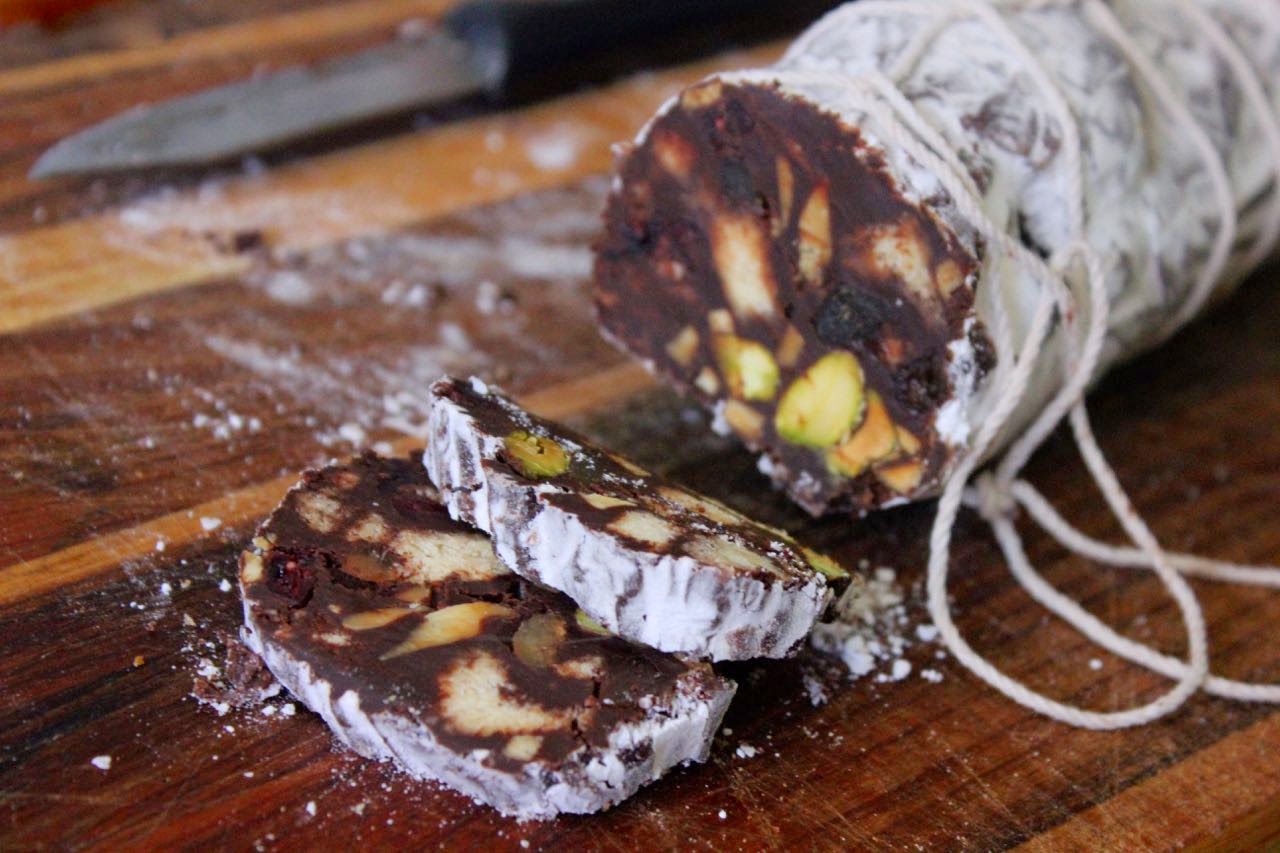 E was pleased with his gift - once he had ascertained it was not a blunt weapon!  He then asked where I had bought it.  Ahem, good sir, we made it with our own hands.  He was most impressed.  However I think I might have eaten more of it than him.

I really loved the rich chocolate studded with nuts, cranberries, ginger and shortbread.  It is very good with vanilla ice cream.  My mum loved it too and suggested some chilli would be good in it.  I would prefer orange zest.  The original recipe had booze in it but I wanted it to be child friendly.  It was so easy and so yummy that I can see this making it onto our list of gifts to make in future.

Chocolate salami
Adapted from Not Quite Nigella and A Travelling Cook

Melt chocolate and butter.  Mix in shortbread, nuts, cranberries and ginger.  Cool in the fridge for about 20 to 30 minutes.

Lay a large piece of clingfilm on the table and spoon out the cooled mixture in a chunky sausage shape.  Wrap in clingfilm, twisting the ends, and use your hands to smooth out the sausage through the plastic.

Chill in the fridge until hard.  We did ours overnight but I took it out once or twice as it was cooling and moulded the shape a little.

Once hard, unwrap, sprinkle with icing sugar (we did this over an oven tray) and rub along the sides to make it look like aged salami.  Tie string about the salami to give the look of salami that has been hanging.  (Knot a loop around one end.  Then make a knot and before you tighten it, loop it over the salami and tighten it with a little length of string running long the salami towards your loop.  Keep repeating until you get to the other end.  I found this a little fiddly but fun.)

Wrap and gift to friend or family.

*NOTES:
We used vegan chocolate and vegan margarine.  It would be quite easy to use vegan biscuits or even gluten free biscuits if your recipients has these dietary requirements.

The quantities are quite flexible, depending on taste and how big you want it.  I downsized Not Quite Nigella's recipe to make a smaller salami but used more shortbread, after seeing that A Travelling Cook used many more biscuits.

This chocolate salami can be kept in the fridge especially in a hot Australian summer.  However I prefer to eat at room temperature and it seems to keep well out of the fridge while the weather is mild.

On the Stereo:
Oz: Missy Higgins
Posted by Johanna GGG at 23:11