Lunchboxes - a reflection on a year of vegetarian school lunches 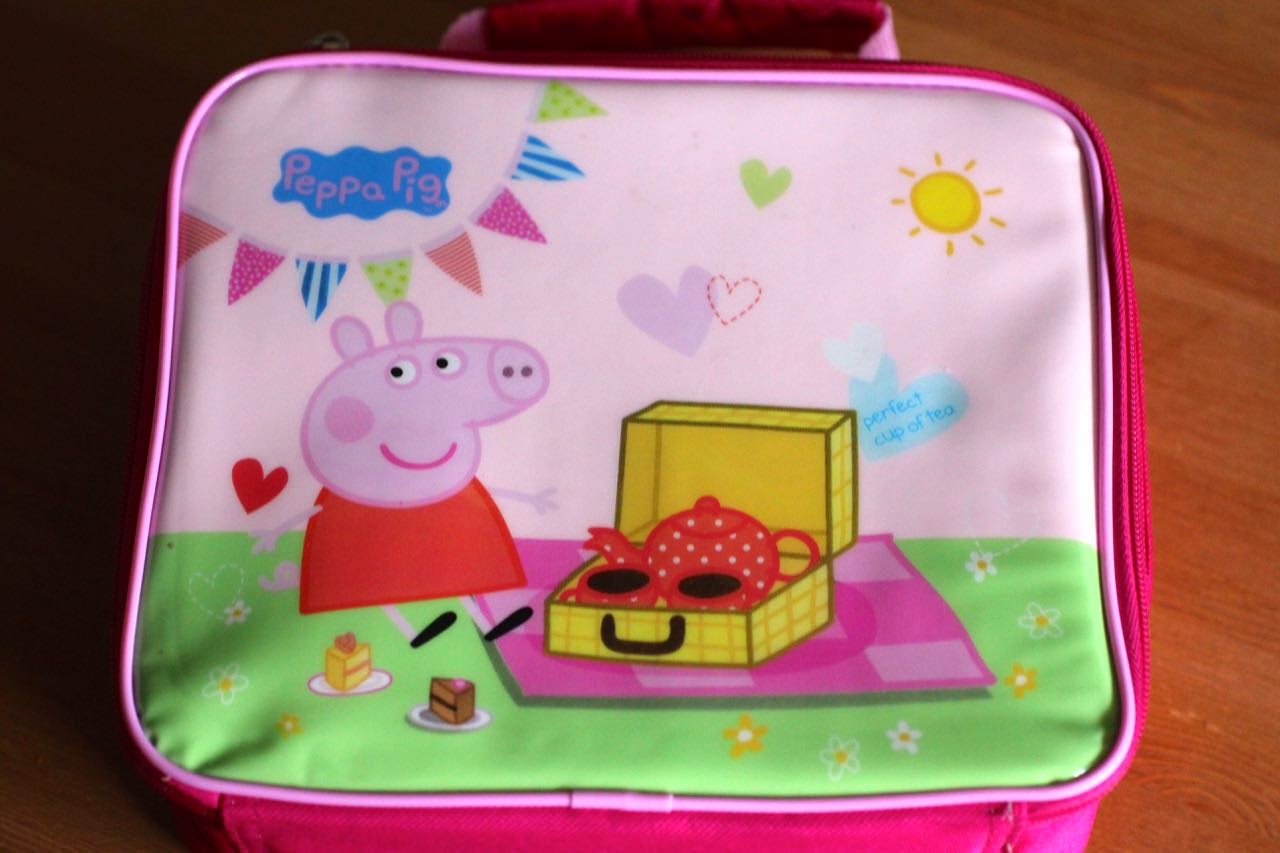 The Australian school year is almost over.  It seems like a good opportunity to reflect on Sylvia's lunchboxes over the year.  I have occasionally shared them but here is an overview.  Above is her trusty Pepper Pig lunchbox looking less shabby at the start of the year.   Below is her drink bottle.  They have accompanied Sylvia to school every day of her Prep year.  (That is the first year of primary school here.)

My primary school lunches:
We develop our expectations of food from our own experiences so let me tell you about my own primary school lunches.  I usually had sandwiches - german sausage and tomato sauce, vegemite and cheese or vegemite and walnuts - and some fruit and cake.  All wrapped in waxed paper.  (I really hated the waxed paper.)  Occasionally we put in lunch orders to a nearby milk bar for pies or pasties, chips (crisps) and flavoured milk.  It was a treat.  We also had cordial in our water bottles in the first few weeks of each year, which I loved.

What lunches are available for Sylvia at her school?
Like my school Sylvia does not have a canteen at school.  The only exception is that occasional canteen run by the Junior School Council, which sells popcorn, sultanas, zooper doopers and other healthyish) snacks.  However unlike my school, there is no lunch order service every day.  Lunch orders are only available on a few days.  They came from a nearby cafe offering sandwiches, sushi, dim sims, baked potatoes, spaghetti, fruit, flavoured milk and juice.

The lunchbox
When I bought the Peppa Pig lunchbox I found that our little tubs fitted neatly inside it.  It has been a good system.  Though there are mornings when they are hard to find.  I would like a bento box but never found one I liked and the tubs give me good flexibility.

The labels
I started writing Sylvia's name using permanent markers but they washed off quickly.  On my sister's recommendation (thanks Susie) I bought some name tags from Bright Star.  They have been fantastic.  They stay on for ages and we still have lots of them.

What did Sylvia eat?
From the start I would give Sylvia some protein, some vegetable, some sweet home baking, some fruit.  The lunchbox below was quite unusual because I didn't have fresh fruit and used dried fruit instead.  She always has water in her water bottle.

Sandwiches
At first Sylvia refused to eat sandwiches.  Sandwiches seem such standard lunchbox fare so I pushed her to eat them.  After all we regularly have home made bread in the house.  I remember the first day I put a sandwich in her lunchbox.  She screamed in outrage.  However she has come around.

Keep it plain
I sometimes feel guilty that her lunches are so boring and often the same but Sylvia likes to eat the same old thing.  (NB the photos in this post were taken when I thought there was something interesting to record.)  However I also see lots of recommendations for school lunches that seem incredibly fussy.  I would always put together lunch in the morning and some days it has been a mad rush.  I just don't have time for such fancy food.  Not to mention that it is often messy and hard to pack.

Portion size
When I first started to think about school lunches, I packed a lot more than I do now.  Even so, Sylvia often does not eat all her lunch at school.  We have a rule on this.  If she doesn't eat her lunch, she eats the leftovers before any other snacks after school.  Usually she does eat any leftovers before dinner.

Nut policy
Sylvia's school does not have a no nuts policy.  For months I mistakenly thought there was and I have more recently spoken to other parents who were under the impression there was.  Perhaps it is a hangover of the strict food policies at child care.  I have been told that it is impossible to enforce a no nuts policy because children bring their own lunches.  However there is a policy of no sharing food among kids.

Nutrition
I am not a nutritionist and do not claim to have made perfect lunches but I think they are ok, though probably too many sweet treats.  However I feel it is not too bad compared to the child care lunches she was served.  I would get annoyed at the lack of protein or the processed meat patties she got there.  It would be good to get more vegies into Sylvia's lunchbox.  She is slowly starting to eat more of our meals so that might give me more options next year.


What did you have for school lunches when you were at school?  What do your kids enjoy now or what would you like to pack for kids lunchboxes?
Posted by Johanna GGG at 20:05