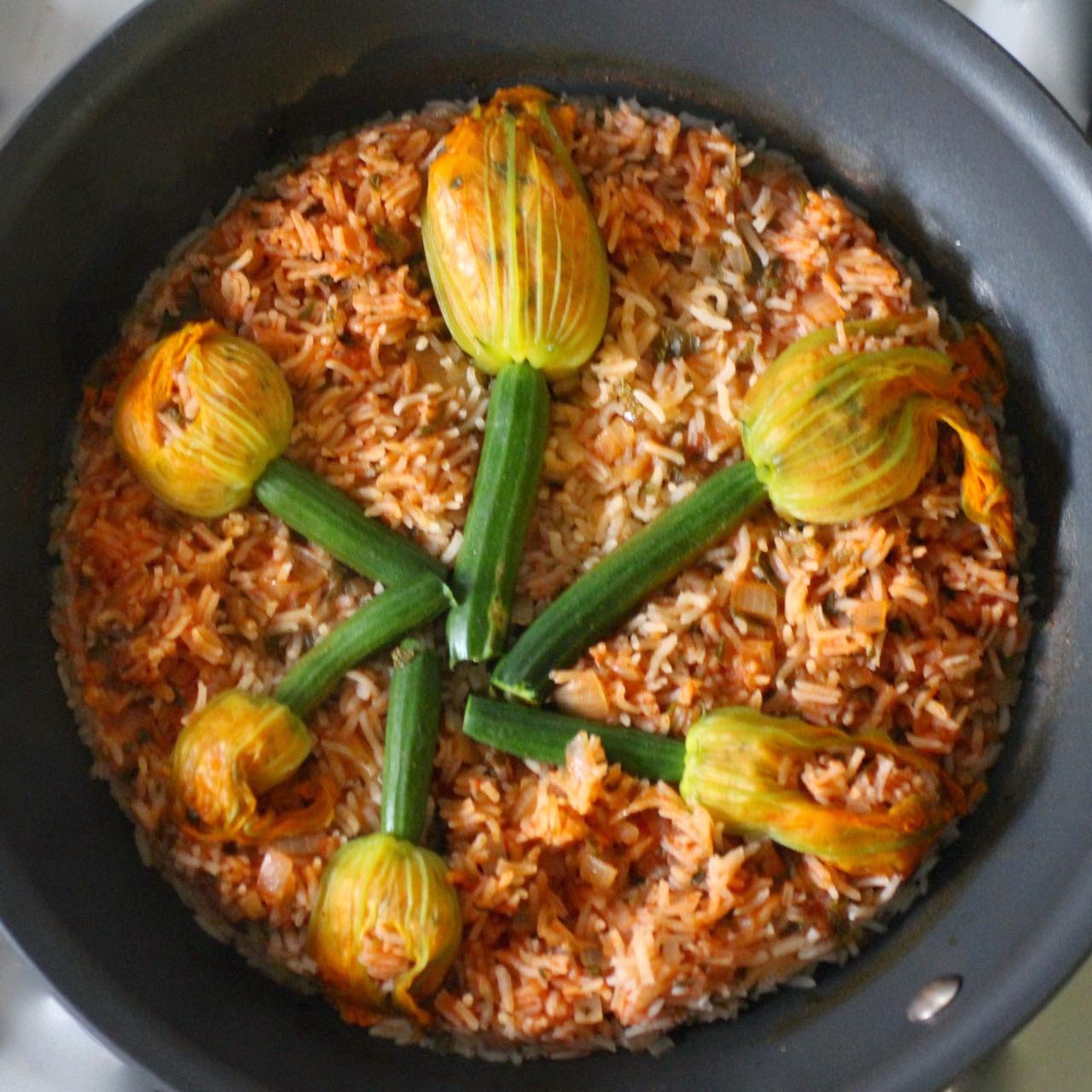 Aren't zucchini flowers exactly what every blogger dreams of in a vegetable!  They are photogenic and unusual and seasonal.  Of course I was excited to see them at Coburg Farmers Market.  Yet they are not really my sort of thing.  So ridiculously delicate and they love creamy fillings.

I gave them rice and miso harissa roasted pumpkin.  Perhaps the most successful part of the meal was the strawberry dumplings for dessert. 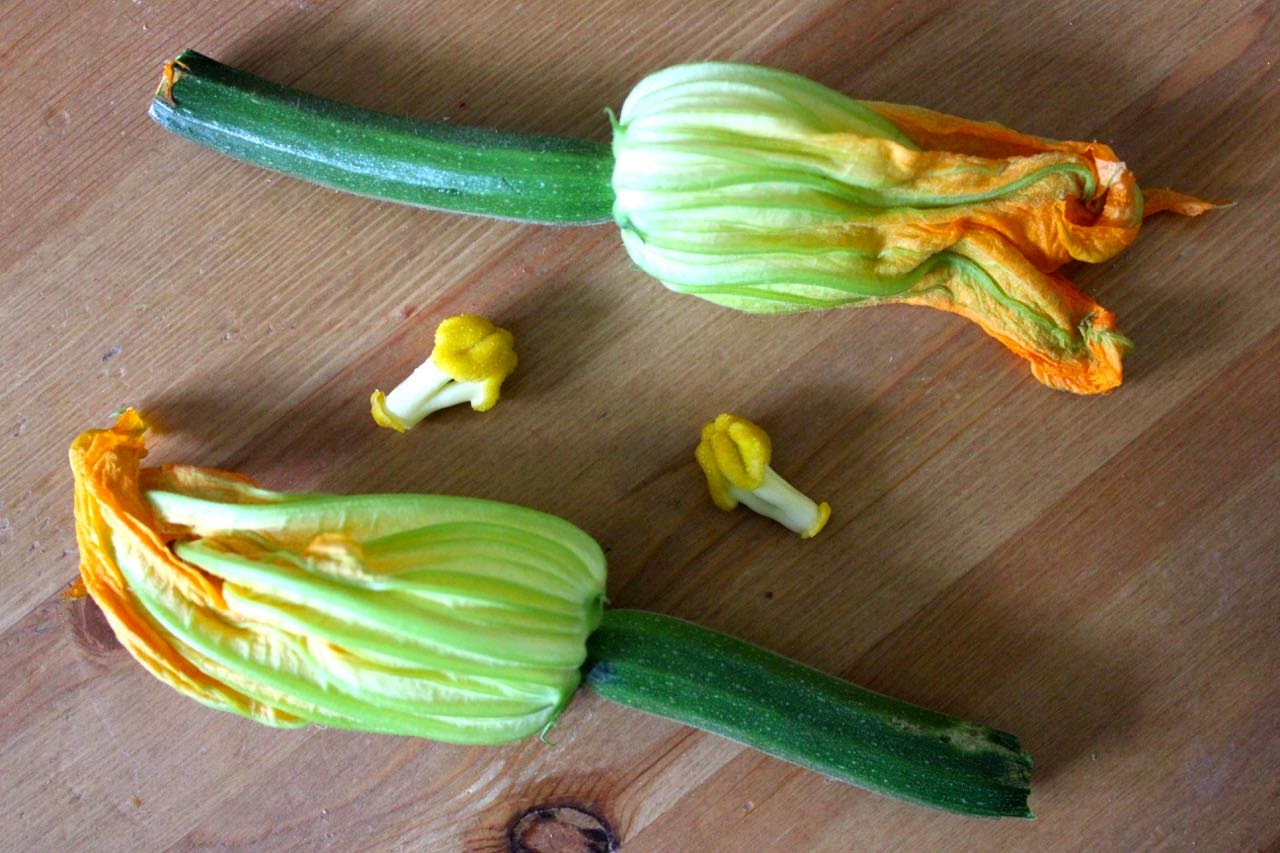 It was my first time cooking with zucchini flowers.  I did eat some at a cafe many years ago.  So I searched the net for ideas.  Here is a selection of some of the recipes I found: 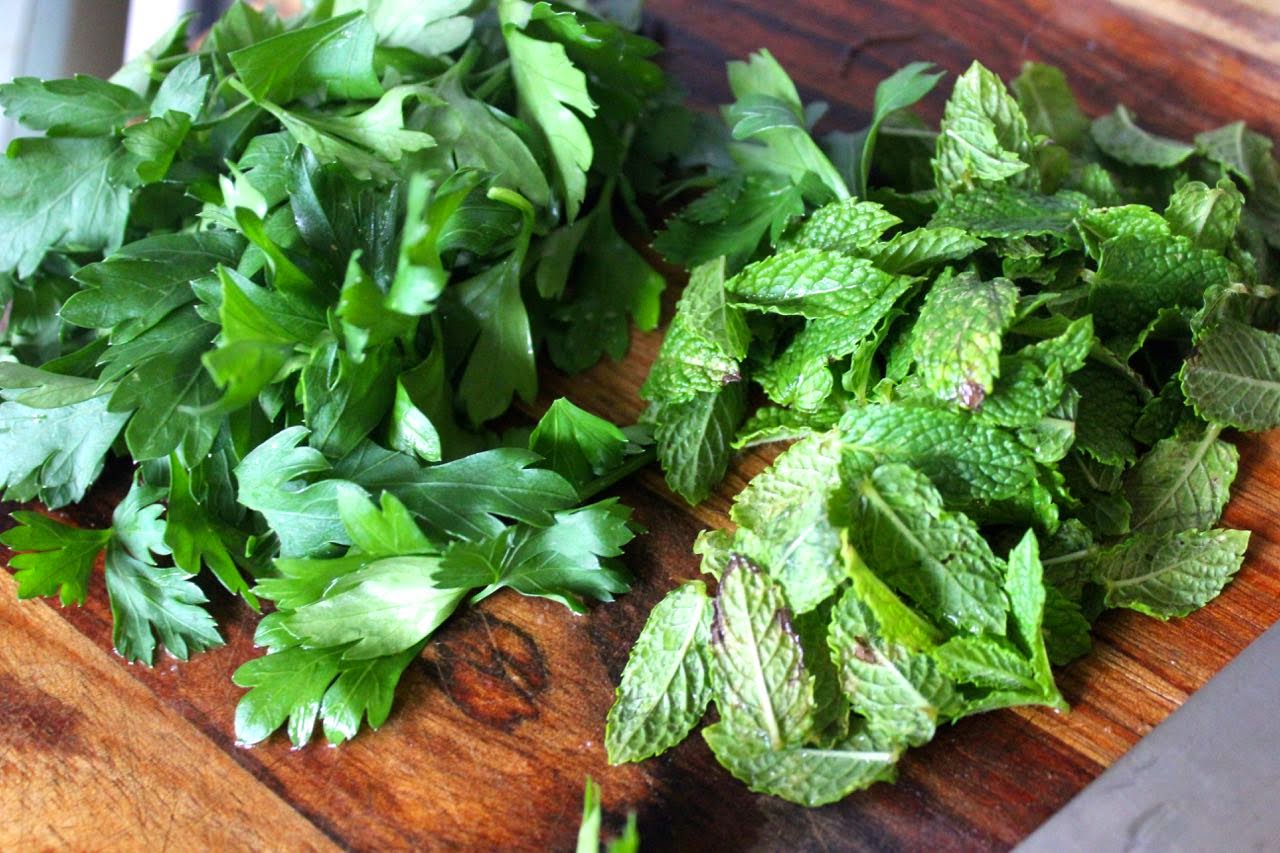 I thought it looked really pretty but to be honest I wasn't sure it was worth the effort of stuffing the flowers.  Perhaps it would be just as easy to lay them on top with no stuffing.  Or they would be good on the rice with a little bit of creamy ricotta or cashew cream filling.  I would definitely do it again and perhaps even use it for a centrepiece at a fancy dinner.  Given that I could find zucchini flowers at the right time! 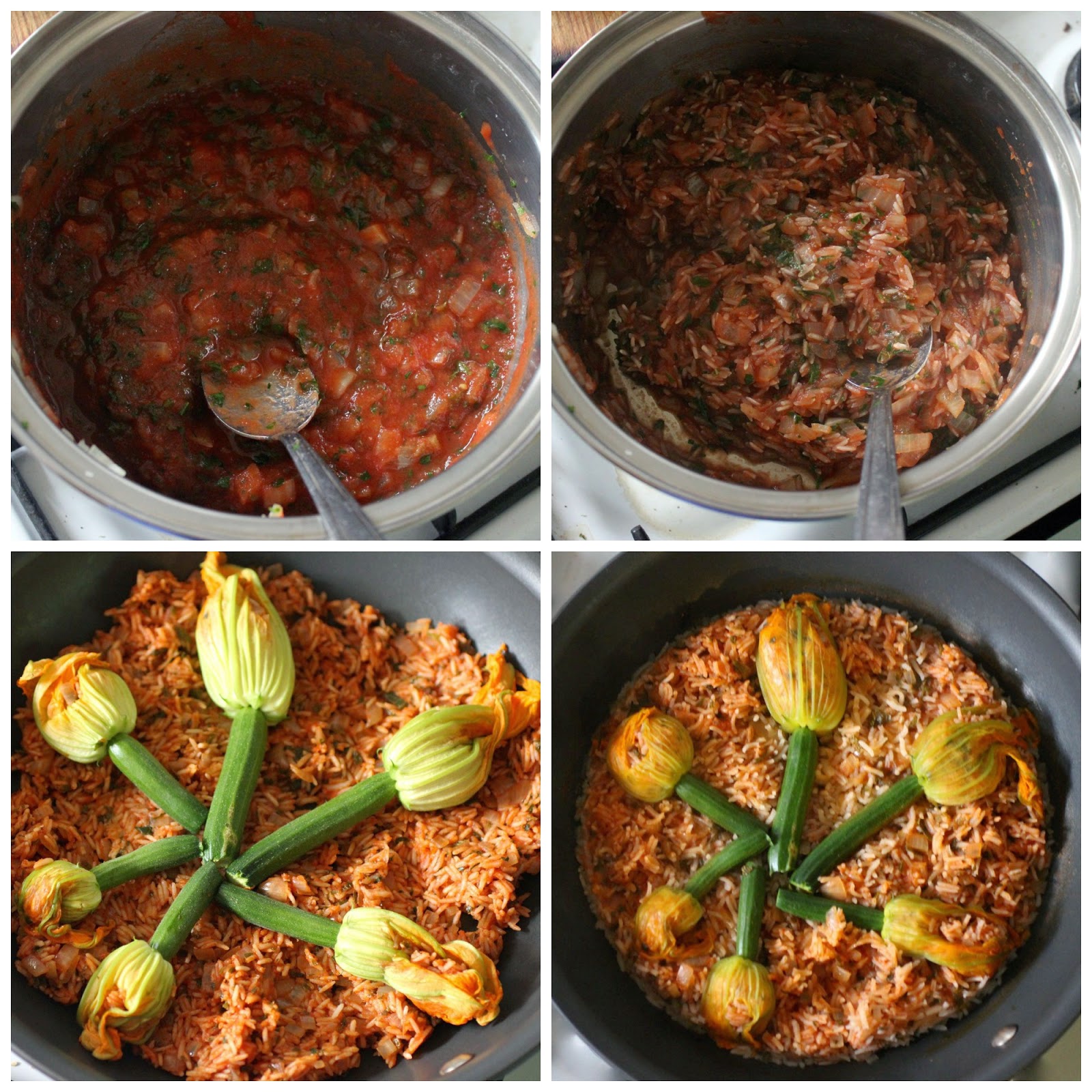 Stuffing the flowers was quite a palaver.  As I started to think about doing it, I stumbled across Cakelaw talking about how putting the flowers in the fridge actually made them stick together more.  Sadly her advice was too late for me.  My zucchini flowers had been in the fridge a few days.  And yes they were stuck together and hard to stuff.  After all there is not much room for stuffing anyway.  At least the stamens came out without too much effort.

Sylvia would not eat the zucchini flowers.  She told us that they might have bees wee on them.  At least she ate a small bowl of the rice.  She didn't scream blue murder but she wasn't overly keen.  We have got to a point though where she is making more of an effort to eat what we are eating.  The little victories are sweet! 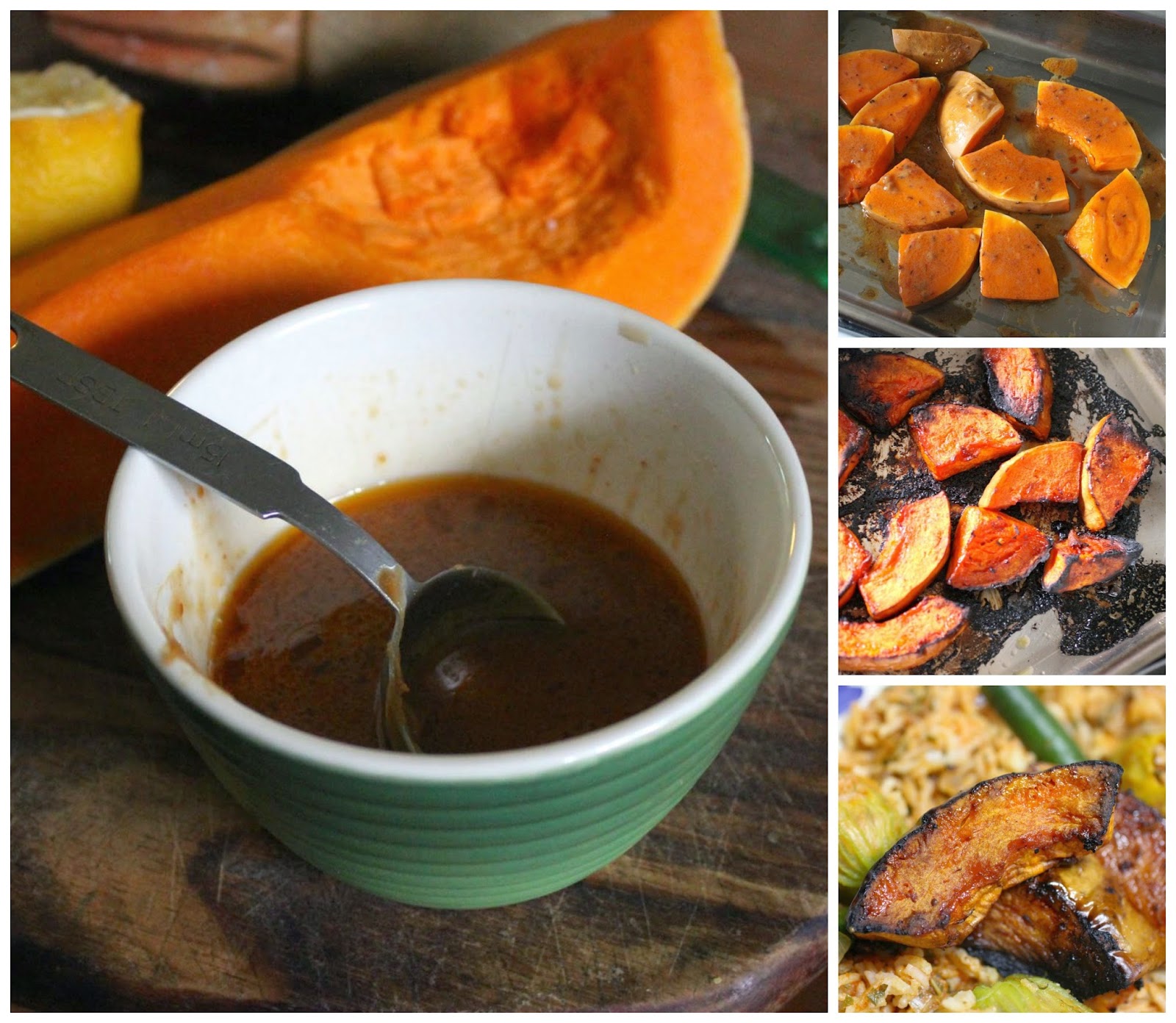 While I was pleased with the zucchini dumplings I was on more familiar ground with trying some miso harissa roasted pumpkin from Vegan Miam.  It gave far more return for little effort compared to the flours.  I roasted it in a pan that I knew would cope with some charring.  And it was lovely.  Soft melting pumpkin flesh with crispy skin.  The pumpkin and the rice would make a satisfying meal even without the zucchini flowers. 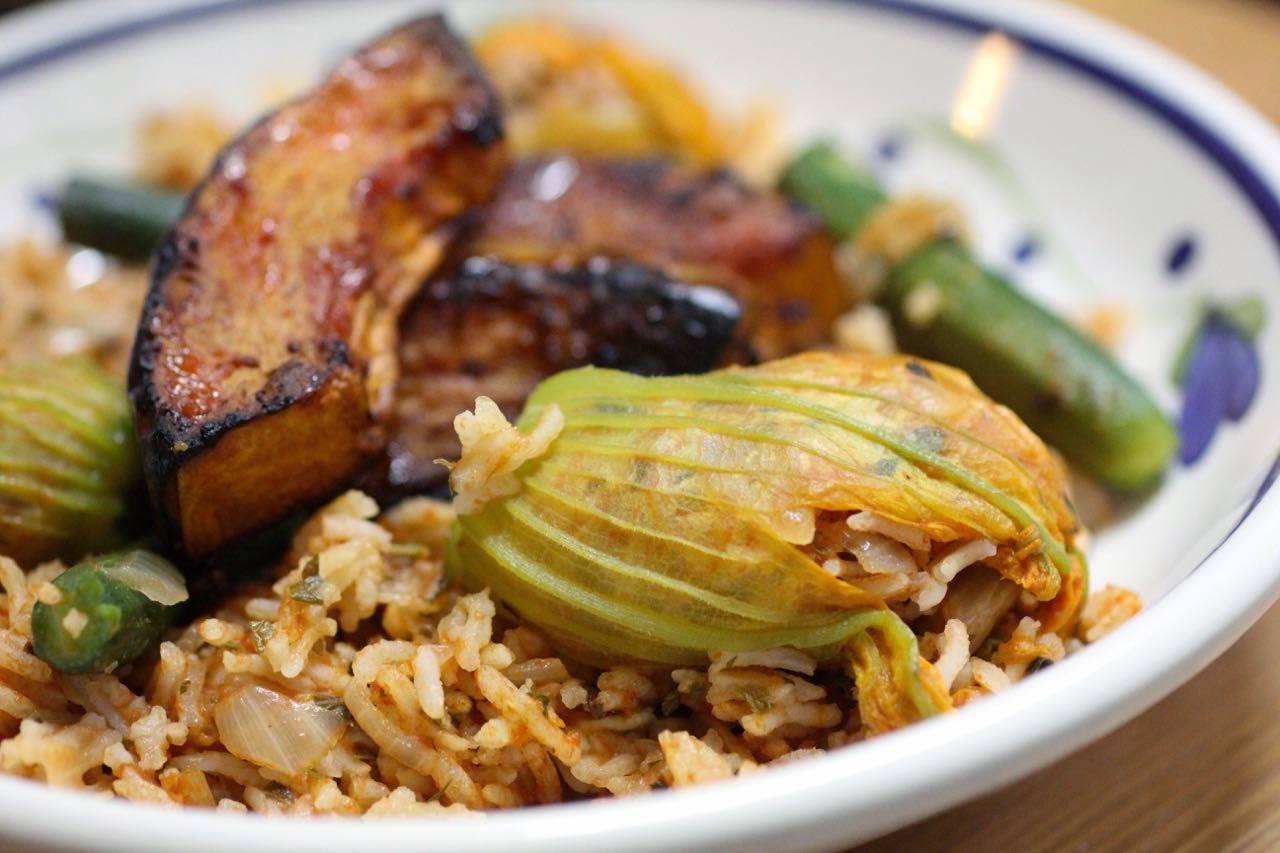 My other exciting purchase on the same weekend was 1 kilogram of strawberries for $5 at Batman Market.  It is the sort of purchase that is amazing at the time and then leaves me wondering what to do with them.  I didn't want to make jam.  I made icy poles and had heaps left.  So I searched Eat Your Books and found an amazing dessert of dumplings in a strawberry sauce at Smitten Kitchen. 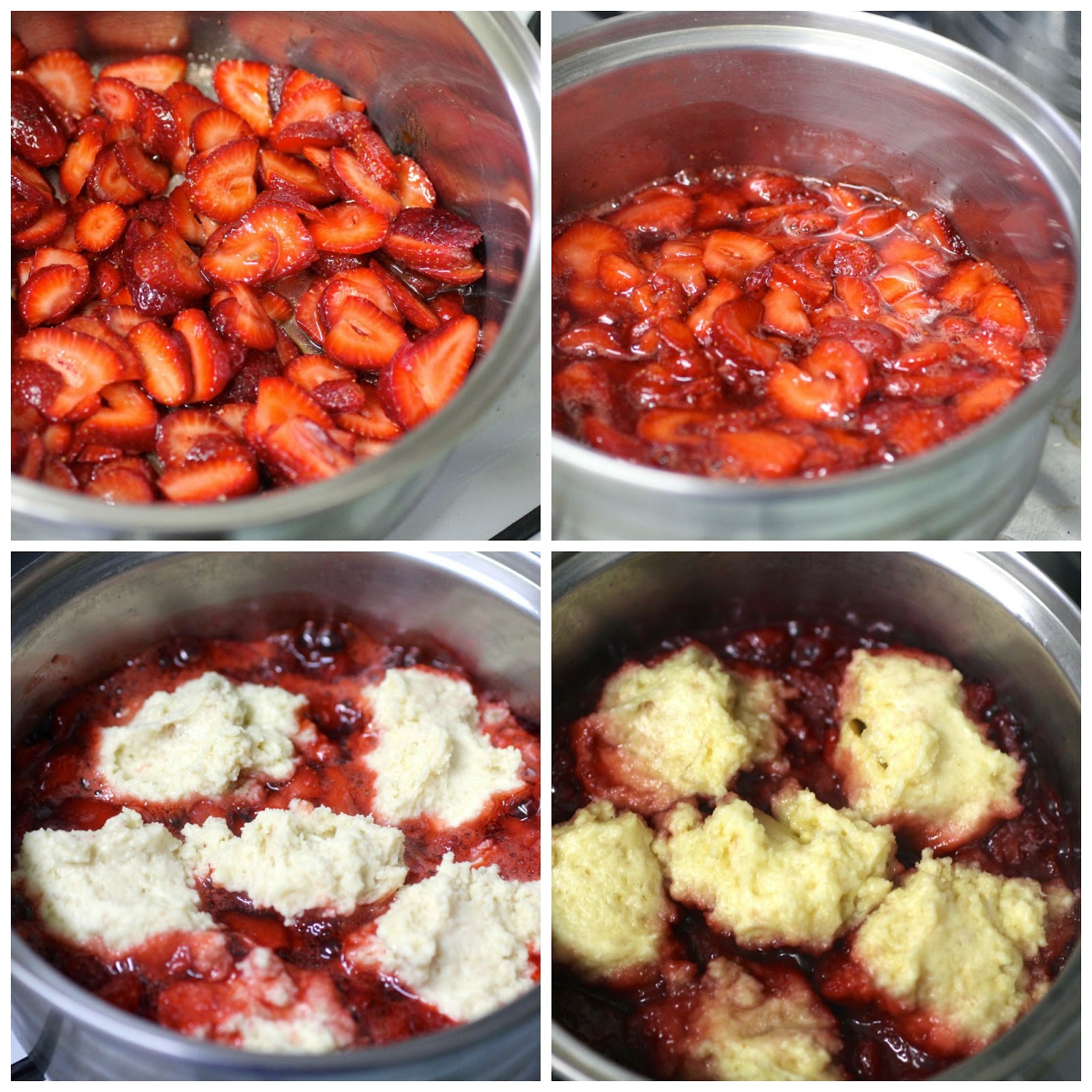 I told Sylvia I was making dumplings.  Like a typical child she took great opposition to the unknown.  'Yuk' she exclaimed because asking what they were like.  'A bit like cake' I suggested to steer her onto familiar ground.  That was the least of my problems.

I didn't read the recipe and got my timing all wrong, the sauce burnt at the bottom of the pan, and my idea of trying white chocolate in the dumplings (inspired by a recipe a friend once made me) made no impact on the flavour.  But who cares when it tasted so good! 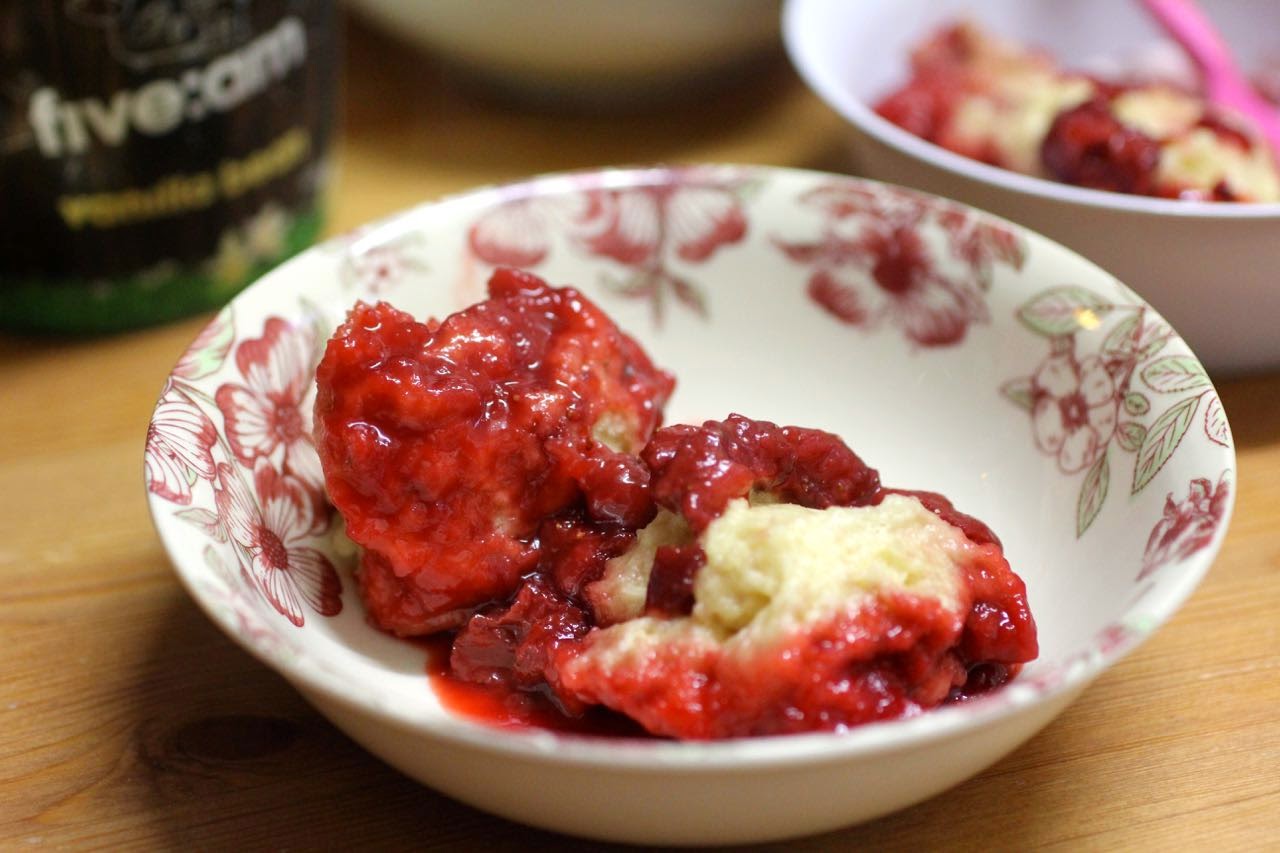 The dessert was far better than I expected.  The berries cooked down to a fruity sauce that was more intense than fresh berries but still tasted like fruit rather than syrup.  The dumplings were soft and soaked up the sauce.  Sylvia told me how much she loved it and that it tasted like cake.  E suggested treacle dumplings (at which I pointed out golden syrup dumplings on my blog).

What I really loved about this dish was that it was a great way of using up lots of strawberries without using the oven or preserving in jars.  I love cakes but strawberries seem to disappear into them and I am not great at layer cakes with cream and berries or trifles.  This dish is best fresh and needs to be eaten warm.  However with some ice cream or our favourite vanilla yoghurt it is perfect for summer.

Fry onion in oil over medium heat in a large saucepan for a few minutes or until golden brown.  Stir in herbs, cumin, mustard, and salt.  Fry for about a minutes.  Mix in passata, water and rice.  Bring to the boil and simmer on medium heat for about 5 to 10 minutes.  The rice will still be quite hard.

Remove stamens from the flowers and trim the baby zucchinis.  Gently prise open flowers and stuff as many zucchini flowers  as possible with the rice mixture.

Spread remaining rice in a very large frypan.  Arrange flowers on top.  Sprinkle with a pinch of salt.  Pour in 2 1/2 cups of boiling water into frypan.  Bring to the boil and then simmer over medium heat for about 25 minutes or until water is absorbed and rice is cooked.  (If rice is not cooked, add a little extra water and boil for another 5 or 10 minutes.)

Preheat oven to 220 C.  Trim pumpkin but leave skin on.  Cut into wedges or slices.  Mix remaining ingredients to make a marinade.  Toss with pumpkin a roasting tray.  Roast for 50 to 70 minutes, turning occasionally until pumpkin is soft and slightly charred around the edges.  (I did 70 minutes but my oven is quite slow.)

Mix strawberries, brown sugar and lemon juice in a small saucepan.  (Mine is about 18cm in diameter.)  Set aside for 15 minutes to let the berries release the juices.

Meanwhile make the dumplings by heating the milk and butter enough to melt the butter.  Mix in the flour to make quite a stiff batter.

Bring the berries to the boil slowly on medium heat, stirring occasionally.  Drop spoonfuls (about the size of golf balls) into the strawberry mixture.

Cover and turn heat down low.  Simmer for 15-18 minutes without lifting lid.  Dumplings will have expanded and be spongy to touch when done.

On the Stereo:
God: Johnny Cash 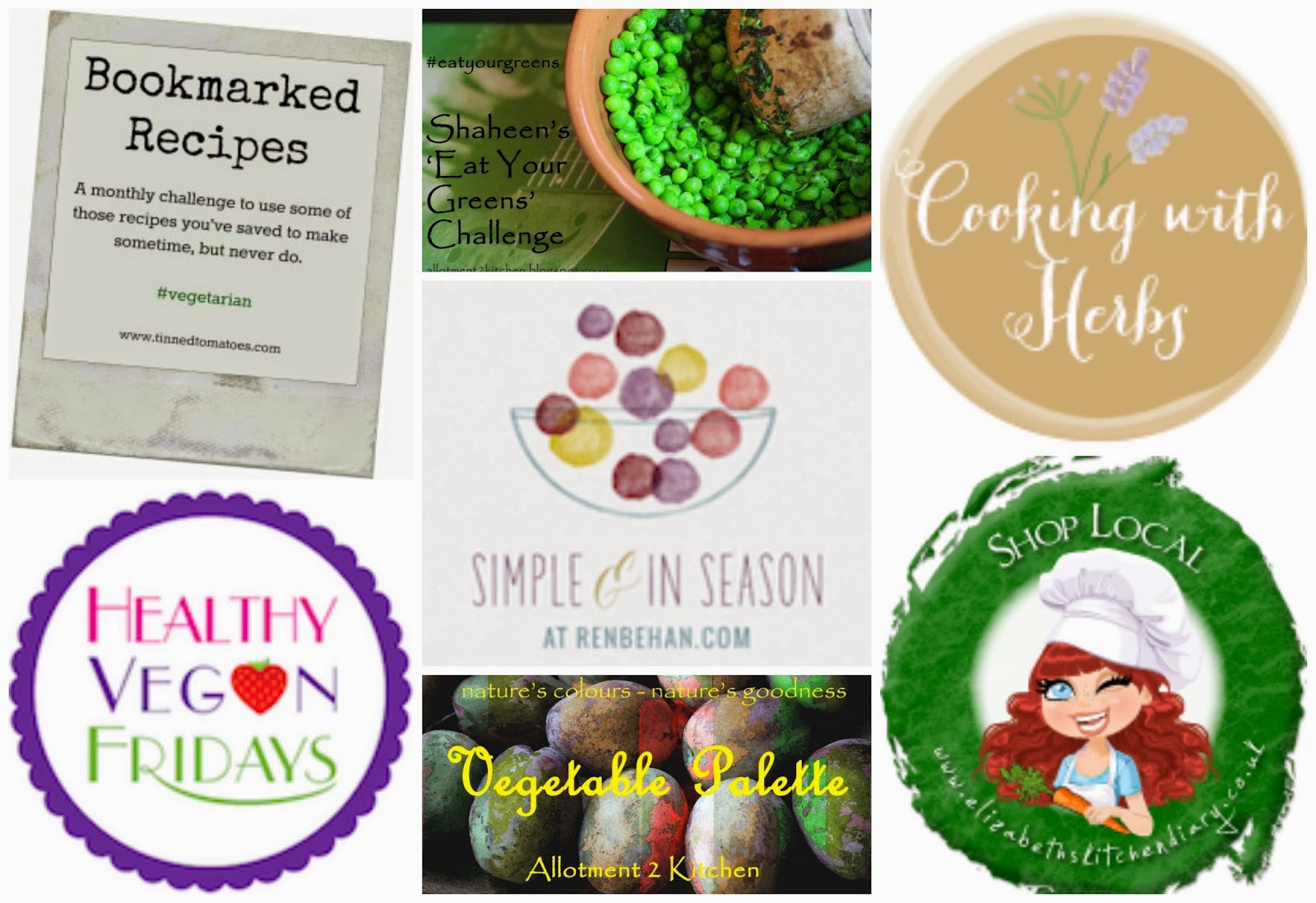 I've crammed a lot into this post and so there is lots to share in the following blog events:

On the Stereo:
Christmas: Low
Posted by Johanna GGG at 11:25