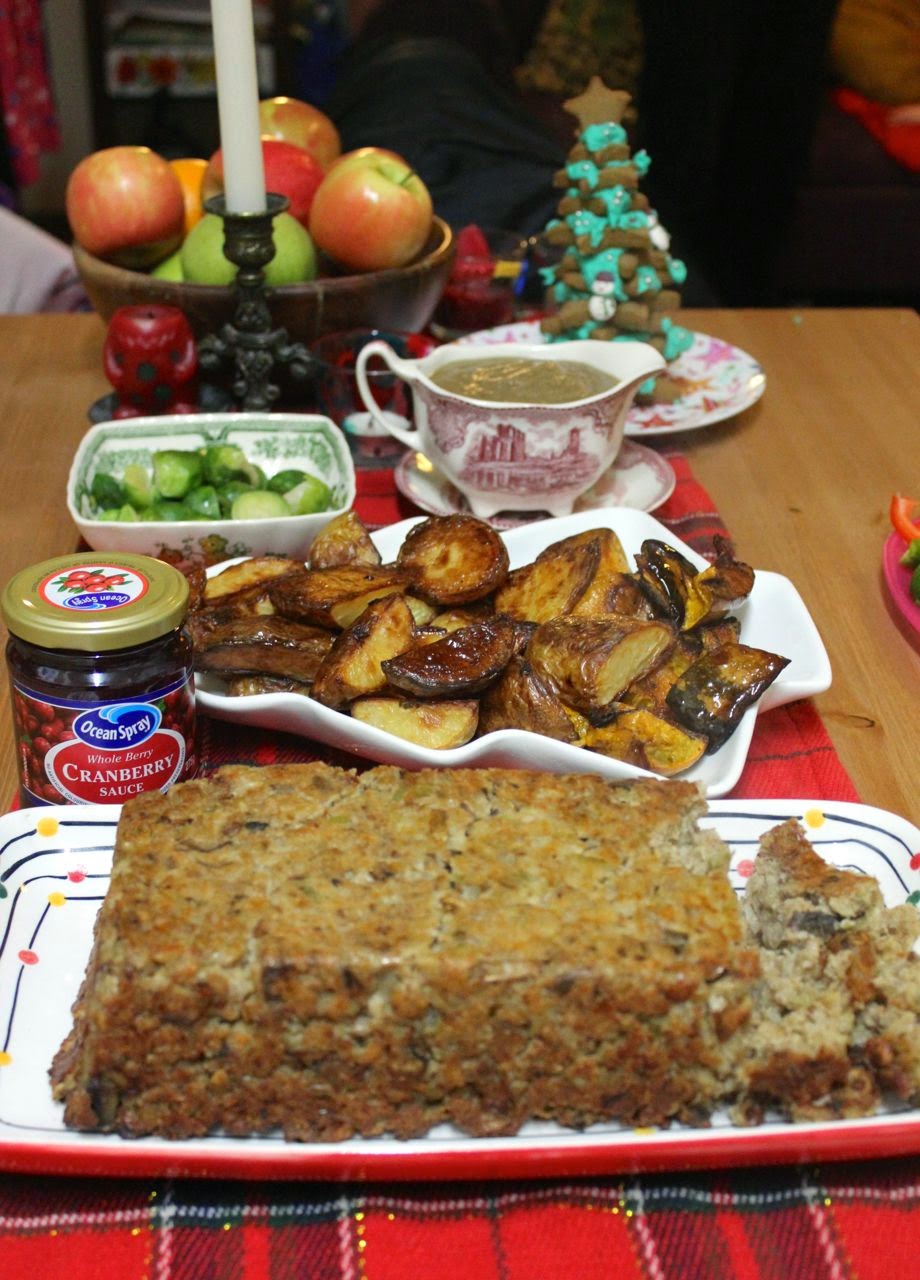 Sylvia started it.  I love to celebrate Christmas in July but had no plans this year.  We had a quiet weekend at home to try and throw off our colds when Sylvia found the Christmas CDs and books.  (Must hide better next time!)  So began the craziness.  I told her we could play carols and watch a Christmas DVD and I would make Christmas dinner.  Why not when, baby, it's cold outside! 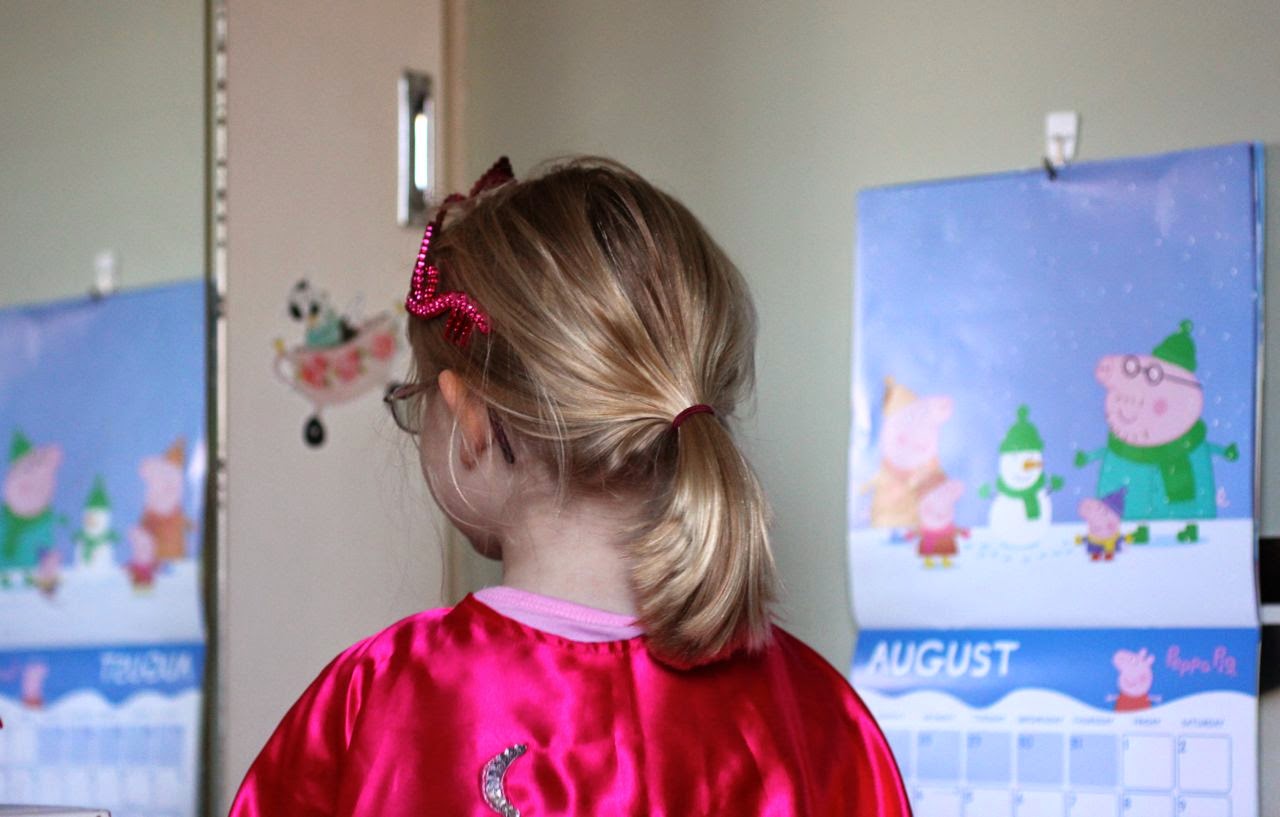 For those unfamiliar with Christmas in July, it is truly delightful in Melbourne to celebrate Christmas in the middle of winter and indulge in a decadent festive meal.  (Of course it is not about presents!)  We are feeling very wintery lately.  Sylvia is insisting on turning her calendar to August for the snowman picture.  We even have had snow in the hills outside Melbourne.  And I keep hearing wind and rain outside even when there is none.  You see, I have had an ear infection for the past week that is playing havoc with my hearing. 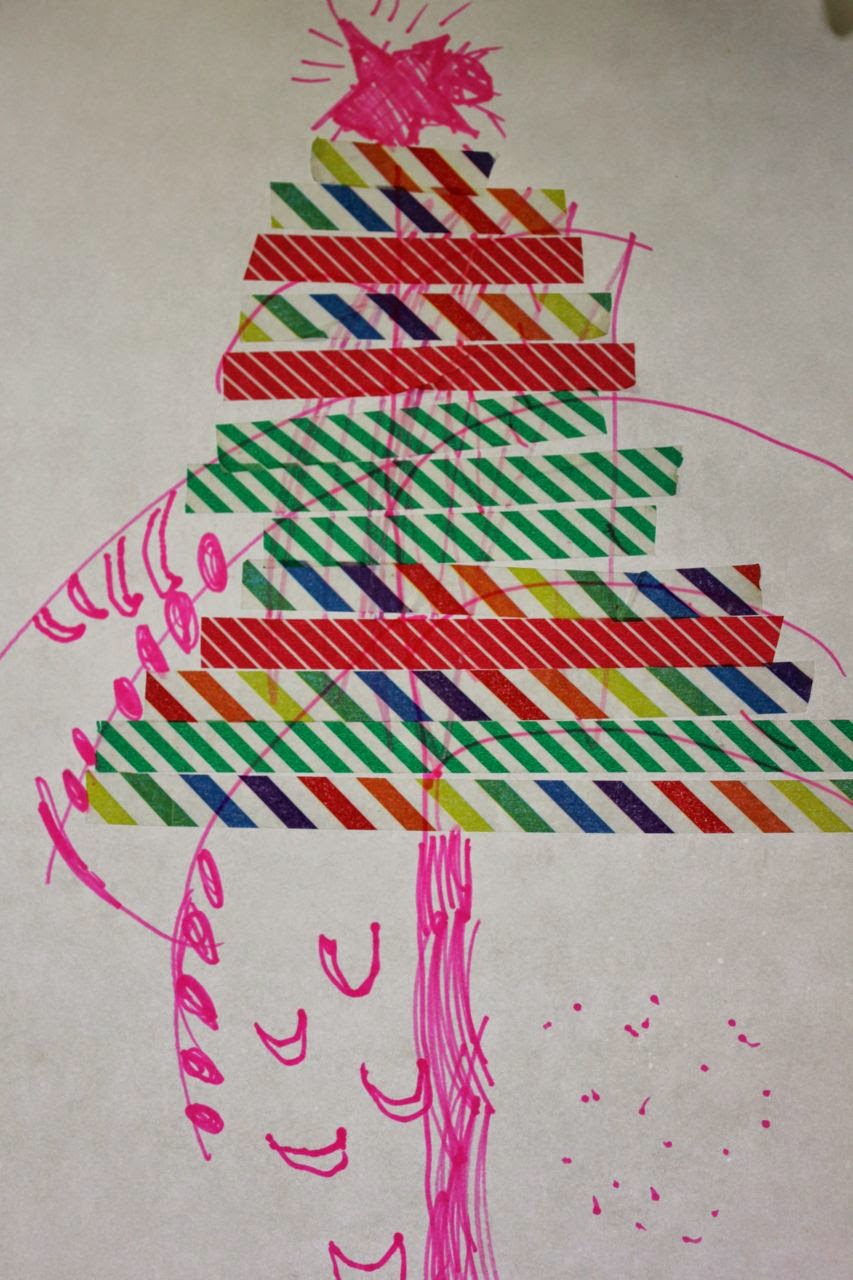 We needed a tree!  I wasn't committed enough to drag out Christmas decorations.  Instead we had a quick craft episode with a few rolls of colourful washi tape.  With a bit of guidance, Sylvia created a picture of a Christmas tree to put on the wall.  Her tree had bananas and the star at the top was sticking out its tongue! 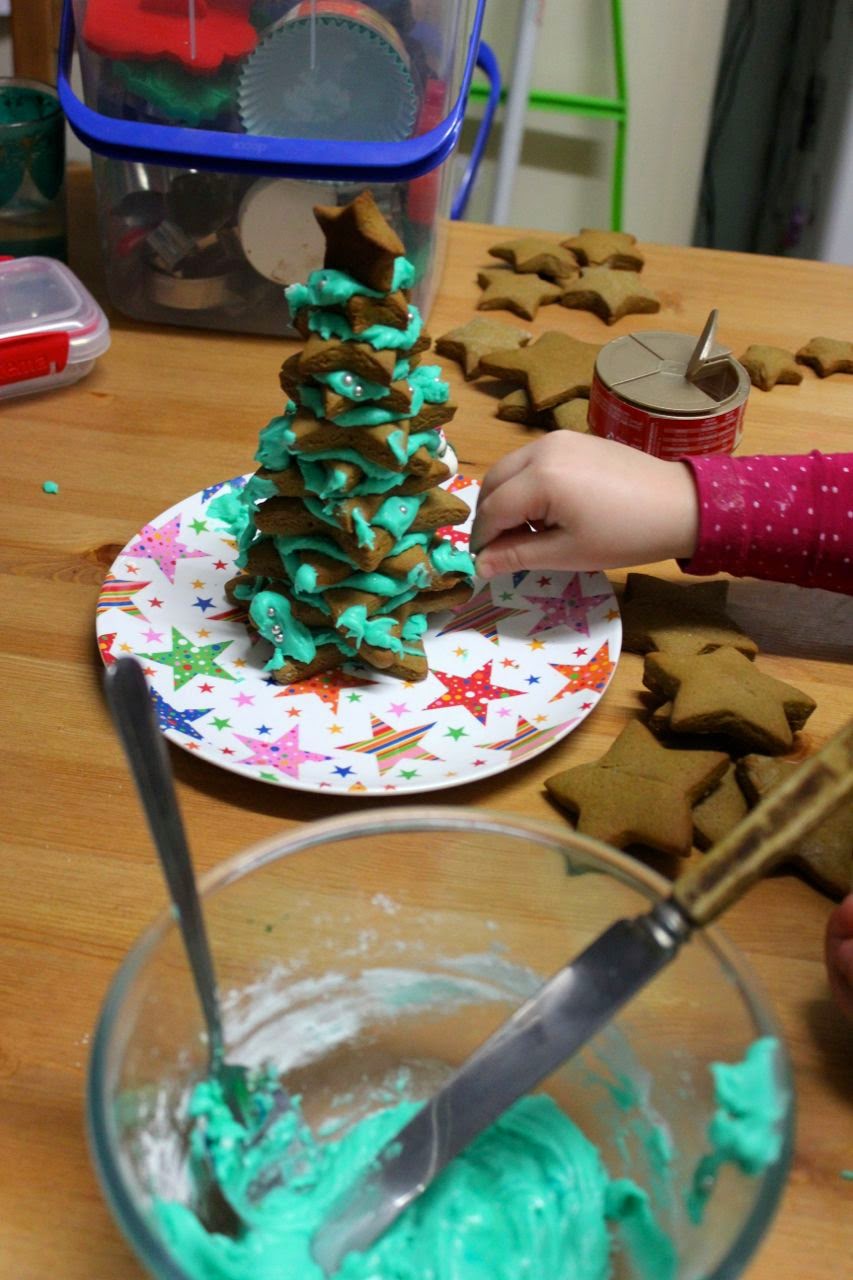 More effort on a Christmas tree was kept for our gingerbread tree.  We have a graduated set of 5 star biscuit cutters that we have used on another gingerbread Christmas tree.  Last time we used a gingerless gingerbread that was appropriate to our friend's intolerances.  On the weekend we used my favourite gingerbread recipe.  It has never let me down.  We smooshed together the stars with green icing.  Then Sylvia decorated it with Christmas sprinkles. 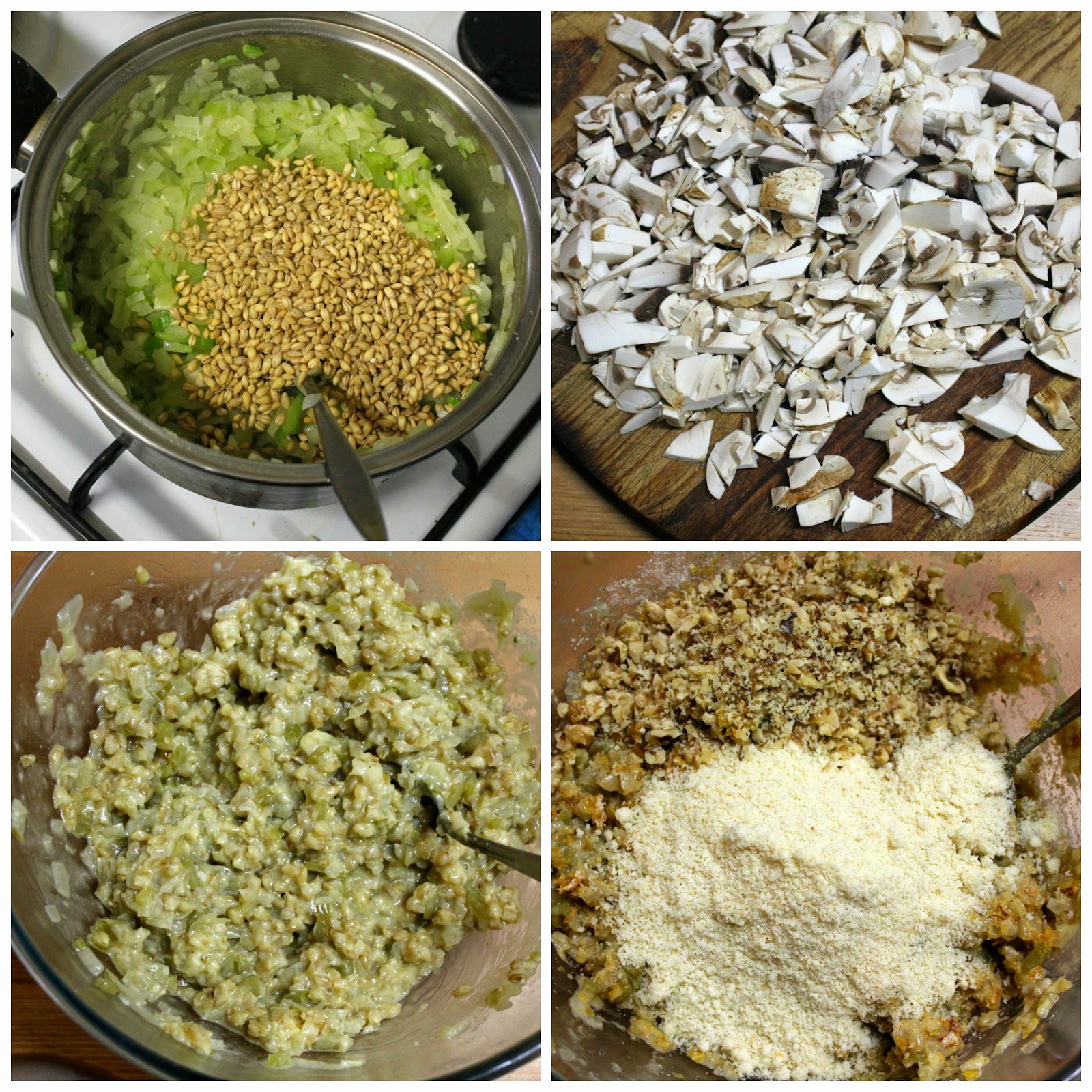 For the Christmas dinner, it seemed obvious to make a nut roast.  As those who know my blog will be aware, I love nut roasts and make them frequently.  I had some pearl barley and split peas in want of using.  I googled and found ideas.  In particular, a Jamie Oliver Cranberry and Pistachio Nut Roast.  It appealed because it suggested I could use barley instead of rice in the risotto base.  (The recipe omitted to note that it would take longer to cook barley than rice!)

I have decided my recipe is different enough to Jamie's to claim it as original because I made so many changes.  The main one is that I couldn't find fresh cranberries to top the nut roast.  They are rare in Melbourne at the best of times and I didn't have the energy to hunt them out.  I only went to the shops because I needed another course of antibiotics.  Our local shops don't sell wild mushrooms so I used portabello and button.  I used whiskey instead of wine, smoked vintage cheese instead of cheddar, walnuts instead of pistachios.  Even my breadcrumbs were different as I had kept leftover seasoned crumbs and cornflakes from some tofu nuggets.

Jamie says to leave out the eggs and cheese to make the nut roast vegan.  I would try mixing through a little tofu.  My nut roast took a lot of its flavour from the smoked vintage cheese.  To veganise this nut roast, I would add some smoked paprika and additional seasonings.  In fact the nut roast was so hearty that a small amount would suffice and it would serve quite a lot of people if need be. 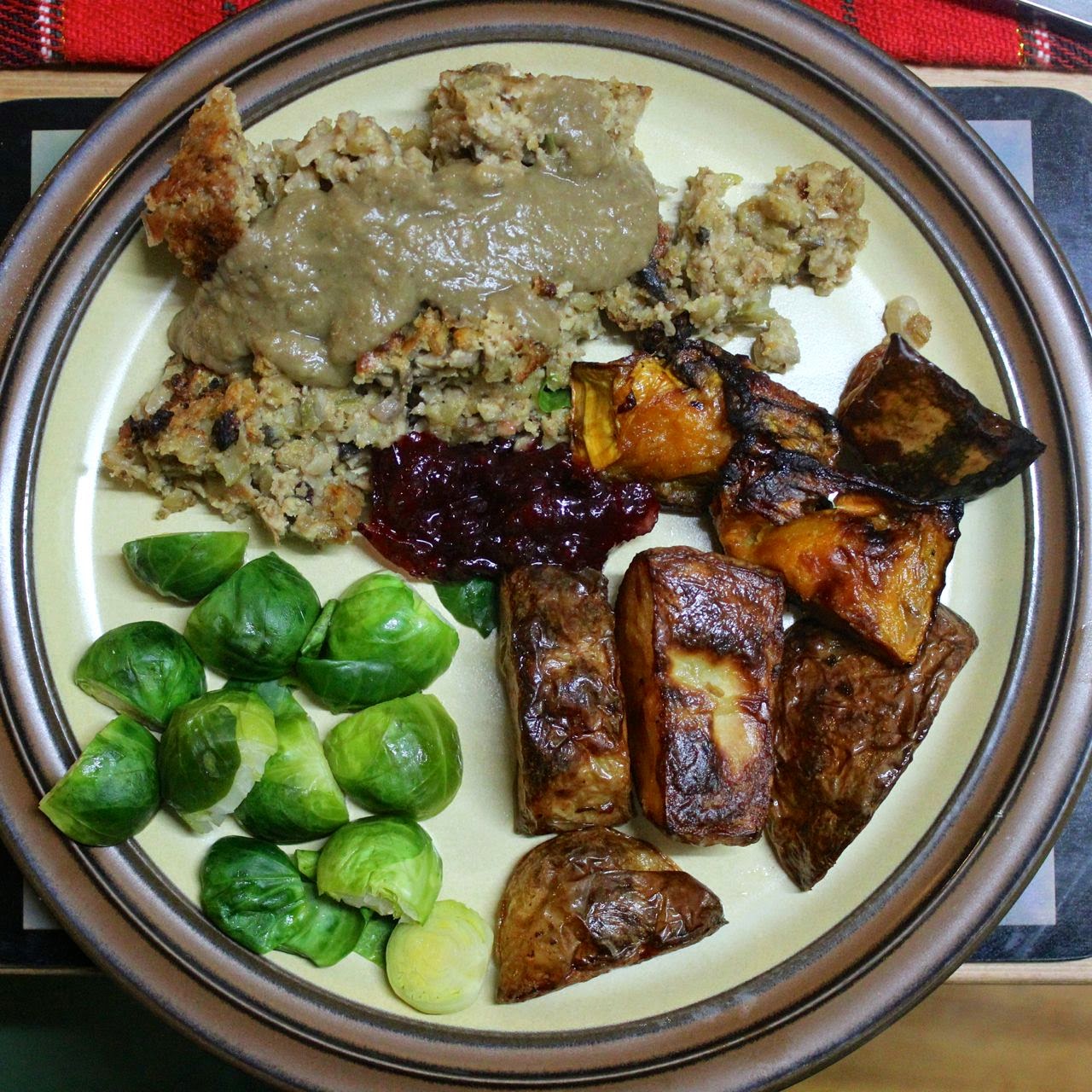 I had promised Sylvia a Christmas dinner so it was a proper roast dinner with roast potatoes and pumpkin, brussels sprouts, gravy and cranberry sauce.  I had some miso lentil grave (from Isa Does It) in the freezer.  It was ok but a bit thick and intense for a nut roast.  The cranberry sauce worked well in lieu of freshly cooked cranberries.  The nut roast was so flavoursome that it needed the sweetness to cut through the seasoning.

And there were sprouts.  There are always sprouts in a traditional British Christmas.  I hated brussel sprouts as a child.  E hated brussel sprouts when I met him.  Yet both of us have come to love them.  More surprising is that Sylvia loves them.  She eats them first in her dinner because they are her favourite thing.  When I ran out this week she was demanding that I buy her more sprouts.  Am I alone in thinking this is odd behaviour in a child!  Not that am complaining.  Even so, it seemed ironic that I didn't cook all the sprouts that I bought for the meal and wished I had.  They were really good! 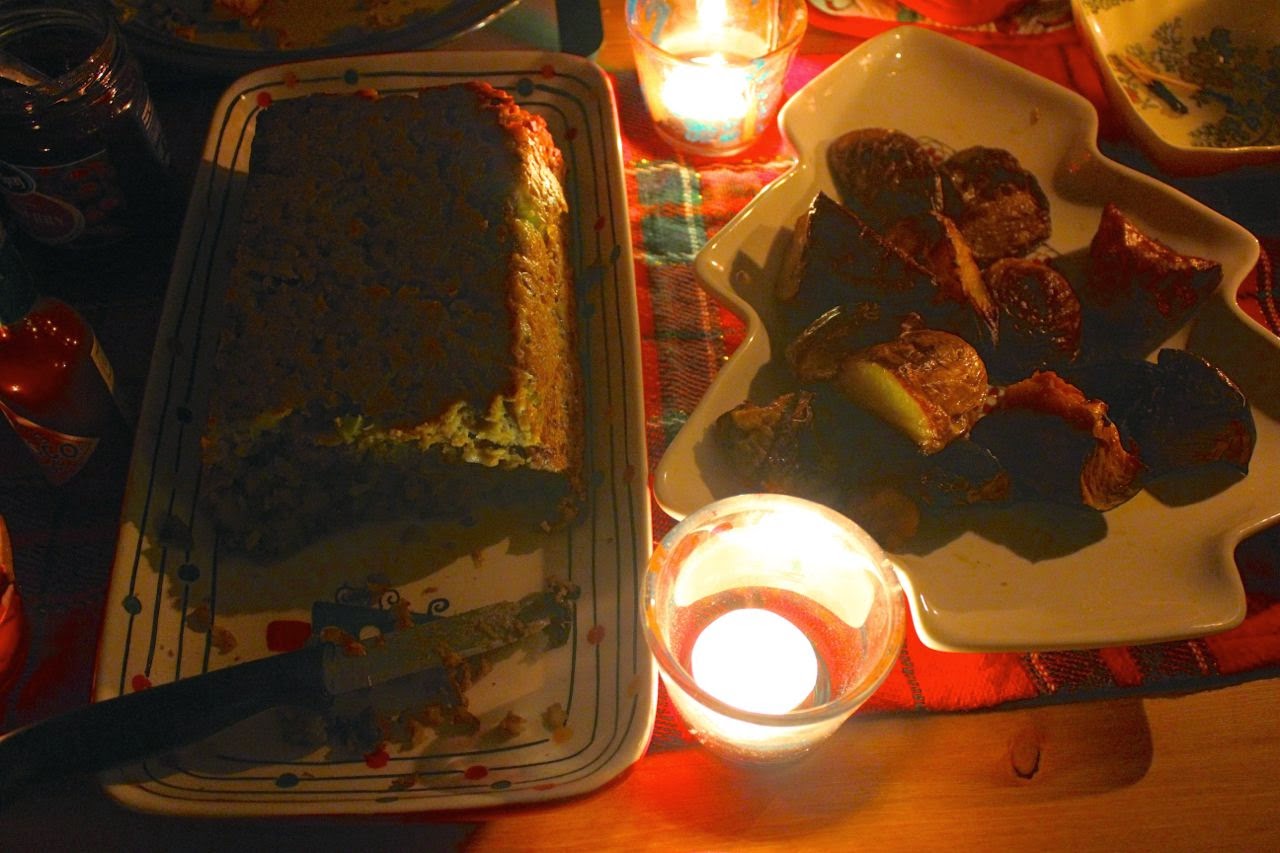 I dug out our tartan table runner and Christmas dishes.  Sylvia decided that dinner must be by candlelight.  She loves roast potatoes but was less impressed by a small piece of nut roast.  In fact the best thing she had to say for it was that if she ate enough cranberry sauce she couldn't taste the nut roast.  I suspect it was the candles and carols rather than the nut roast that made her exclaim that it was the best night ever. 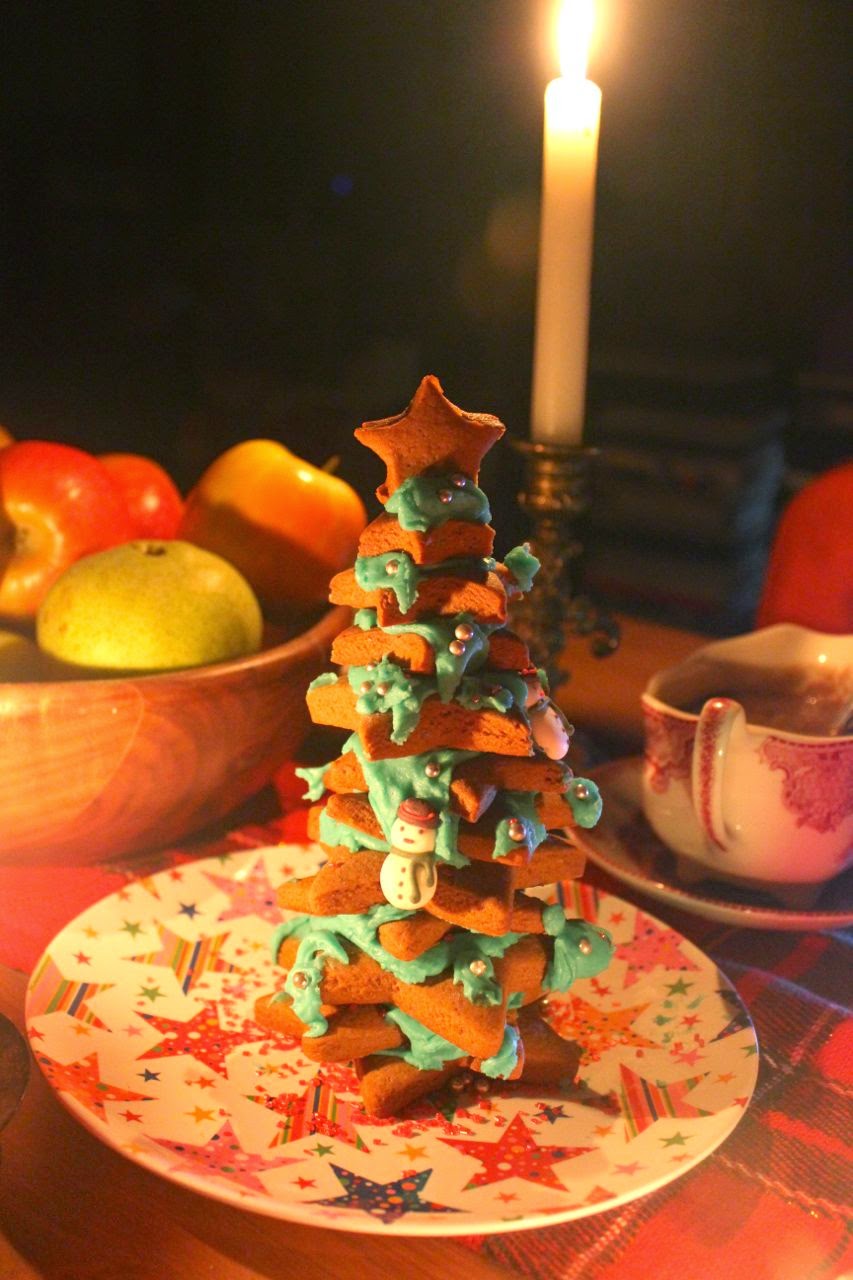 And Sylvia loved the gingerbread Christmas tree.  She was very excited when it was time for dessert.  This was an easy and yet impressive way to finish our Christmas dinner.  And it made a festive touch to the table.  I enjoyed the gingerbread but I was so full from main course that it was a bit wasted on me. 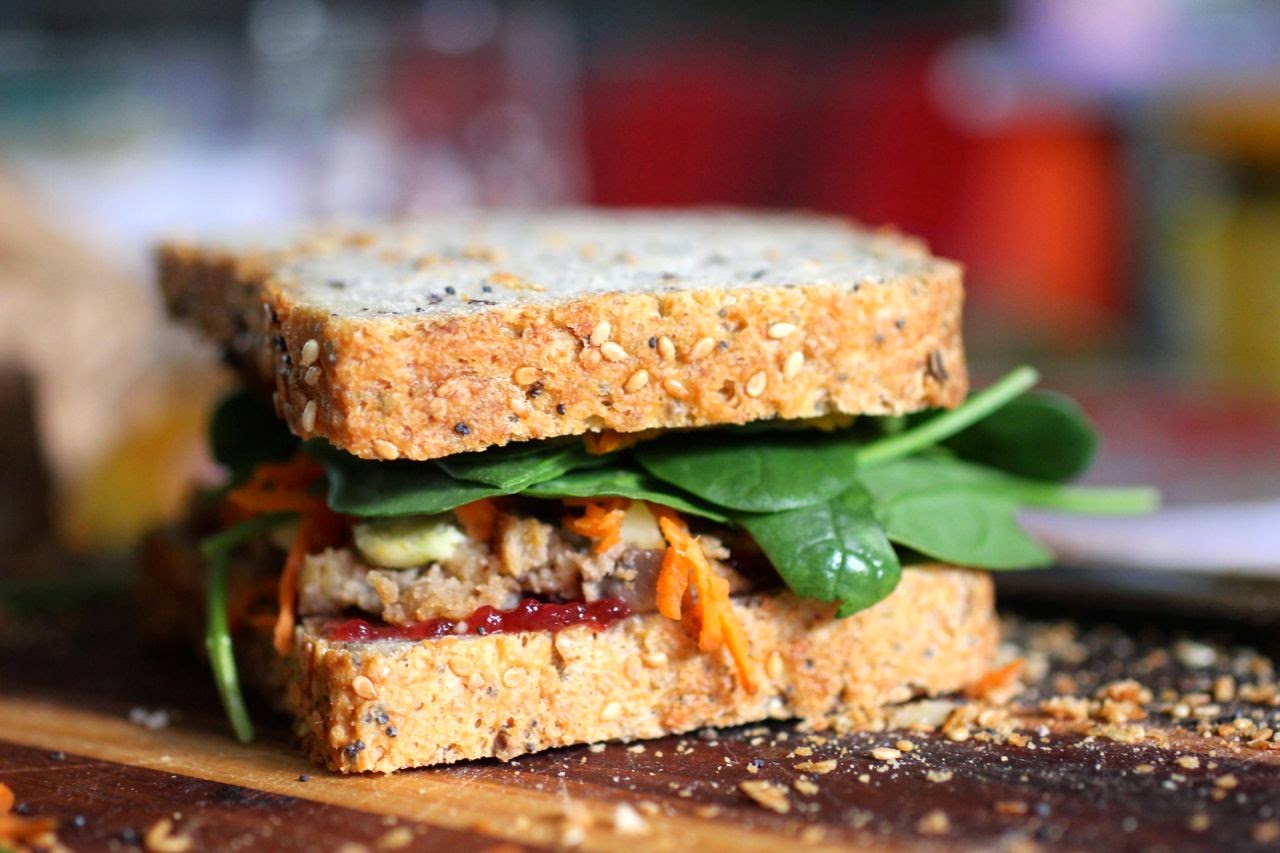 As a meat eater I once loved the leftover meat after Christmas dinner, and as a vegetarian I now love the leftover nut roast.  The following day we had plenty of nut roast.   Did I mention that I baked oat and seed sourdough bread around preparing for our Christmas in July!  It meant that I could eat wonderful leftover nut roast sandwiches.  Actually I overdid the cranberry sauce and roasted pumpkin in the sandwich.  It need a little less sweet flavours but with spinach and grated carrot was still lovely.  I also made some rice and nut roast, a bit like this recipe (without stuffing it in peppers). 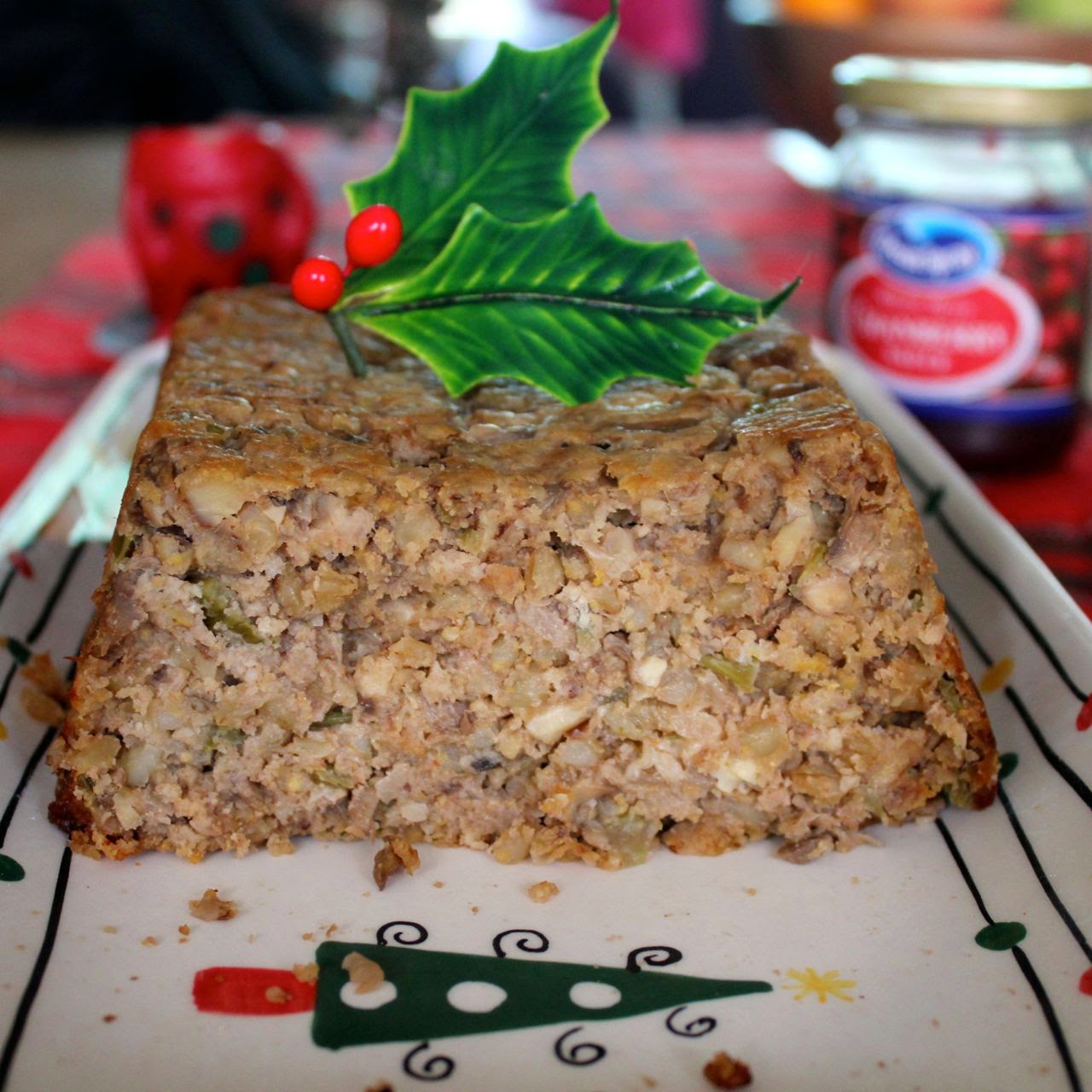 And the next day I could photograph the nut roast in daylight.  Natural light for blog photograph seems very limited at the time of year.  For those in the Northern Hemisphere experiencing long summer days (or as The Age newspaper recently said, Britons experiencing a (sort of) heatwave), you probably don't feel very Christmassy at all.  Perhaps reading this post, you are feeling just the way that we do Down Under when it comes to Christmas in December: too hot to think about Christmas and finding it hard to feel in synch with those wintery weather that are the hallmark of the festivities.  For us, it felt just like right.  But even better without the annoying commercialism.  This is the sort of Christmas I wish for all year round!

I am sending this nut roast to:

Heat between 1 and 2 tablespoons of oil in a medium saucepan.  Fry celery and onions over medium heat for 10 to 15 minutes until soft. Stir in garlic for a minute or so.  Add pearl barley and fry for another 5 to 10 minutes.

Deglaze with whisky and the stir in the 2 - 3 cups of boiling water and the vegetable stock.  Bring to the boil and simmer for about 40 minutes or until the pearl barley is just cooked and most of the water is absorbed.  Add more boiling water as required.  (I originally added 2 and 1/2 cups of water and then added another cup when it was absorbed and not yet cooked.)

Meanwhile fry mushrooms in 1 tablespoon of oil over medium heat for 5 to 10 minutes until soft and most of the juices have evaporated. (If you don't get to do this until your barley is cooked, you can do this in the same saucepan once barley is transferred to the mixing bowl.)

While the barley and mushrooms are cooking, prepare remaining ingredients and add to a large mixing bowl.  Add pearl barley mixture and mushrooms once cooked and stir together until well mixed.

Spoon mixture into the prepared loaf tin.  Smooth the top of it with the back of a spoon.  Bake for about 1 hour and 15 minutes.  Turn halfway through the baking and check if it needs to be covered in foil.  My oven refuses to burn anything (except the odd chip) but I know others are more powerful.  I baked mine for 40 minutes at 200 C and it was a bit soft so longer would be better.

Allow to rest for at least 10 to 15 minutes.  Turn out onto a serving tray.  You can make this a day ahead and keep on a serving tray covered in foil (once cooled) and reheat (covered in foil) on the day.  Serve with lots of roast vegies, greens and gravy or anyway you want.  I highly recommend some cranberry sauce.

On the Stereo:
White Christmas: Bing Crosby
Posted by Johanna GGG at 10:02