Adventures with plums: stewed, jam, with tempeh, soup and crumble 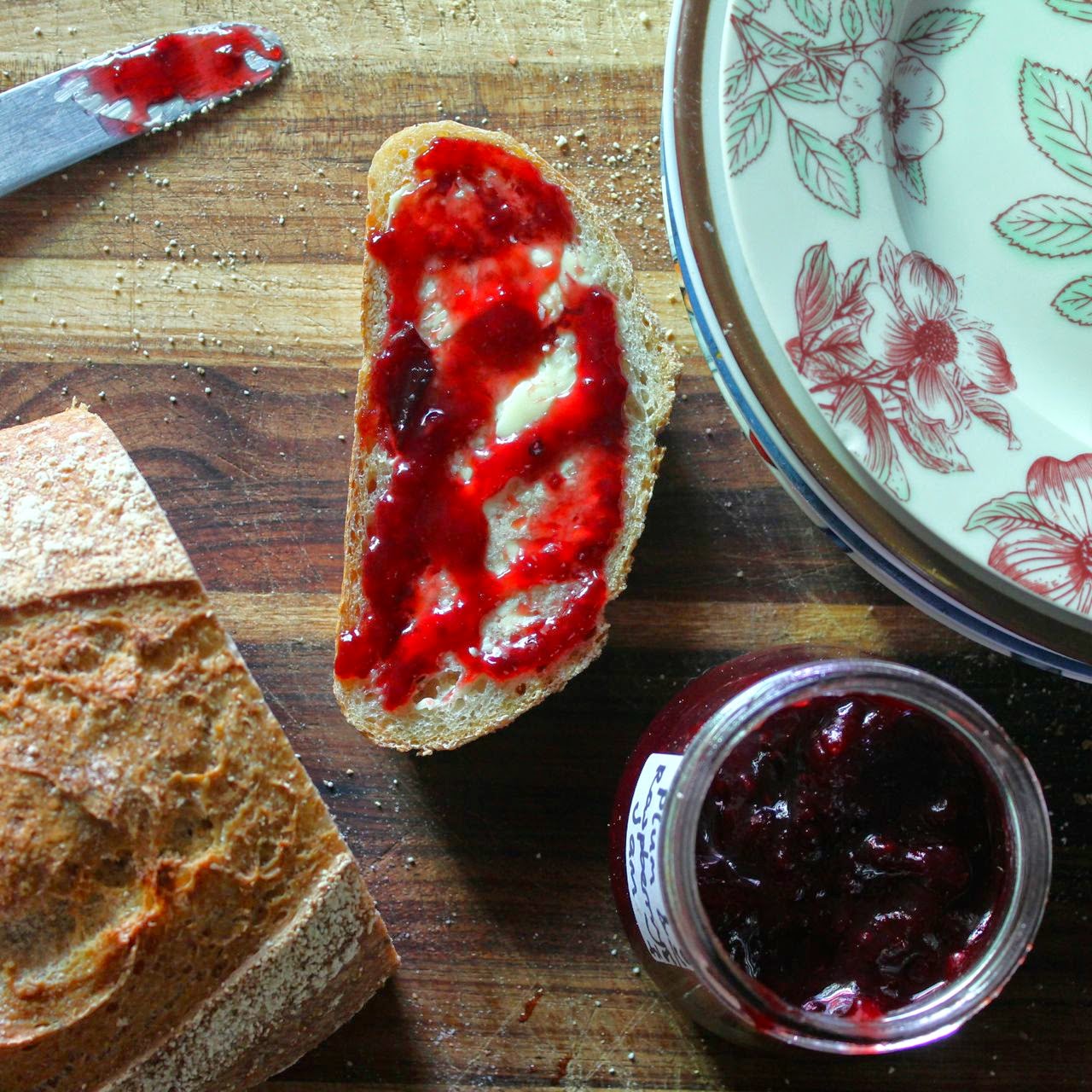 Plums are the latecomer in the stone fruit world.  While my fruit bowl is filling with cherries and peaches in early summer, there is nary a sign of plums.  Then in Autumn when most of the stone fruit has disappeared, plums are still hanging in there.  And most welcome.  Unlike most stone fruit, I don't eat lots of fresh plums but I love stewing them and baking with them.  Here are a few of the ways I have used plums this Autumn. 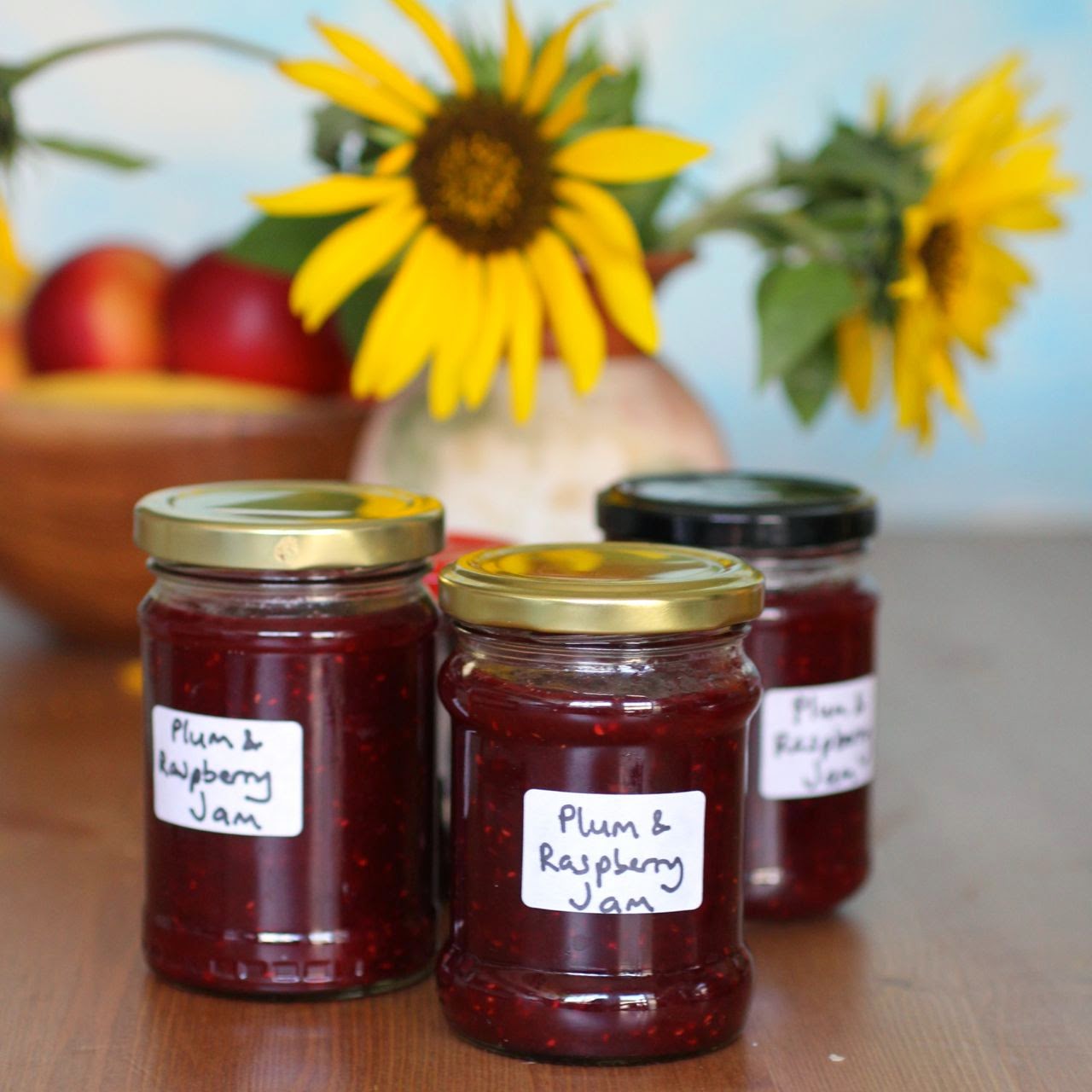 I have a penchant for plum jam.  When plums were cheap at the end of February, I bought some plums and strawberries to make jam.  Sylvia requested the strawberries be in the jam but we ate them.  Instead I added raspberries.

It was my third jam of the summer so I was in the zone.  I was fairly cavalier with measurements.  Then I worried it wasn't sweet enough when we opened the first jar.  Later I tasted a supermarket jam we have in the fridge and it was like sugar.  It made me appreciate how good it is to taste the fruit in my jam.

One of our household's favourite dishes to make with plums (or any stewed fruit) is a crumble.  I made this apple, plum and quince crumble.  I cooked the fruit separately and then mixed it.  It probably would have looked better (and more plum coloured) if I had cooked it together before making the crumble.  But a nice crumble mixture means that it just doesn't matter.  E love custard with crumble so much that he actually made some custard while I was at the movies with a friend. 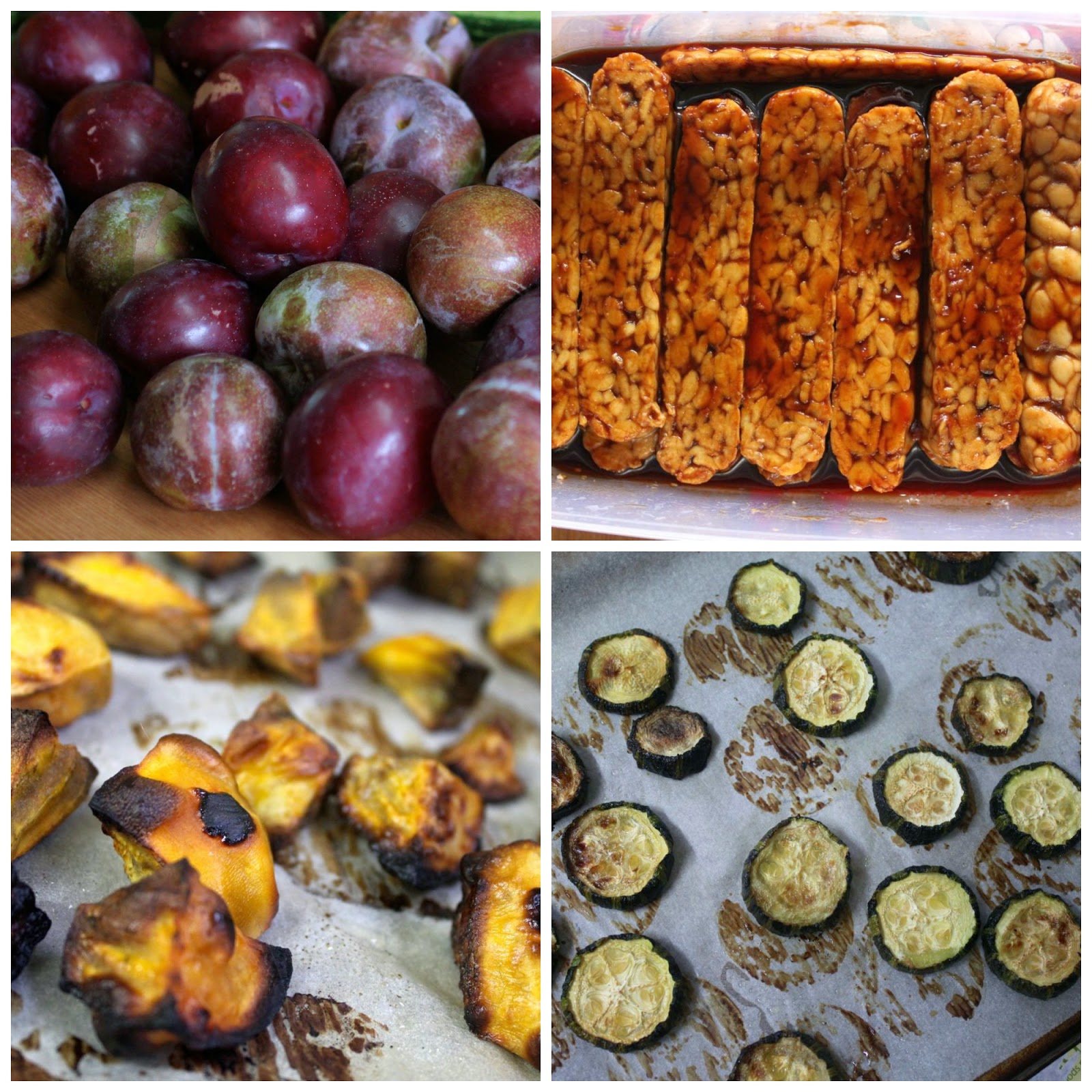 This post actually started off with decided to write about an odd tempeh bacon and plum sauce bowl that I made.  It wasn't the most brilliant dish but I enjoyed it and liked the idea.  The tempeh bacon (facon) was yummy though not crisp.  I made the plum sauce out of some stewed plums on a night when I was lacking inspiration and went to the fridge to see what was there.

The plum sauce was good with the tempeh bacon.  Any other grain or vegetable could work here but I highly recommend the combination of plum sauce and tempeh bacon.  I often think plum sauce is too rich for vegetarian dishes.  You could try this with tofu bacon or even smoky chickpeas but I think tempeh is a more robust flavour that is a great foil for the sauce.

I gobbled up the leftover tempeh bacon easily but was not sure about how to use the sauce.  Then again fate presented me with ageing tomatoes to use and a surplus of white beans in the freezer.  I blended them together with some extra seasoning and served it with cheese on toast.  It was pretty good.  I enjoyed the leftovers even more when I stirred in yoghurt, smoked paprika and black pepper.  It is more an idea than a completed recipe but again I wanted to record it because you never know when I will need ideas for leftover plum sauce.

I also made this favourite plum oat and cinnamon slice that I have made a few times.  It seemed less fruit this time.  Yet I still love it.  So full of crumbly, oaty, fruity yumminess.

Lastly I thought I might take a photo of a recent saucepan of stewed plums.  We have had a lot of stewed plums this season.  Often eaten after dinner with a dollop of yoghurt.  I stone and chop them, throw them in a saucepan with a splash of water, two or three spoonfuls of honey and a cinnamon stick.  Then I simmer until the plums are soft.  Just enough honey so they lose their tart edge.  Delicious enough to eat from the saucepan.

Every time I see cheap plums I buy a bagful.  I bought some this week.  They are definitely at the end of the season.  I am not sure our kitchen will see any more this year.  Thanks goodness for apples coming into season.  It is some consolation as we farewell plums.


I am sending the jam to Karen of Lavender and Lovage who is co-host of Tea Time Treats with Jane of the Hedgecombers.   This month the theme is jams, curds and preserves. I am sending the soup to Deb of Kahakai Kitchen for Souper Sundays.  And I am sending the tempeh bacon bowl with plum sauce to Healthy Vegan Fridays #15, hosted by Suzanne at Hello Veggy, Anna at Herbivore Triathlete, and Kimmy at Rock My Vegan Socks.

2 scant cups of sugar
850g plums, stoned and chopped
150g raspberries
juice of half a lemon

Bring all ingredients to the boil and simmer 60-80 min.  To test, put a small teaspoonful on a saucer that has been in the freezer.  When you run your finger through it, the jam should stay either side of the trail where you finger has been.  (It will firm up somewhat as it cools.)  You will also know the jam is done when it clings to the spoon rather than all running off.  I sterilised my jars in the oven and boiled the lids (See previous sterilisation notes.)  Spoon jam into sterislised jars and screw on lids tightly.  Keeps in the cupboard for months.

Place beetroot and zucchini on a baking tray lined with baking paper and spray with oil.  Bake for between 1 and 2 1/2 hours until soft and golden brown.  Heat the pearl barley.

Mix everything except the tempeh.  Arrange the tempeh strips in the marinade and marinate for about 30 minutes.  Heat oil over medium heat in heavy based frypan.  Fry tempeh slices for about 20  to 30 minutes until a deep golden brown with a little charred edges.  (I can just fit the slices from a packet of tempeh in my very large frypan but if you can't have them all lying flat in your frypan, you might need to do two batches.)  Retain any marinade left in the container for the plum and mustard sauce or other soups and stews.

Blend all the ingredients and then heat in a small saucepan.

*I stew my plums with honey but other sweeteners such as maple syrup or brown sugar work just as well for a vegan version.

Simmer all ingredients in a small saucepan for 15 minutes.  Blend.  Mix in yoghurt, black pepper and smoked paprika.  Great served in a mug alongside cheese on toast.

On the Stereo:
Little Victories: Wild Pumpkins at Midnight
Posted by Johanna GGG at 23:08