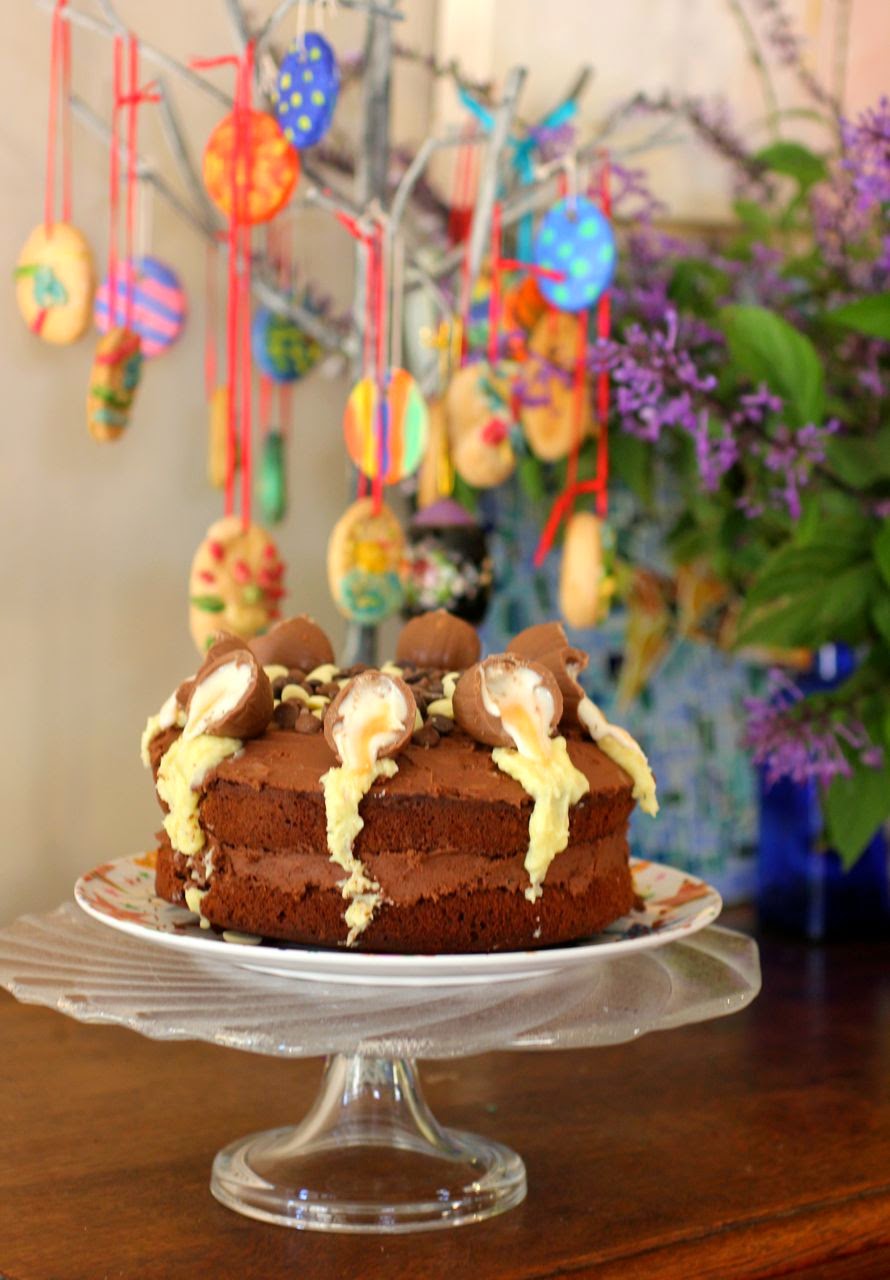 It may seem rather late to be posting an Easter cake.  Easter was over a week ago.  However I started my blog seven years ago with a birthday cake for my husband, E.  Ever since I have had a blog tradition of posting his birthday cake to celebrate my blogiversary.  We usually share a cake with my family.  This year due to the craziness of school holidays, Easter and ANZAC Day in April, we took a cake to Easter lunch to celebrate his birthday with family. 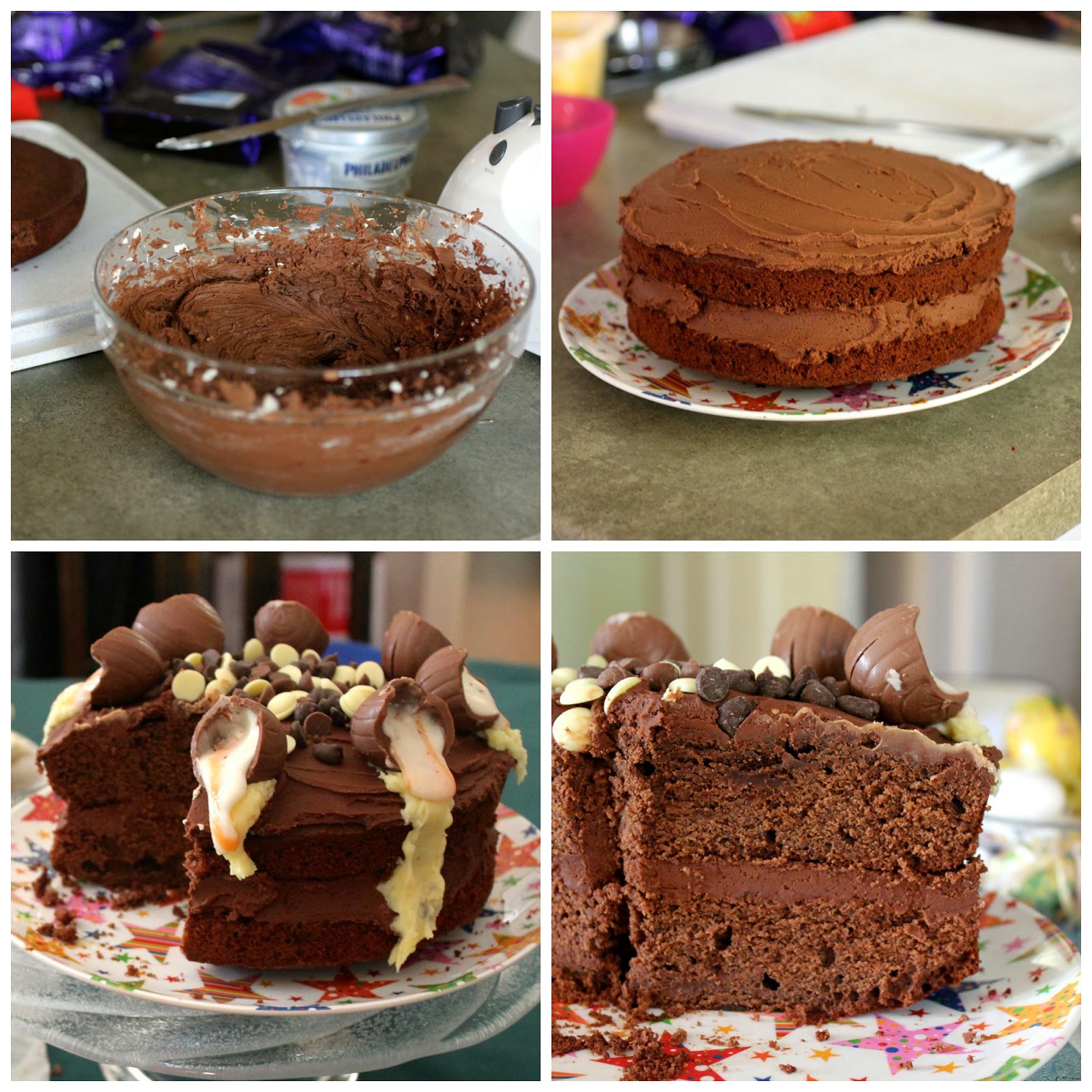 I had had plans for a fun cake for E's birthday - but as we had decided to celebrate it as part of Easter lunch, as soon as I saw Karen's cake on Lavender and Lovage I wanted to make it.  There was the added bonus that is was spectacular without requiring too much work down at my mum's place where we were having lunch. 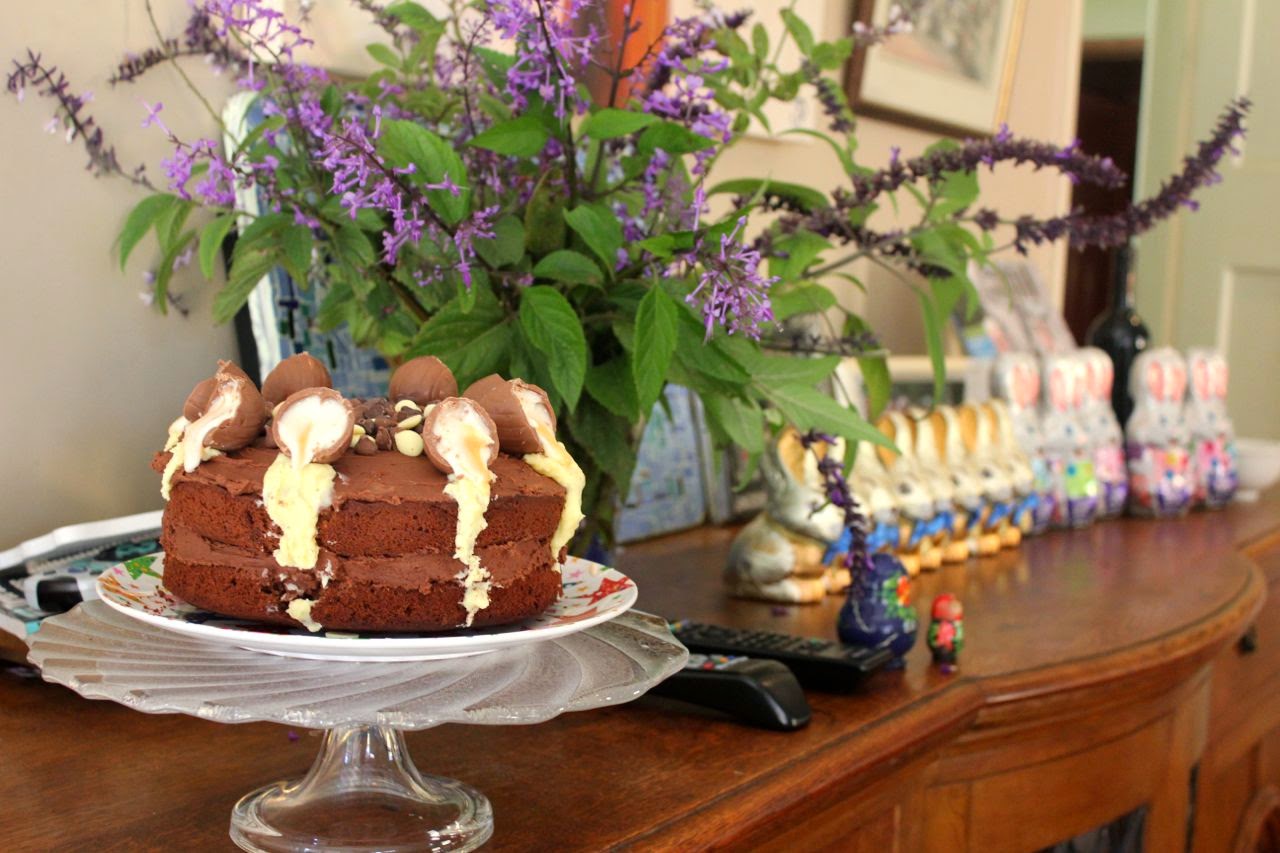 I have reproduced the recipes I have used.  I made a few changes, including making my own chocolate and cream cheese frosting because I couldn't find the ready-made one Karen suggested.  (Even though it had been there other days.  Grrrr!)  Mine was a bit less spreadable but tasted lovely. 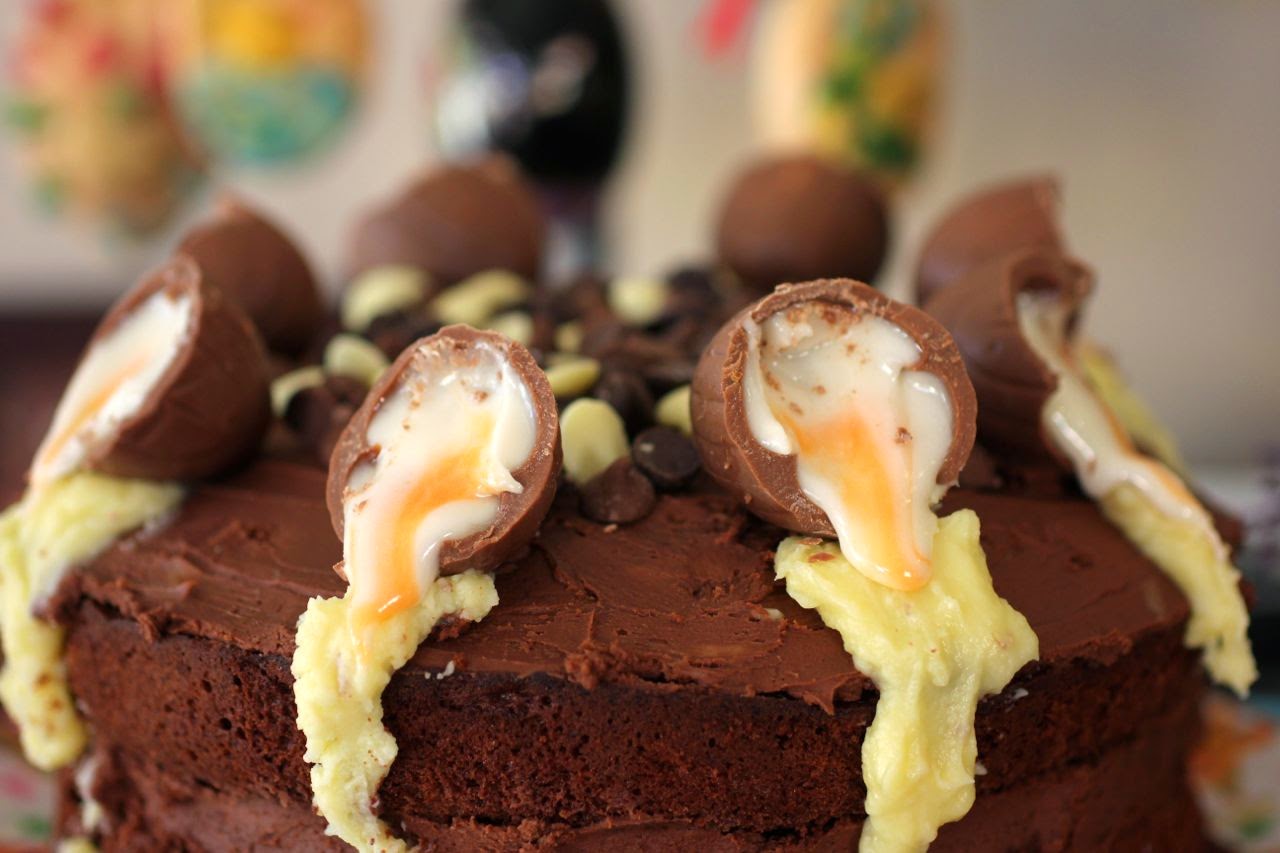 I also had problems with the white chocolate drizzle.  I melted the white chocolate in the microwave and it was never drizzly enough.  My mum later suggested sitting it over a bowl of boiling water to keep it from setting.  I added some cream to make it go further but it still was hard to get to run down the sides - it just wanted to roll down in dollops.  We also wondered about using cream instead of white chocolate to match the inside of creme eggs.

Speaking of which I found not all the creme eggs oozed as they should but there was no shortage of volunteers to help dispose of recalcitrant eggs. 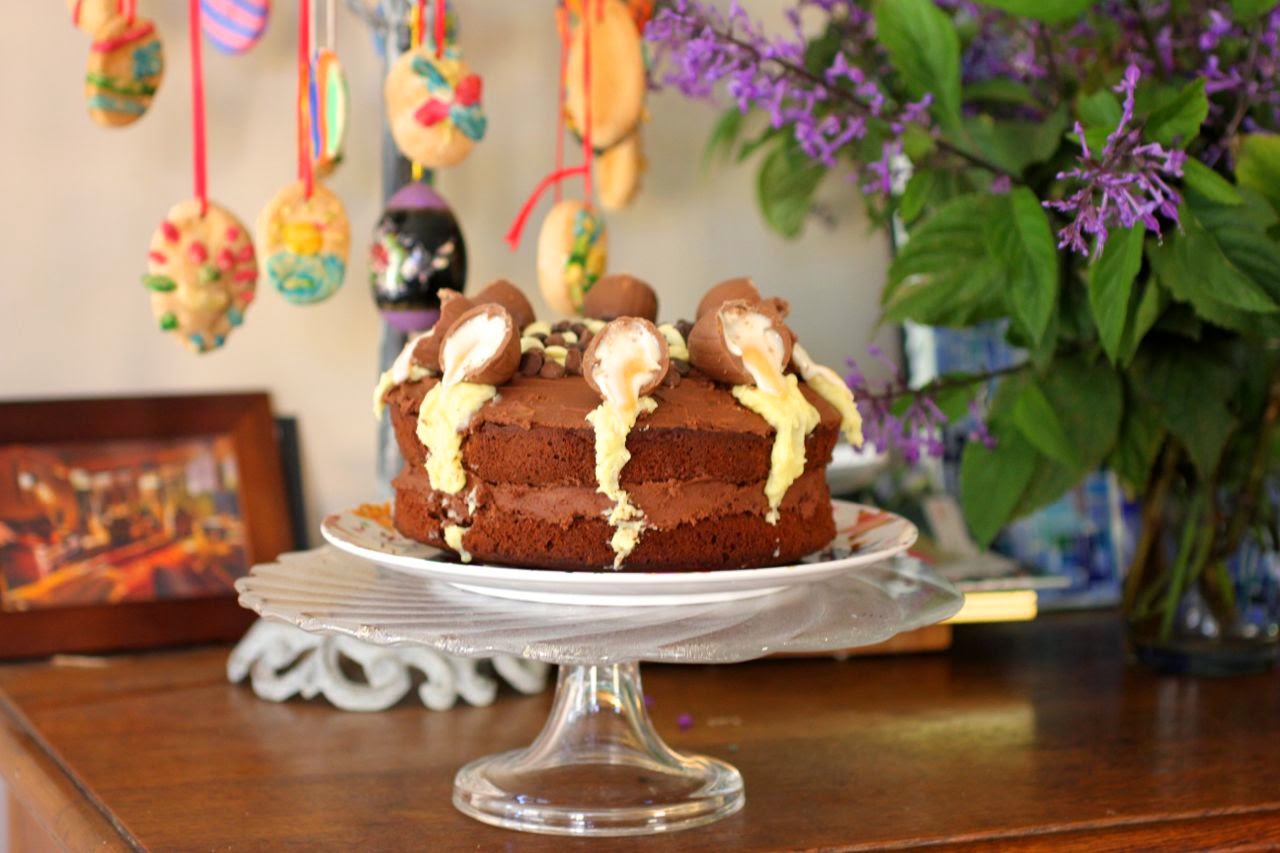 The cake looked great on the Easter sideboard with the salt dough eggs we made at home and the dough eggs my nieces made.  It was very dense and very intensely chocolate.  This made it excellent for sharing.  Just a small slice was enough.

E later commented that the cake was more my sort of thing than his.  But it was Easter.  That means celebrations, chocolate, and spectacle.  It was also my brother in law's birthday and my blogiversary.  Poor E didn't get his own cake this year.  I have promised him a boring vanilla cake soon.  Everyone else was suitably impressed. 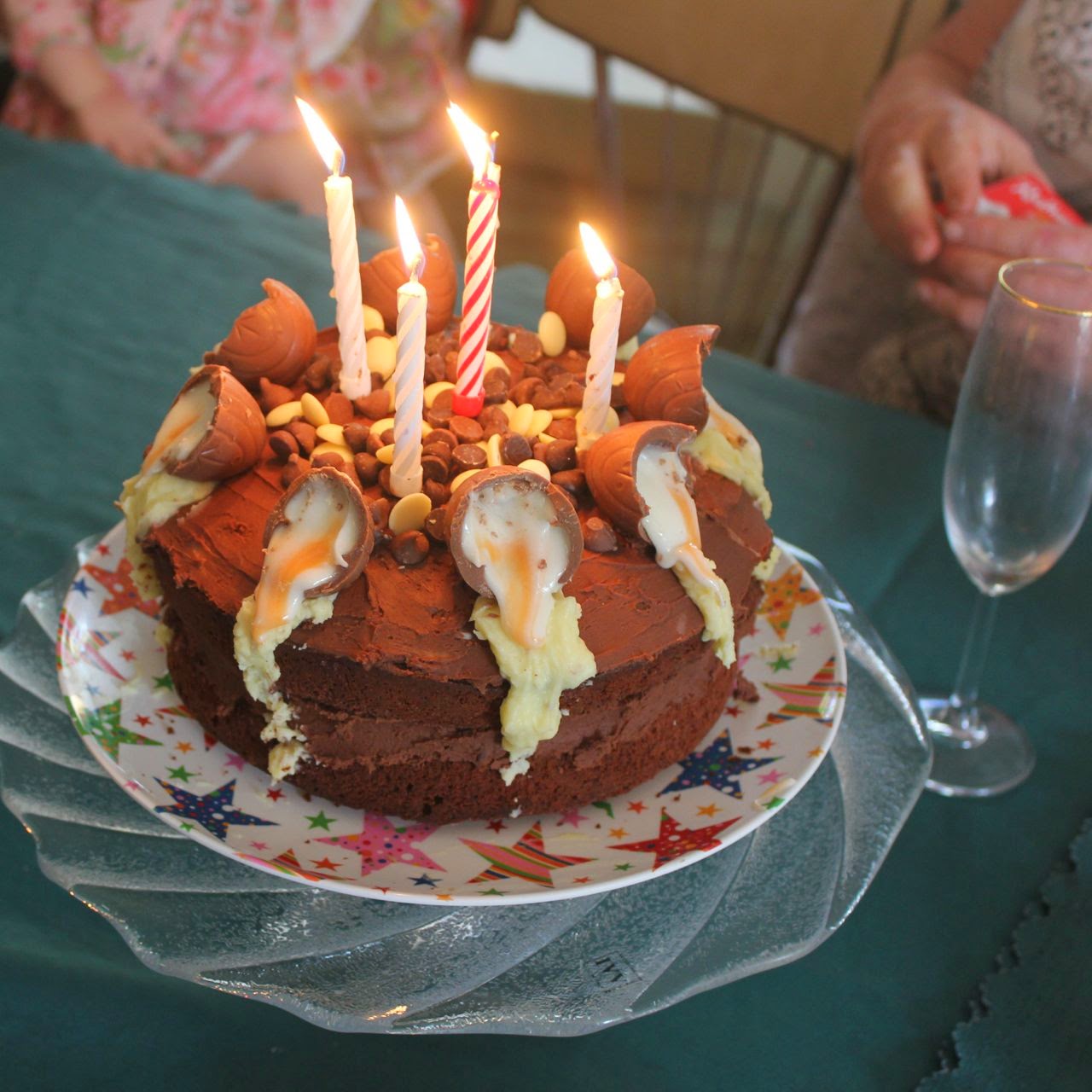 As for the seventh anniversary of my blog, I can't believe it has been so long but somehow I am still going.  I do a round up of changes on my blog at each New Year so I wont repeat it all here.  However I will just note that I took away my wallpaper background recently.  It felt a bit tired.  White seems the modern thing to do.  (You can see how it used to look on the page on my previous blog designs.)  I am still not sure if it will stay like that.  But change is nature of blogging.  What do you think of the white look?

To make the cake, mix all ingredients together in a powerful mixer OR if you have less power beaters like mine, beat together the butter and sugar until creamy, beat in the eggs, then yoghurt, then remaining dry ingredients until the batter is creamy and quite thick.

Tip batter into prepared cake tins and smooth the surface.  Bake for 30 to 40 minutes.  (It took me 40 minutes.)  Cool cakes before decorating.

Melt white chocolate with a tablespoon of cream and drizzle in blobs down the side of the cake.  (To keep the white chocolate really well melted have it sitting over a bowl of hot water so it doesn't start to set.)  Use a sharp knife to cut the Creme Eggs in half.  Arrange 8 to 10 halves around the edge of the cake and scatter choc chips over the cake.

On the Stereo:
A history of American folk: Various Artists
Posted by Johanna GGG at 21:09