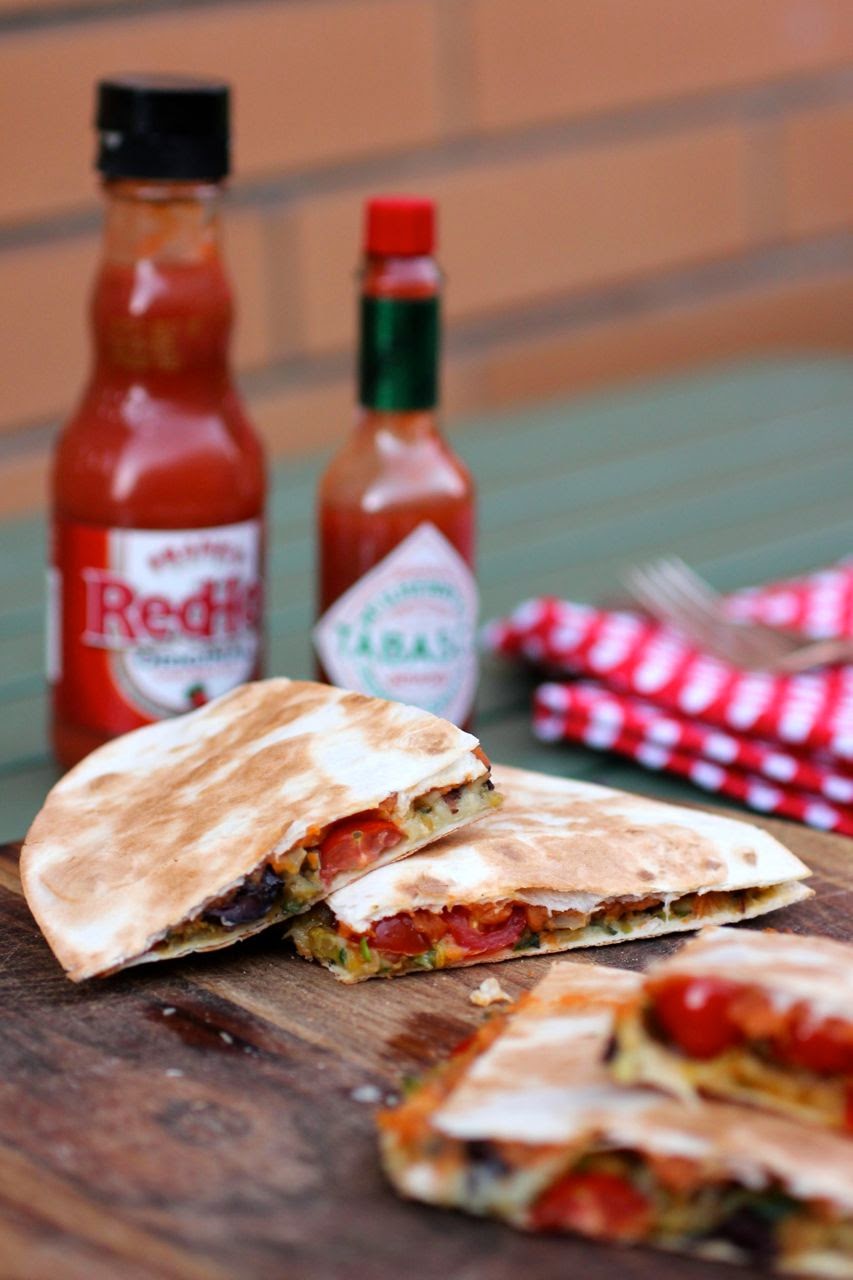 Last week saw very little cooking in my kitchen.  Last night I realised that I had been so busy and poorly that I had only cooked one meal during the week.  I went to the movies, attended Sylvia's first school concert, had parent teacher interviews, had meetings and babysat my niece.  It was good to go out for dinner and eat meals from the freezer, when I wasn't so sick that I could only eat vegemite on toast.  My fridge however is still full of vegetables.  So last night I made some rather good quesadillas. 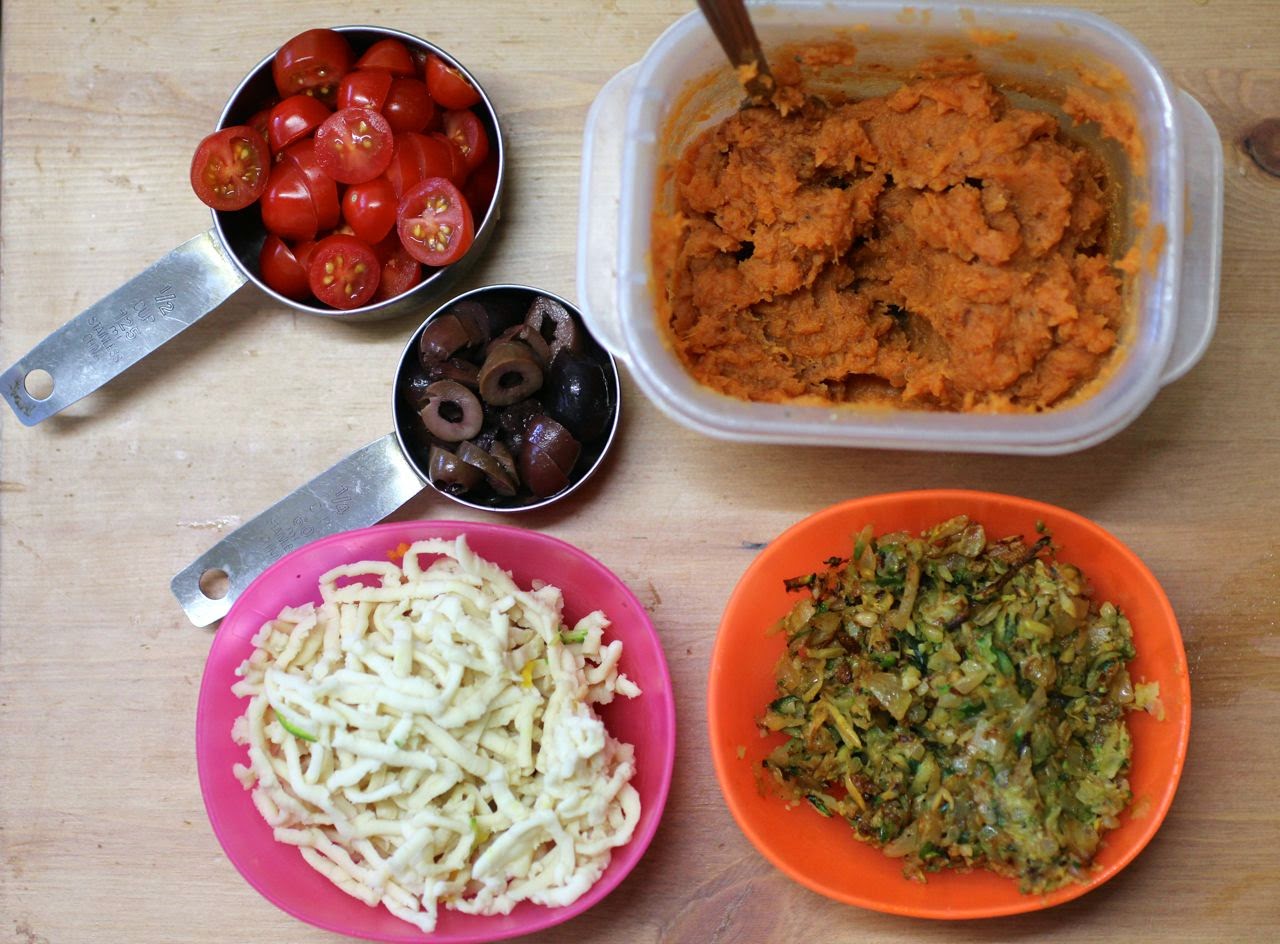 Quesadillas ticked a few boxes.  They were a good way to try some of my new Vegusto vegan mozzarella cheese, they used up some of the vegies that were begging to be put out of their misery, and they were fairly easy.  The original recipe for Zucchini, Olive and Cheese Quesadillas from Cooking Light used low fat mozzarella and feta cheese.

I didn't have any feta and wanted to keep it vegan.  So I used a sweet potato that I half cooked about a week ago.  It was looking expectantly at me every time I opened the fridge.  I also had plenty of cherry tomatoes and some zucchinis from the farmers market.  And I couldn't resist adding my favourite spice, smoked paprika. 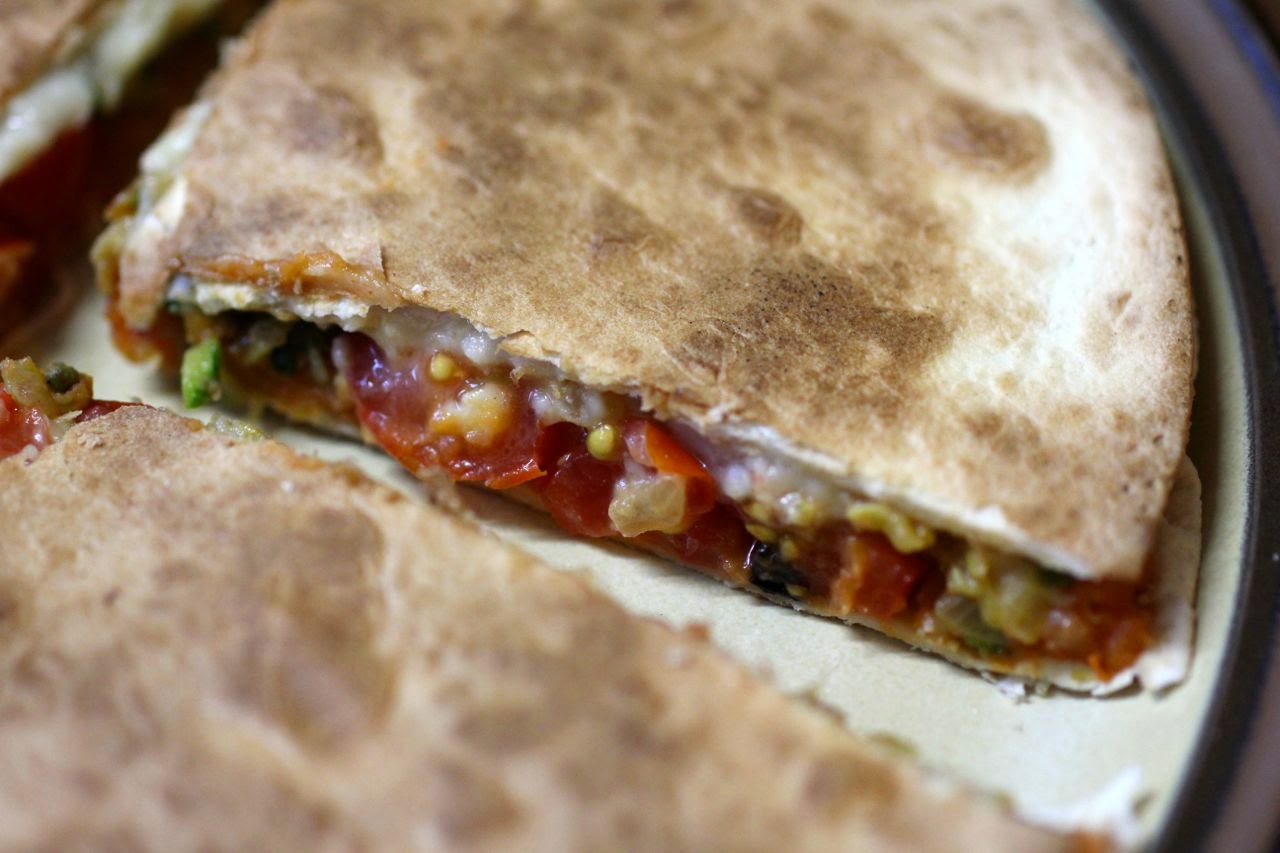 The sweet potato was a good choice in adding more vegies and helping the quesadilla stick together.  I've had problems with quesadillas holding together in the past but these flipped over with no problem.  In fact, with the sweet potato, you could probably omit the cheese altogether or even mashed in a few beans instead.

It was my first time using Vegusto.  It grated ok but clumped together when I tried to sprinkle it on my tortillas.  I could taste the meltiness from time to time in the quesadillas but I don't think it was the best way to feature it and look forward to using it in more meals. 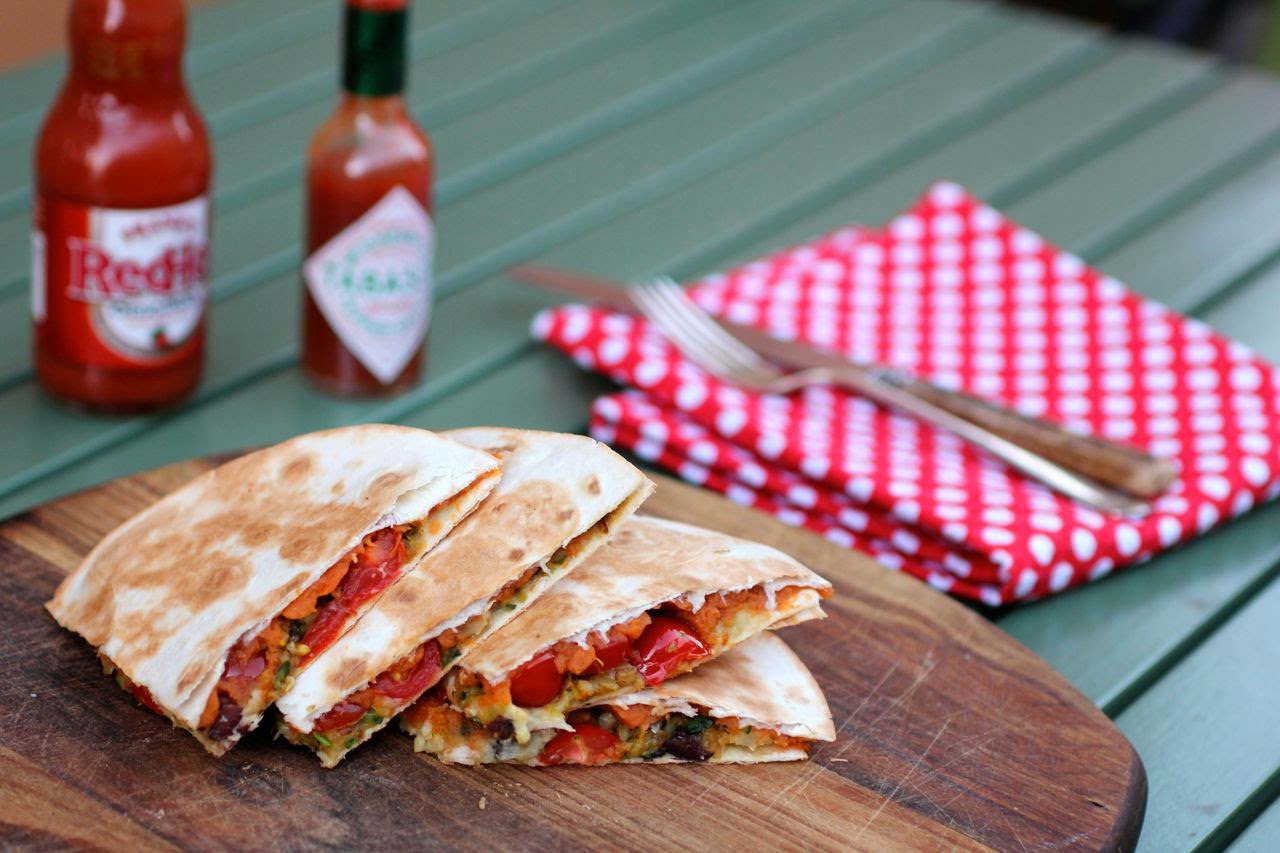 I had thought of making some refried beans to have on the side but I didn't have the energy.  I found that the quesadillas made a satisfying meal without them.  E said he could have eaten more.  Some refried beans and salad would make this a larger meal.  As it was, E just added some Tabasco because it wasn't quite spicy enough for him.

I am sending these quesadillas to Vanesther at Bangers and Mash who is hosting Mexican Month on the Spice Trail.

I am also sending them to Helen at Fuss Free Flavours for the Extra Veg challenge that she hosts with Michelle from Utterly Scrummy Food for Families.

Heat olive oil in a large frypan over  medium heat and fry onion and garlic for about 5 minutes or until onion is translucent.  Add zucchini and fry another 5 to 10 minutes until zucchini starts to brown.  Turn off the heat.  Mix in oregano, 1/4 tsp of smoked paprika and season with a good pinch of salt and a good grinding of black pepper.  Scrape into a small bowl and set aside.  Use a paper towel to wipe out the frying pan to be ready for the tortillas.

Preheat frypan over medium heat.  (I didn't add any oil.)  Have the mozzarella, tomatoes and olives ready.  Place a plain tortilla on the pan and scatter with half the mozzarella, half the zucchini mixture, half the cherry tomatoes and half the olives.  Top with the tortilla spread with sweet potato, with the vegetables facing downwards.  Fry for about 3 minutes or until golden brown.  Carefully flip over and fry another 2 minutes or until golden brown on the second side.  Repeat with remaining ingredients.  Cut each quesadilla into four and serve hot.

On the Stereo:
Listen, Listen: an Introduction to: Sandy Denny
Posted by Johanna GGG at 09:01