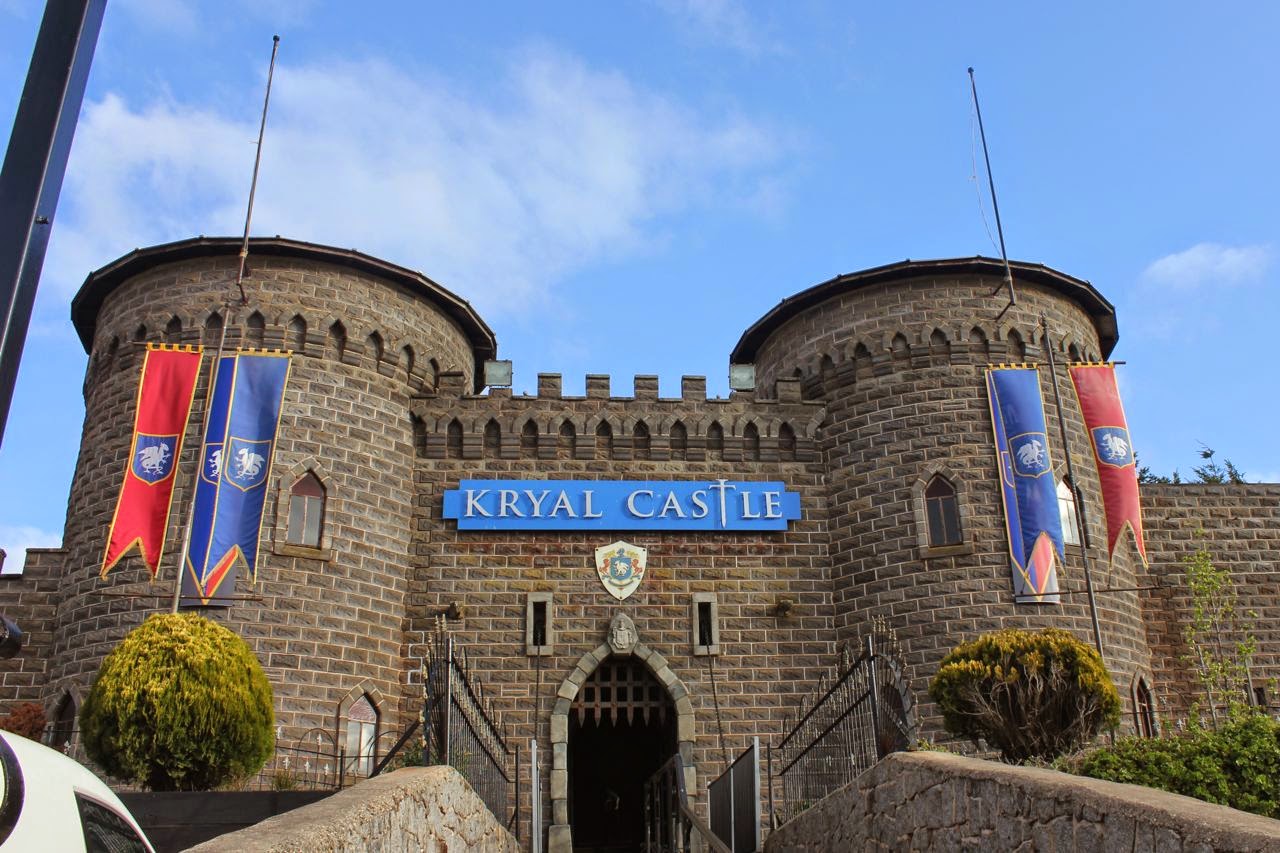 On the weekend we had an outing to Kryal Castle, near Ballarat.  If you are thinking that Australia doesn't have medieval history and historic castles, you are right.  This is a medieval fantasy adventure park that was built in the 1970s and re-opened last year after a facelift.  We had a great afternoon there.  The prices are high and the food is average but the buildings are romantic and the activities are fun, especially for kids. 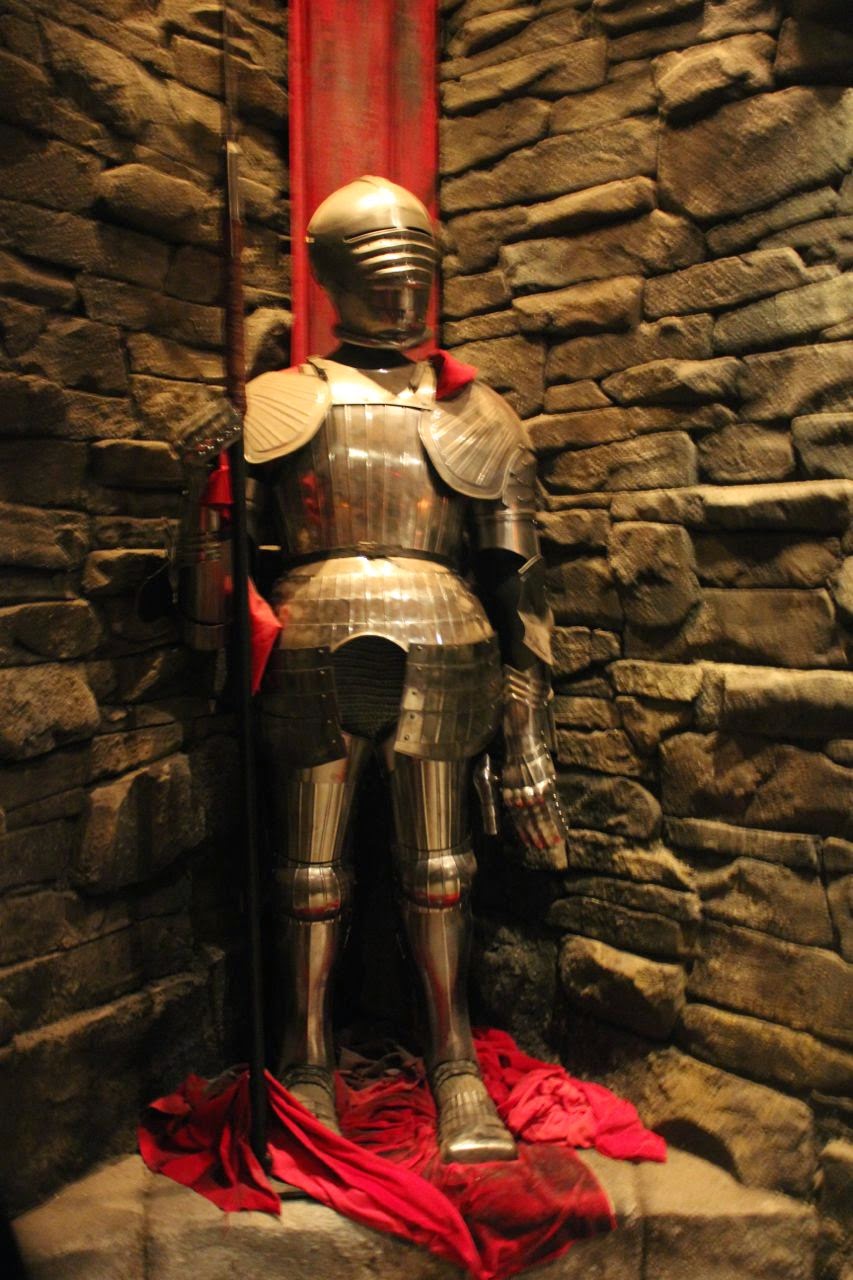 We arrived on a dreary wet morning.  The castle loomed up out of the mist as we drove towards it.  After walking across the drawbridge and being greeted by a roaring dragon that didn't even fool sylvia, we paid (gulp) $81 for two adults and a child.

The first activity was a walk through the Dragon's Labyrinth.  It was the story of the queen whose children ran away after the dragon.  Lots of dark shadows, armour and skeletons.  Sylvia found it creepy so we hurried through quickly. 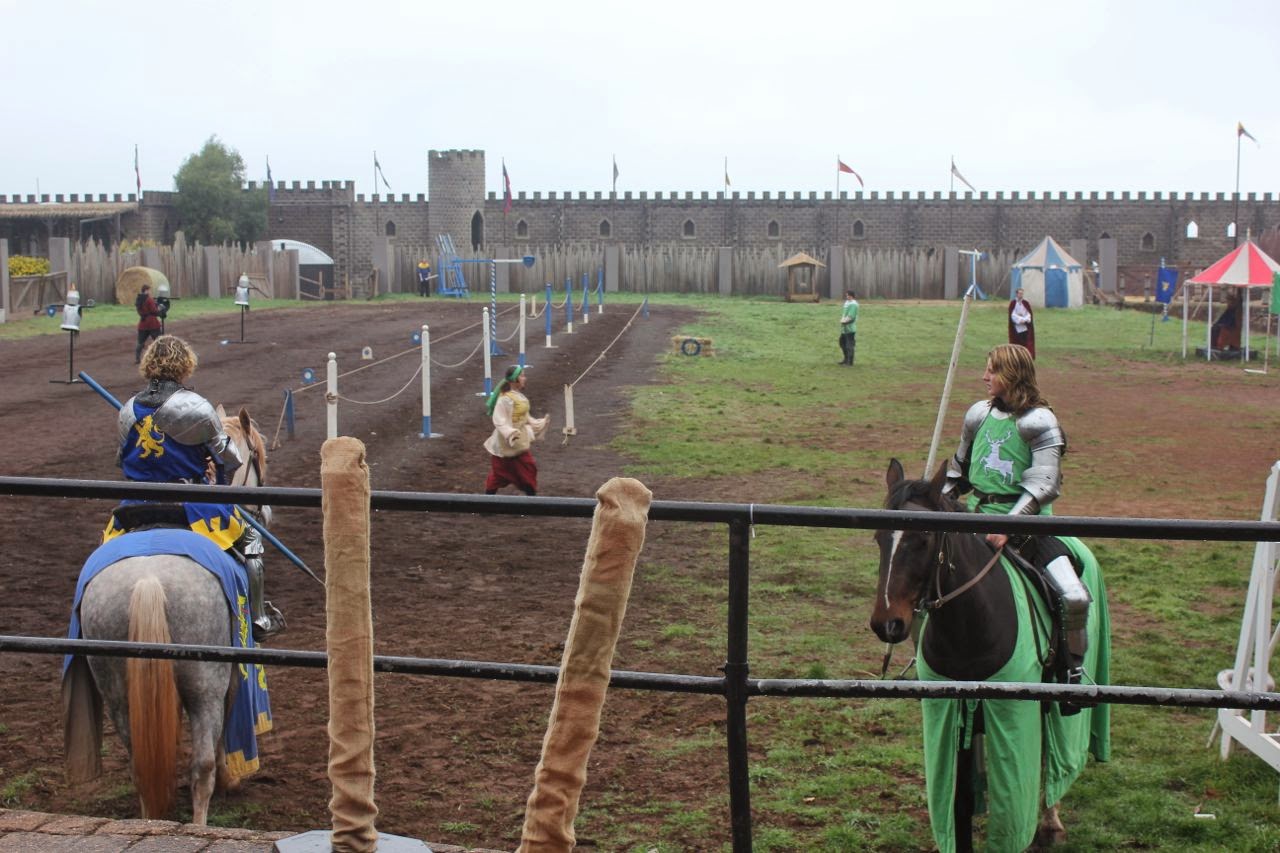 The tournament between the knights was just beginning in the Castle Arena.  So we joined the other onlookers huddled under the awnings to watch.  A few brave souls in plastic ponchos stood in the grandstands.  It was interesting but not enough of a crowd to create the right atmosphere.

Perhaps it was just that it could not live up to my memory of my first visit to Kryal Castle as a child.  That was the first time I ever saw a man hanged.  It was thrillingly terrible.  I puzzled over how he could be hanged with the thick rope around his neck and not really die.  It seems they don't do this sort of thing there any more.  I guess modern health and safety forbids it. 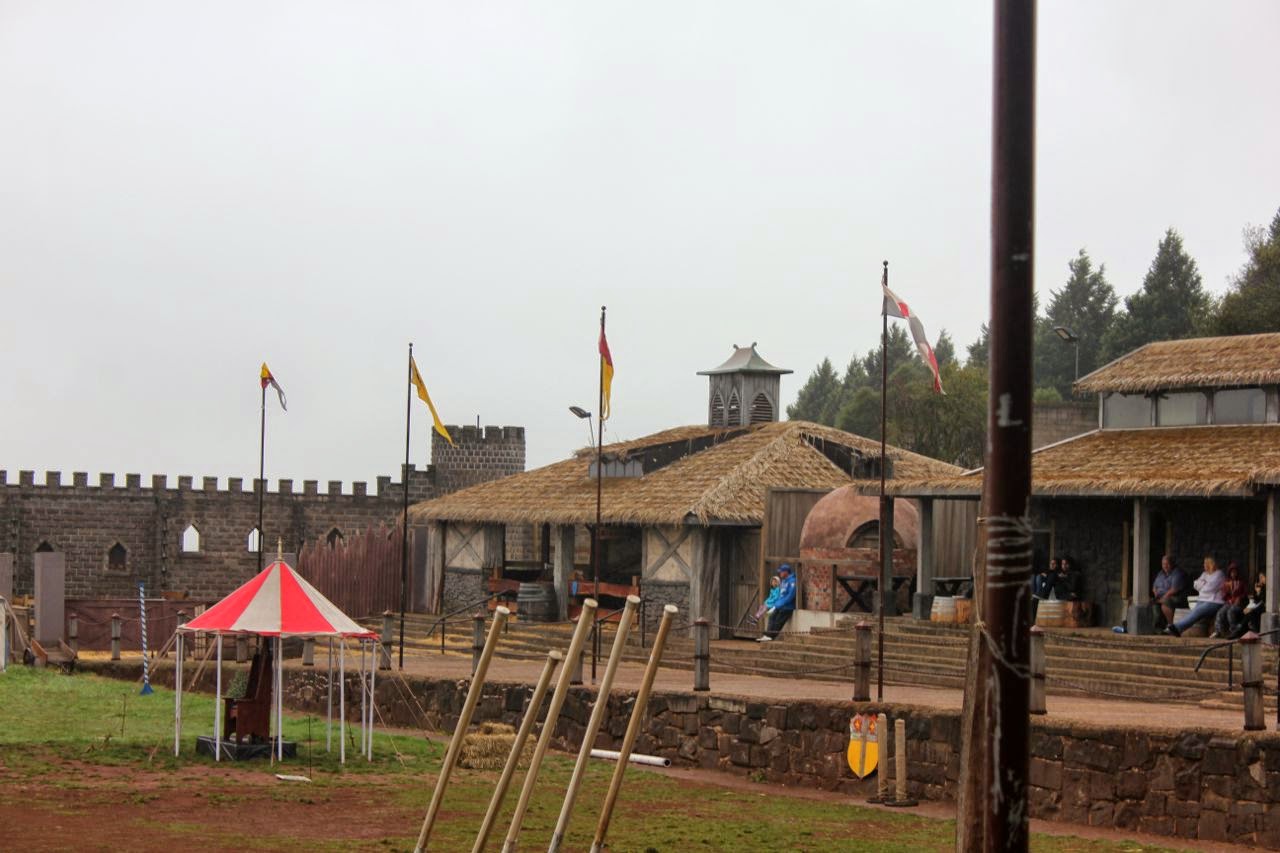 We wandered into the Village Kitchen and Alehouse in search of sustenance.  I asked what vegetarian food was on offer and was told nothing.  E asked about the spinach and cheese pastries.  The young boy behind the counter corrected himself.  Then when E asked about sausage rolls he found there were none.  In spite of the service, E's chicken pie and my pastry were both hot and good quality.  Sylvia got a hedgehog slice but just licked the sprinkles off the top. 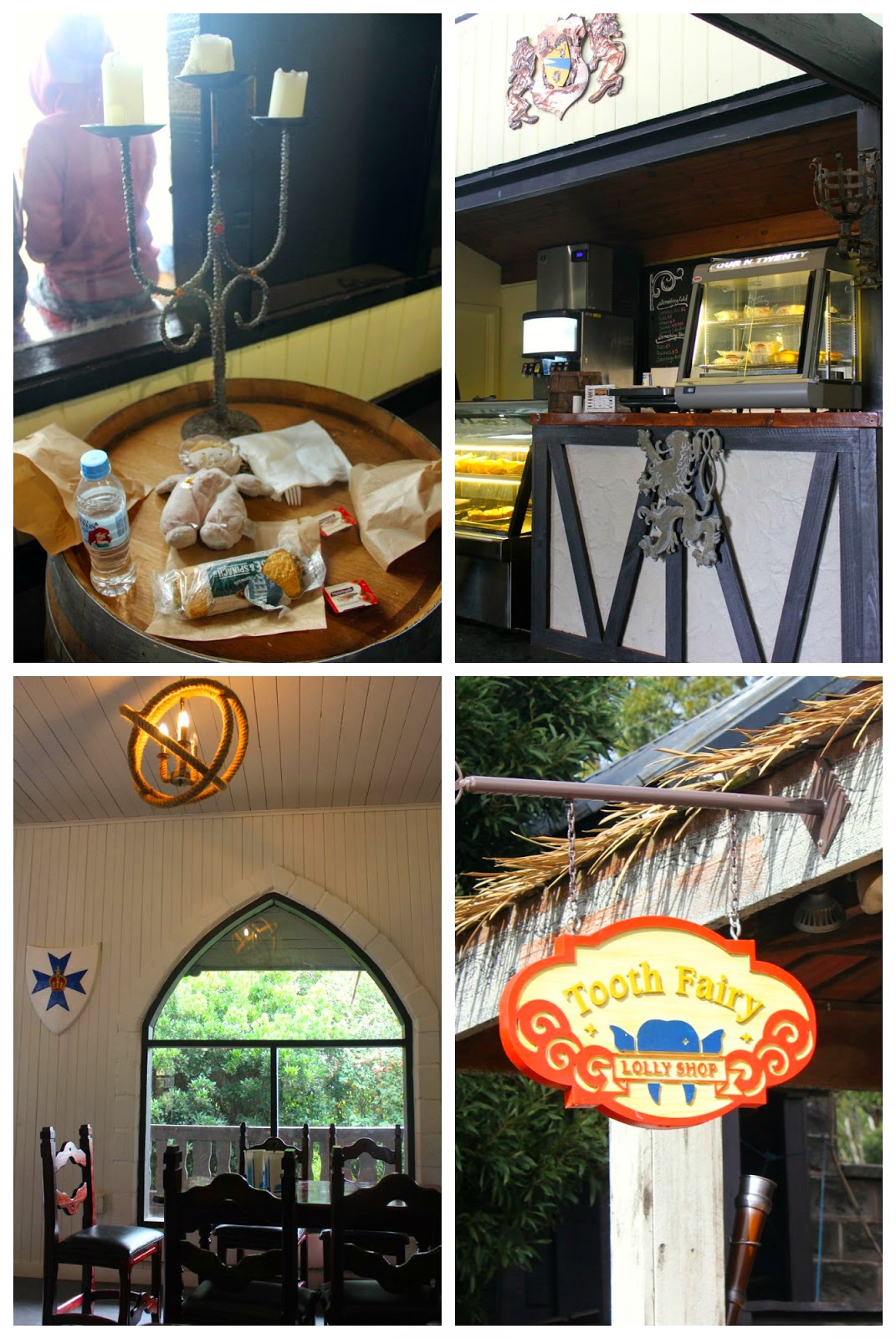 Later we went to the Mountain Inn Bakery for some hot chips.  There was also a Tooth Fairy Lolly Shop.  Overall the food on offer was not very impressive.  Fortunately I had brought along smoked almonds, ANZAC biscuits and apples.  I quite liked the roughly hewn stumps of wood in the Alehouse and the royal chairs in the Bakery.

While we ate our hot pastries in the Alehouse, we watched the knights jousting outside.  I liked the jousting because it was reminiscent of The Court Jester.  (Though there was no flagon with the dragon or chalice from the palace.) 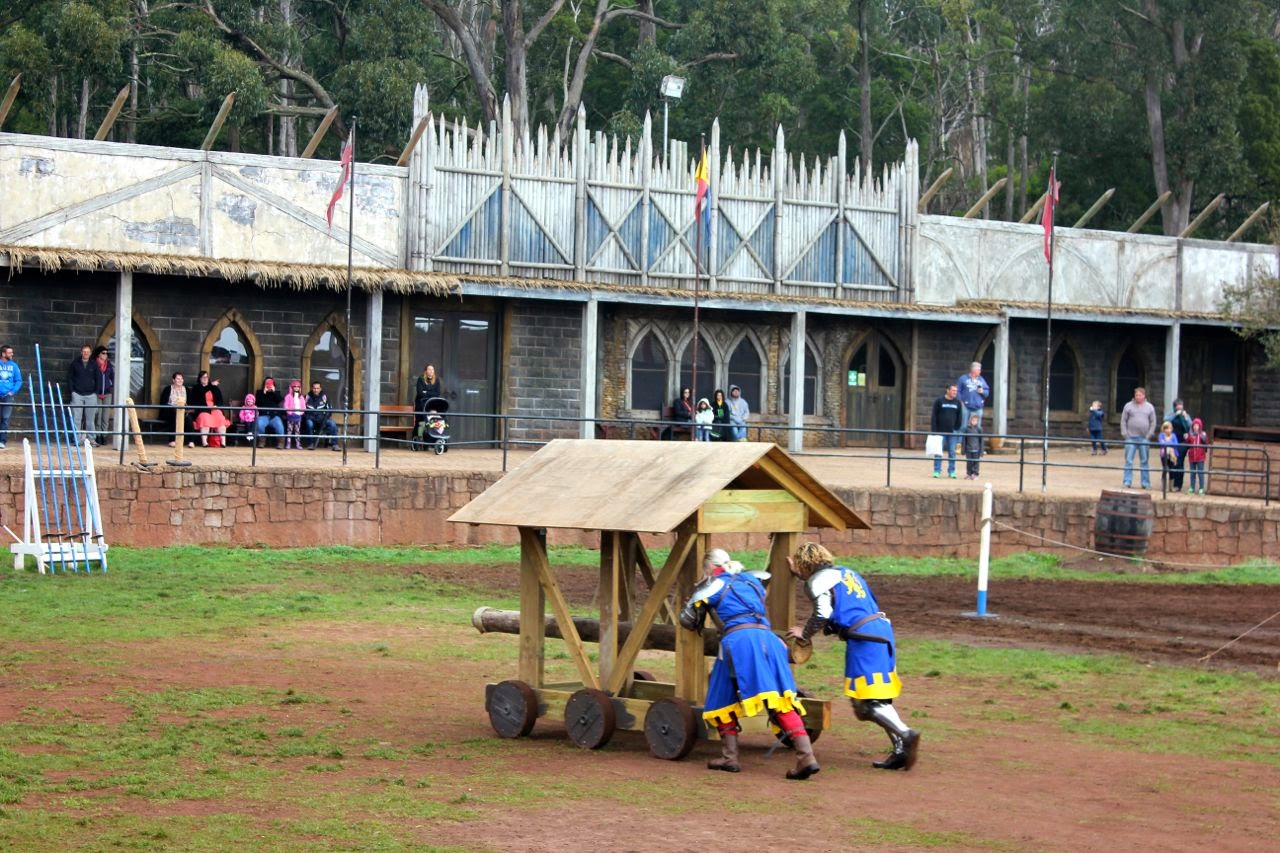 Then suddenly there was great drama when a knight apparently kidnapped the princess and the knights bashed in the doors with a battering ram.

Actually I found it hilariously silly.  I preferred to view it from a feminist perspective of the female knight rescuing the princess from the brutal men who then had to bring out their biggest phallic symbol to rescue her! 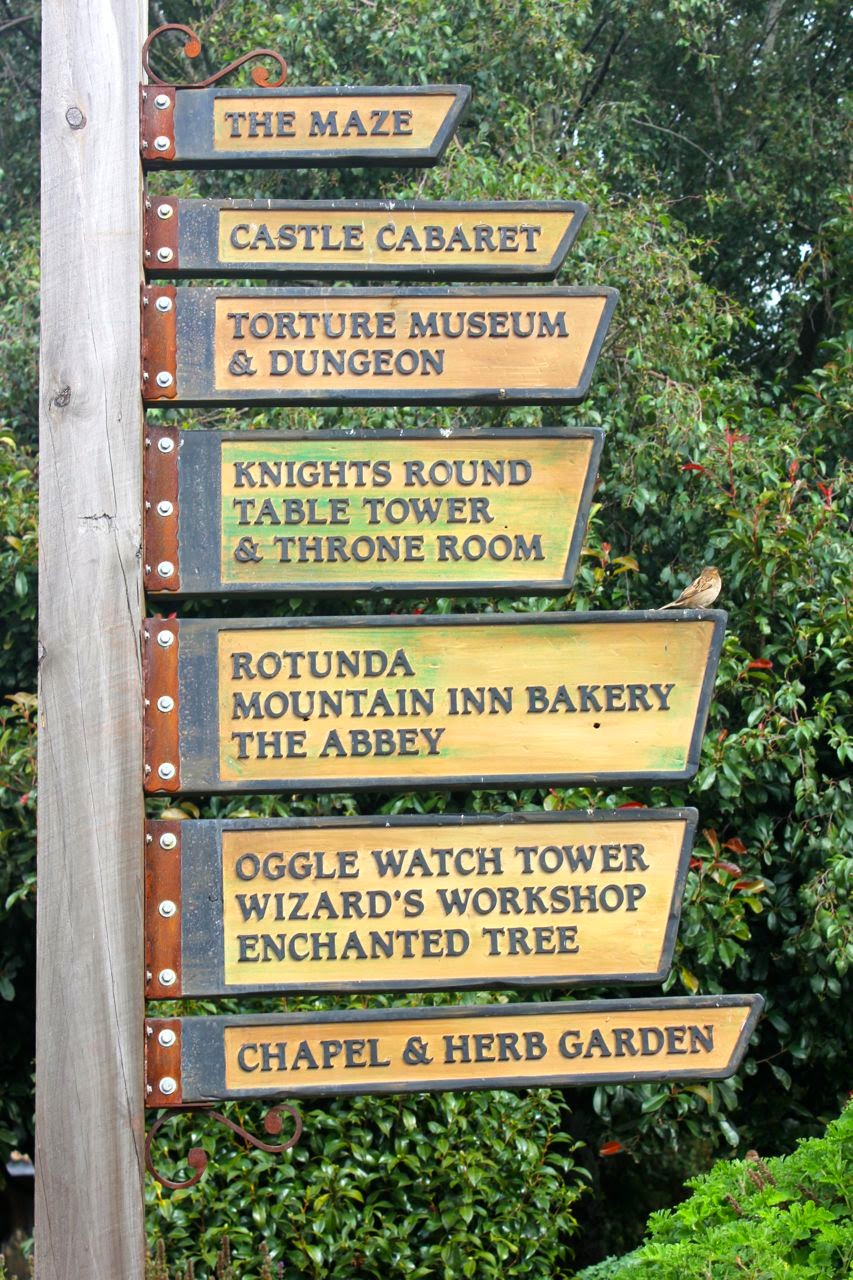 By now the rain was off.  Hurrah!  That meant we could explore.  There are a few shops for browsing, the most interesting being the man who handcrafted wands.  I loved the castle and dragon themed playground for the children.  Some of the slides were a bit wet but it was fun to see Sylvia crawling out of a dragon mouth. 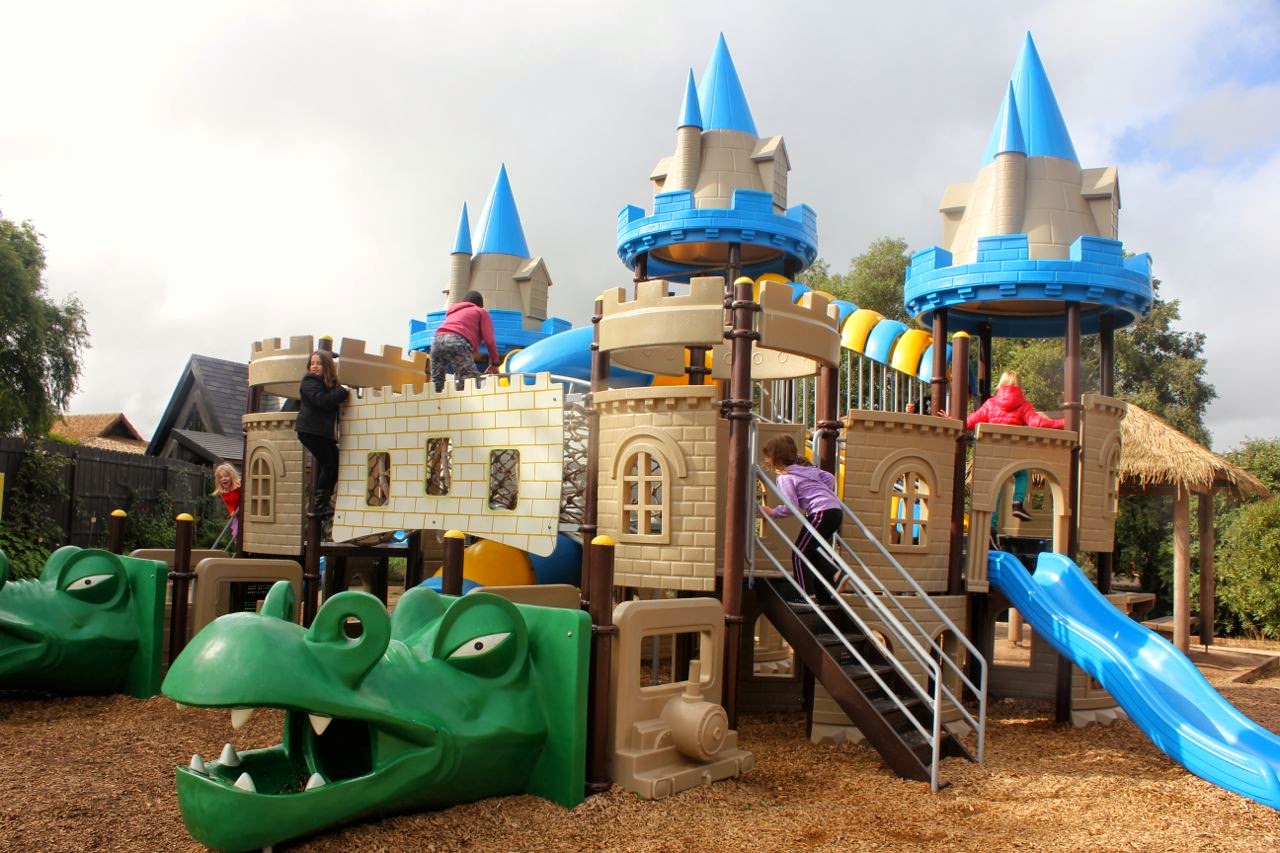 I loved all the little details.  No one would be fooled into believing this really was a Medieval castle (or that here-be-dragons) but you could easily imagine it was.  It is set up so that you could live out all your fantasies.  Sit on a throne?  Why of course, sir!  Sword fights and archery?  Step this way, good sire!  Be locked in the stocks and have rotten fruit thrown at you?  Um ... well there were stocks but no baskets of rotten fruit to be found.

They also do accommodation, functions and weddings.  It would be fun to have the work Christmas party there and put the managers in the stocks.  Some people just like to come and wander about like the guy in the long black cape that initially I thought was one of the actors.  Perhaps he was just living out his fantasy of being in Lord of the Rings.  Albeit surrounded by gum trees. 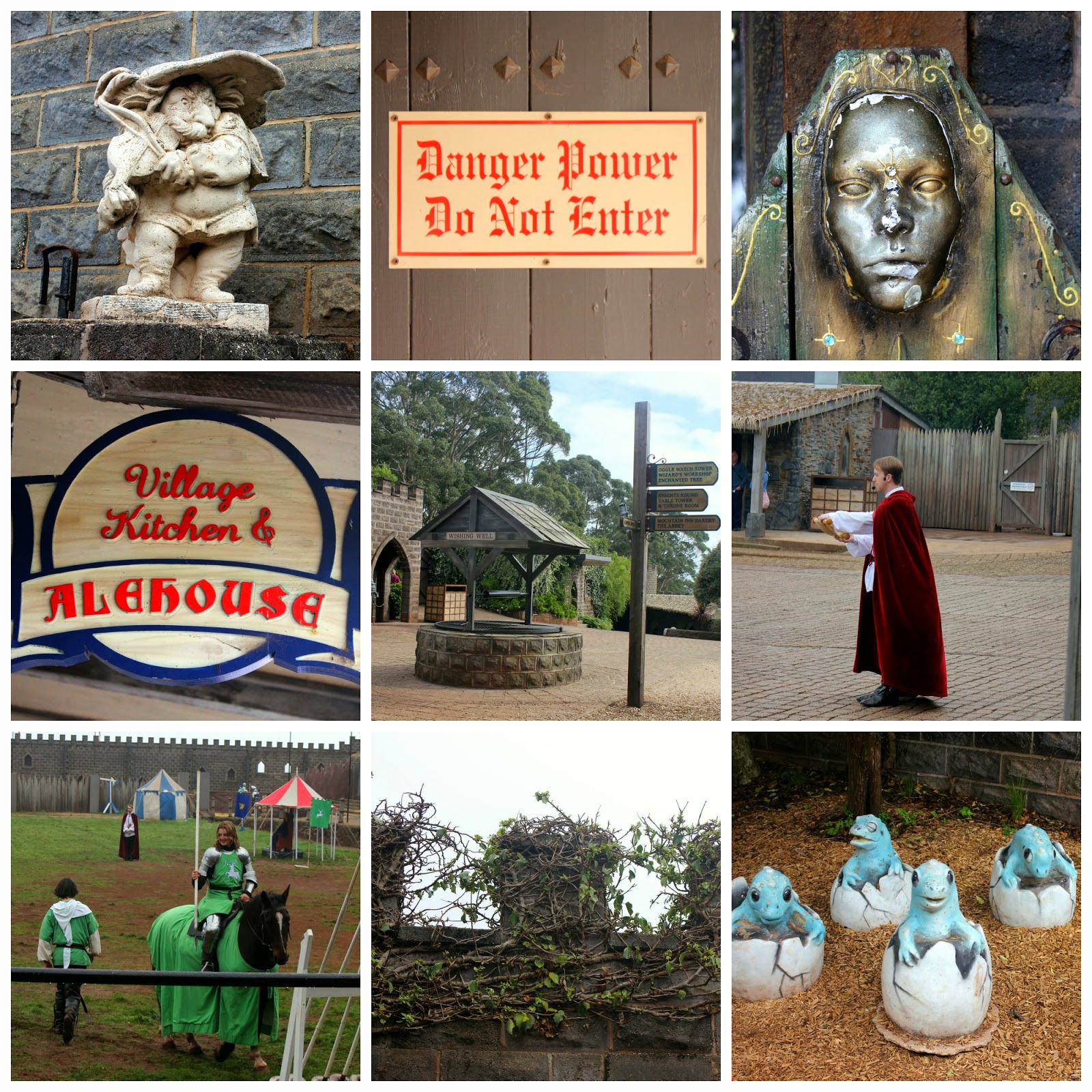 One of my favourite places was the maze.  E and I had our heads above the walls but it was confusing to see each other a few walls away and still not be able to work out how to get there.  We were relieved to find the exit so we could go to the pantomime.  It was a fairly basic affair but the three actors had lots of fun and drew in the audience.  We had a good laugh. 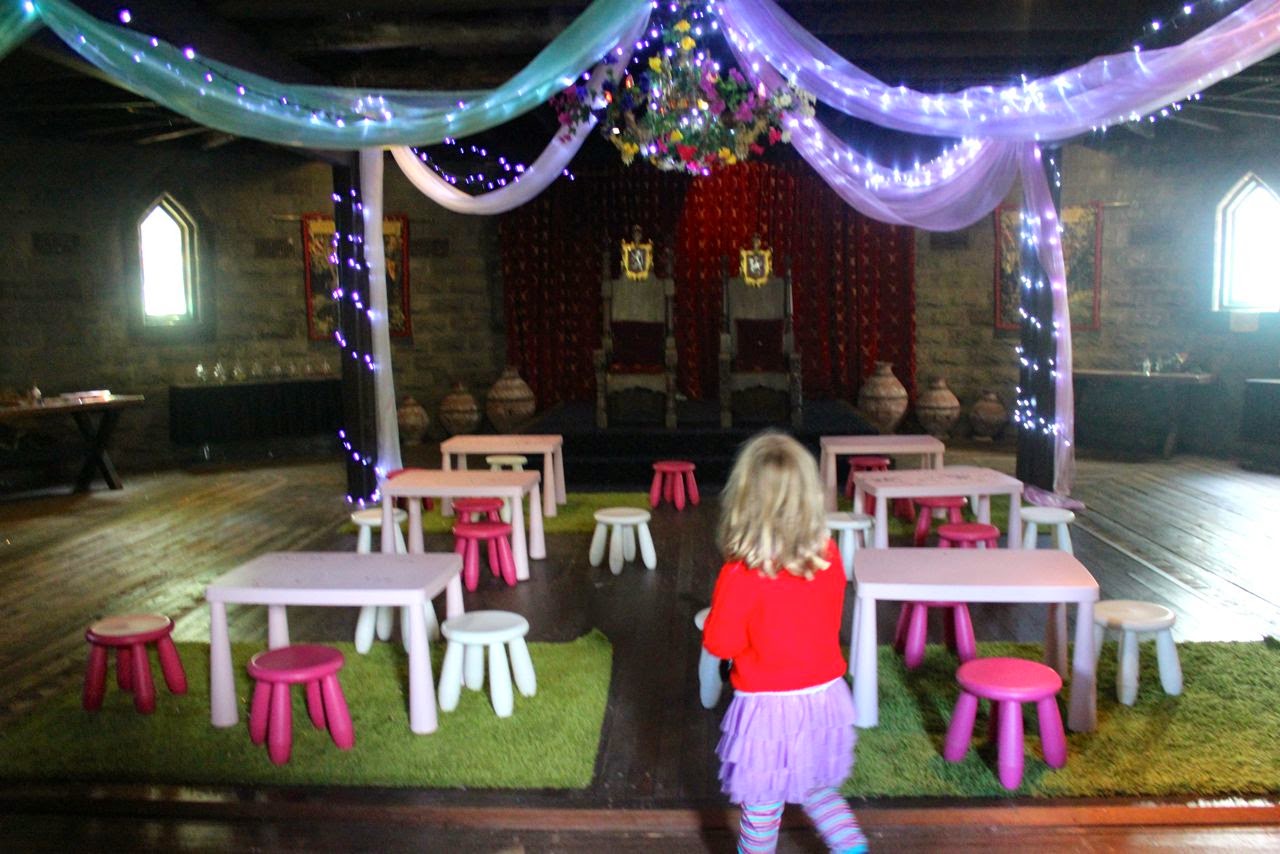 Craft activities are held in the morning and afternoon.  At first I was bemused by the calligraphy activity set out on the roundtable as we entered.  Sylvia is still only learning to write.  Once I asked I found there was face painting, perfume making, bracelet threading and a cardboard crown to decorate.  Must of it upstairs in the Throne Room.  Clever Sylvia bought some stickers that she used to decorate her crown so we didn't have one with wet glue and glitter to take home. 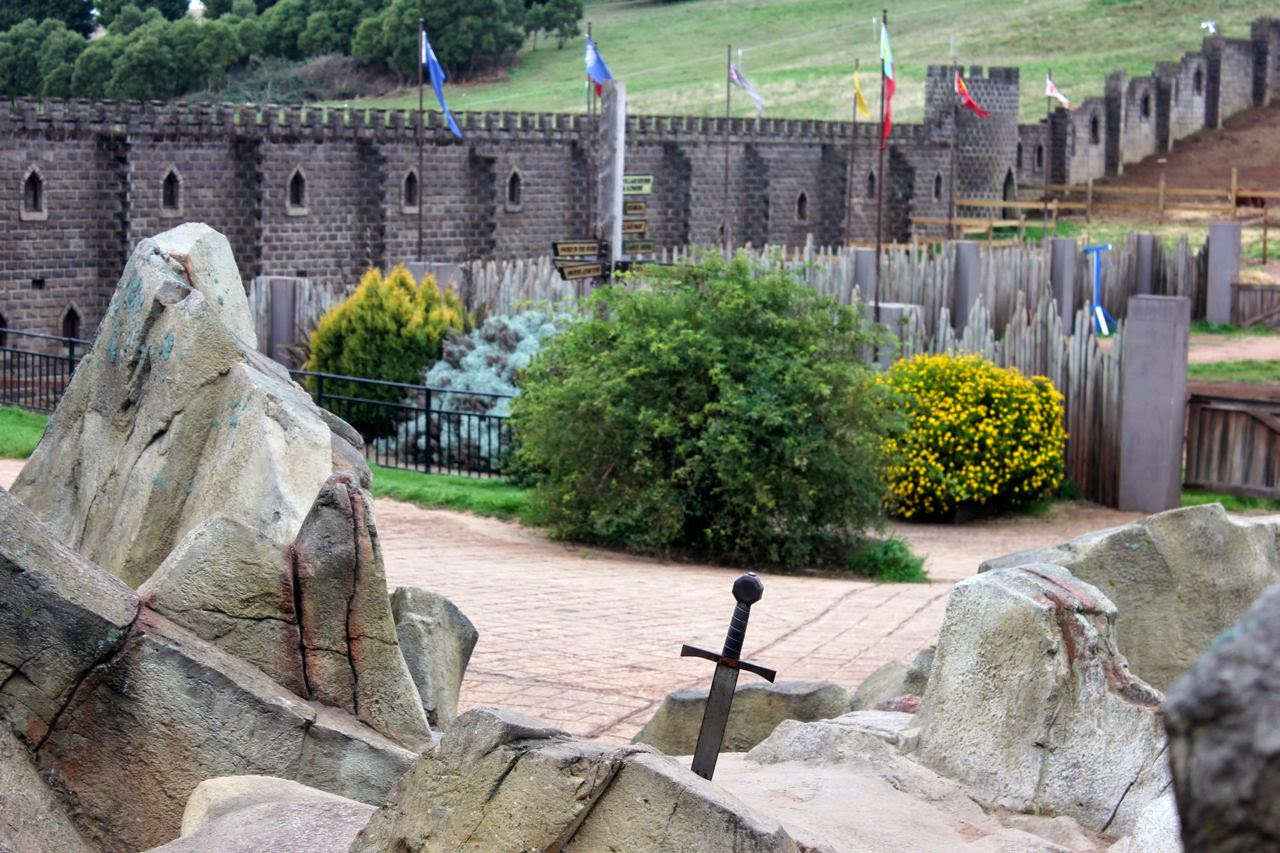 While Sylvia did craft, E went to the torture museum.  Which is his idea of fun!  Then it was time for more fun with stocks and cages, to read silly epitahs in the graveyard, have a go at pulling the sword out of the stone and one last glance at the crenellated walls and thatched rooves before heading over the moat back to the carpark and reality.