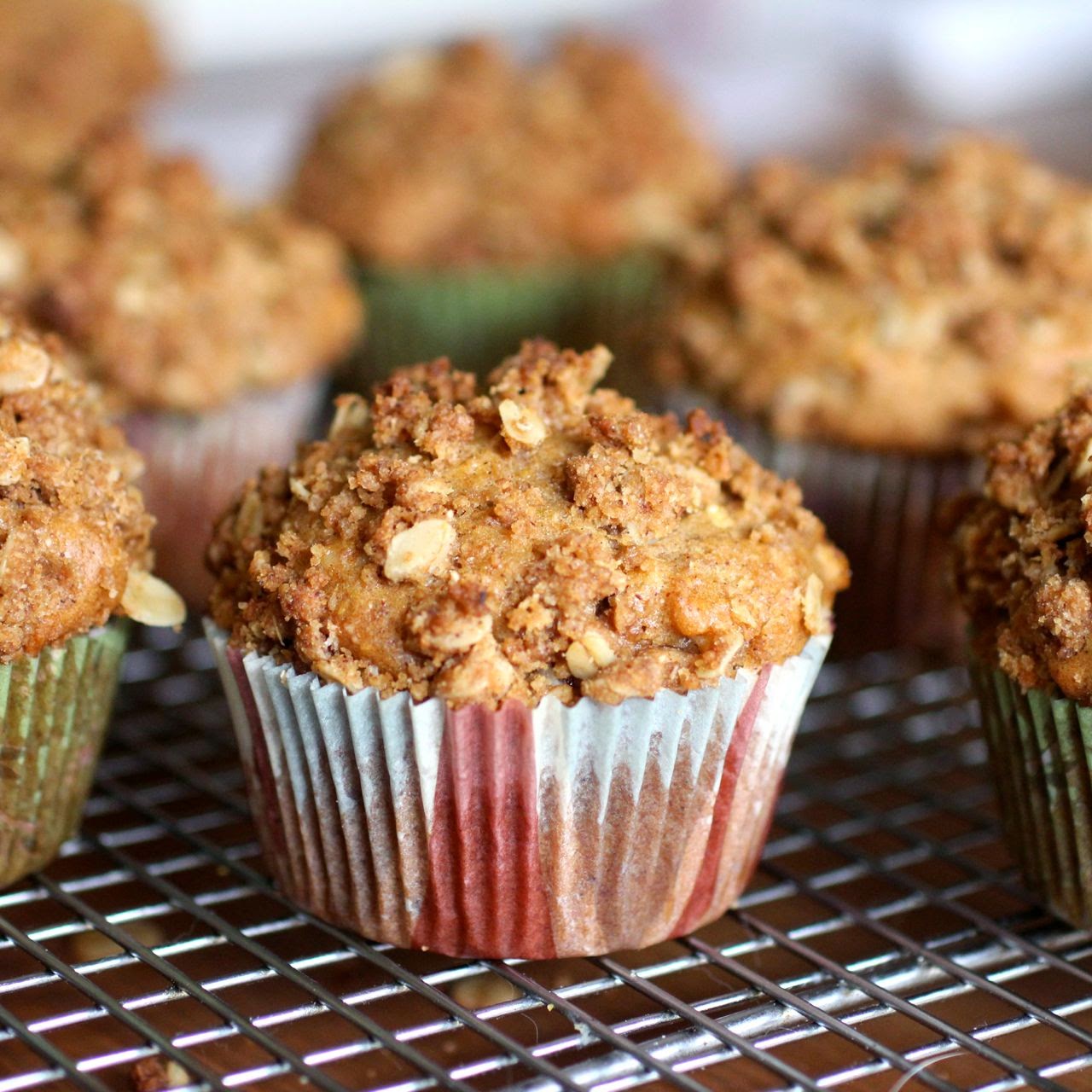 Yesterday I started my day by baking muffins to take to a friend's place.  When I had planned to bake Spiced Apple Crumb Muffins I had been excited that I had all the ingredients to bake from a Gwyneth Paltrow cookbook from the library.  I hadn't counted on Sylvia wanting to play at 5.30am that morning and my friend's little girl being too sick for us to visit.  Serendipitously, I had another friend who appreciated the muffins.  All was not lost. 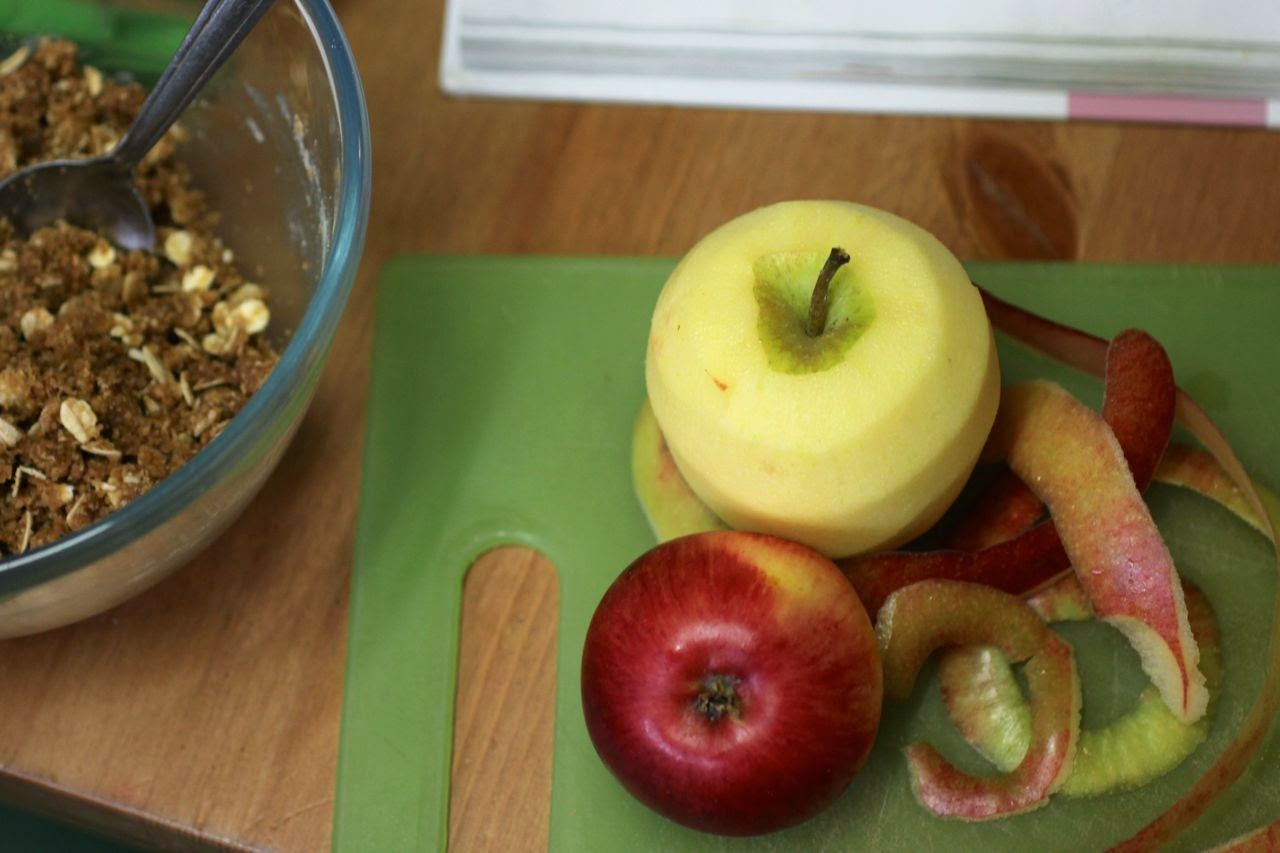 Apples are in season right now and this recipe seemed perfect.  Except I didn't really have all the ingredients.  I had most of them.  And what I didn't have, I was able to substitute.  Gwyneth uses spelt flour.  I have used it in the past but don't regularly have it in the kitchen.  There are only so many flours I can fit in my pantry.  I added more regular wheat flour because the mixture seemed so thin.  I was out of wholemeal flour so I used a little wheatgerm. 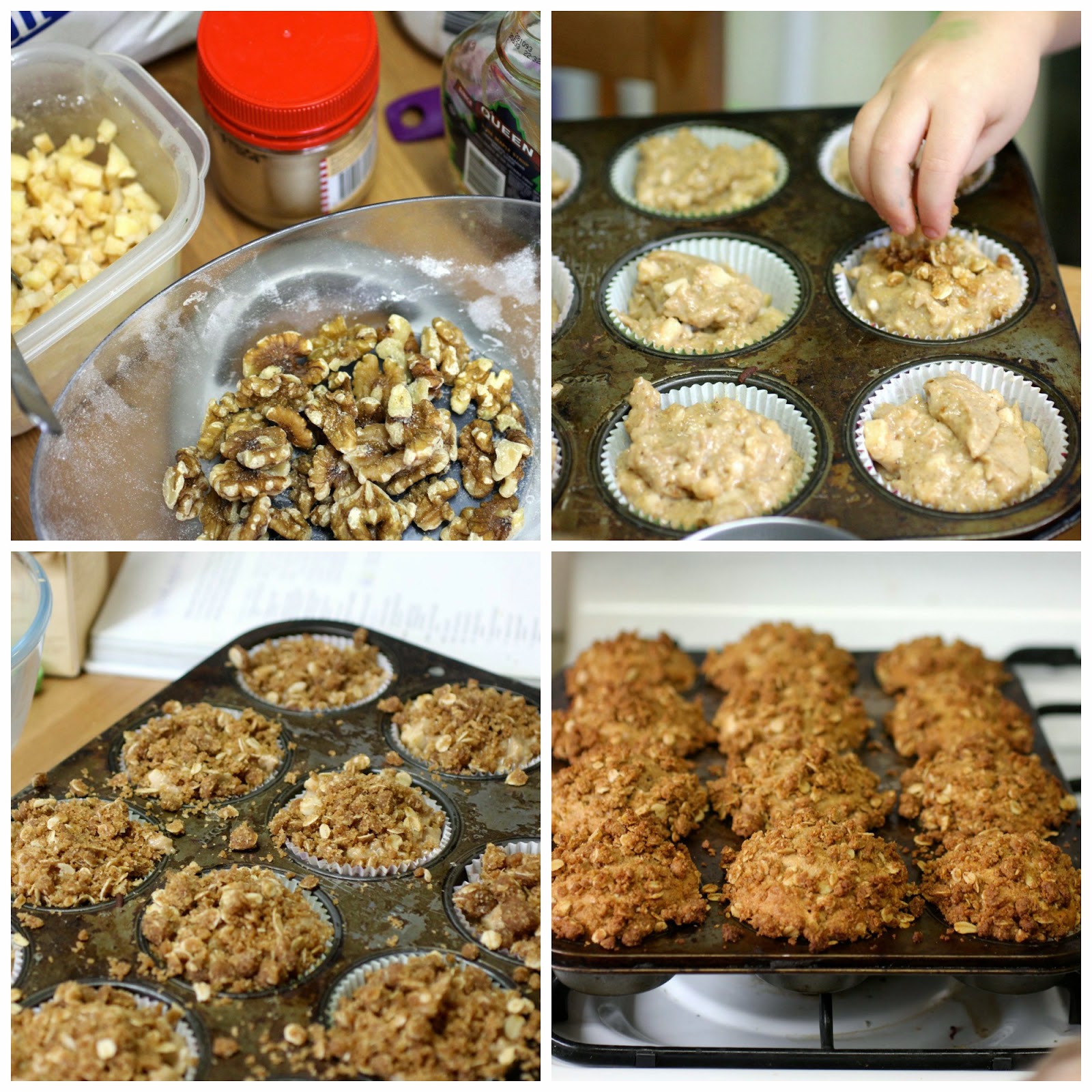 I chopped everything finely for Sylvia.  (She has an aversion to bits!)  When it came to sprinkling the crumble topping, she was eager to help.  It seemed there was too much topping for the muffins.  Yet by the time they rose beautifully, they had just the right amount of crumble.  I was most pleased with the muffins.  Perfect golden crunchy domed tops.  The maple syrup gave lovely flavour but minimal sweetness.  And they were soft and comforting.  (My only reservation is that maybe I shouldn't have reduced the cinnamon quite so much.)  It seemed a shame not to share even though we didn't go to see Yav. 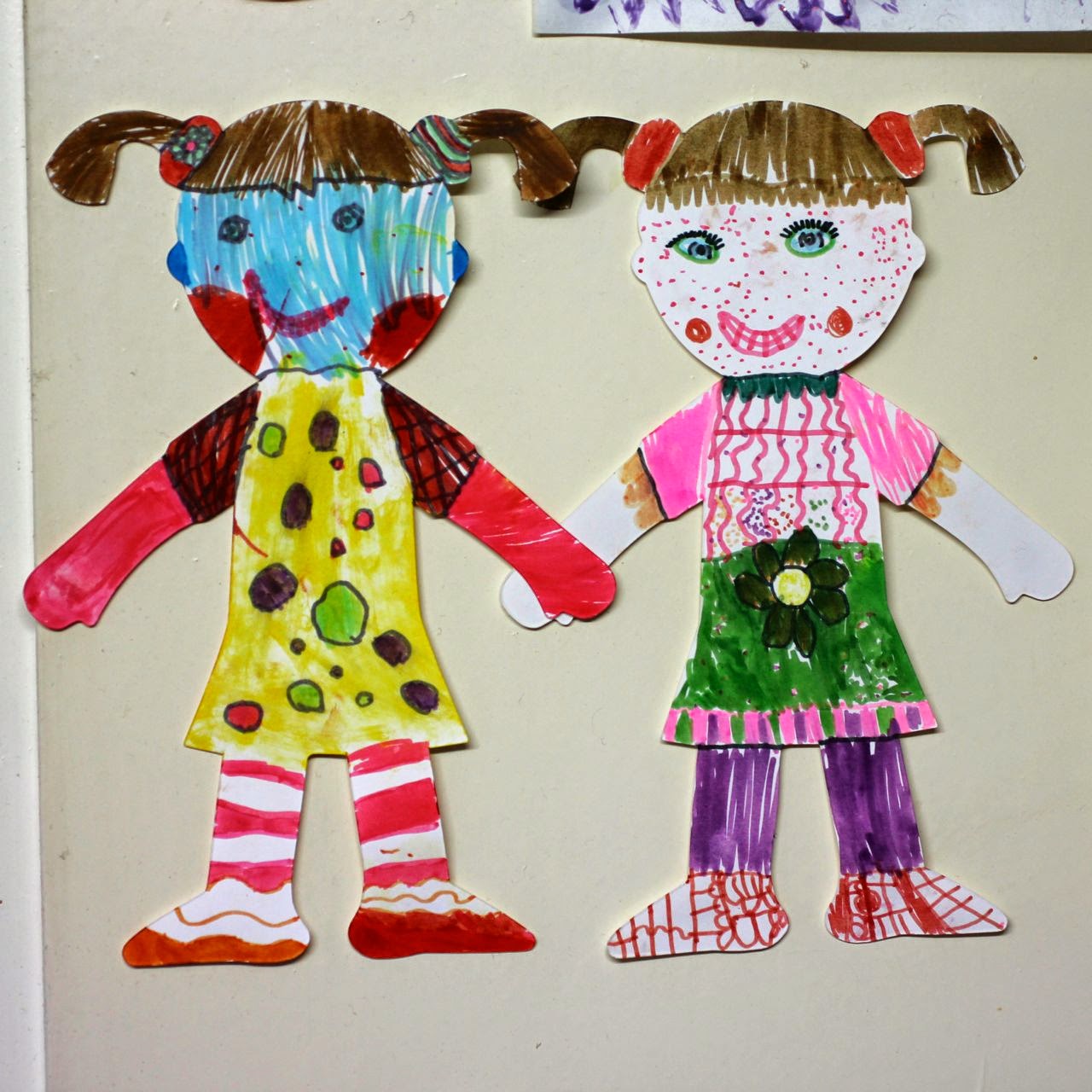 Let me pause here to note that the school holidays started on Monday.  They are Sylvia's first school holidays.  It has been a gloomy grey wet week.  I was very glad that I booked Sylvia into a holiday swimming intensive of lessons every morning this week. It has been a great way for her to burn off some energy, even if it is a chore to dry the towels and bathers every night.  It makes me feel better about not being able to get out to the park or riding on her new bike.  Hopefully we will see the sun next week. 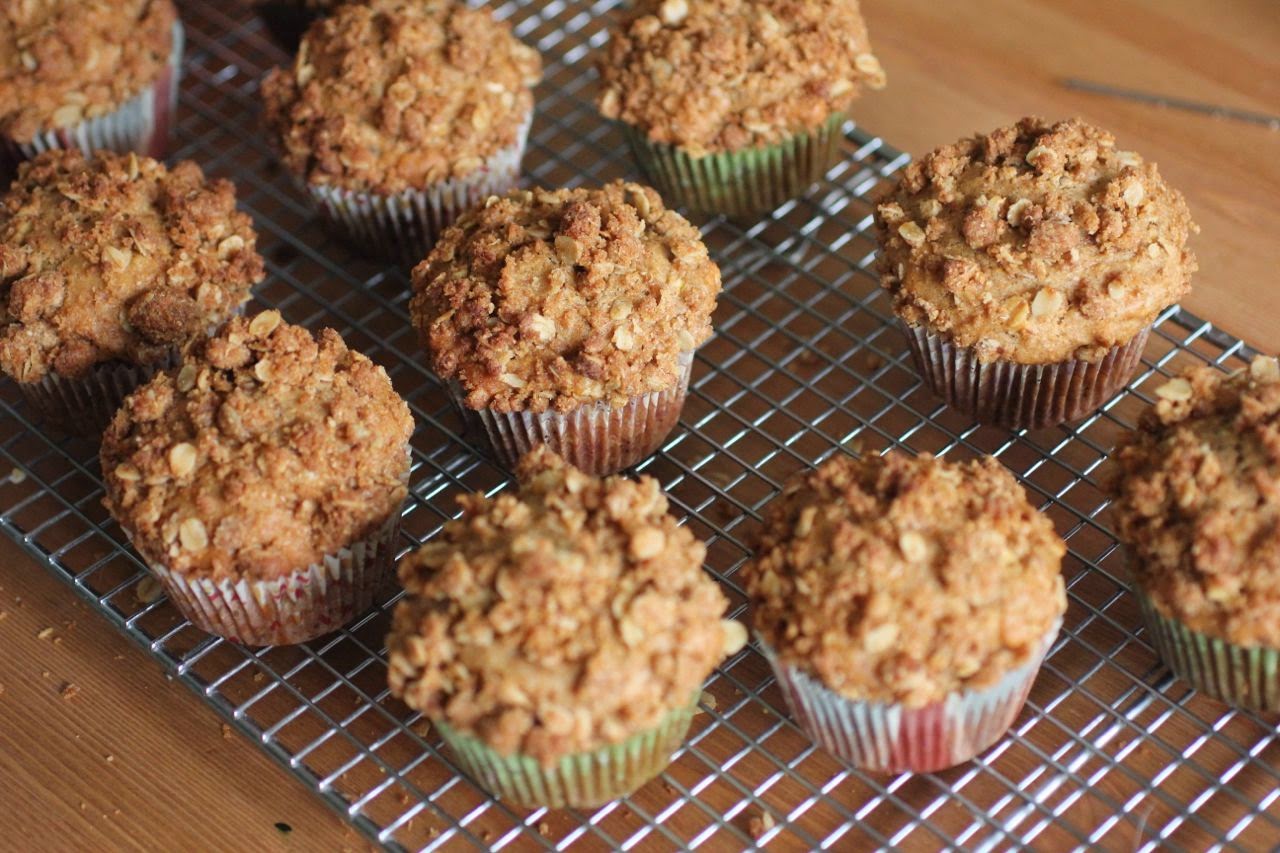 I phoned my friend Kathleen and suggested we meet up for a cuppa and a muffin.  We had originally planned to meet last week but I had been sick.  The fates were kind to us.  I was able to share the muffins with an appreciative friend.  Sylvia had great time playing with Kathleen's daughter.  And we were able to have a good catch up after all.  So it seems that the best laid plans of mice and men might go awry but a batch of fresh muffins will always be good thing.

I am sending this post to Michelle at Utterly Scrummy Food for Families for the Simple and in Season food challenge, run by Ren Behan.  I am also sending the muffins to Healthy Vegan Fridays #13, hosted by Suzanne at Hello Veggy, Anna at Herbivore Triathlete, and Kimmy at Rock My Vegan Socks.

Prepare topping by mixing all the ingredients in a small bowl.  Set aside.

Toss chopped apples with cornflour in a small bowl and set aside.

Whisk together oil, maple syrup and milk in a medium to large mixing bowl.  Add remaining ingredients except walnuts.  Mix until combined.  Fold in apples and walnuts.

Spoon into muffin tin.  Sprinkle with all of the crumble topping mixture.  Bake for 25 to 30 minutes (I did 30 minutes).  Cool on a wire rack.