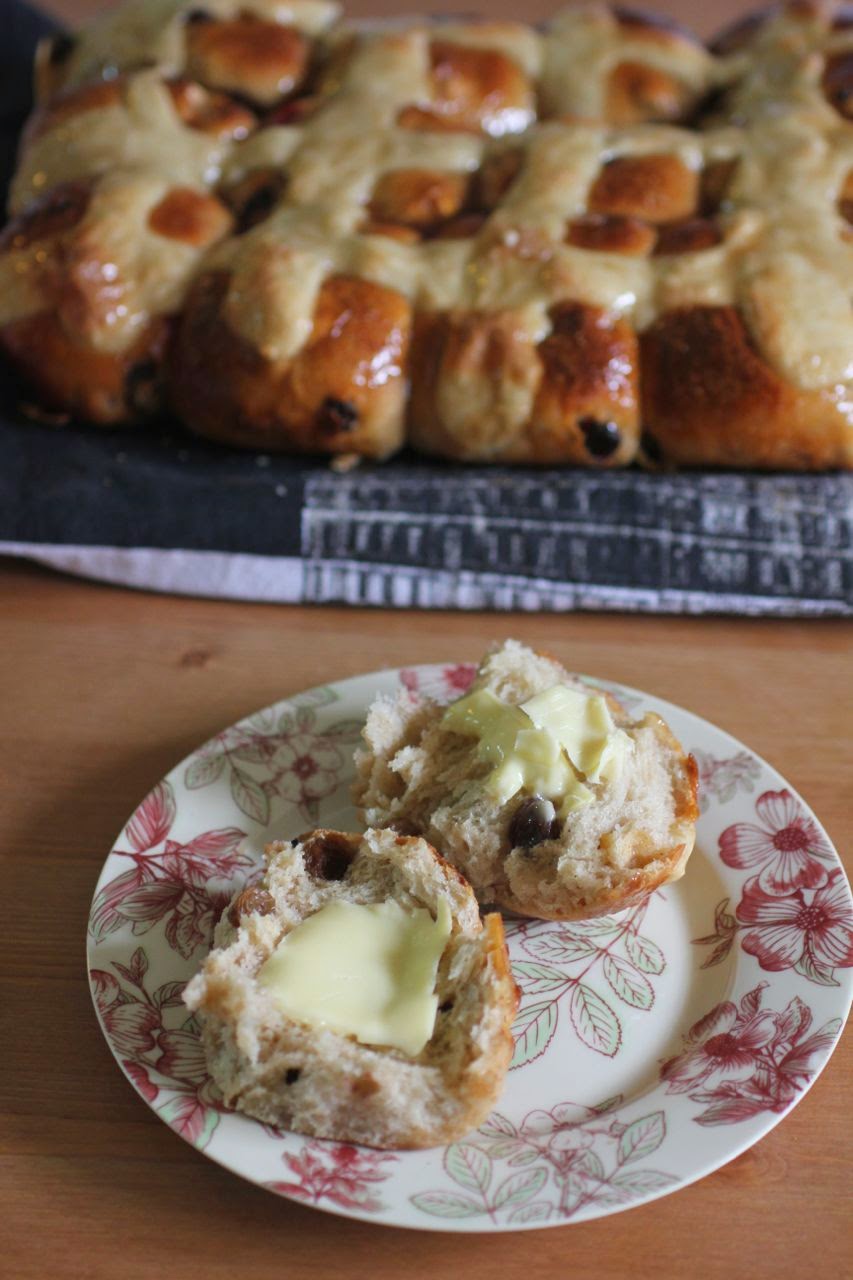 Another Good Friday.  Another batch of hot cross buns (HCBs).  I have been making them every year since I started this blog.  I don't get too excited by Easter eggs but I could live on hot cross buns.  All year round.  Homemade of course.  This year I have been excited to be able to use my sourdough starter.  The HCBs take longer but they taste A-Maz-Ing!

I have made two batches of hot cross buns this year.  I haven't actually followed a sourdough bread recipe since making my starter mid-last year.  I can't get my head around them.  Intuition is so much easier.  So I was wary about finding a sourdough hot cross bun recipe.  I thought I needed a practice run in case it all went terribly wrong. I turned to my sourdough guru, Brydie at City Hippy Farm Girl, and then swapped notes with my mum who is into Dan Lepard right now.  I added my usual HCB crosses and glaze.  By the time I had noted what I had done the first time, I felt I could claim the recipe as my own.

The first batch was started at 9am and out of the oven at about 7pm.  I was very pleased with it.  My mum tasted the HCBs and declared them to be the best I had ever made.  I agree.  They were soft and fluffy, spicy with sweet sticky chewy crosses. 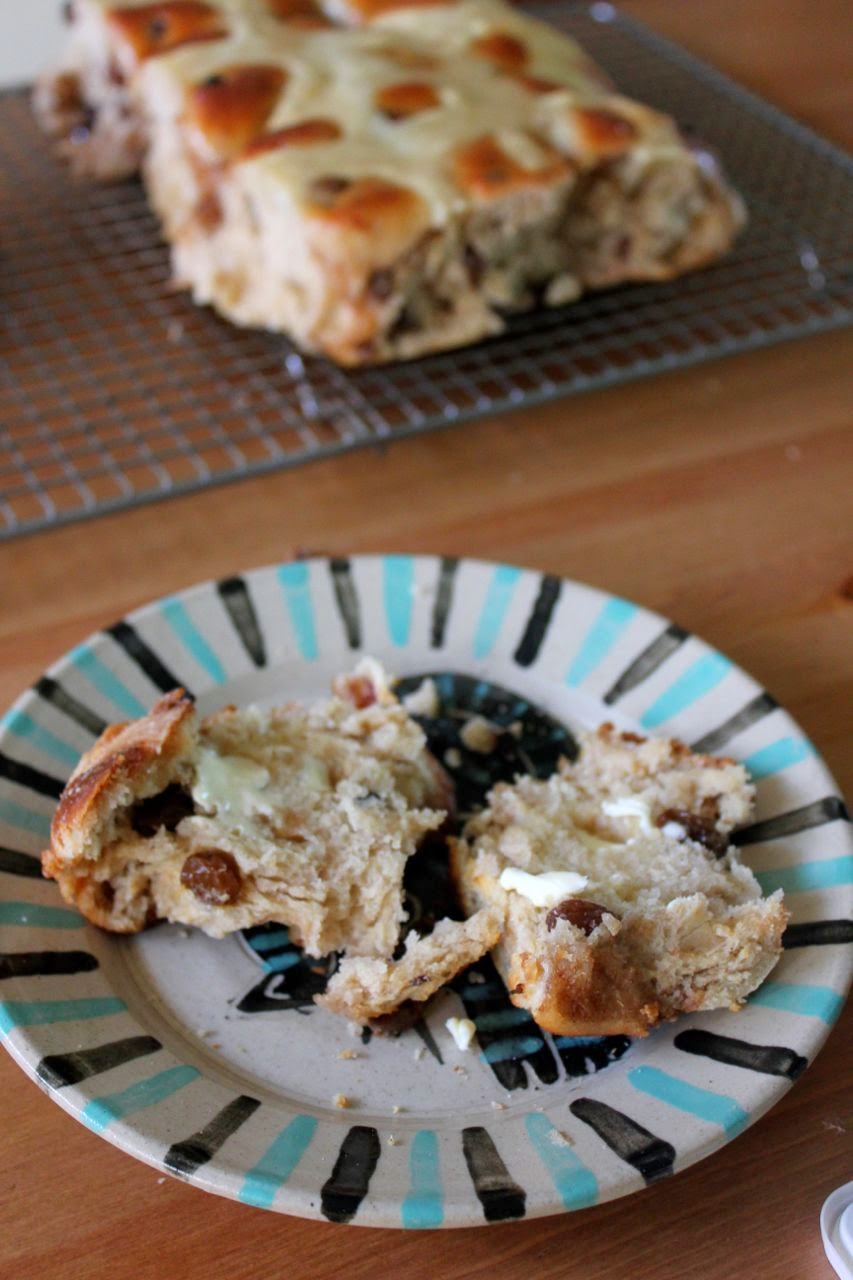 The second batch was made last night in readiness for Good Friday.  I started at 4pm, left them for 4 hours before the fold and stretch, left them in the fridge overnight, and finally had them ready to eat at midday.  The dough was so soft that it seemed almost cake-like rather than that tough dough that I usually bash about.  It also didn't seem to rise as much as usual.  I guess it is weighed down by butter and egg.

I have a feeling they would be ok at room temperature overnight (based on a tester bun and previous sourdough breads) but would need to check to be certain.  I also believe that this recipe could be veganised easily with a chia seed egg and non-dairy milk and margarine.  (This is based on making a vegan version of my favourite recipe.)  I was able to confirm that it is best to line the tin with baking paper to stop them sticking.

There is much that is counter-intuitive in this recipe.  Making crosses without any sugar seems wrong but they are just lovely once covered in sticky glaze.  The glaze seems too much for the buns but if you keep brushing it on, you will use it all. 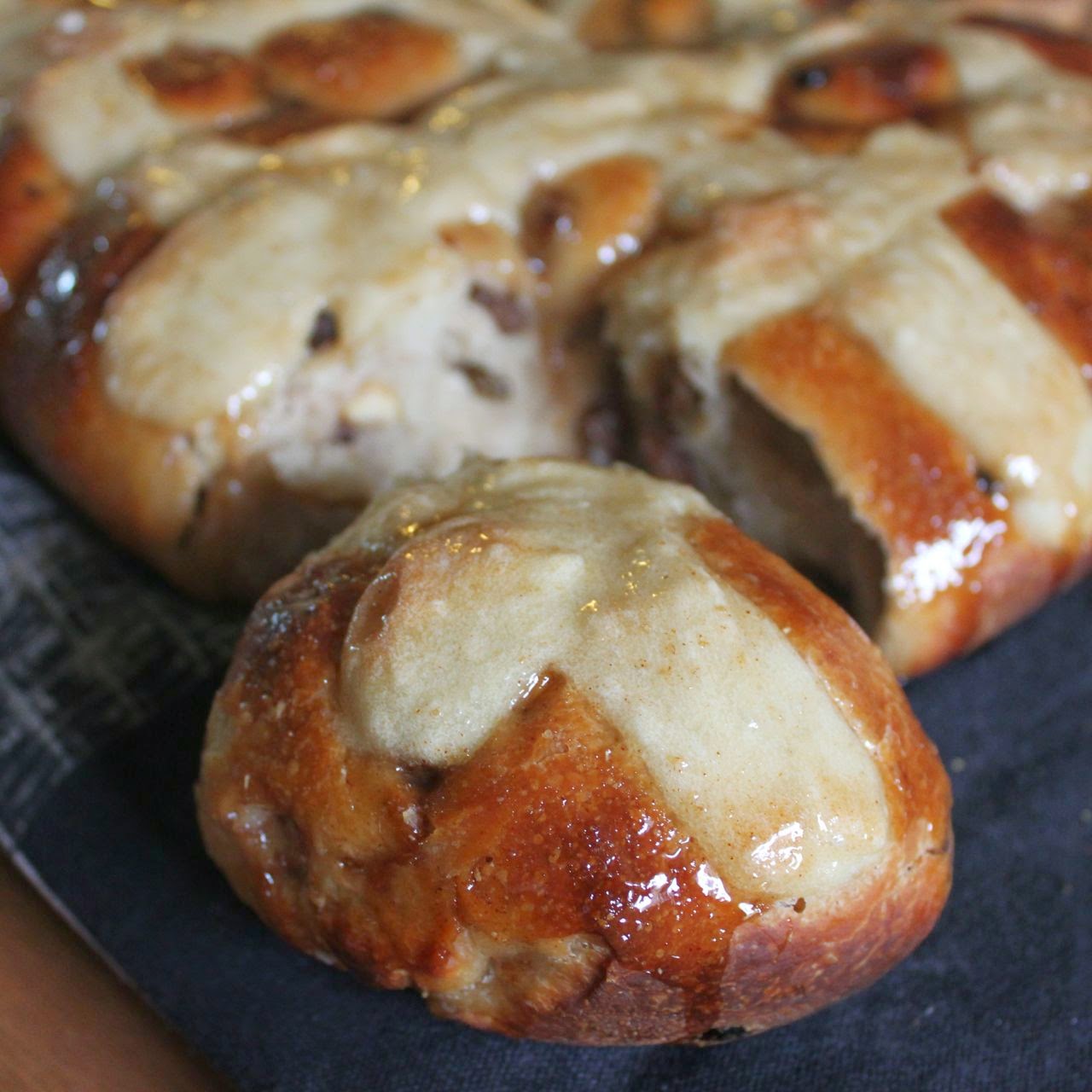 Sourdough baking is so forgiving of a ride to the park or a favourite television show (Janet King).  However this recipe does need a bit of attention at the start.  It is worth it.  The results were every bit as good as the first batch.

Sylvia loves the thick chewy sticky crosses.  She rips off the crosses and leaves the buns.  Which does not make me happy.  I love the crosses too.  At least she is as excited by HCBs as I am and had eaten some of the buns.  Hot cross buns have always been a part of my Good Friday.  It is usually a quiet day at home for us.  There is something solemn about the day that prohibits going out and having fun. 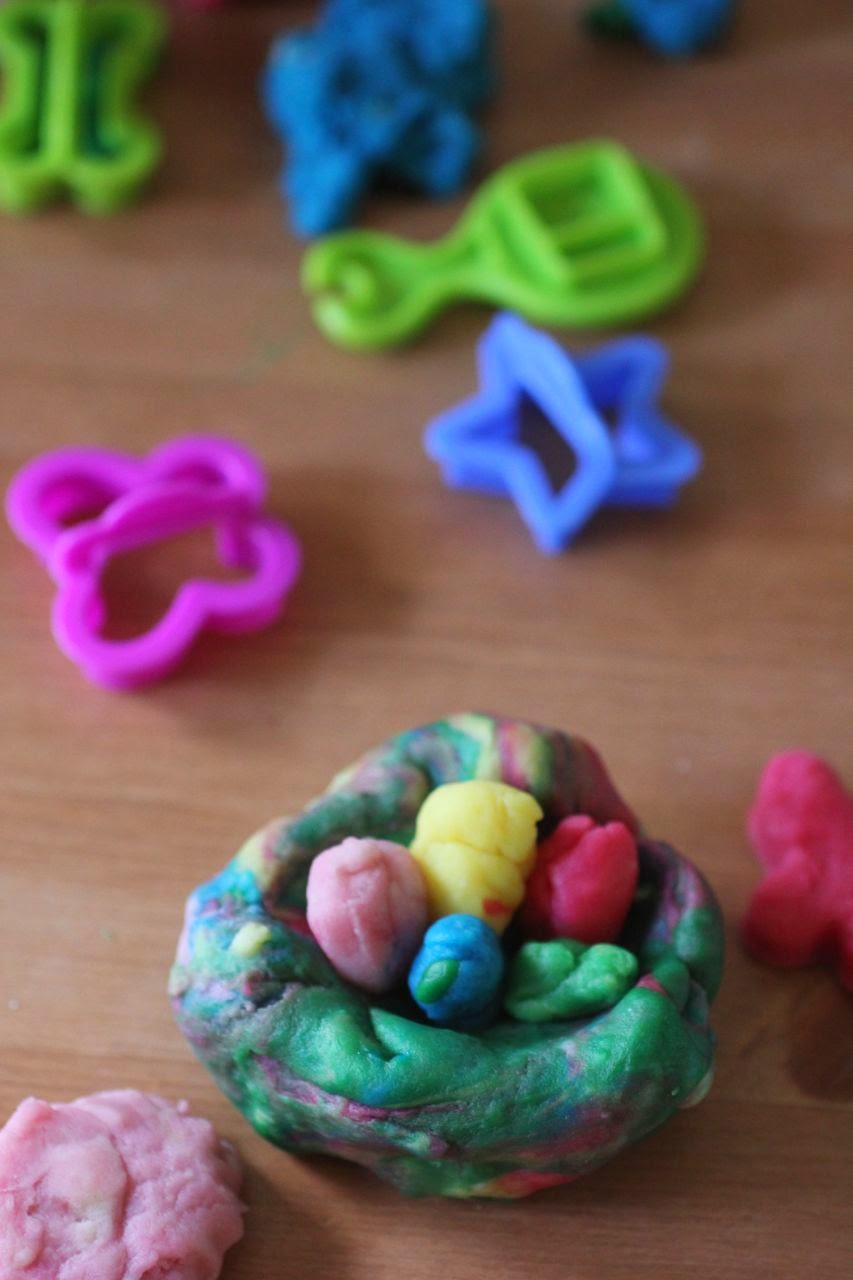 Instead we stayed home and had fun.  In a quiet way.  Once the hot cross buns were made, we made salt dough easter eggs and playdough.  We read Hurrah for the Circus by Enid Blyton.  I made Easter chick crackers.  We even discovered camelia flowers in the garden.  Then Sylvia started to turn over the tub of mint to find worms.  My favourite comment of the day was when she said to me, "You go in and clean up the playdough.  I will look at worms."

In fact, Sylvia has had quite a few firsts lately.  It makes me feel like she is growing up quickly.  I guess school does that to a child.  Here is a list of recent firsts: 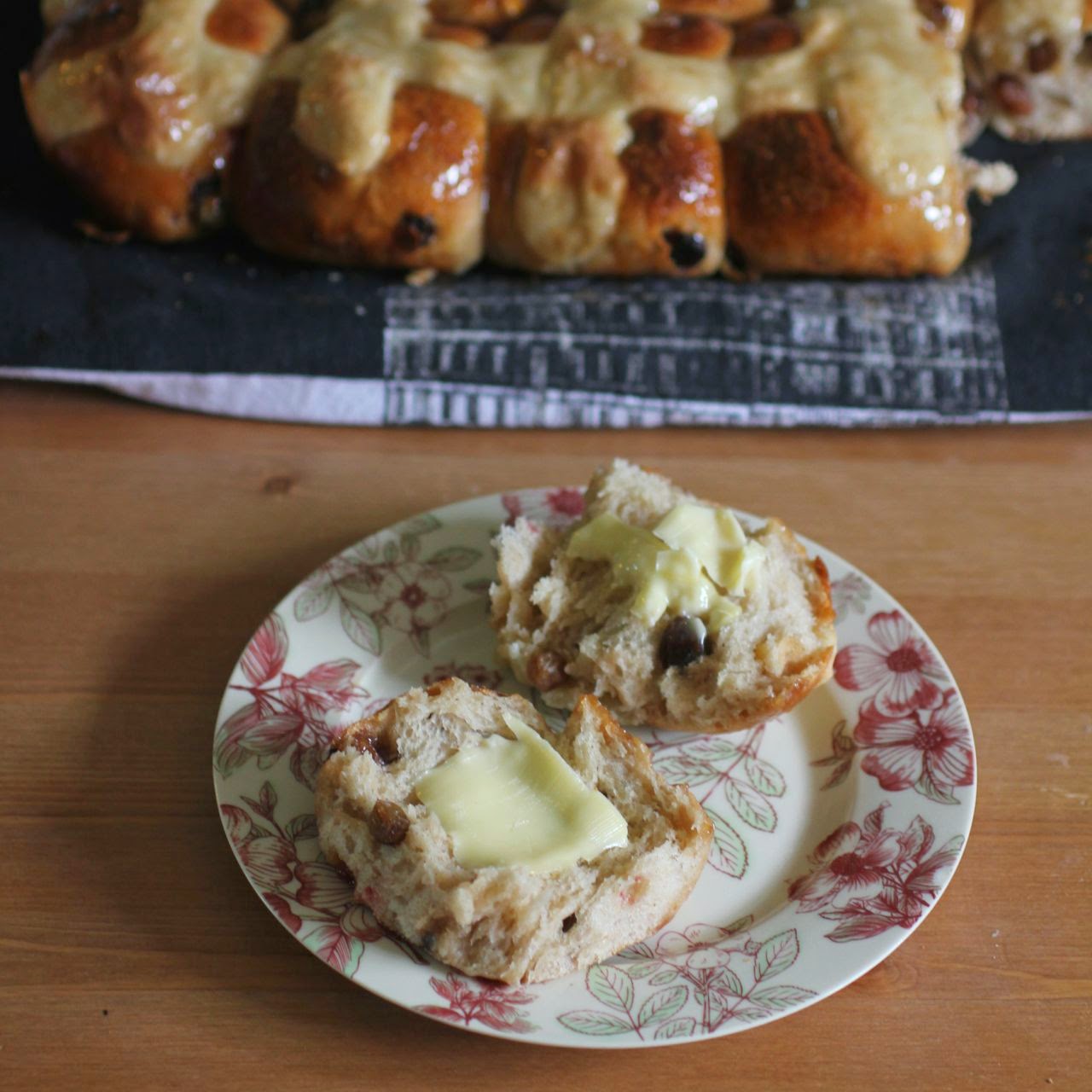 Sylvia also believes that Hot Cross Buns are square.  Perhaps it is because I like to make them snuggled together with a cross that joins them together.  I know my HCBs aren't as round and pretty as some but I am very partial to these rustic buns.

I am sending these hot cross buns to Susan for YeastSpotting, the regular round up of all things yeasty online.

Mix all the buns ingredients except the salt.  Cover and rest for 30 minutes.  Mix in the salt - the dough will be quite stiff.  Cover and stand another 30 minutes to 2 hours. 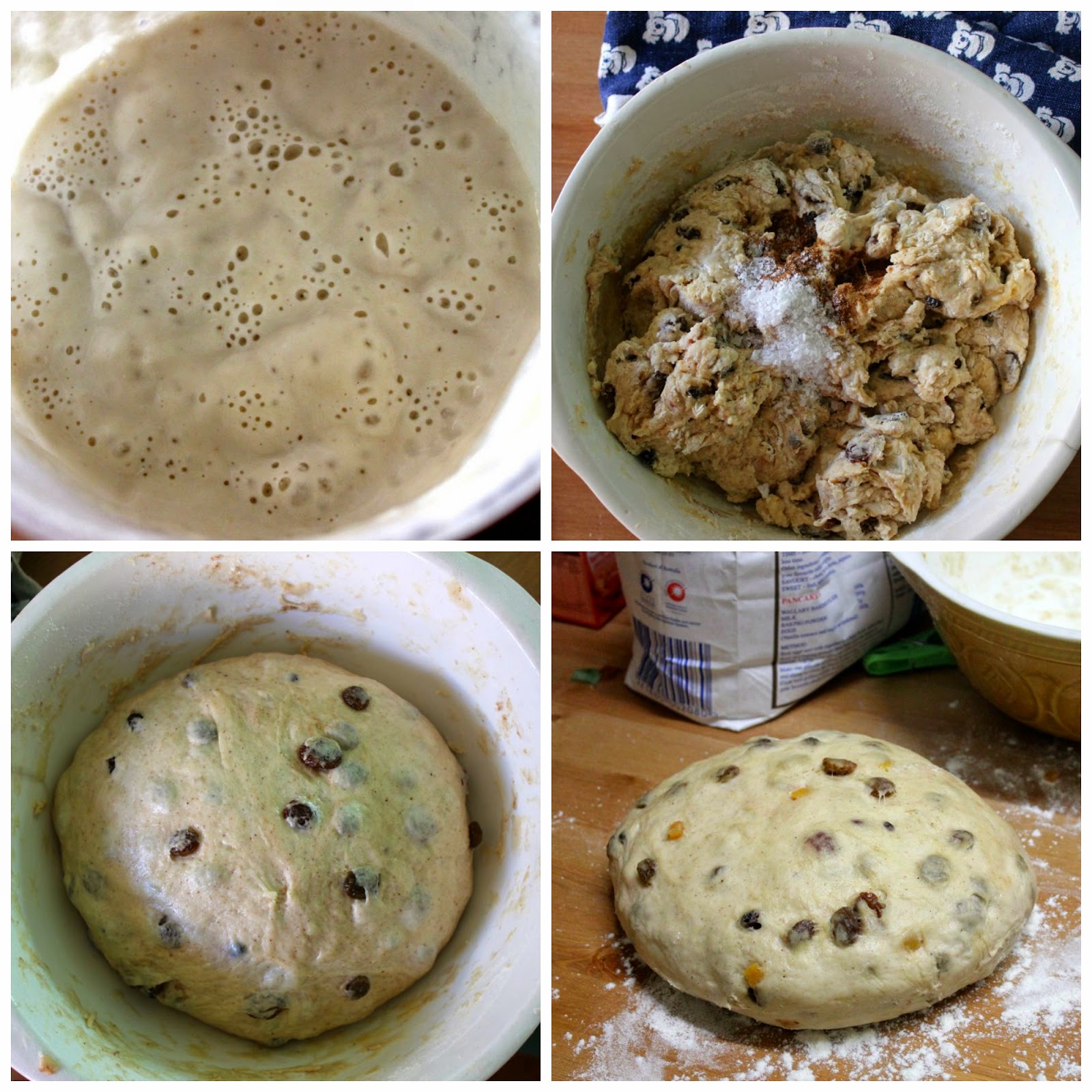 Stretch and fold (or knead for 15 seconds).  Cover and leave for 1 to 2 hours.  Tip the dough onto a lightly floured (or oiled) board and cut into 16 to 20 balls with a sharp knife.  (When I tried 15 buns they were a little big.)  Roll each piece into balls and place in a lined 13 x 9 inch baking tray. 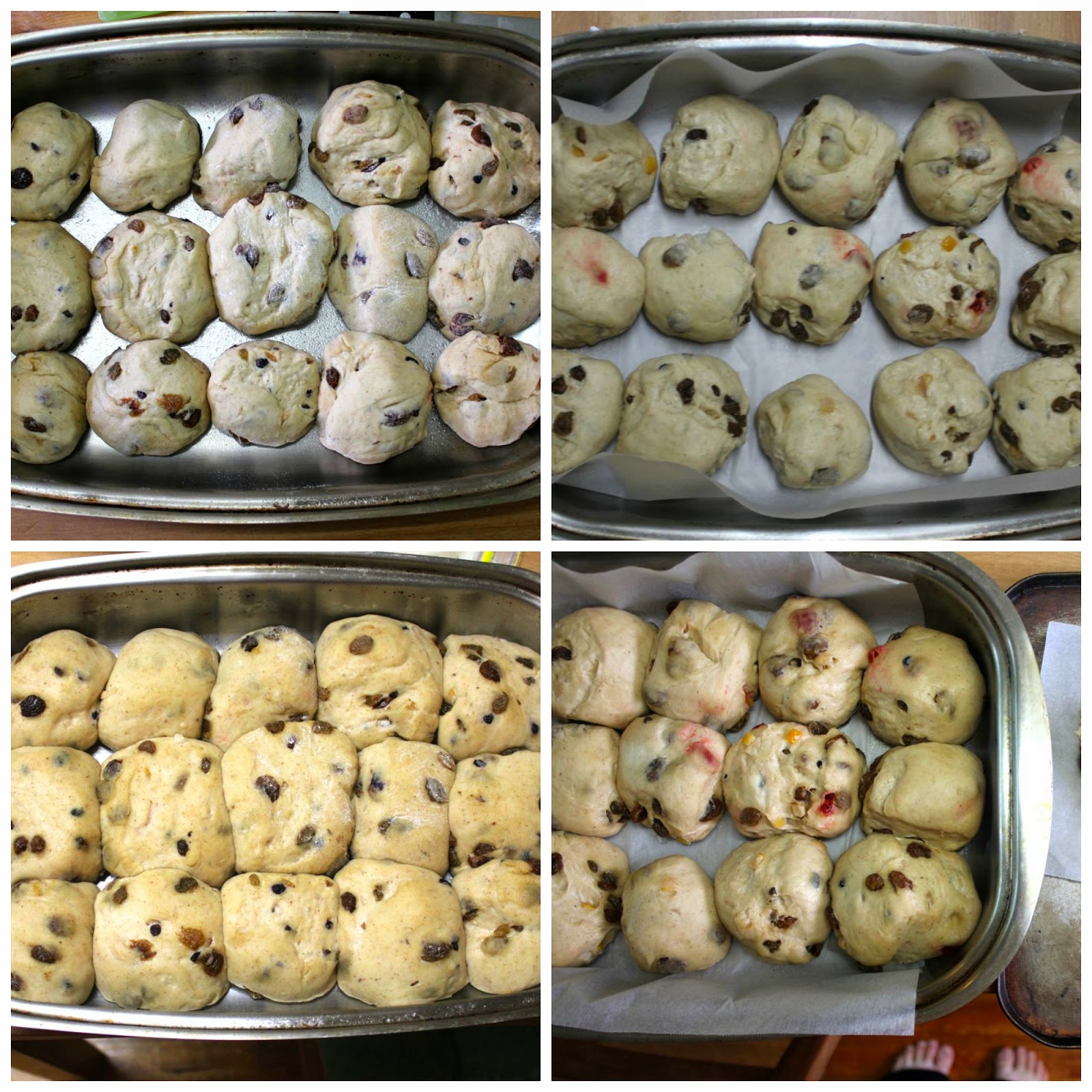 Cover and set aside to rise for 1 to 3 hours until risen.  At this point you can leave them in the fridge overnight.  I think you could also leave them at room temperature but need more experimenting on this.  If you leave them overnight you will need an hour or two for them to come to room temperature the next morning. 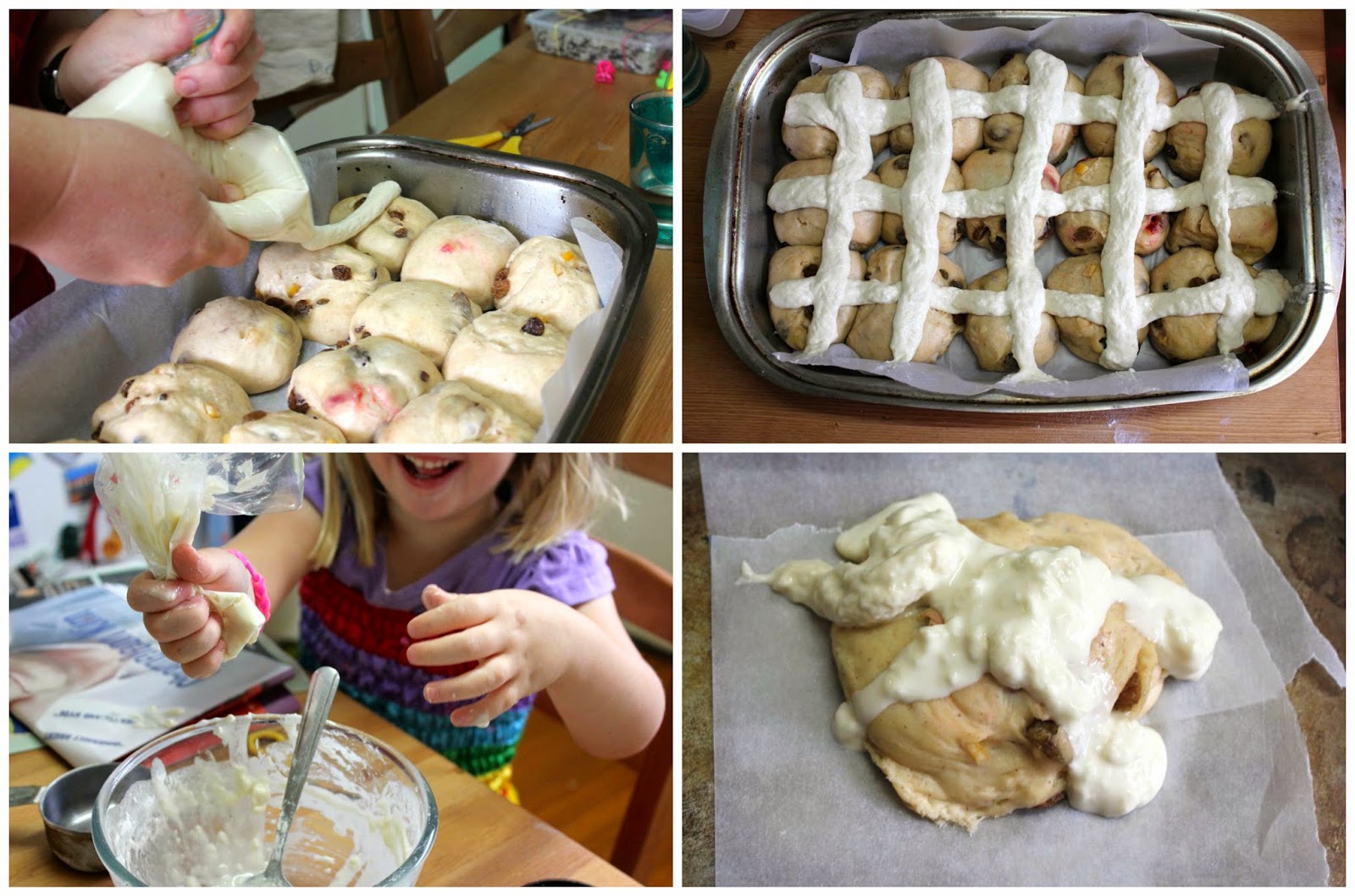 About half an hour before you are ready to bake the buns, preheat the oven to 220 C.  When the buns are ready to go into the oven make the crosses by mixing flour and water into a thick paste.  I used about 1 cup of flour and 3/4 cup of water but it changes every time.  I like a thick cross so if you want neat thin ones you may need less flour and water than me.

To pipe the crosses I spoon the mixture into a ziplock bag, seal it and snip a tiny corner.  Then I pipe lengthways and then crossways over all the buns.

Bake bun for 20-40 minutes (Brydie at City Hippy Farm Girl said 20-25 minutes.  I did 40 for my first batch but did just shy of this for the second batch and it could have been in a little less.  My oven is slower than most.)  They are ready when golden brown and sound hollow when tapped.  They will look quite dull until glazed. 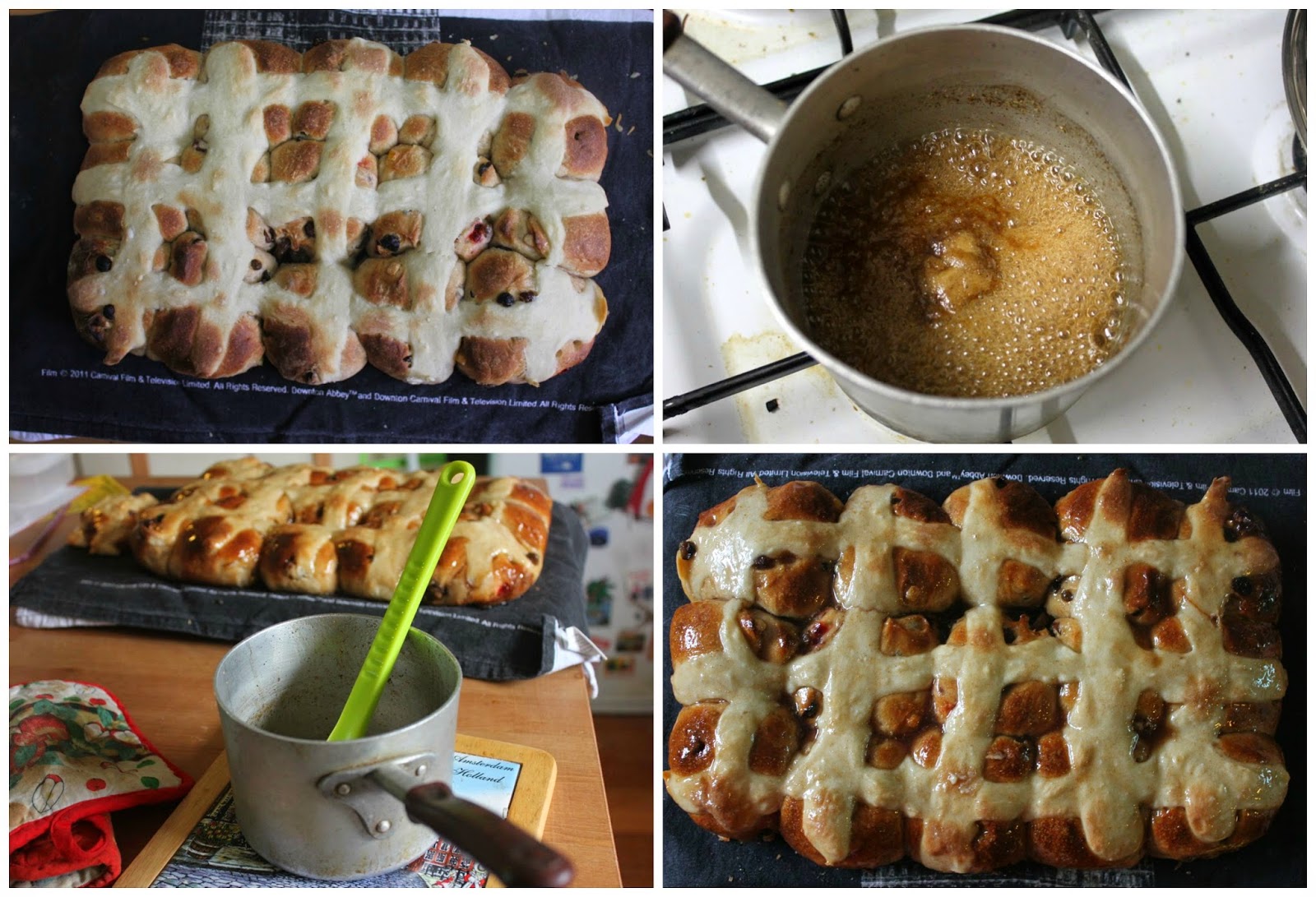 About 5 minutes before the buns are ready to come out of the oven, mix all the glaze ingredients in a small saucepan and bring to the boil.  Simmer for 5 minutes without stirring.  When the buns are out of the oven, turn onto a wire rack with the crosses facing upwards.  Place an old teatowel either on the rack before placing the buns or on the surface under the rack.  It will get messy with the glaze.

Brush glaze over the buns.  It seems like too much but just keep brushing over and over until all the glaze is used up.  (Do not just tip over the buns - it will just pool under the buns.)  Wait at least an hour before eating - if you can wait that long.  Reheat for 10 - 15 minutes at 180 C (I find I do 15 minutes but my oven is not over powerful).

On the Stereo:
Love: The Beatles
Posted by Johanna GGG at 22:36