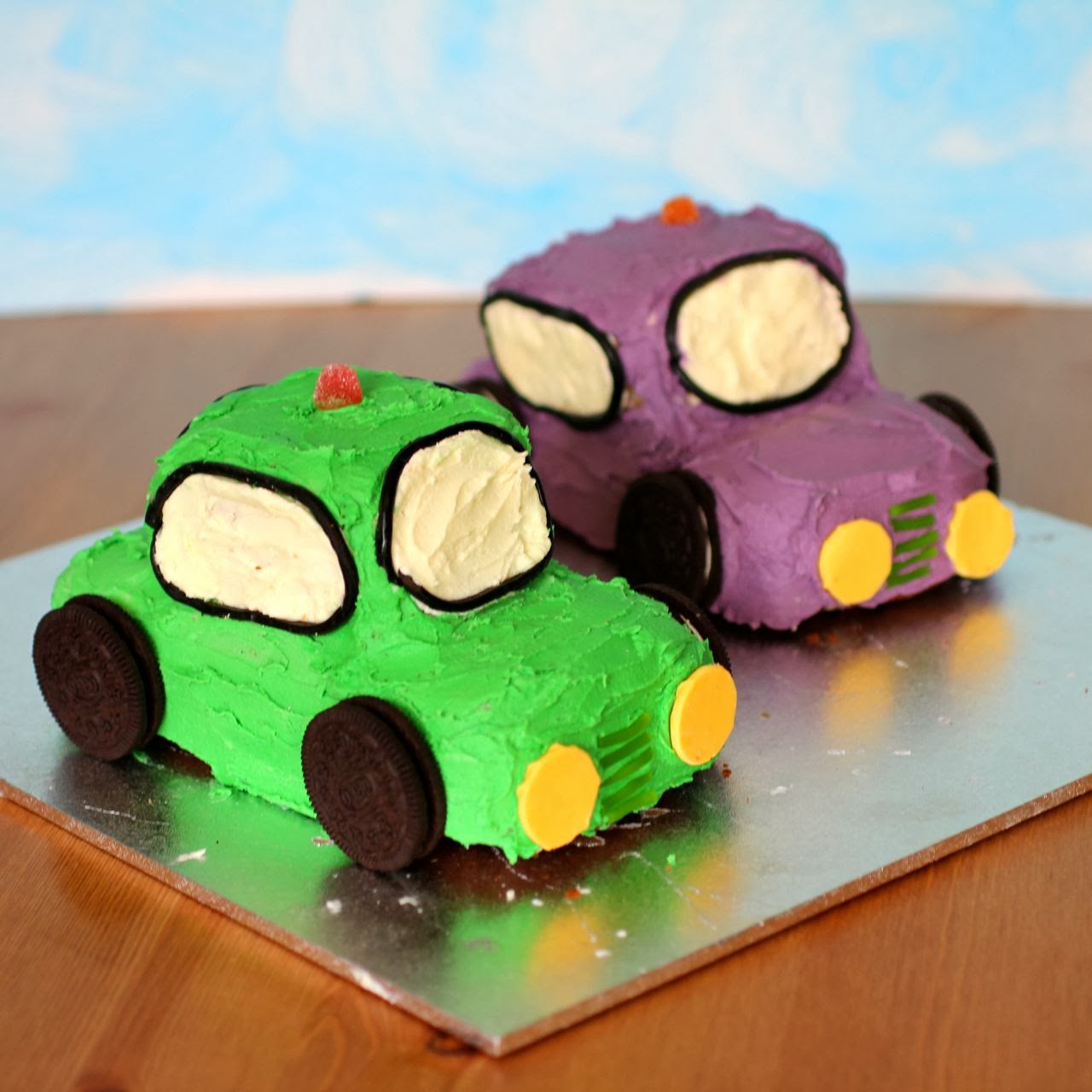 While my Irish nephew Dash was visiting over Christmas and New Year, he celebrated his birthday with his Australian family.  I offered to make a cake and asked what he would like.  He asked for Ricky Gervais' Flanimals.  I didn't rise to the challenge.  Instead I gave him some suggestions from my bookmarks and he asked for the robot car cakes.  (Don't ask about the robots!) 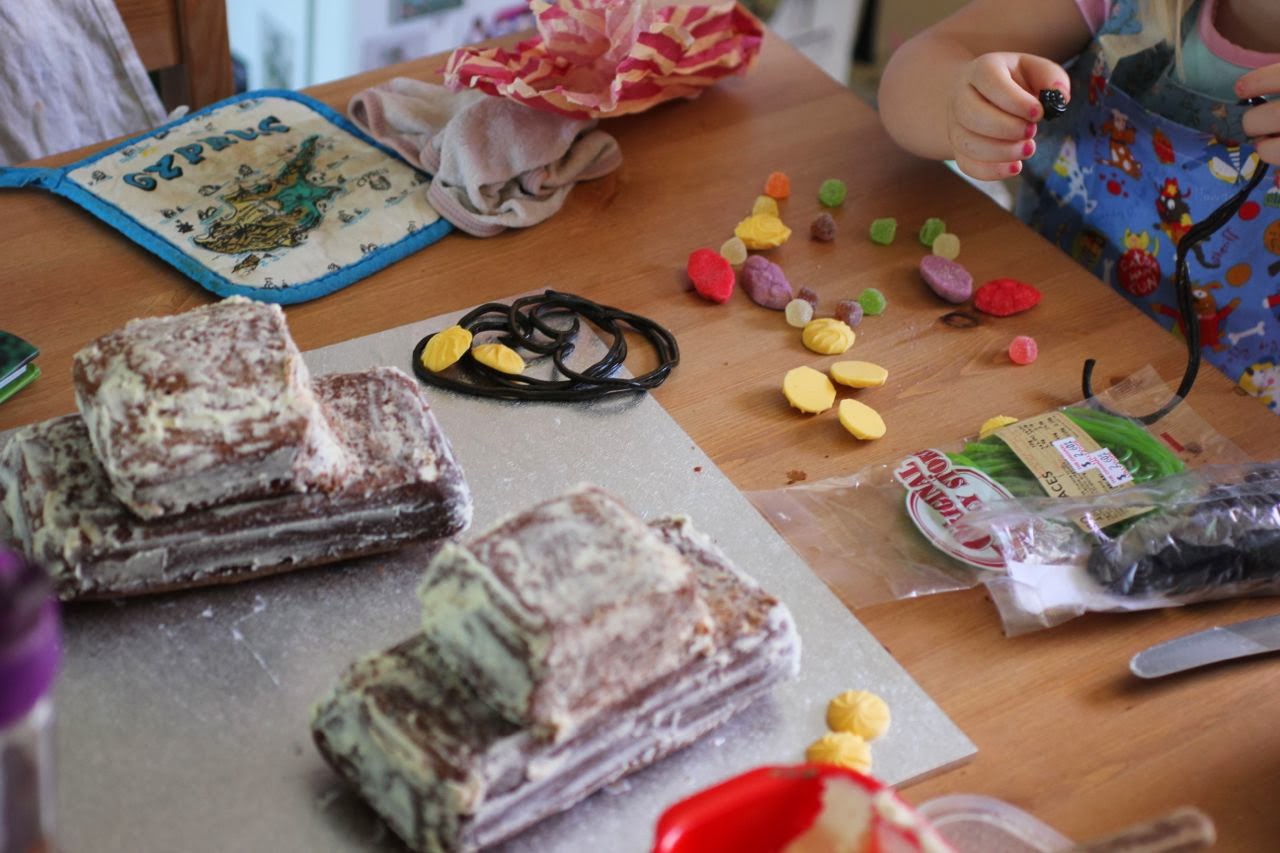 On the evening before his birthday I made three loaves of gluten free chocolate mudcake.  Then in the morning before going to Geelong to celebrate his birthday, Sylvia and I decorated the cakes.  It was fairly easy to make, though spreading some of the icing was fiddly.  And the lolly shop was out of liquorice shoelaces so we could only find it in a coil which meant it had a mind of its own. 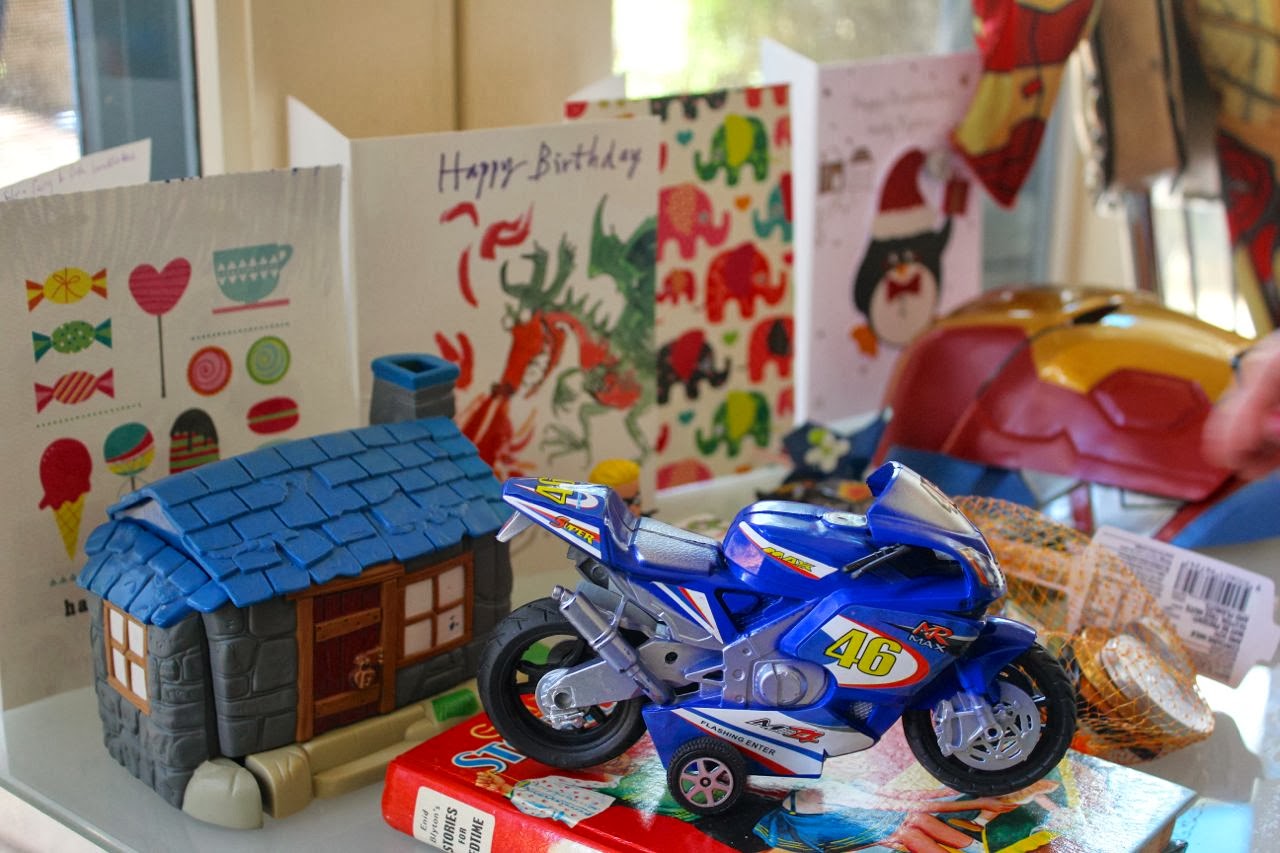 We managed to get to Geelong by 2pm with the cakes, a present and our sanity intact.  Hurrah!  Unfortunately I bought presents that would threaten anyone's sanity.  Perhaps it was just the thought that they would be taken back to Ireland far away from me that made me so irresponsible as to buy a water squirter and a whistle.  Dash was gorgeous in his excitment over presents. 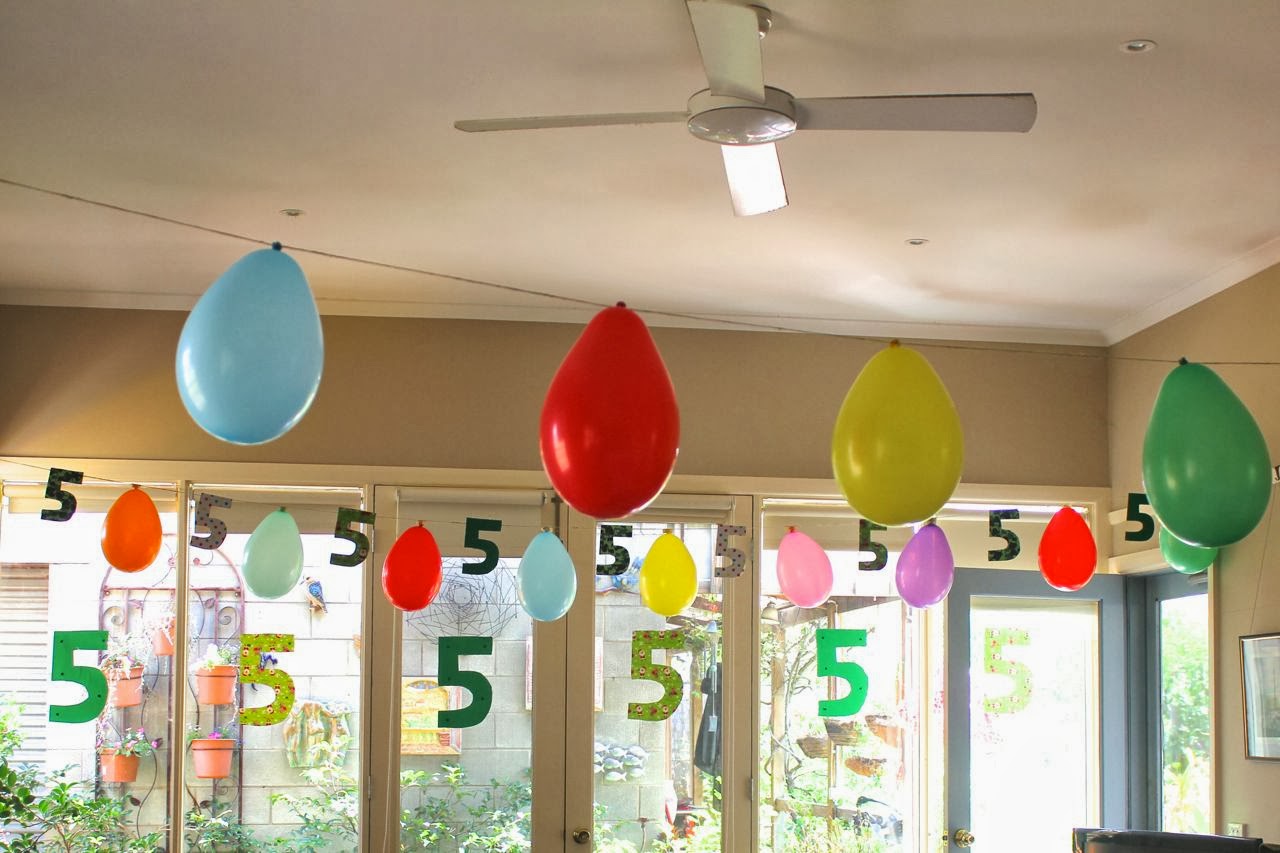 Fergal had done an amazing job of decorating the house for Dash's birthday.  Love the wrapping paper fives!  I wish I had his pizazz with decoration.  He also turned a box of small crisp packets into a pinata!  Genius! 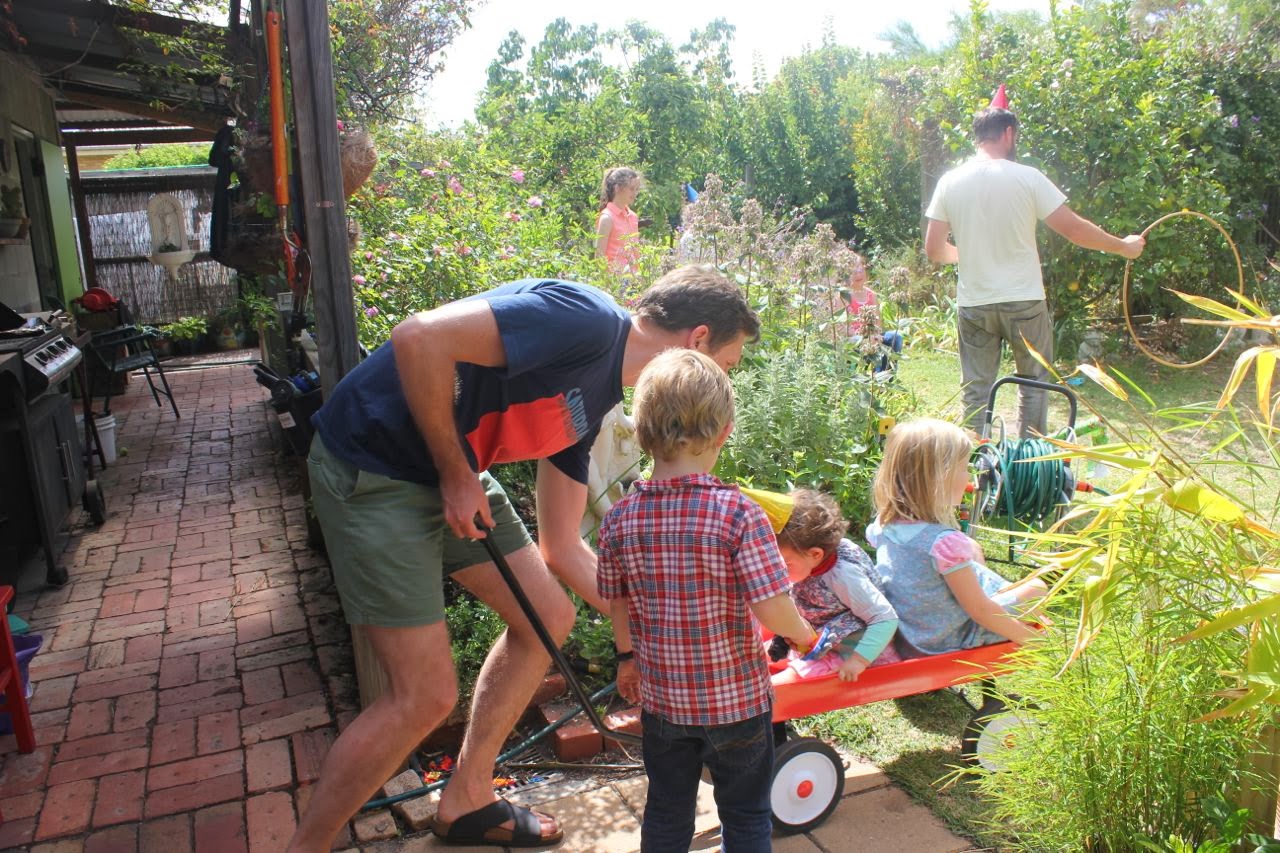 Once the pinata rained crisps on us, Fergal and Chris organised some party games.  Pass the parcel.  (Sylvia is still enjoyed her Pez lollie dispenser she won!)  Musical chairs.  (Am sure Ella will not play this again while holding a baby!)  Musical statues!  (Dash has some very groovy moves!)  Then there was playtime in the backyard with a little trolley, a hoop and the dogs! 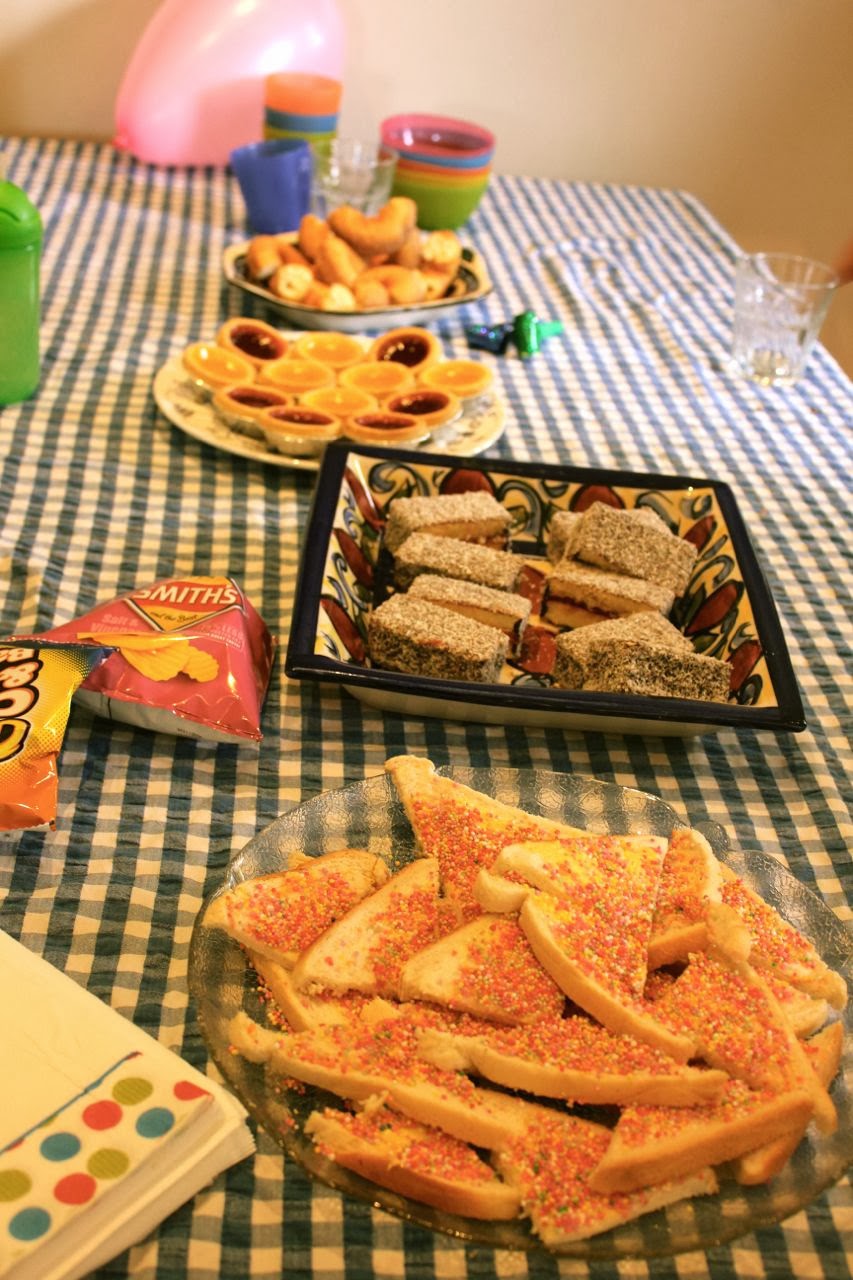 To start we had dips, hot dogs, pastitzi and vegetarian sausages.  Then it was time for the sweet food.  Dash was indulged with Aussie party food that gave my mum a break from the kitchen!  Fairy bread, lamingtons, doughnuts and jam tarts.  (I couldn't resist giving the photo an antique effect because this my family's nostalgia food.) 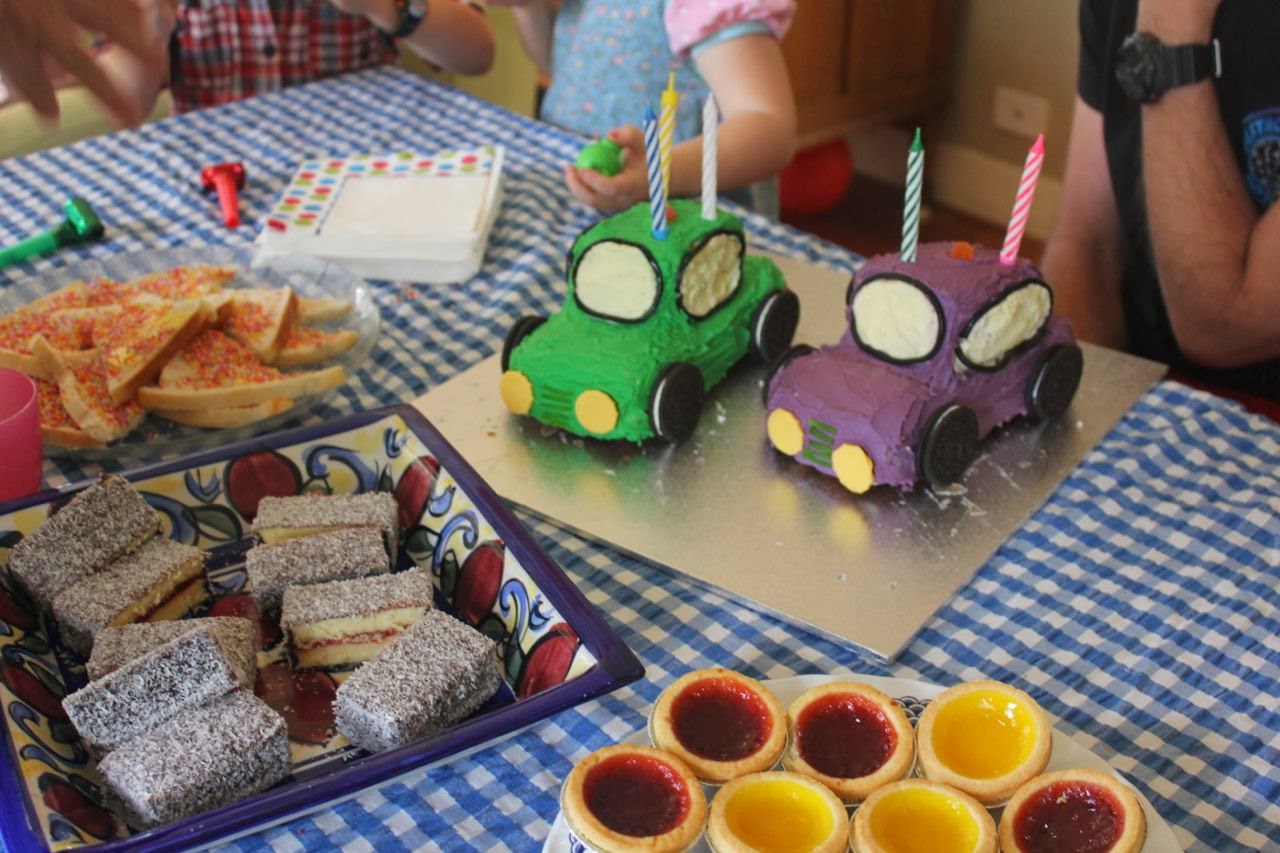 And at the centre of the sweet food was the cakes.  Dash loved them.  Everyone loved the cakes!  Fergal was in charge of the music and found an appropriate song.  Grace Jones "Pull up to the bumper".

Unfortunately after making an effort to make a gluten free cake I realised that only the back of the cars were gluten free thanks to the liquorice and oreos.  The was enough.  In fact there was so much cake leftover that half of it went in the freezer and was finished off at Ocean Grove. 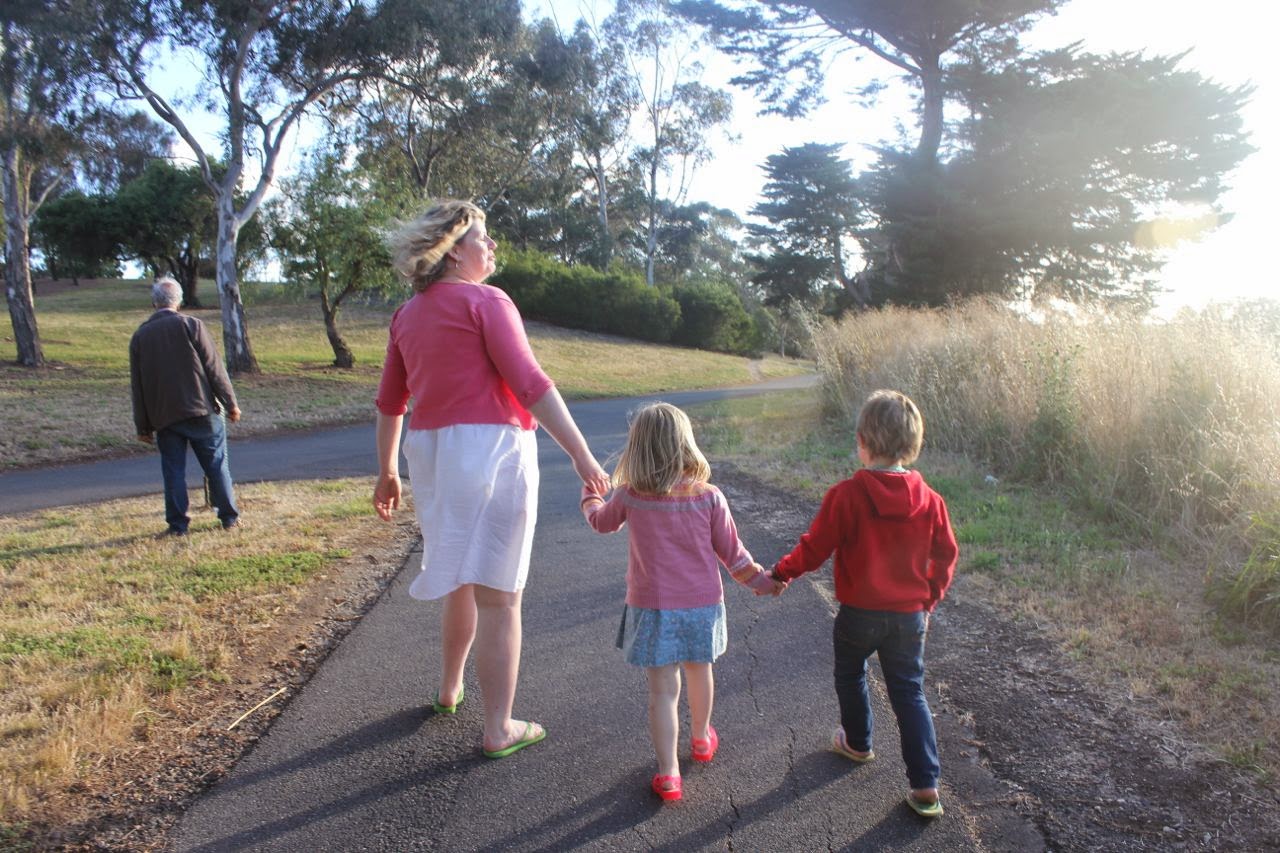 That evening Sylvia and I stayed for a sleepover with Dash.  We went for a walk down by the river and a play at the fun park. 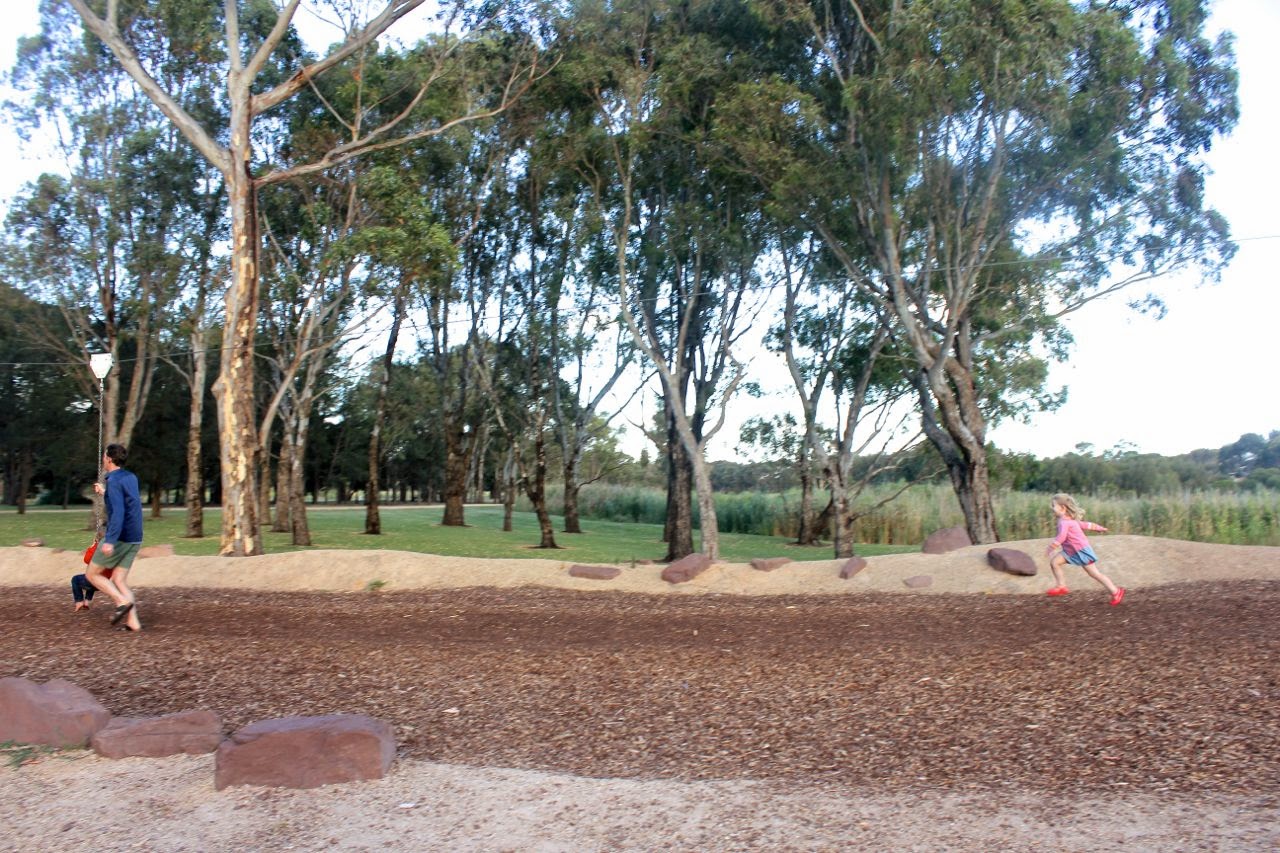 I particularly love this photo of Sylvia running after Fergal and Dash on the flying fox.  Nearby my parents talked to a little girl about her dog.  She said her dog was not very old and Dash replied with the sense of ridiculous that I love in children: "but is it older than a cow?"  Huh? 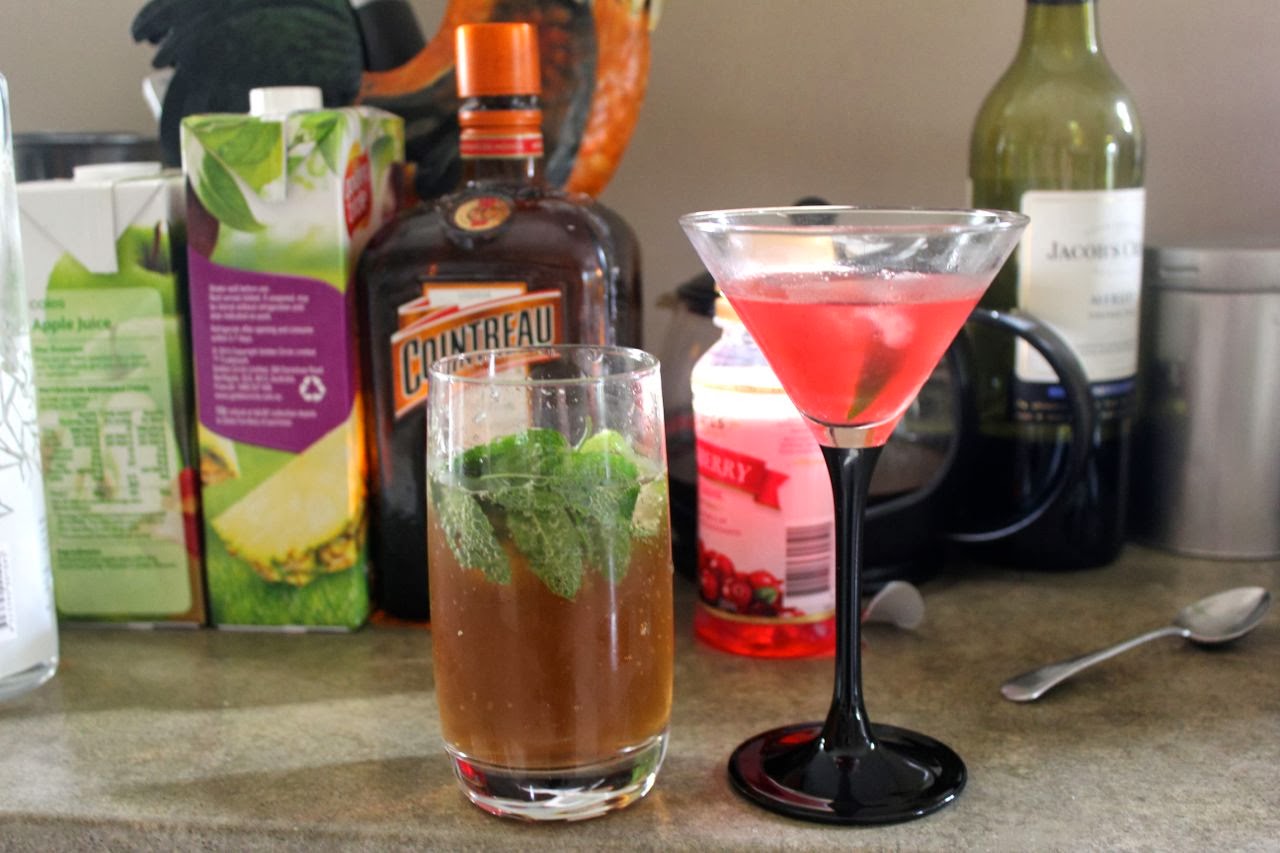 Then we headed back to my parents' house to light sparklers and let Sylvia and Dash sleep top to toe for a few peaceful minutes.  Then, Children separated so they could sleep and party over, we relaxed with some cocktails whipped up by Fergal.  Here is my mojito mocktail and my dad's cosmopolitan.  Now that is a great way to finish a fun birthday. 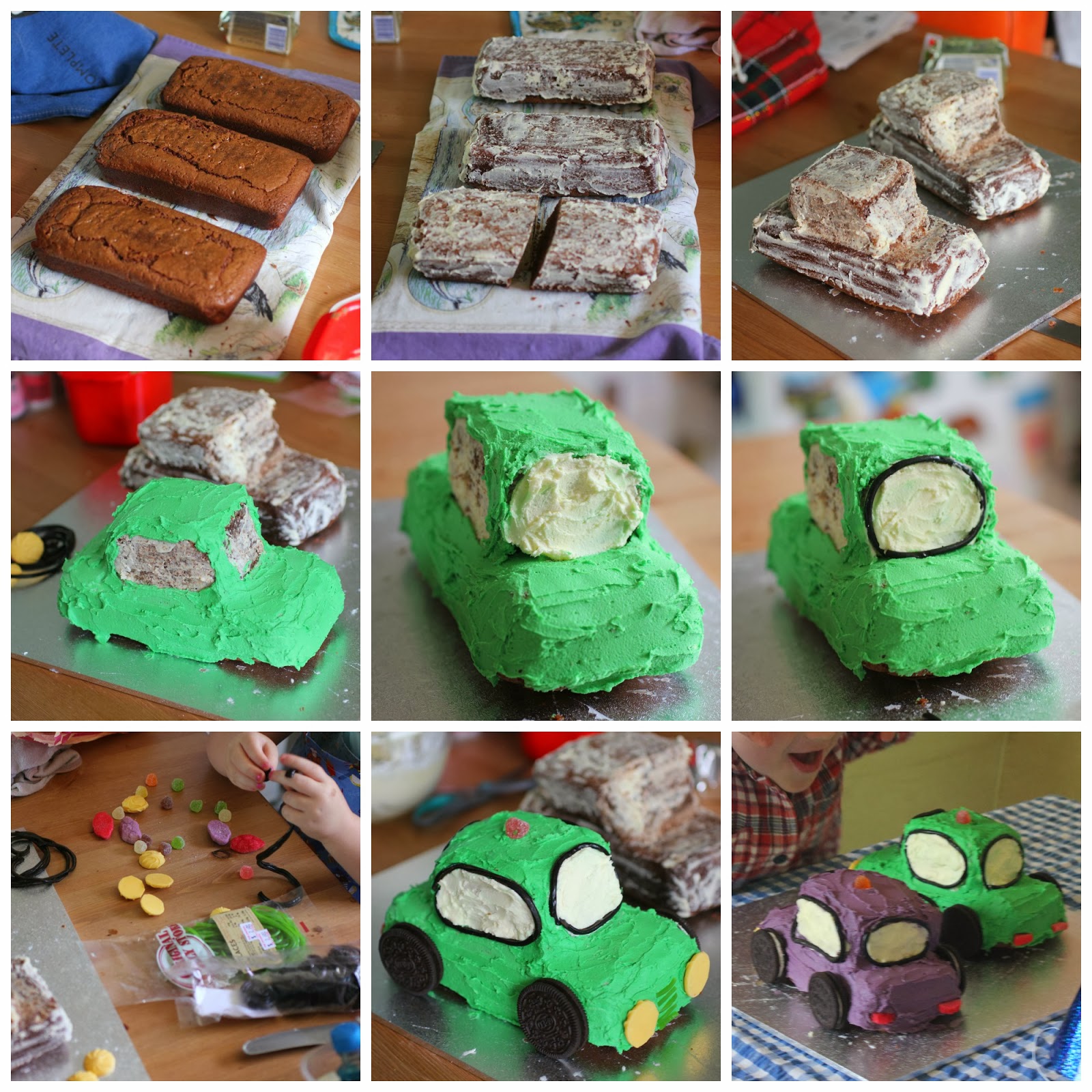 Bake the cake in 3 small loaf tins.  I used this mudcake recipe but added a bit more wattleseed and cocoa because it doesn't have the whiskey in it (being kid friendly).  I used Bob Red Mills All Purpose Gluten Free Flour instead of the wheat flour and it worked beautifully (with 1 tsp extra baking powder to account for the plain flour replacing self raising).  My tins were 20.5 x 10.3 cm.  I bought them specially for the cake and while I may not need that many again, it was very handy to have three for the cakes.  Craftulate used disposable foil tins which is another possibility.  If possible leave cakes overnight before any decoration.

This is pretty easy.  Two of the cakes will be the bodies of the cars.  Cut the third cake in half on an angle and turn one over.  Place each on the middle of one of the full cakes.  I started icing before placing cakes together but it meant I iced one of the tops upside down so would shape first.  I used a knife to shave off some of the top of the green car but didn't do this with the purple car.  These cars aren't meant to be perfect so shaping with a knife is unnecessary unless it looks really lopsided.  (The problem is that once you start shaping this way you can whittle away quite a lot of the cake in search of perfection!)

I don't usually do a crumb coat but it helped here.  (A crumb coat is where you ice very thinly over the cake to seal in the crumbs and make the second coat of icing easier.)  I used some leftover buttercream and left it to dry while I prepared fresh buttercream.  I think I had a bit over a cup each of the green and purple buttercream, plus some extra white for the windows.  The buttercream frosting I used is similar to this.  It took a bit of patience to ice the door frames and then fill in the windows, but the liquorice helped smooth over small imperfections.

This is the fun bit.  Except if your liquorice has been coiled really tightly and doesn't want to stay where you put it on the cake.  But playing with lollies is always fun.  Use black liquorice laces to line the windows.  Any round yellow lollies can be the headlines - we used caramel buttons.  We used red lollies for the rear brake lights.  Jubes were the flashing light on top.  I used some green liquorice laces to make the fender between the headlights.  (Is it a fender - I don't know cars at all!)  I have also seen some cars with racing strips along the bonnet that looked cool.  Finally you will need almost a whole packet of oreos (or other round chocolate biscuits) for the wheels.

I am sending these cakes to Jac of Tinned Tomatoes for Bookmarked Recipes.

On the Stereo:
Never Loved Elvis: Wonderstuff
Posted by Johanna GGG at 09:03