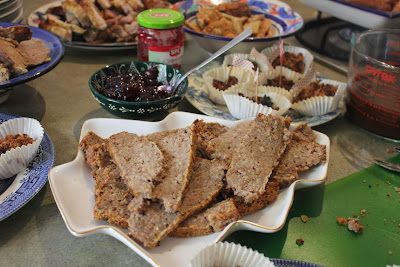 It is some time since I had three consecutive days of family Christmas festivities.  It is exhausting.  Yet, despite being tired today, I am grateful to have so many people with whom I can share the celebrations.  Much good food and merriment was had by all.  Here is a quick recap. 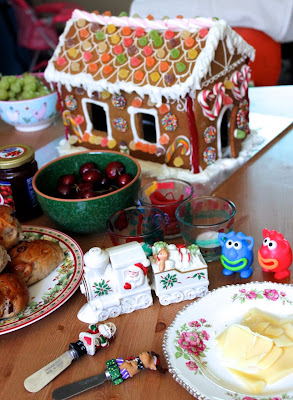 We spent Christmas morning at our place.  Santa knew where to find Sylvia with many tiny and little things.  (Did she have to wake us so early to tell us?)  We shared a simple breakfast of cranberry nut rolls, cranberry sauce and swiss cheese.  Then we gave out presents among our small family before heading to Geelong to my parents' house.  (I will write more about the gingerbread house but it was at breakfast, and then taken to Geelong with us.) 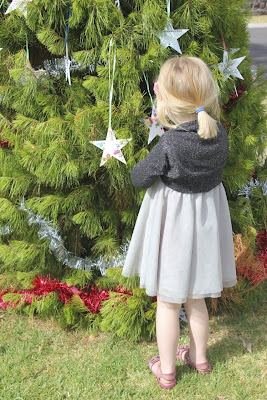 At my parents' place it was the usual merry mayhem.  Heaps of presents, a big family photo and my mum in charge of an army of helpers getting Christmas dinner underway. 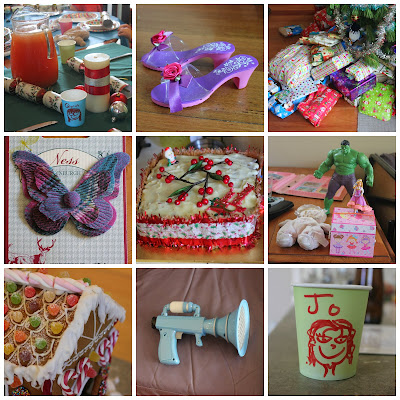 To make sure no one went hungry while lunch roasted and simmered and fried, we had some appetisers while we waited.  My brother in law Fergal fried up some blini and topped them with goats cheese and beetroot caviar.  They were splendid. 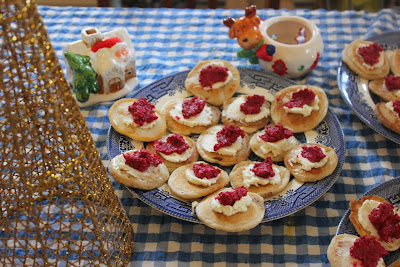 I took down my Christmas nut roast (see top picture too).  It never lets me down.  This year my mum made little stuffing cups.  The flag in mine (below) is to show the vegetarian ones.  I also had roast potatoes, roast pumpkin, cauliflower cheese, peas and cranberry sauce.  Followed by plum pudding and custard and then some chocolate ripple cake.

Mum does an amazing job at Christmas.  For Christmas dinner she had twenty-two people, including a vegetarian and a couple of celiacs.  On Boxing Day she made lunch for thirty-five people and then the day after for a mere ten of us. 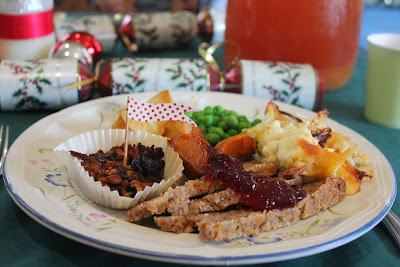 My sister Chris, with Fergal and Dash were here from Ireland this year.  It was a great novelty to go to the beach but Fergal and Dash love swimming so much that I don't think they just did it to say that was where they spent Christmas day.  Sadly I forgot my bathers.  Luckily my parents gave Sylvia a swim suit for Christmas.  We enjoyed coming along to Torquay with the Irish rellies and my dad.  I was surprised at how busy it was but then again it was a lovely sunny day 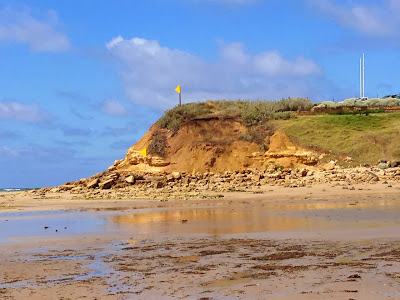 On Boxing Day my dad's family came, plus a few family friends.  E and I have a tradition of staying the night at my mum and dad's place and going to a film on Boxing Day while Sylvia stays with her grandparents.  This year we saw Philomena, starring Judi Dench and Steve Coogan.  It is a really beautiful film but such a sad story. 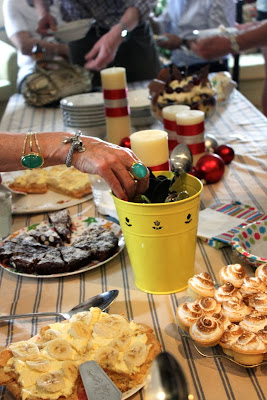 By the time we came out of the film, my parent's home was full to the brim.  The table was heaving under cold meat (nut roast slices for me), salads and roast potatoes.  But it was dessert that gave us the biggest laugh.  My mum made the caramel tart that my grandmother used to make.  Dad and his siblings dived upon it with such excitment that the rest of us did what my family does.  We reached for our cameras!  We also had my panforte (more about that later), mum's black forest trifle, pavlova and my sister in law, Erica's cute lemon meringue pies. 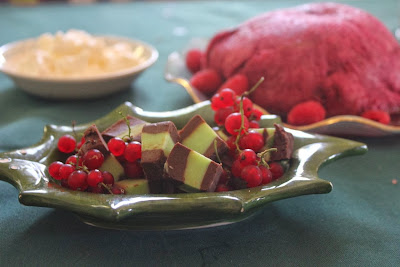 On the next day, my mum's sisters visited.  The leftovers were wheeled out again and we had more cold meat/nut roast, salads and roast potatoes.  Which is not to say that my mum wasn't making more dishes for the occasion.  For dessert she delighted my aunty, Liz, with summer pudding that she makes with panettone.  We even had some of my peppermint fudge. 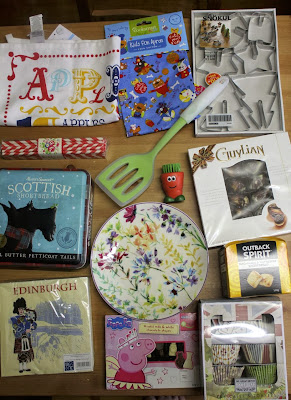 Finally we drove home to collapse in exhaustion.  Today we had a quiet day in.  The days just after Christmas always feel a bit sad when there are no presents left under the tree and the build up has gone with the bang of a cracker.  Above and below are a selection of presents.  You can see we were well and truly spoilt. 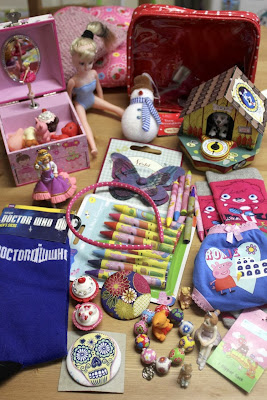 Oh and there was lots more.  Singing "I'm getting nutting for Christmas" in the car.  Cricket in the backyard.  Ice creams on the way back from the beach.  Fran doing the girls' nail polish.  Playing at the local park.  Water bombs in the backyard.  The side fence being pulled down during Christmas lunch number 3. Cherries.  Dr Who (and Quin's excitment).  Toy soldiers.  Paper cup portraits by Fergal.  Leftover nut roast sandwiches.  A broken champagne glass.  Sylvia tottering about in her new dress-up high heels.  Below is a picture of her having fun with her cousin Dash and a sprinkler in the backyard. 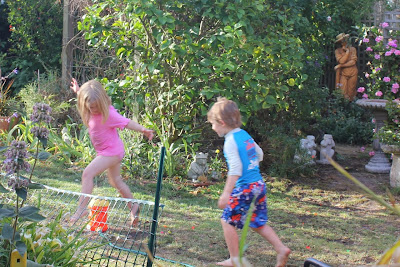 Hope you and yours also had a merry Christmas and a happy holiday.  I will be back with Christmas recipes soon.  Meanwhile here are a few Christmas quicklinks I enjoyed this year: