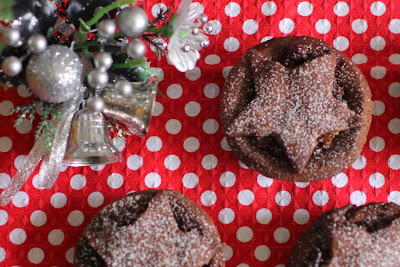 Christmas divides us into two groups.  Those who love mince tarts and those who don't.  For me, it isn't Christmas without a mince tart.   Yet I have been seeking chocolate in my mince tarts in recent years.  I have a vision in my head that I must have seen once.  That filled me with desire.  I think I might have just found it today. 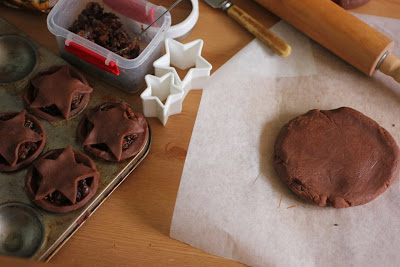 It is not that mince tarts that fill my imagination as the festive season gathers pace.  I have much festive baking I hope to do if only the weather and time are kind to me.  Mince tarts are an excellent start.  Last year I made mince tarts with chocolate chunks in them.  They were good but it wasn't enough chocolate.  I wanted a chocolate pastry. 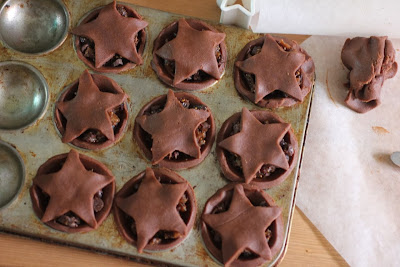 It is not just the taste but the aesthetic.  These brown stars have a dark rich allure that a pale pastry just can't offer.  Don't you think?  I know that it will horrify the purists.  It is not intended to be traditional.  These mince tarts are to please the chocoholics like myself.

I like fruit mince but I don't eat a lot of it.  The chocolate helped motivate me to use up the remaining fruit mince from last year's batch.  Was I tired of seeing it in the fridge!  At least I could be proud that my fruit mince lasted that long. 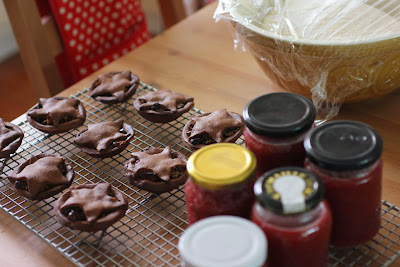 I made these mince tarts this morning along with jam (coming soon) and sourdough bread.  I then had lunch with a friend at Little Deer Tracks .  After a fine risotto we came back to my place for a cuppa and a chocolate mince tart.  I wasn't quite sure I got it right. 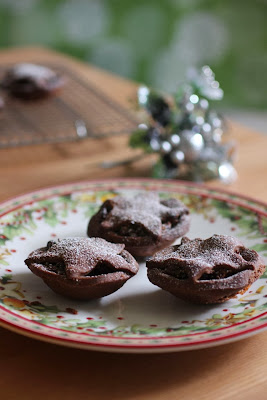 I met E for dinner in Carlton and went to the Cinema Nova to see Night Train to Lisbon.  It was a very beautiful film with an intriguing story that unravelled at a suitably leisurely pace.  We think I might have been the youngest person in the cinema.  It is that sort of movie.

We came home and had a cuppa and a mince tart.  This time I really enjoyed the taste of the chocolate in the pastry and the chunks in the filling.  The pastry was buttery and short.  They were as good as I had hoped it might be.  Aalmost good enough to tempt me to make more fruit mince.  Almost.  I just don't think I could bear to have fruit mince greeting me every time I open the fridge for another year. 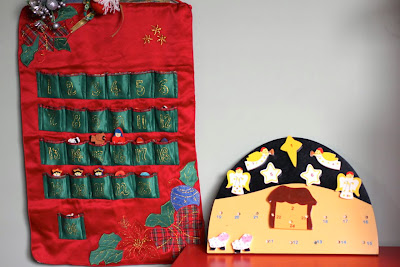 While we are on the subject of Christmas I thought I would share bit more Christmas cheer.  Above are two advent calenders.  On the right is one that has little numbers by each hole.  Each day we add another peg to build up the nativity scene.  On the left is a calender with little pockets.  This year it is working to fill them with the nativity pegs.  Sylvia is really enjoying adding the pegs each day.  Jesus had made a few outings already though and she keeps asking when he will be born. 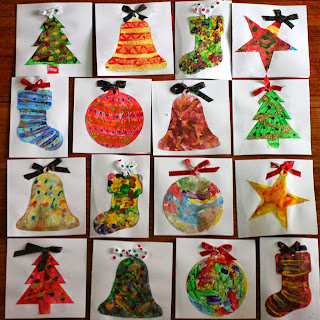 We also had a craft session to make Christmas cards for Sylvia's kinder friends.  Sylvia helped me paint the shapes with colours and glitter glue.  Then I attached ribbons and glued them to cards while she was feeling ill this week.  Thanks to Red Ted Art Blog for the idea. 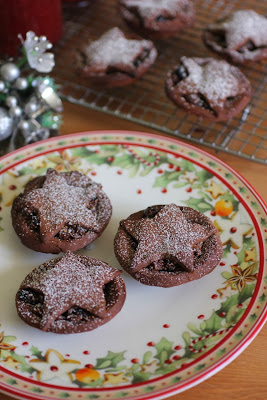 I am sending these chocolate mince tarts to Choclette for We Should Cocoa.  The theme for this blog event is chocolate and alcohol.  The fruit mince has whiskey in it so hopefully this will fit the bill. Now I am off to clear a space for my Christmas tree.  We will be decking the halls this weekend, so to speak!

Place butter, flour, icing sugar and cocoa in food processor and blitz til you get the texture of fine breadcrumbs.  Add egg yolk and 1 tablespoon of water until the mixture becomes a ball of pastry.  If too crumbly add another tablespoon of water (1 tbsp was enough for me).  Wrap pastry in clingwrap and leave in the fridge for about 1 hour.

Preheat the oven to 200 C.  Take the pastry from the fridge, unwrap and place between two sheets of baking paper.  Roll out to about 3mm thick (I think some of mine was thicker) and cut into circles to line greased patty pan (little cake) tin.  Mix fruit mince with choc chips and fill each circle with fruit mince mixture.  Cut out stars and place on top of fruit mince.

Bake for about 25 minutes or until the pastry is crisp and smells cooked.  Cool on a wire rack.  Keep in an airtight container.  Dust with icing sugar to serve.

* The Baking Corner recipe said it would make 24 mince tarts but mine only made 9 with a few scraps of pastry leftover.  I am not sure I rolled the pastry out thinly enough but it seemed ok when we tasted the tarts.  Their recipe called for more fruit mince but my little tub was enough for 9.

On the Stereo:
Christmas - Low
Posted by Johanna GGG at 23:04