ANZAC biscuits with cranberries and chocolate 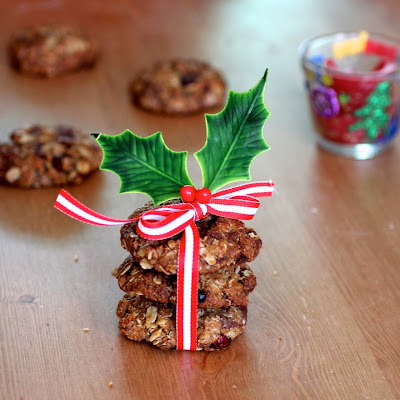 Last night we turned on the heater and I curled up on the couch with a warm cup of tea wearing my slippers.  You would have thought it was winter.  It was a wet cold day.  A mere 16 C.  Melbourne is known for fickle weather but it is still surprising in summer to have it a sweltering 36 C one day and a chilly 16 C two days later.  At least it is good for baking. 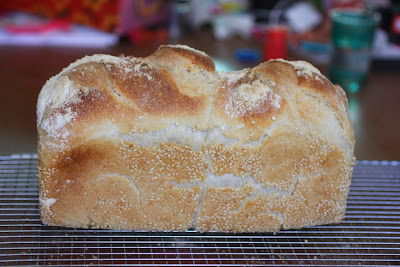 I really wanted to tell you about some yummy ANZAC biscuits I made this week.  First though, I thought I might tell you about this loaf of bread.  I was kneading it when I heard on the radio this morning that Nelson Mandela died.  It was a significant moment.  Nelson Mandela has been there all my life as a champion for peace and social justice..  I heard someone comment on the radio that Mahatma Ghandi's legacy hasn't been as great as it had seemed at the time of his death.  I hope Mandela's work will continue to inspire for a long time.

Earlier in the week I had planned to buy Sylvia an ice cream.  We sometimes have one after swimming.  It was so cold that I told her she could choose something for me to bake.  She asked for ANZAC biscuits with choc chips. My mum makes ANZAC biscuits regularly and Sylvia loves them.  I was proud of her for asking for chocolate to be added.  The very idea made my mum gasp in horror when I told her later.

[As an aside, it was so cold that I told Sylvia to put on a cardigan like her red one.  She said she couldn't because it was the carpet in the corridor in Dolly's house, which she had created with her dolly highchair.  I said maybe we could get another cloth for the carpet.  Sylvia said no, Dolly liked the soft carpet on her bare feet.] 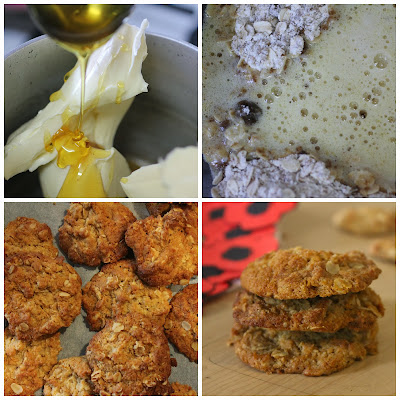 I do mean to make ANZAC biscuits occasionally for Sylvia.  I made them just after ANZAC Day this year.  I never got around to posting them.  (See above photo collage.)  I had used some variations on the recipe that I posted years ago.  When I returned to my notes they were uselessly brief.  So I rang my mum and got the recipe.  She advised me to make sure the mixture was not too runny or too crumbly. 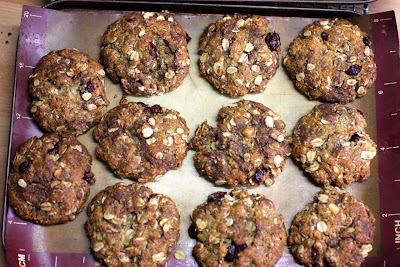 I only had the remnants of a bar of Lindt sea salt dark chocolate in our chocolate stash.  I decided to add some cranberries.  I had forgotten that I pour hot liquid into the dry ingredients.  The chocolate half melted.  The biscuits were a bit darker than ANZACs should be.  Yet we all loved them.  The chocolate patches and the juicy but slightly tart cranberries lifted the flavour from the ordinary biscuit I ate regular as a child to something special.

I can't help but think that these biscuits would make excellent Christmas gifts.  I have written a lot about the history of ANZAC biscuits elsewhere.  So I wont go into detail here.  However as they were sent overseas to soldiers in World War I they were made to last for some time.  Which is always good with gifts.  You can never be sure when they will be eaten.  I think the chocolate and cranberries give them a festive air, while the oats make them a little healthy. 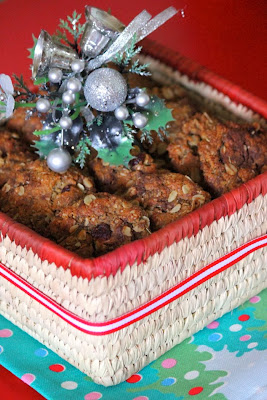 I will also note for international readers that ANZAC is an acronym for Australian and New Zealand Army Corps.  In Australia these biscuits are serious stuff.  The Australian Department of Veterans Affairs (DVA) has a policy regarding ANZAC biscuits:

"It should be noted that approvals for the word 'Anzac' to be used on biscuit products have been given provided that the product generally conforms to the traditional recipe and shape, and is not used in association with the word 'cookies', with its non-Australian overtones."
(From DVA website)

Please don't call them cookies or let the DVA know I added chocolate and cranberries or we might all be in trouble!  And cranberry and chocolate oat cookies just doesn't sound right! 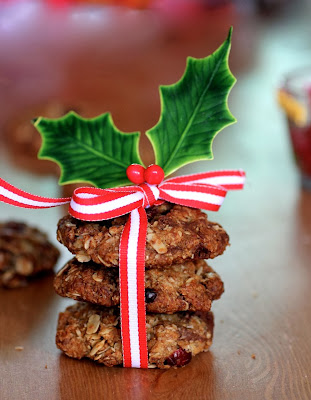 I have been considering baking some biscuits (also known as cookies in America) for Christmas presents.  Baking is fine with me.  Packaging is a challenge.  So you can see in the photos that I have been experimenting.  If you are thinking about baking biscuits as gifts, here are a few more ideas.

More biscuits with a hint of Christmas (from Green Gourmet Giraffe):

ANZAC Biscuits with cranberries and chocolate
Makes about 20 biscuits

Mix oats, coconut, flours, sugar, chocolate and cranberries in a medium to large mixing bowl.  Melt butter or margarine with golden syrup in a small saucepan over medium heat.  Dissolve bicarb soda in boiling water and tip into the butter and sugar mixture.  It should froth up in a pleasing way.  Tip into dry ingredients and mix until combined.  Take small handfuls and shape into balls and flatten slightly (mine were about 1cm thick).  Place on a lined baking tray.  Bake at 180 C for about 10 to 15 minutes or until golden brown (mine took 15 minutes).  Cool on the tray (mine were crumbly when warm but held together well when cool).  Store in an airtight container.

On the stereo:
Trumpets: Club Hoy
Posted by Johanna GGG at 22:57