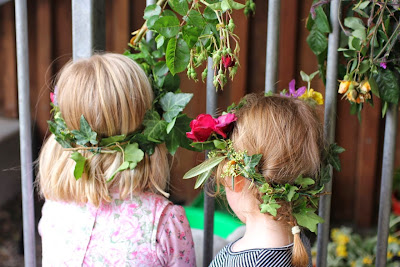 Yesterday, after a book launch, I went along to the Spensley Street Primary School's Tempting Fete in Clifton Hill.  Last year E played there with his ukelele group and we enjoyed our visit.  I wrote about it.  The organisers read it and let me know it was on again this year.  How thoughtful!  And helpful.  I took Sylvia and her friend Amelia.  We met up with my friend Yav and her little girl.  A great time was had by all. 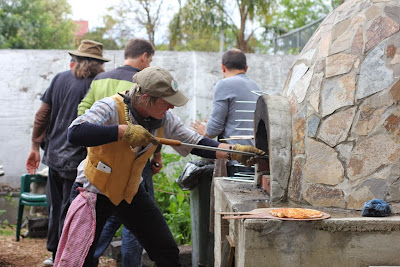 Upon arrival I decided to take the easy option and have pizza for lunch.  It was something I knew all three of us would love.  Yav did the same.  There is a pizza oven in the school yard and the pizzas are excellent.  Thin margheritas with leaves of fresh basil on top, if that is your thing.  (Try suggesting that to two 4 year olds!) 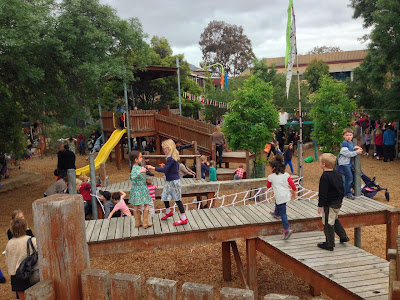 The pizza was a good strategic option.  Though I know there were some interesting food choices around the back, queuing for pizza meant the kids could play on the nearby playground.  It was easy to keep them amused and keep an eye on them while we waited. 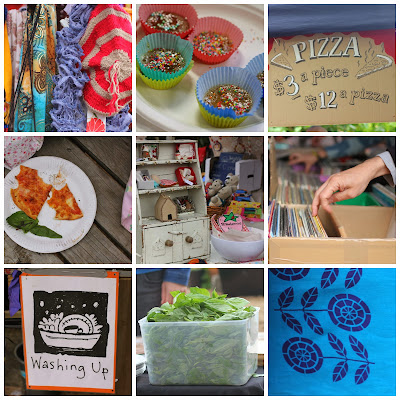 Last year, I felt a little overwhelmed at the tyranny of choice.  This year was a little easier because the fete was fairly similar and I had a feel for the lay of the land.  As with last year we enjoyed the craft stall.  E would have enjoyed the second hand record stall.  None of would fancy washing the dishes but I am still impressed that there is a dishwashing station for the dirty plate. 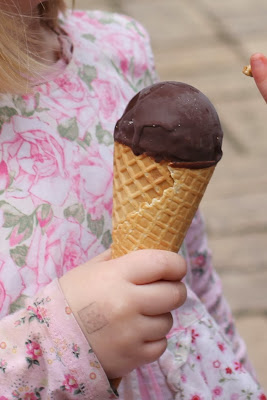 After the pizza I was hoping to find some nice cake.  Sadly there was not much choice.  It is a testament to the success of the fete that you need to get in early to buy cake.  By the time we finished pizza and playtime, the cake stall was sold out and even the brownie bites and snickerdoodles at the coffee station were gone.  The cafe that had the marvellous hedgehog last year only had toffees and sugar cookies left.  Not my sort of thing.  Though my inner child was delighted to see old fashioned jaw breaker toffees for sale.  Instead I joined Sylvia and Amelia in having an ice cream. 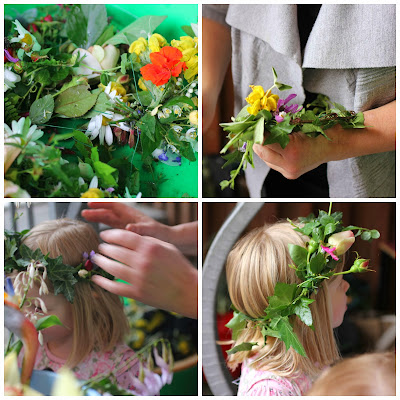 Last year, Sylvia had not wanted a garland.  This year she and Amelia were eager for one.  The garlands are just gorgeous.  They are reminiscent of ye olde English village fetes and May queens and the innocence and closeness to nature of times gone by.  The little girls looked so sweet in theirs.  It gave the fete a touch of class to see lots of kids with garlands as well as face paint and crazy hair. 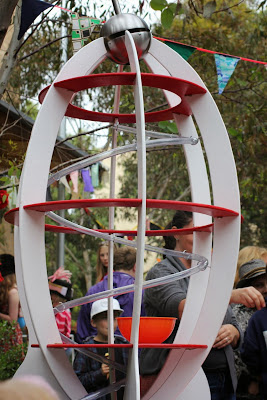 Garlands on and ice creams in hand, we sat and watched some of the activities.  Right by us was the jaffa crushing machine.  It is a fancy contraption where the jaffa (a little chocolate ball covered in a red shell) rolls down the tube and onto a tray where the kids crush it with a mallet.  We didn't get into all the games but it was fun to watch. 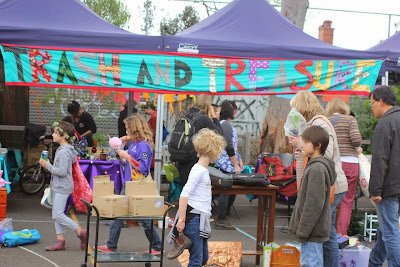 Ice cream finished, we wandered off to look at the second hand toys, the trash and treasure and the second hand books.  I couldn't help feel that coming this late meant that some of the best stuff had gone.  However it also meant everything was going for a song.  We were quite happy to walk away with some hand puppets, some old crockery and a few books. 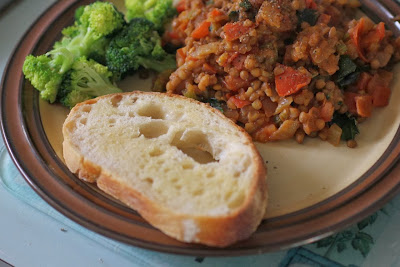 By the evening, I was quite tired. Rather than the pasta bake I had planned, I made a simple lentil dish with some leftover marinade from a batch of facon (tofu bacon).  It was rather good.  I hadn't planned to write it up but I enjoyed it so much that it seemed worth jotting down.  Hence the photo focuses more on the slice of sourdough bread (more on that soon) than the lentils.

I am sending these lentils to Princy of Spicy Food for My Legume Love Affair (#64), the monthly event celebrating beans and lentils and legumes, overseen by Lisa of Lisa's Kitchen and founded by Susan of The Well Seasoned Cook.

Heat oil in a frypan and cook onion, celery and garlic until soft.  Add remaining ingredients.  Check and adjust seasoning.  Bring to the boil and cook for 5 to 10 minutes until tomoato soften and mixture thickens.

*If you are not in the habit of having leftover tofu bacon marinade like we are, you could substitute here some soy sauce, maple syrup and smoked paprika.

On the Stereo:
The best of Blur
Posted by Johanna GGG at 23:02