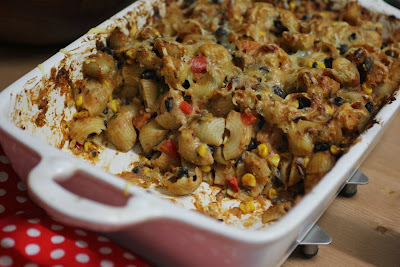 It is one of the mysteries of life that I love Mexican food every though I don't like spicy food.  Riddle me that.  Of course there is so much more to Mexican food than chillis, especially when in the comfort zone of my own kitchen.  And I never claim that I what I make is authentic.  Especially when pasta is involved. 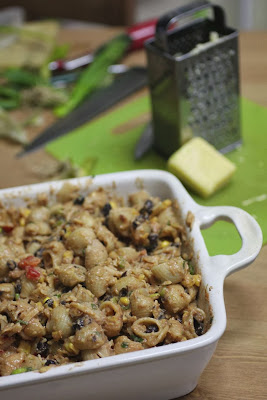 I have a surplus of pasta in my pantry.  Too many packets that I bought at the Mediterranean supermarket in search of alphabet spaghetti for Vegan MoFo, more pasta from the Brunswick IGA, and beetroot and nettle pasta from the Melbourne Show.  As if we didn't already have that packet of pasta that E had been ignoring in the cupboard every time he made pasta for weekend lunch. 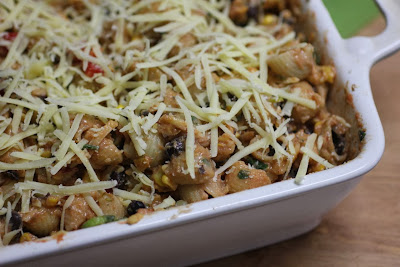 Pinterest yet again was a source of inspiration when deciding I must eat some of this pasta.  I loved this Enchilda Pasta Casserole by Table for Two and then I noticed it was not vegetarian.  Instead of frying minced beef I just drained some tins of black beans.  Much easier.  I meant to open a tin of corn kernels and accidentally opened a tin of creamed corn.  I hate it when I do that.  I worried it would overwhelm the other flavours.  It didn't.  I was pleased to be able to use the leftover cashew tofu crema from tacos.  In fact if you used a vegan cheese, it would be a vegan meal.  Mine wasn't.

Then it was just a matter of popping it in the oven and sitting down with your embroidery in front of the open fire.  Oops that is just my fantasy.  Nope.  But it does bake while you rush around after a lively preschooler and try and make some semblence of tidiness in the house.  Mine took 40 minutes but given that everything is baked in the casserole, you could easily turn up the heat and bake it a bit quicker.  And it will feed a crowd (or a potluck) or just give you loads of leftovers. 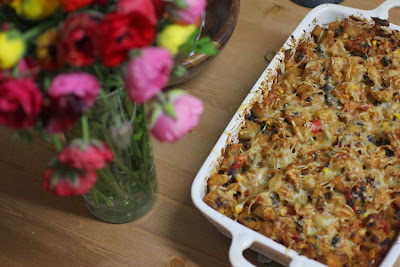 I am sending this pasta bake to Louise at Months of Edible Celebrations.  She always has something interesting to say about any foodie celebration day so it is no surprise that Louise is celebrating her blogiversary with a World Pasta Day Party during America's National Pasta Month.  You can also find her pasta discoveries on her Pasta Pinterest Board. 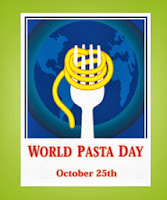 * If you don't have leftover cashew tofu crema you could use yoghurt, cream cheese or sour cream instead.
**This pasta bake could be made vegan by using vegan cheese or even some nutritional yeast flakes here instead of dairy cheese.  There is so much flavour that it doesn't depend on the cheese.

Cook the pasta for about 10 minutes until al dente or according to the instructions on your packet.  Lightly cook the carrots, capsicum and corn.  (I did each vegetable separately in the microwave - for 1 to 2 minutes each, checking after 1 minute.)  Mix pasta, vegies with rest of the ingredients, leaving about a quarter of the cheese.  I mixed mine in the casserole dish.  Sprinkle with the cheese that had been set aside.  Bake at 180 C for 30 to 40 minutes or until the top is brown and crispy.

On the stereo:
Love: The Beatles
Posted by Johanna GGG at 15:06