Lorne cafe: Bottle of Milk (and the old fashioned servo) 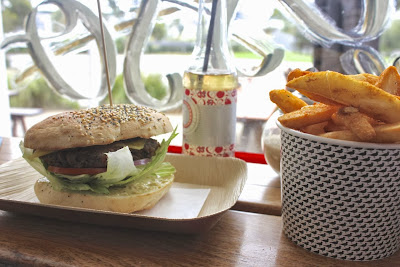 When we drove to Port Fairy in September, Sylvia decided she wanted to go to Lorne.  I decided it would be fun to drive down the Great Ocean Road for part of the trip.  Unfortunately all the recent roadworks down that way confused me on roads I know very well and we ended up in Winchelsea.  So we drove through the bush to Lorne instead.  At the beginning of Spring, Lorne was far more subdued than when we visited in the height of Summer last year. 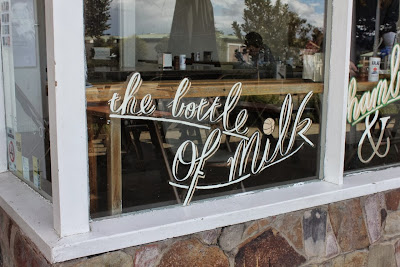 Quieter means it is easy to find a table in a cafe.  We had lunch at the Bottle of Milk. The nonchalant retro vibe was more big city than seaside town.  Yet it works.  The name is reminiscent of an old style milk bar and the menu is simple.  Mostly burgers.  Fine burgers.  The buns are from La Madre sourdough bakery.  The menu claims that "all ingredients are farmed and sourced locally when possible, and organic.  The waitresses are young and hip.

Alas the creative naming of burgers seemed limited to the meat burgers: Mad Cow, Hell Yeah, Fire Engine, What a Pickle.  A chicken burger was even named What Everybody Gets.  The burger I chose was called Lentil Lentil.  I think this name might have been to distinguish it from the Hot Lentil.  My Lentil Lentil burger had a home made lentil patty, tasty cheese, carrot, lettuce, tomato, onion, house mayo and home made tomato relish.  Doesn't sound fancy.  Yet it was fantastic.  Lots of vegies, a satisfying patty and a great bread roll. 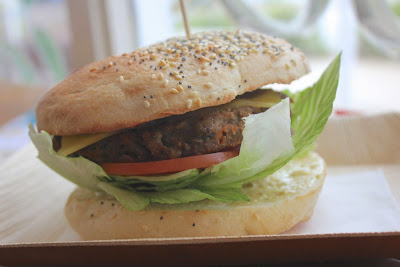 We also had chips on the side (E had a cheese burger and Sylvia just ate the chips).  The chips were really good.  Fresh, piping hot, salty and crispy.  What's not to like.  Actually I think E would have preferred the local fish and chip shop.  He took umbrage at the waitress dropping a little saucer of tomato sauce that accompanied the chips because the sauce splattered over his jeans.  And he spied a dead fly.

Personally, as a vegetarian in a small town, I would much prefer to eat in a place with a dead fly and sauce on my trews and get a decent meal than just eat fried protatoes for lunch.  They even had a sign promising garibaldi biscuits.  I would have bought one but they had sold out.  I gather the Bottle of Milk is fairly busy in summer but you can always take your burger with you and eat it on the beach. 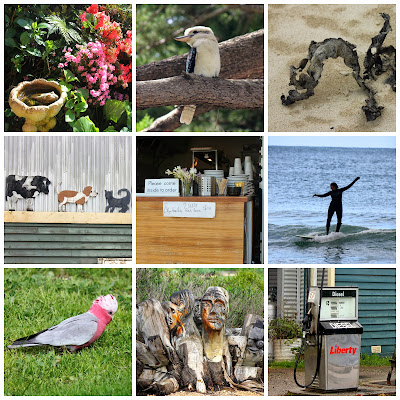 After lunch, we walked down the beach, stopping to watch some kookaburras and galahs.  The waves were fierce.  It was great fun watching the surfers ride the wave and then get dumped.  We didn't watch long.  The sun went as quickly as it come and the rain bucketed down.  It was that sort of weather. 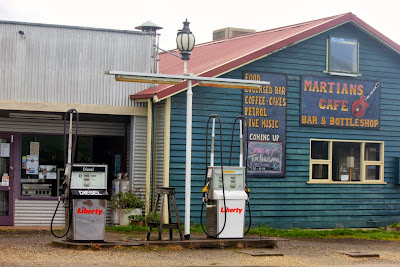 Then we drove on to our holiday cottage in Port Fairy.  The landscape was just gorgeous.  I only stopped once for photos in Deans Marsh.  I just love these old style service stations. (Known colloquially as The Servo.)  They remind me of the ones we went to in my childhood where the garage man would fill up your car with petrol and clean your windscreen.  Nowadays we mostly go to brightly coloured petrol stations in the city where the idea of service seems quaint and rare.

Finally, I notice on the website of The Bottle of Milk, that they will be coming to Torquay.  This is a far easier destination for me.  Perhaps I will sample their burgers again sooner than I expected!

The Bottle of Milk