Port Fairy, sightseeing and what we ate on holliday 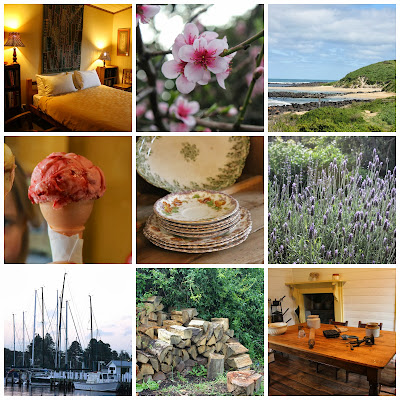 We had a relaxing holiday at Port Fairy (Victoria), in September.  I usually like to try different holiday spots but I didn't have the energy this year and went to the Orchard Cottages in Port Fairy where we have stayed before.  It was a lovely place to get away from it all.  No wifi, no news broadcasts, no idiots on the road*, nowhere we needed to be.  Just coastal walks, historic cottages, lots of reading and good food. 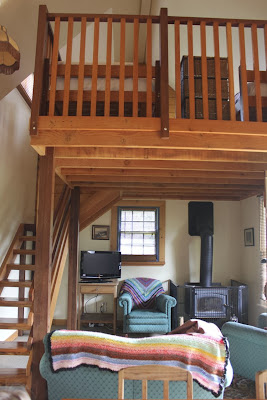 This year we stayed in a different cottage to our last visit in 2010.  Sylvia is obsessed with stairs so we chose the cottage with a mezzanine bedroom.  I then stressed about her coming downstairs in the night in an unfamiliar place.  She was, of course, fine.  In fact she loved her little bedroom (below) despite being unsettled when it was sleep time for the first night or so. 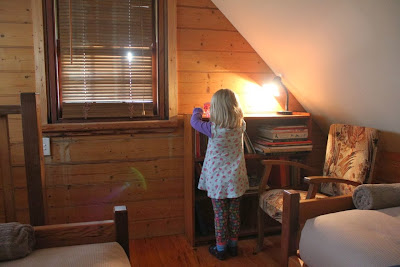 We really love these holiday cottages.  E picked up a book on British comedians and read it while he was there.  Sylvia had a new skipping rope.  How it works is still a mystery to her.  She used it as a pulley that dangled over the edge of the mezzanine bedroom and pulled all sorts of thing up - such as Dolly in a hat.  I think this was inspired by watching Tangled on DVD, a modern version of the Rapunzel story. 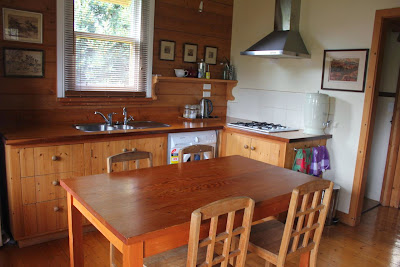 The kitchen is well equipped, though there is only a stovetop but no oven.  I included a couple of bags of groceries in our luggage.  Rolled oats, tetrapak soy milk and maple syrup for porridge in the morning, dried chickpeas, vegemite, rice crackers, dried apricots, chocolate shortbread, apples and pears for snacks.  Pasta, pasta sauce, tinned chickpeas, baked beans, boxed Indian curries and a few unused vegies for meals.

I brought aIong some plastic plates and bowls for Sylvia and plastic tubs in case we had leftovers of anything.  I also brought my favourite little vegetable knife and chopping board.  I hate using other people's chopping boards.  Who knows what has been on them. 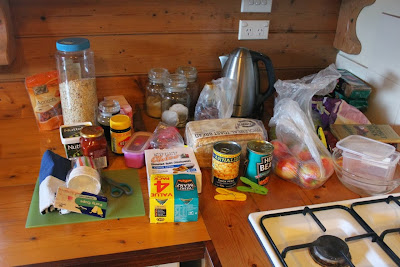 Upon arriving in Port Fairy on our first night about about 5.15pm, we decided to buy some bread.  (I had forgotten it.)  I was surprised that the supermarket was closed.  Fortunately we got some from a bakery just before it closed.

The other local quirk was that the drinking water out of the tap was horrible.  We drink lots of water from the tap in Melbourne.  The Port Fairy drinking water was so bad that we just drank soda water we had brought with us and when it ran out we bought bottled water. 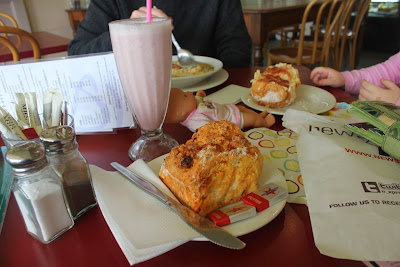 Despite having brought lots of food, we headed out for brunch on our first morning.  I am always eager to walk around a place where we are holidaying.  We went to Rebecca's where we had been on our previous trip.  E had the wild rice porridge and claimed it was rice pudding rather than porridge.  Sylvia and I had scones.  Hers was plain and mine was a savoury one with cheese and sun dried tomatoes. They were huge and nice but not brilliant.  We also shared a banana and strawberry smoothie that was nice but again not brilliant.  (Too sweet and I think it might have had ice cream in it.)

In the top photo collage you will see a strawberry ice cream.  That also came from Rebecca's.  They have an ice cream shop.  While I wasn't wowed by the food or service at Rebecca's cafe, we all thought their ice cream was fantastic. 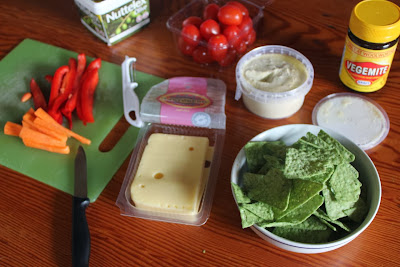 After brunch we wandered along the main street.  I bought some glorious green Guacamole flavoured chips and hummus at Dariwill Farm store,  We then went across the stress for swiss cheese and cherry tomatoes.  together with bread, vegies and vegemite, it made an easy lunch.  (We also bought some red Spicy Chile and Lime Chips by E Sabroso which E loved but were too spicy for me.) 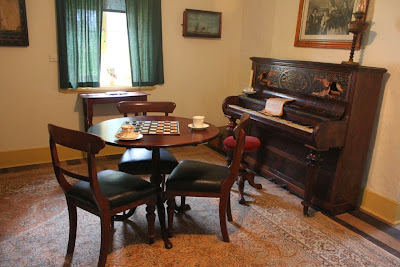 In the afternoon we visited Motts Cottage (5 Sackville St) because it was only opened a few hours each week.  It is a workers cottage that was built in the 1840s-1850s, one of the oldest surviving buildings in a town that was declared in 1843.  It is a small dwelling but worth a visit. 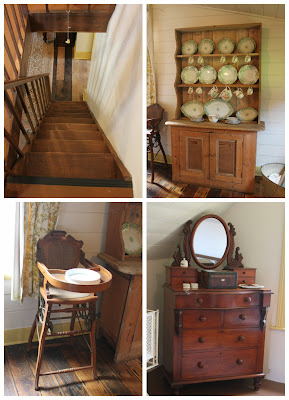 So much lovely old wood.  Some joker has hung a little rubber duck from the low ceiling above the narrow staircase to remind people to duck when they pass it.  Sylvia had endless amusement with the duck and the stairs.  It took a while to convince Sylvia to leave, and even longer to leave due to the burst of heavy rain as we were about to go. 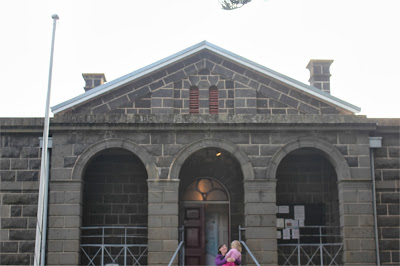 We continued our stroll through Port Fairy's history with a visit to the  old courthouse which is now the History Centre (30 Gipps St).  It is run by the Port Fairy Historical Society.  They have set up the main courtroom with dummies in a mock court case.  I explained their roles to Sylvia a lot of times.  The jail cell remains but the other smaller rooms are set up as esoteric museum rooms.  Old whale bones, tales of housework in the Eighteenth Century, masonic outfits.  I also enjoyed talking to the lady at the desk about her memories of the railway before it was closed in 1977. 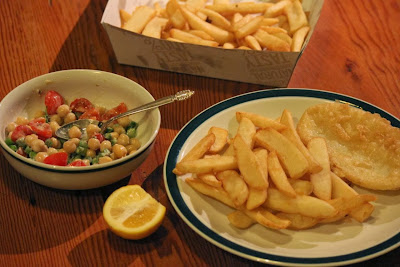 By evening we were tired.  E had loved takeaway from Wishart's Fish and Chippery on our last trip.  We couldn't wait to go there again.  Sadly it wasn't as impressive as previously.  Maybe it was an off day.  I went there to buy our fish and chips.  I hoped they had corn jacks.  No luck.  Instead I was told they had spring rolls.  I was told they were vegetarian but when I asked about ingredients I was told they had lots of cabbage and just a little meat.  Sigh.  I know I was in the country.

Despite this, I had a very nice meal.  As well as my chips and a potato cake I mixed myself up a very tasty bowl of chickpeas, cherry tomatoes and capsicum mixed up with a little hummus. 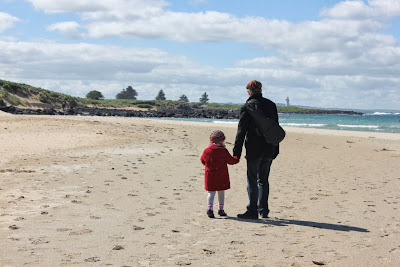 The next day, we decided on a walk to the Griffith Island lighthouse.  We still have strong memories of walking there on our last visit and being caught in a downpour.  This time the sun was out and we were about to walk the circuit of the island over rocks and sand as well as through the scrub. 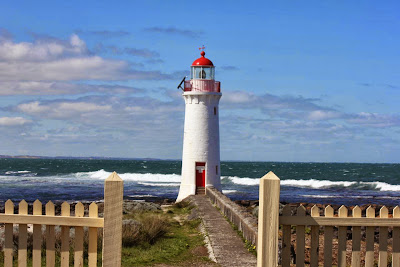 At the lighthouse we stopped and ate chocolate shortbread and apple while E played his ukelele.  Sylvia was having a lovely time until she ran over the uneven path and fell heavily on her knee.  I was glad she was brave and walked most of the way back.  She is a little heavy for carrying over a kilometer. 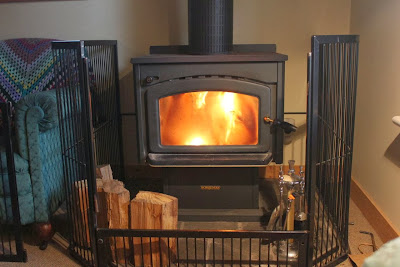 I have written separate posts about our visit to Tower Hill and the Clonmara Tearoom.  We didn't eat out much.  It was relaxing to eat porridge in the morning at the cottage or to stay in by the warm fire and have dinner.  This kept our holiday costs down and lightened our luggage on the way home (via Winchelsea Shire Hall Tea Rooms). 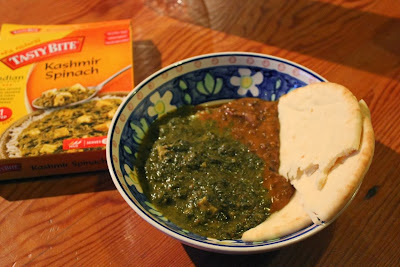 We never ate the pasta meals I had brought but we did enjoy some Tasty Bites curries.  The Madras Lentils was lovely and creamy but the Kashmiri Spinach was a bit watery.  Fortunately we have some naan bread to mop it up with.  I think I would prefer their Agra Peas and Greens curry next time. 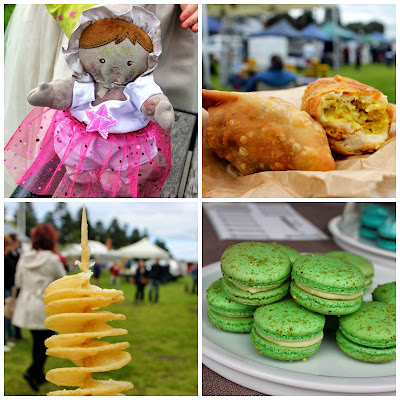 On our last morning, we ate our porridge, packed the house and headed off to the Port Fairy Community Market.  It was a mixture of food and craft.  Jams, honey, pies, potatoes, bread, vegies, wind chimes, greeting cards, jewelery, clothes, second hand crockery.  We had to go back to the car to fetch Dolly so she could try on a fairy dress.  Who could resist it!

We had an early lunch.  Sylvia had the fried potato spirals on a stick.  E and I had some excellent samosa and pakoras from the Indian stall.  Their curries looked delicious too.  Sylvia then had a pink macaron (from the nice lady who sold me the brownie with salted caramel and candied walnuts).  E had a green pistachio one.  A great start to our trip home.

*Yes, driving in the country was a nice change from the competitive city roads.  No idiots racing past me at a dangerous speed.  No idiot parking their car in the clearway where I am driving.  No idiots driving so close behind me that they leave no room to deal with unexpected events.  No idiots turning on a red arrow because the person who turned in front of them had an orange arrow and so they feel entitled to turn as well.  No idiots changing lanes in front of me and causing me to brake suddenly so I don't run into them.  No idiot behind me at a red light letting his foot off the brake and rolling into the back of my car.  The last happened this morning.  No damage.  Phew!
Posted by Johanna GGG at 12:52