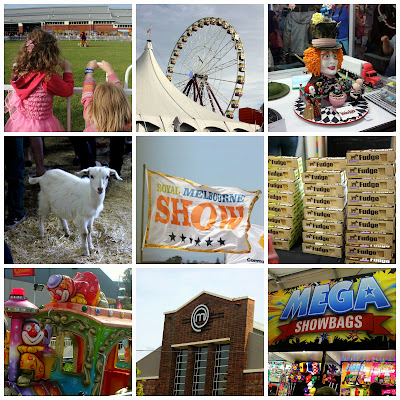 The Royal Melbourne Show is just 'The Show' for those of us who regard it fondly.  I don't think I have got over my childhood excitement at going to The Show.  Which is not to say things haven't changed.  Once I was excited by the showbags, the chocolate, the sugar, the trinkets, the fun fair prizes, the ferris wheel.  These days I love the cake displays, the craft, the animals, the ferris wheel. 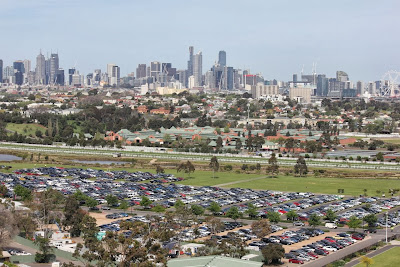 Sylvia and I headed to the Show last week with some of my family.  We took the train.  A couple of years ago we were running late and headed to the show in the car.  After spending hours queuing, searching and getting stuck in traffic jams in tiny side streets, we went to a cafe instead.  I learnt my lesson.  So we stepped off the train and linked up with my dad and my brother by mobile phone.  They directed us to meet at the ferris wheel.  A good meeting place but I wish we hadn't gone there via the noisy, colourful funfair section.  It was sensory overload. 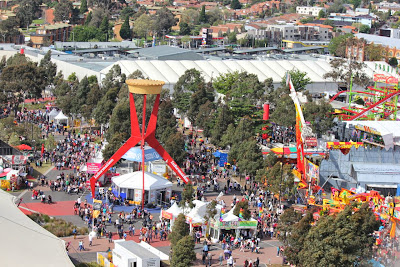 We were all keen to go on the ferris wheel.  I get motion sickness and have never enjoyed the wilder rides but I love the bird's eye view of the ferris wheel.  My niece Maddy was a bit uneasy at the wind while we were stuck at the top.  Sylvia shrieked with delight.  In the above photo you can see the giant pie on a red stand that has been at the Show since I can remember. 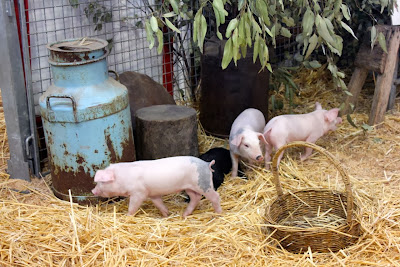 We hadn't quite got the funfair out of our systems and I foolishly agreed to buy some fairy floss for Sylvia.  She liked the sugar but not the sharing and there were tears.  Nothing the animal nursery couldn't fix.  I don't remember being there with animals wondering among the punters before.  They were very cute.  It was a surprisingly relaxed place to be, except when any animal got too close to Sylvia.  My niece Ella is the animal lover of the family and just loved it. 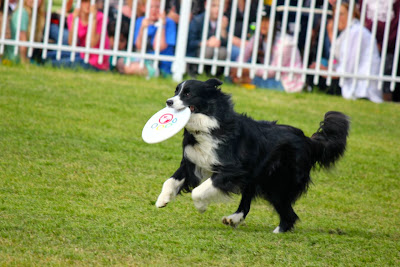 So we wondered on to the dogs.  We sat and watched some shaggy Old English Sheepdogs doing the best-in-show stuff.  Then the PA encouraged us to head over to the display of dogs and frisbees.  Watching dogs chasing and catching frisbees was fantastic entertainment.  They were so gorgeous and so talented. 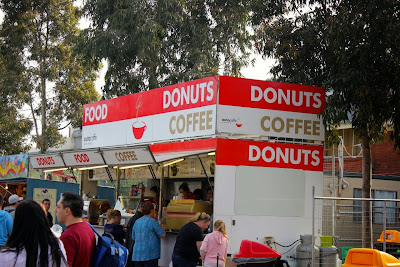 I hadn't had lunch before going to the show (we got the discount after-1pm passes - a mere $25).  At first all I saw were food carts that tick all five funfair food groups - sugar, salt, meat, deep-fried batter, and caffeine.  My dad bought us a doughnut but I was hoping lunch might be a bit more gourmet. 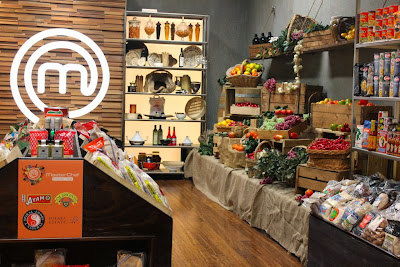 During the first few MasterChef series, I was glued to the screen.  So, although I haven't watched it for ages, I was pleased to be able to wander through the very familiar MasterChef kitchen.  I hadn't realised they had made the last couple of series at the showgrounds.  Wouldn't it be fun to have a pantry like the one above? 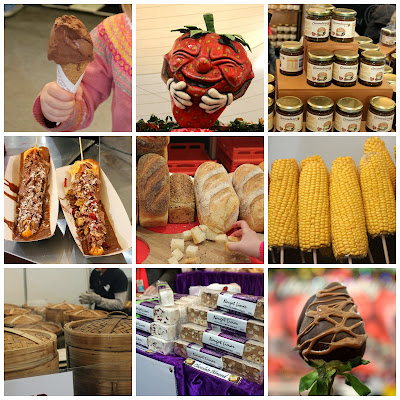 Finally we hit some foodie heaven.  Firstly at the Taste of Victoria pavillion and then at the Woolworths Fresh Food pavillion.  I recognised a few stalls from markets we visit (M and M Pasta and Sourdough Rustica).  I was relieved to be able to make good my promise of a chocolate ice cream for Sylvia.  We tasted fudge and salted caramel sauce, olive oil and bread.  I didn't stop for the cooking demonstration in the Taste pavillion.

Instead we headed onto the Woolworth's pavillion where I was delighted to see a row of stalls selling interesting  light meals.  By now it was almost dinner and I rang E to let him know not to wait for us to eat.  I grabbed a corn on the cob because I needed some vegies.  The vegetable pops, the curries, the sushi, the fancy halloumi burgers and the dumplings were enticing. 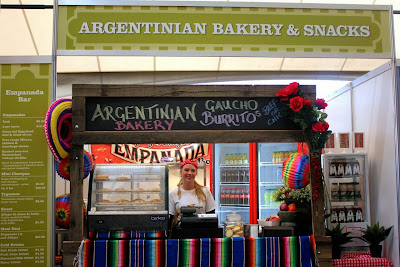 It was the Argentinian Bakery that I gravitated towards.  I had an empanada with smoked corn and Warnambool vintage cheese.  It was amazing.  Just the sort of snack I wish was on sale more often.  I took home a cookie sandwich filled with dulce de leche from the same place.  I also had a double chocolate dipped strawberry.

Then Sylvia and I wandered about, tasting flavoured salts, nougat, caramel popcorn, slimming noodles.  We giggled at the boys making smoothies in machines powered by bicycles.  Sylvia was given a free hat.  Just because she is a cute kiddie.  I was tempted by taste.com.au showbags.  We were both tempted by chocolate drizzled waffles. 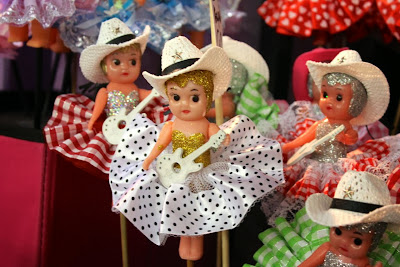 Meanwhile my nieces were hopeful of seeing the man walk the high wire but it was cancelled due to the winds.  So we headed to one of my favourite places: the Art, Craft and Cookery Pavillion.  This is really more like the old fashioned Flower Show we had in my country town as a kid.  There were a few things for sale - soaps, portraits and kewpie dolls.  Mostly it was admiring others' handiwork and talent. 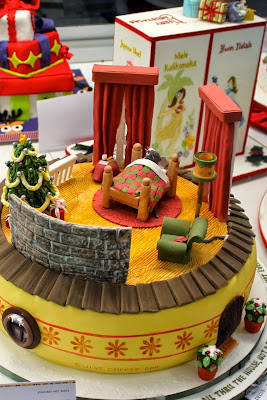 Our favourite part was the cake decorating.  The creativity and the attention to detail is amazing.  We moved from one cake to another, gasping in admiration and delight.  Above is a cake themed around The Night Before Christmas with the little mouse in his bed.  So gorgeous and humourous.  I particularly loved the little mouse wearing his spectacles in bed.  (Details too tiny for my camera to pick up.) 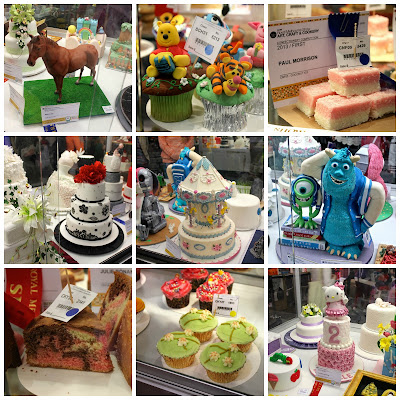 Even the children's sections seemed to have more impressive decorations than anything I ever make.  As well as fancy cakes, there were display cases full of the sorts of cakes we make at home.  Cupcakes, marble cake, lamingtons, rum balls, slices, fruit cake, coconut ice, sponge cakes. 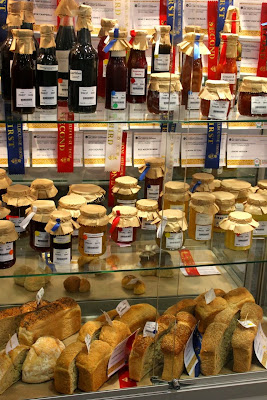 At this point my dad and my nieces left.  My brother and his family had gone off long along to do their own thing and we didn't see them again.  (Well not till the family dinner the next day!)  Sylvia and I soldiered on.  There was so much to see still.  Breads, jams, sauces and other preserves. 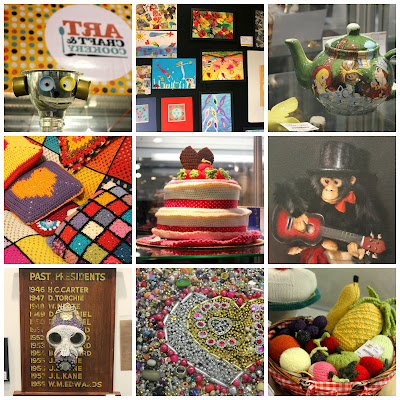 We loved the art and crafts.  A huge range of media and styles was on display.  Knitted cakes, painted porcelain, intricate woodwork, basket weaving, all sorts of painting.  One drawing room was covered in crochet.  The humour of the glamourous gas mask on the honour board.  Pictures and sculptures made of recycled materials.  Sylvia and her dolly allocated each doll their role in a make believe family. 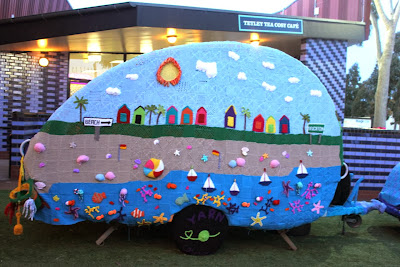 We could have stayed for much longer but it was starting to get dark and I had promised Sylvia a showbag before we left.  On the way out we admired the caravan and car covered in crochet.  Then we headed into the overwhelming Showbag Pavillion.  (I recently read that Showbags are an Aussie phenomenon.)  Like the fairground, this was bright, colourful, noisy, busy and clmoured for our money. 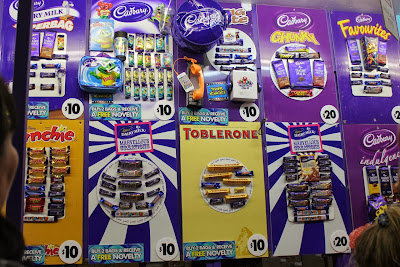 I'd like to say that I was wise and kept my purse closed.  My inner child wouldn't consider such restraint.  Sadly showbags are no longer as exciting as in my childhood.  Our showbags used to be full of samples of sweets as well as little trinkets or toys that you couldn't get elsewhere (think a cardboard 3D superhero scene - I loved that one)!  Now you either buy a bag or food or a bag of toys - and none of them cheap.  As you can see above with the displays of some showbags, there is mostly just chocolates in the food showbags. 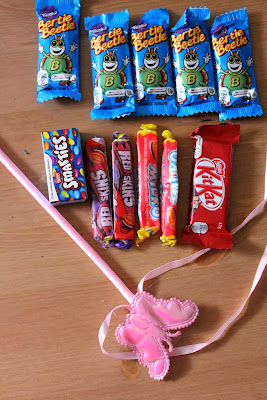 I bought Sylvia a Bertie Beetle showbag of chocolates and a pink fairy showbag of toys (we couldn't find the Peppa Pig showbag).  For E and myself I bought a Tim Tam showbag because I wanted something with an extra gift and they had Tim Tam slipper socks.  Hard to resist, yes?  I also bought a Red Rock crisps showbag because E loves his chippies. 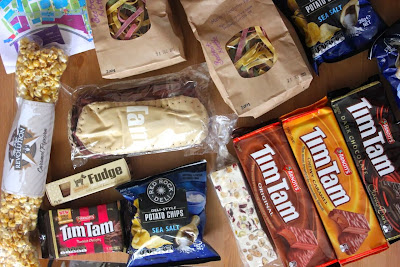 Overall, we had a really good time at the show.  I was pleased not to spend too much time at the funfair and although I spent more than I intended, quite a few of my purchases were the sort of food I would buy at a Farmers Market rather than just junkfood.  (I highly recommend the chocolate caramel Spotted Dog Fudge and thecranberry and pistachio Nougat Limar.)  Taking along some chopped up apple was great for healthy snacks.

We didn't see everything.  I would have liked to see more of the agricultural displays, the horses, flowers and vegetables, but the nature of the Show is that it is too big to see everything.  By 7pm we were tired and ready to leave.  We rushed out the gates to the train with a bucket of chips for Sylvia's dinner, a handful of showbags and a backpack of food purchases.