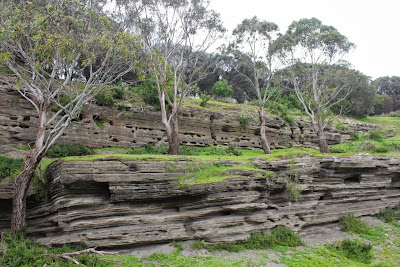 During our stay at Port Fairy last month, we made a trip to the Tower Hill State Game Reserve.  This is an inactive volcano, which takes in a huge fertile area of breathtakingly lovely bush, wildlife and nature walks.  I was sure that the rock in the top photo from within the crater was typical volcanic rock, but upon writing this I am now unsure.  I can tell you that I had to reassure Sylvia that the volcano was not about to erupt and if it did there would be some warning. 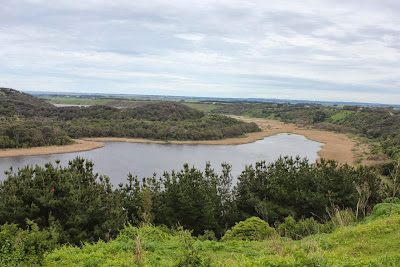 We drove there without any directions.  I was sure that the signs would tell us where to go.  (It was a holiday devoid of maps.  When we arrived in Port Fairy we suddenly realised we were just relying on our memory of our previous trip to find our holiday cottage.)  We were waylaid by a sign to Koroit.  I knew Tower Hill was near Koroit.  I didn't know the sign would send us on the scenic route.  Literally.  We stopped at many scenic viewpoints looking down on the crater.  Like above. 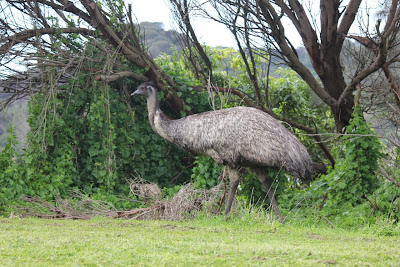 At one stop we saw this emu scratching about.  I suspect he was used to tourists taking his photo.  We also saw a paddock of emus at another stop. 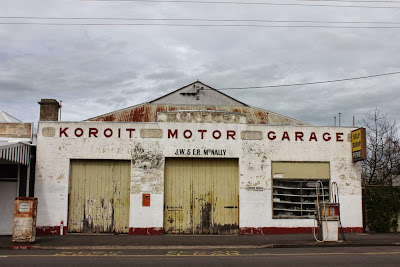 We found ourselves in the small town of Koroit.  (Well we had followed the sign.)  Then it wasn't immediately obvious how to drive into Tower Hill.  Since then I have discovered that Koroit is on the edge of Tower Hill but not a place you go through to get there necessarily.  We looked at the high street.  I was quite taken with another old fashioned garage. 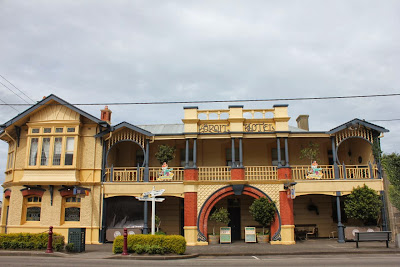 I also loved the art deco design of the Koroit Hotel.  It also had a fun signpost out the front with distances to places in Ireland, trading on the Irish heritage of the town.  We were too early to even think of lunch.  According to tourist information, there are quite a few places to eat here. 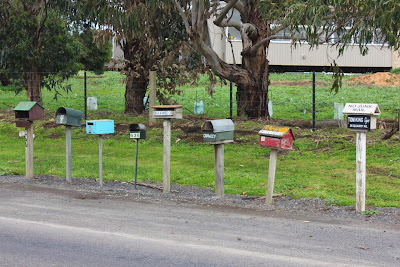 Recently I had an interview on radio with Kate Dyer of the Letterbox Project.  She and her husband drive around Australia photographing quirky letterboxes, mostly rural.  What a fun idea.  I love seeing interesting letterboxes on road trips.  The above sort of letterbox fascinates me too.  Lots of letterboxes clustered together because obviously the postie can't be bothered going to your mail box so you drive some way to collect your mail from the box. 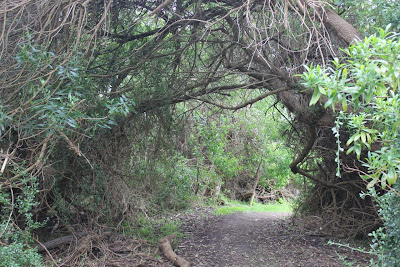 Finally we looked down from one of the lookouts and saw people and cars inside the crater.  If only we had stuck to the highway we would have gone in more directly.  We headed for the information centre and decided to walk the easy 2.6km Lava Tongue Boardwalk.  It was truly beautiful bush to walk through, and even better for seeing very few people on the track. 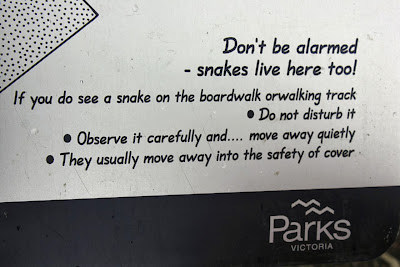 We were told we would see lots of wildlife at Tower Hill but no one mentioned snakes.  Fortunately we didn't see any.  We did see a kangaroo and a wallaby feeding its young joey.  Another walker pointed out the kangaroo from a distance and walked on.  When the kangaroo's head was down eating, it looked like a rock.  We stopped and watched. 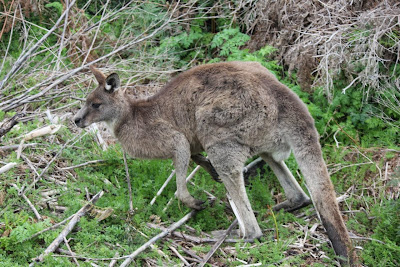 The kangaroo slowly bounded over to the grassy patch just by the boardwalk.  He grazed.  We gazed.  (And took photos.)  Such beautiful creatures.  Seemingly laidback and langorous yet with such strength in their legs.  Later we chatted to a local at Port Fairy who said there are so many kangaroos that they have moved some of the away. 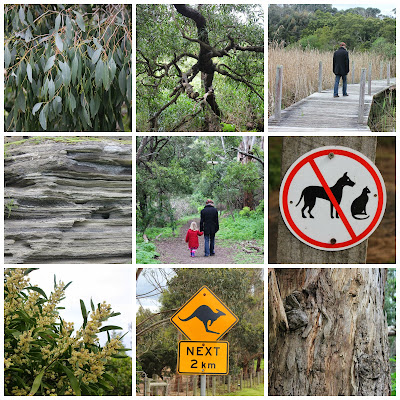 Sylvia is at an inquisitive age (4) where she is so interested in everything around her.  We took our time walking the track, stopping to look at leaves and flowers and trees. I suspect she is too young to appreciate the beauty of the scenery.  I am old enough to feel quite emotional and patriotic about such majesty. 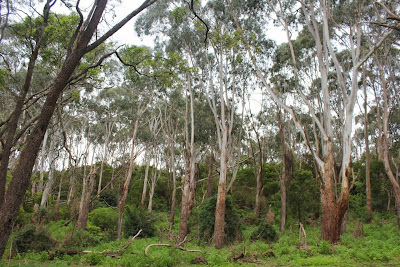 According to Wikipedia, this reserve was totally denuded after being used variously for cattle grazing, crops, tree felling, motor racing and even dumping garbage.  I am grateful to those who have spent decades nursing the crater back to health so we can enjoy its charms.  I hope we will be back.
Posted by Johanna GGG at 23:38