WSC Chocolate thumbprints and a stew 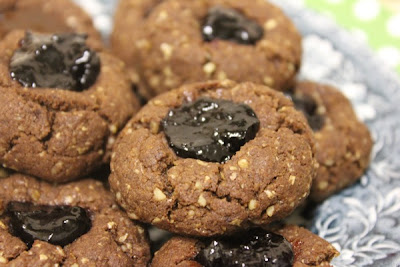 A challenge from Choclette and inspiration from Kari led us into the supermarket on the way home one evening last week.  We were seeking blackcurrant jam for thumbprint biscuits (or cookies).  I had already been to the supermarket earlier that day but I was too busy child-wrangling to remember the thing I had gone to buy.  I had expected one of the fancier labels to make blackcurrant jam.  All I could find was homebrand and plain old Cottees. 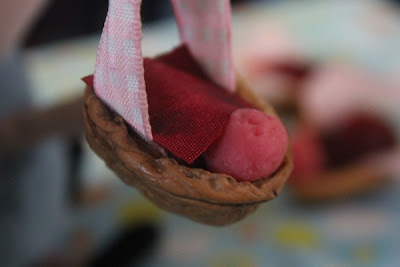 We came home with a jar of Cottees blackcurrant jam to freshly shelled walnuts and some walnut babies that we had made earlier in the afternoon.  (I didn't have any beads like the template I was following so we used playdough which worked ok unless a wee thumb was pressed into it.) 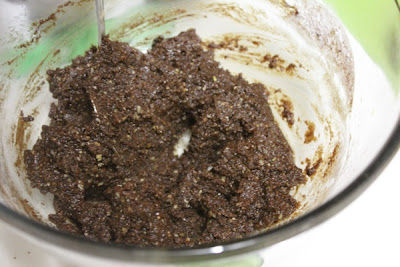 It was late by the time we started baking.  Fortunately I had fed Sylvia as much dinner as possible.  The mixture was so good that I considered eating it instead of making my own dinner.  Sylvia loved it so much that she went and found a spoon.  I think she intended to eat her body weight in the mixture.  I had to put a stop to that.  Though I was tempted to do the same thing myself!  We told each other many times that it was sooooooooo delicious. 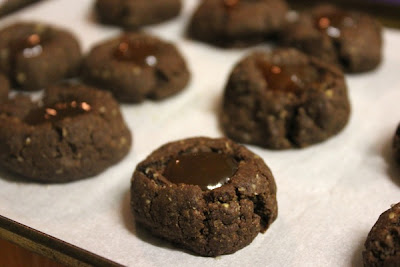 I love seeing where people get ideas.  Kari's recipe had evolved from two very different recipes.  I chose to make my biscuits a bit like the richer recipe she used by adding in some ground walnuts and chocolate.  I was also delighted to find an opportunity to use some walnut oil.  As Kari said, it was as good as brownies.  But more portable.  Think of a cross between a brownie and a jammy dodger.

The biscuits were also an ideal opportunity to create a blackcurrant recipe for We Should Cocoa.  Sylvia wanted apricot jam so I used apricot in half the bikkies and blackcurrant in the other half.  I used far less jam than Kari but I followed her lead in baking the biscuits, pressing a thumb (or in my case a half teaspoon measure because the biscuits were so hot), adding jam and returning to the oven for a few minutes.  The jam straight out of the oven seemed so liquid that I was sure it would never set.  Yet it did gel more once the biscuits cooled.  The only other time I have made thumbprint biscuits on my blog, I added the jam before baking, which seems more straightforward.  I wish I had the time and energy to experiment and tell you which way I recommend. 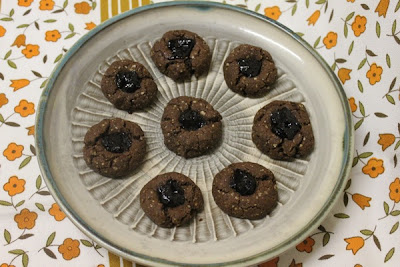 After tasting some mixture and one or two cooked biscuits (for research, of course) I really did need something savoury.  I intended to bake a Casserole of Lentils Rice and Sausage in the oven like Kalyn's but I ran out of puff and once it was cooked on the stovetop, I served it up.  My expectations were low.  E loved it and so did I.  I think it could do with more experiments but it was very good as it came.

Preheat oven to 180 C and line two oven trays. Finely grind walnuts. Break chocolate into small chunks in a microwave proof mixing bowl and gently melt in the microwave. Mix in remaining ingredients, except jam. Try not to eat the bowlful before you get it in the oven (it is that good). Roll mixture into balls about the size of a walnut. *Make a dent in each with your thumb and drop in about 1/4 tsp jam (I found this enough but add more if desired). Bake for about 12 minutes or until cooked on the outside. Cool on the trays and store in an airtight container.

* I cooked mine for 10 minutes and then made a depression with a half tsp measure because the biscuits were hot and then added jam and returned to the oven for 2-4 minutes. However, as discussed above, I think I would like to try putting the jam in before baking.

Gently cook onion in olive oil over a large frypan until very soft and caramelised. While you are cooking onion, grate carrots and add to onions as they cook. Now add in chopped sausages and keep cooking (I did wonder about cooking these sausages first but didn't have time). When onions and carrots are well cooked, add in remaining ingredients. Check seasoning. Bring to the boil and simmer for about 10-15 minutes to warm through and thicken the sauce.

On the stereo:
Music to watch girls go by: Various Artists
Posted by Johanna GGG at 19:50