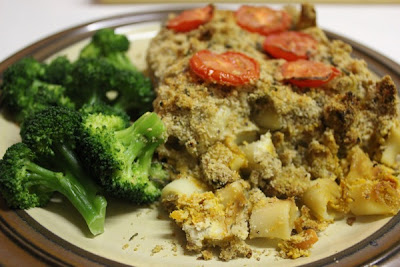 There are some recipes that impress as they come out of the oven and land on the dinner tables.  Others feel like a huge mistake but, by the time we finish them days later, I am sad to part with such deliciousness.  This pumpkin sage pasta break is one of the latter.  I take the blame for my ambivalence, which is a result of my tinkering with the recipe. 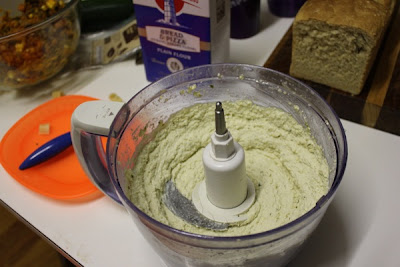 The great success of the bake was the tofu cashew ricotta.  I've made vegan dairy substitutes before with nuts and they are very rich.  I've made vegan dairy substitute before with tofu and they are lacking some of the substance of dairy.  Combining nuts and tofu meant it was light but with enough substance to stop it floating to the ceiling.  I even loved the little chunks of cashews that my food processor struggled to blend completely.  I only had pesto, not basil, so mine wasn't technically vegan but I tried a similar mix since without pesto and loved it just as much. 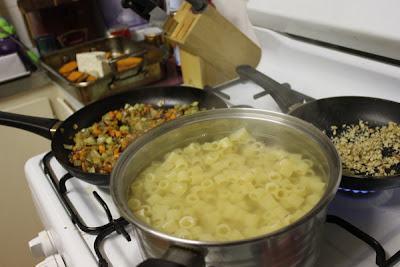 My big mistake was to substitute dried breadcrumbs for fresh ones.  It seemed a reasonable shortcut in a dish that required lots of components and saucepans.  It was also all I had on hand.  However, I underestimated just how much the dish relied on the breadcrumbs.  Too many dried breadcrumbs made it taste like a mouthful of sawdust.

I also found the bake incredibly savoury and regretted leaving out the sugar.  I added a few sliced tomatoes on top and squeezed lime juice over it the second night.  It was much improved.  Maybe more lemon juice in the mix and more tomatoes on top would address the savouriness, in future.  More testing the taste of the mixture would also help.  And a salad on the side and dollop of good chutney would have been great. 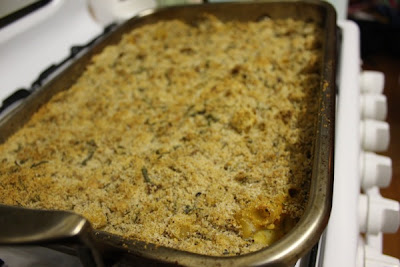 I made this pasta bake some weekends ago on a day of baking bread, making decorative paper dolls, supermarket shopping and watching the Mabo telemovie (very beautiful and sad).  Sylvia was in the mood for tipping out everything on the floor and not eating dinner.  At least the pumpkin could roast while I was at the supermarket (being directed by Sylvia to pick up any stray packets she spied on the floor)!

This pasta bake goes to Jacqueline of Tinned Tomatoes for Bookmarked Recipes, an event founded by Ruth's Kitchen Experiments.

- Toss pumpkin with 2 tbsp olive oil and seasoning in a roasting dish.  Roast at 180 C for 30 minutes or until soft.  Mash roughly with a fork.  Set aside.
- Cook pasta according to instructions on the packet.  Drain and set aside.
- Gently fry onions in 2 tbsp olive oil for about 30-40 minutes until soft and caramelly.  Stir frequently to check they aren't burning.  Set aside.  (I think I would add the sugar while frying onions next time.)
- Make cashew ricotta.  Blend cashews, lemon juice, olive oil and garlic in food processor.  Add tofu, pesto (or basil) and salt.  Blend again until mixture is smooth.  Set aside.
- Mix pumpkin, pasta, onions, ricotta, nutmeg, pepper and stock in a large mixing bowl (or in the baking tray if you don't have a large enough bowl).
- Make the crumb topping by frying the breadcrumbs with other ingredients in oil for 3-4 minutes until golden and crunchy (I skipped the frying because I only had dried breadcrumbs but I dry fried the walnuts and drizzled some oil through the mixture - see note*).
- Tip pasta and pumpkin mixture into a large baking tray (I used the same dish I had used to roast the pumpkin but can't remember if I washed it out or not!) and scatter with crumb topping.  Arrange sliced tomatoes on top if using.  Bake at 180 C for about 30 minutes (or in my oven about 40 minutes) or until crisp and golden brown on top (and if using tomatoes, until they are soft)


On the stereo:
Quiet Revolution - Various Artists
Posted by Johanna GGG at 21:23