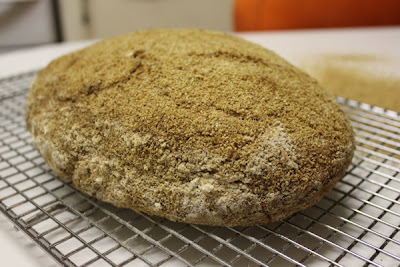 At the end of a hard day last week I bought myself some beer.  For baking bread of course.   Well I was passing the bottle shop because the car was at the mechanics.  It is the second time I have made this Irish No Knead bread.  I loved it both times.  I just wish so many of my photos of it hadn't disappeared into the ether. 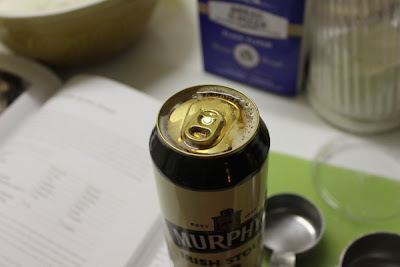 You see, I take too many photos.  And I am not good at deleting photos.  A couple of years ago, I had iPhoto clogging up my computer and thought I moved all my photos onto an external hard drive.  They have gone.  Like snow on the water.  Fortunately I have kept most of the good photos but I thought I had the whole lot to play with.

Recently, I have had problems with my computer being too full of photos so I thought I might try and delete more as I went.  In my enthusiasm, I have deleted a lovely photo of this bread from the weekend.  Argh!  I really am not good at deleting photos. 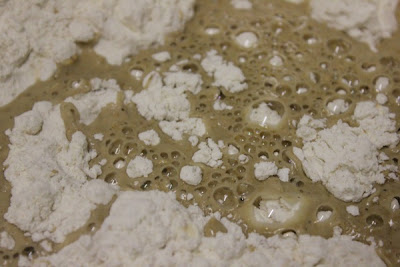 The first time I tried this recipe I made lots of notes about it seeming all wrong because it was much stiffer than Jim Lahey's original no-knead bread.  I got the measurements wrong and then forgot about the timer.  In my defence, I also made lots of obscure notes about nappies, baking florentines, and a disagreement over a crochet rug.  Yet my misgivings were unfounded.  The bread was brilliant and every bit as burnt-looking at Jim Lahey's.  I wish I had a picture to show you. 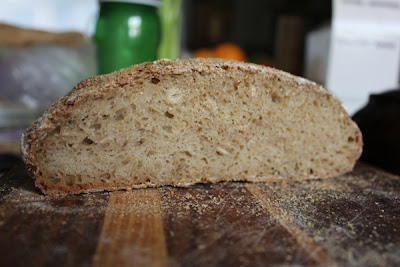 When I made the bread last weekend, I didn't have buttermilk so I used a mixture of yoghurt and soy milk and I found the dough to be slow to rise.  I left it on the second rise for 6 hours rather than 2 hours because I took Sylvia for a bike ride and then we hopped on a tram to go to a bookshop and ended up coming home laden with craft stuff, material scraps, vegies and lots of good books (The Wombles, Milly Molly Mandy and The Jolly Postman).  I also substituted oats for some of the wholemeal flour.  The recipe was forgiving yet again and the bread was delicious. This is a loaf that is a little healthier and a little fancier than regular bread.  What's not to want to photograph!

I am sending this to Susan for her weekly YeastSpotting event.

Previously on Green Gourmet Giraffe:
One year ago: CC Vegetarian Moussaka
Two years ago: Fish and chips – reflections of a vegetarian
Three years ago: From Disaster to Parfait
Four years ago: Pumpkin, PC Stories and a Roast
Five years ago: Dench bread and Dukkah: simple pleasures

Mix all ingredients, except extra flour and wheatgerm.  Knead or stir for about 30 seconds. 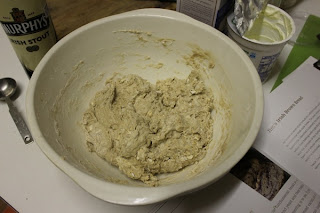 Cover with clingwrap and leave for 12-18 hours.  It should be slightly bubbly and risen. 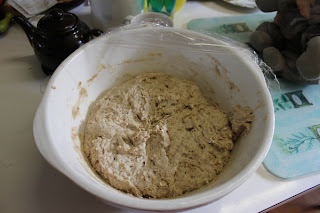 Using floured hands or scraper, tip dough onto a floured board and shape into a ball or loaf shape.  Scatter a tea towel flour or wheatgerm (or both - I used rather a lot as Sylvia helped with scattering and my last attempt at no knead bread still can be seen on the tea towel despite two washes so I was a little paranoid).  Place dough on the tea towel.  Scatter with more flour and/or wheatgerm and fold tea towel over the dough. 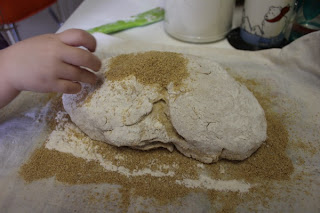 Leave dough to rise for 1-2 hours or until risen.  I let mine go a bit longer than this the first time but I let it rise for 6 hours on the weekend which I think may have been a bit too long. 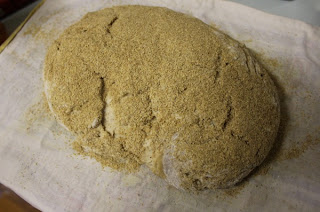 Thirty minutes before the dough is ready, place a lidded baking dish (cast iron or stoneware) in the oven and heat to 230 C.  After 30 minutes, take baking dish out of the oven and tip the dough in.  Shake about a little if needed to even out dough in the dish. 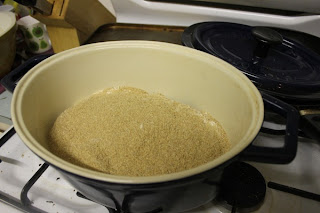 Bake for 30 minutes with the lid on and then another 15-30 minutes without lid on or until bread is a deep brown.  Cool on a wire rack. 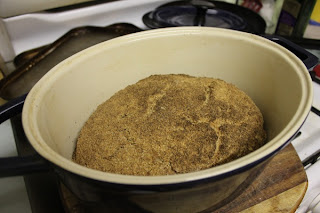 On the stereo:
Super Trouper – ABBA
Posted by Johanna GGG at 20:45