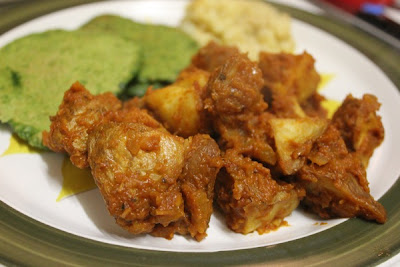 I wish I had heard of patatas bravas when I visited Spain.  I booked a trip there on a whim many years ago and was thoroughly miserable because I would have preferred to be at a Pulp gig in Edinburgh with E.  It didn't help that I didn't know a word of Spanish and couldn't work out what food was vegetarian.  I loved the fruit and veg markets on La Rambla but I just didn't understand tapas. 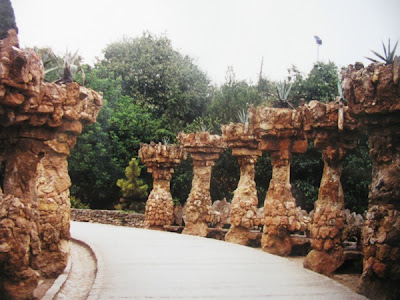 I saw some amazing sites in Spain and yet I just wasn't in the frame of mind for it.  Madrid left me cold, though it offered museums as well as churros and chocolate.  I loved the artwork of the Prado Museum and was moved by the full sized Guernica.  Toledo gave me a taste of the beautiful Moorish architecture.  Barcelona had a charming old town, the colourful La Ramblas and the Picasso Museum but most of all it had Gaudi. I just loved seeing his buildings but was even more astounded by the skillful blending of architecture and nature in Park Guell (above).  To this day, it is still among the most amazing gardens I have ever seen. 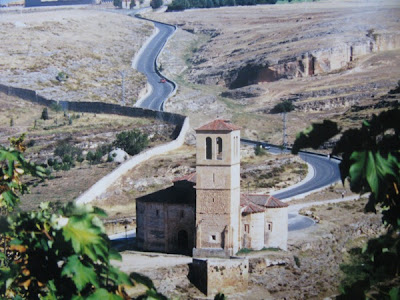 Finally I found I had to get out of the cities.  I went to Segovia on a whim and was calmed by the gorgeous small town.  I stayed in a pension where I found my landlady (who was far bigger than me) trying to take possession of my jeans away.  The huge Roman acquaduct inspired awe, whereas I loved the small scale of the Alcazar (which I heard inspired Walt Disney) and the Iglesia de la Vera Cruz (above), a church built by returning Crusaders.  I also discovered a vegetarian paella.  But I never tried tapas.  I just wasn't in the mood. 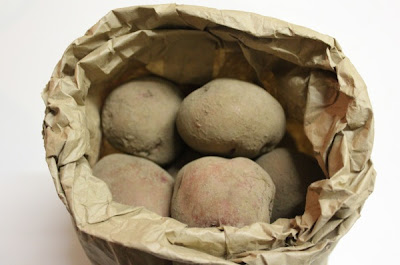 I'd like to think that if I went back to Spain I might enjoy spending time in tapas bars, eating patatas bravas.  Though I would probably find them rather spicy, if my experiences with them in restaurants since that trip is anything to go by.  The dish has been on my to-do list for some time now but it is only recently that I finally attempted it.  I'd like to think my photography might have improved by now but the photos of this final dish were quite unattractive.

My main problem, however, was trying to get a sense of the dish.  I had thought it was potatoes cooked in the oven in a tomato sauce but I couldn't find a recipe to fit my vision.  Finally I decided to try a recipe where I roasted the potatoes and tossed them in a tomato sauce.  This actually suited us because then I could give Sylvia some of the roast potatoes without the sauce. 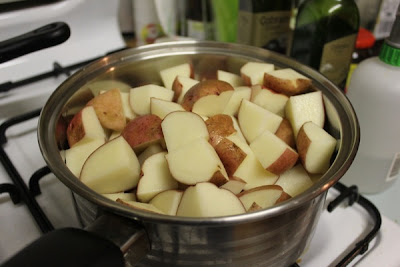 The real star of the dish were some lovely pontiac potatoes from Preston farmer's market.  I used whisky and water instead of white wine and didn't have any parsley.  My potatoes too ages to roast in my slow oven but they were wonderfully golden and crispy when done.  The sauce was quite spicy but pleasantly so.  We ate them with some spinach pancakes that E fried for me while I made the sauce.  The Patatas Bravas were even better the next day when the sauce had soaked in to the potatoes. 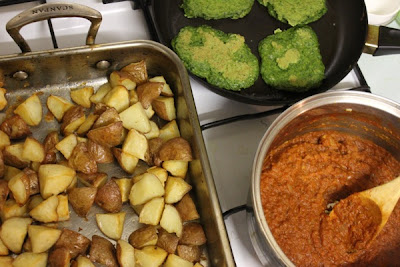 I could have done with a robust dish like this for dinner tonight.  I made a mediocre stew which didn't bring the cheer I needed.  We all have colds at the moment, work is crazy-busy, Sylvia's routine has gone a little off kilter, and Blogger just swallowed some of my work tonight.  I suspect that like my Spanish trip, life is good but I am just not in the frame of mind tonight to appreciate it.

Preheat oven.  The recipe directed to roast at 200 C but I found I had to heat my oven to 240 (it is slow).  Place potatoes and an inch or tow of water in a large saucepan.  Bring to the boil and simmer for about 5 minutes (they should only be starting to cook at this stage, not soft through).  Drain

Set out two roasting tins.  Toss half the potatoes with 1 and 1/2 tablespoons of oil and a pinch of french lavender salt (or regular salt) in each large roasting pan.  (Ideally I would heat the oil in the pan first but I didn't have time.) Roast potatoes for 40 minutes or until crisp and tender.  (Mine took 80 minutes.)

Meanwhile heat remaining 1 tablespoon of oil in a saucepan (I think I used the same once I cooked the potatoes in) and fry onions for about 5 minutes or until soft.  Add garlic, chilli paste and paprika and stir well for about 1 minute.  Add salt, whisky, water, tomatoes and oregano.  Bring to the boil and simmer approximately 20 minutes or until the sauce has thickened.  Season and puree (I used a hand held blender so mine wasn't totally smooth).  Return to heat to check it is heated through.  (I cooked mine an additional 20 minutes as I wanted to be sure it was thick enough).  Stir in parsley and toss sauce through roasted potatoes.

On the Stereo:
The Sound of Music (soundtrack)
Posted by Johanna GGG at 23:43