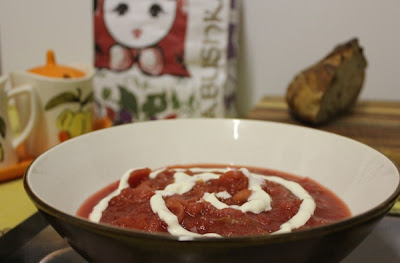 I made borscht years ago.  I liked it.  I wasn't in the mood to love it.  Recently I tried again, inspired by Lorraine's idea of blending most of the vegetables but keeping some aside until after blending.  I also liked Kari's idea of adding a can of beans to her barley soup.  I am pleased to say that I enjoyed it far more than my previous attempt. 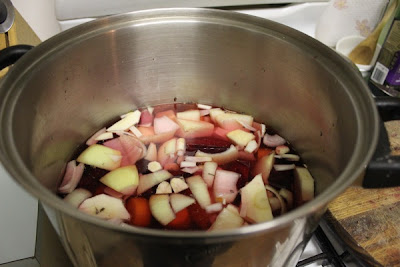 I made this borscht for dinner after a bad day when I needed something that wouldn't tax me too much.  It was easy to make and had plenty of leftovers.  Lorraine insists that you serve it with sour cream.  I had yoghurt in the fridge so I used this the first night.  It added lots of interesting texture and flavour to the soup.  As did the chunk of sourdough bread on the side.  Even so, E found it a tad too much vegetable.  Maybe the extra richness of sour cream would convince him. 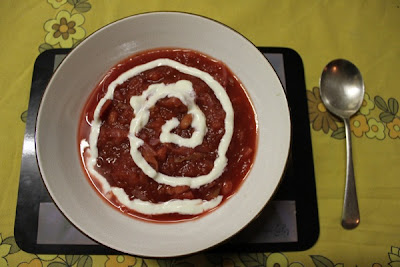 I had some fun photographing my dinner.  I thought I would try putting the corner of a ziplock bag to pipe yoghurt over the soup.  My swirls still were a little rough.  I have a long way to go yet but at least my pictures are better than in my last post on borscht.

I am sending this borscht to Deb of Kahaki Kitchen for her Souper Sundays event.

Borscht with Beans
Adapted from Not Quite Nigella
Serves about 6-8
Put onion, carrots, beetroot, parsnip, turnip, garlic water and salts into a large stockpot and bring to the boil.  Simmer gently for about 1 hour.  Add the passata and blend.  Now add cabbage, potatoes and beans.  Simmer for about 30 minutes.  Check seasoning.  Serve with yoghurt and dill.

On the stereo:
Made in Scotland Film Themes (freebie cd from The Scotsman newspaper)
Posted by Johanna GGG at 23:01