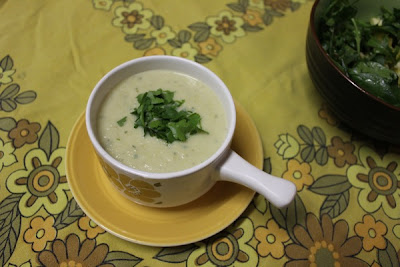 Today I have a celery and blue cheese soup to share with you.  It was good.  Very good.  But I don't have much to say about it, other than try it.  The blue cheese didn't overwhelm.  The amounts of celery and potato seemed flexible according to recipes I found on the web.  Even E was pleasantly surprised.  I ate mine with salad and E ate his with toast.  It would be quite festive if we celebrated Christmas in winter.  Nuff said.  What I really wanted to talk about was all the wonderful buildings we have seen today in Open House Melbourne. 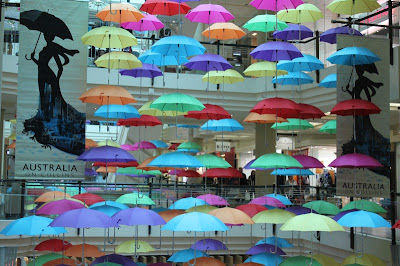 Open Doors Melbourne is when many of the buildings of interest around town are open to the public.  It required planning, sturdy walking shoes and a coat or brolly.  The weather wasn't kind to us today.  Nor was the public transport system (please stop moving tram stops).  Yet we managed to see four buildings with my dad before he headed off to watch the footy with my brother. 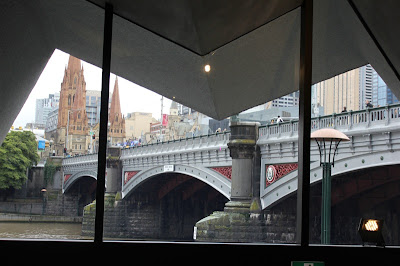 Our first building was Hamer Hall, which is one of Melbourne's major theatres and comprises part of the Arts Centre.  I remember doing a guided tour when it first opened many years ago so we just wandered aimlessly.  It has recently been refurbished.  It was too wet to photograph the outside.  I did take this picture of the new views towards Princess Bridge and St Paul's Cathedral. 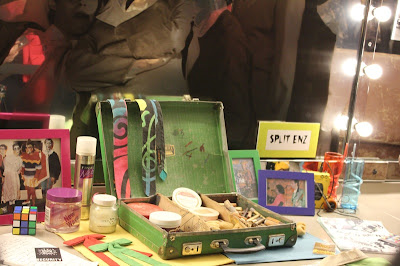 Hamer Hall is full of memories for me.  So I really enjoyed the display in one of the dressing rooms of some of the people who had been there.  Above is a representation of 1970s New Zealand band Split Enz (some of whom morphed into Crowded House).  They did like their make-up. 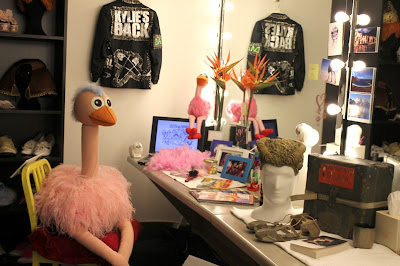 In the same dressing room was also Ossie Ostrich.  I grew up watching Hey Hey It's Saturday with Daryl Somers and Ossie Ostrich.  So this loveable puppet's face just seems as familiar as a childhood friend.  I'm glad I know where he has got to. 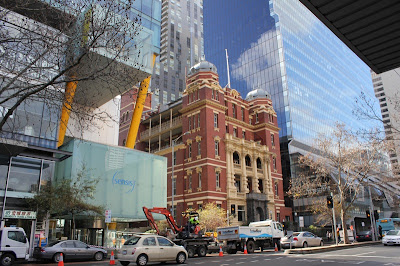 Next was lunch at Grill'd and then the Queen Victoria Women's Centre.  I took the above photo to show the grand old building in its modern surroundings.  Once upon a time it was part of a huge old redbrick hospital.  I vaguely remember that it seemed a really ugly building in my early student days when I passed it on the tram.  Yet now I feel sad at the old building that was mostly pulled down, and a little glad that at least some has been saved and treasured. 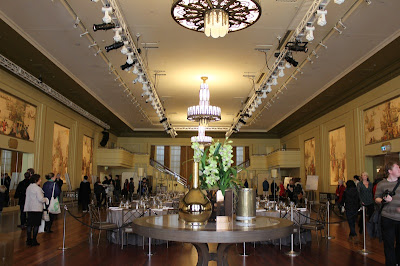 Then we walked down to Myer to visit the Mural Hall on the 6th floor.  Myer department store is a Melbourne institution that is changed almost beyond recognition.  We used to have a saying when someone was bold, that they had "more front than Myer".  Now that the Lonsdale St side of the store is sold and demolished with only some of the facade remaining, I am not sure what the saying means any more.  I miss the Myer that I once knew and loved. 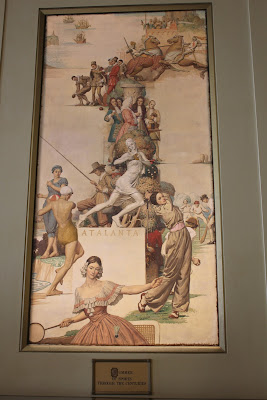 I am glad that I have seen the Mural Hall.  It is a grand art deco space.  The murals come from another time.  I thought, given the Olympic opening last night, that it would be topical to show you the Mural called "The Summer of Sports through the Centuries".  It is so different from today's representations of sport.  I prefer these quieter, more elegant images. 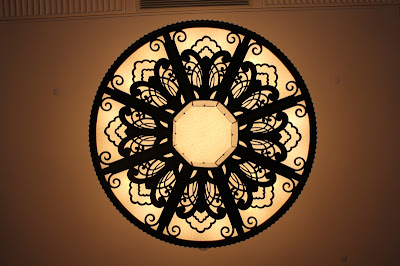 Many of the buildings we saw had lovely period features.  My favourite detail photo is the one of a light in the Mural Hall.  It is taken from directly beneath a light.  Isn't it beautiful? 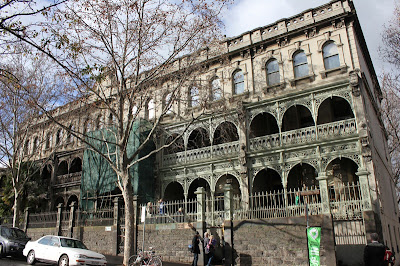 Our last visit was to Tasma Terrace.  I take a personal interest in this building.  When I first moved into a share house in Melbourne, we found old newspapers in a cupboard dating back a decade or two.  One of the stories was about this grand old row of terrace houses being due for demolition.  I was so relieved to find it had been saved. 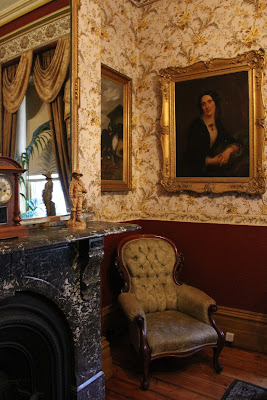 The building is now owned by the National Trust.  The front room has been restored to its former glory, as you can see above.  Today it was filled by a large dining table.  The last time we were here was as part of the audience in a wonderful mock history tour of Melbourne during the Commonwealth Games a few years back.  I was very glad to return and hope it wont be my last visit.

I am sending this soup to Deb of Kahaki Kitchen for her Souper Sundays event.

Heat olive oil in a large saucepan or stockpot and fry onion, celery, potatoes and garlic (I added them as I chopped them) for about 10 minutes or until vegetables are softened.  Add white wine, stock, salt, and silken tofu.  Bring to the boil and simmer for about 30 minutes or until vegetables collapse at the sight of a fork.  Add parsley, blue cheese and black pepper.  Blend.  Check seasoning and adjust to taste.  Serve hot or warm, garnished with sprigs of parsley.

On the Stereo:
Moondawn: Klaus Schulze
Posted by Johanna GGG at 23:45