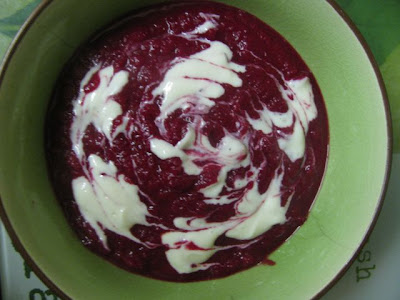 When Ricki and Kim asked for rhubarb dishes for their Sweet and Savoury Challenge this month, I was excited at the possibilities. We have been eating lots of rhubarb crumble lately but it is great for so much more. So I went through the soup, sweet crumble, soup, savoury crumble ideas until I decided upon a beetroot and rhubarb soup.

What narrowed it down in the end was my energy levels, my pantry and the limitations of making the dish both vegan, gluten free and free of refined sugars. Part of the challenge is to make food for people on restricted diets. This week I actually made one of my best rhubarb crumbles to date. It was so good that I might have sent this in to the event but I couldn’t find any agave nectar and ended up just using brown sugar. But I will tell you that what made it amazing was the quince poaching liquid that I used to stew the rhubarb. 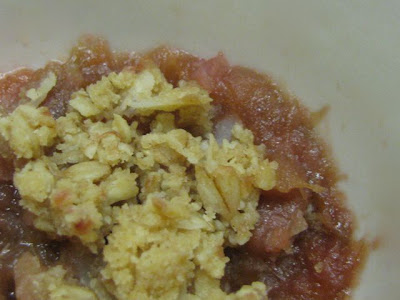 I made both a noodle stirfry and rhubarb crumble with custard when my dad visited, and was pleased that dinner was finished by 7.30pm so he could get a train home. The noodles weren’t great but we all loved the dessert. After Sylvia just picked at the tofu and peas, I watched her gobble up the rhubarb and apple crumble. Look at her eat her vegies, I said to E and dad.

Well we all know that rhubarb is a vegie, don’t we? Anyone who has been brave or foolish enough to taste rhubarb with no sugar will know that it is unbearably tart and needs a generous amount of sweetening to taste like a fruit. Hence I decided to look at savoury recipes. I have done it before with a rhubarb dipping sauce that was lovely so I had some confidence it could work. 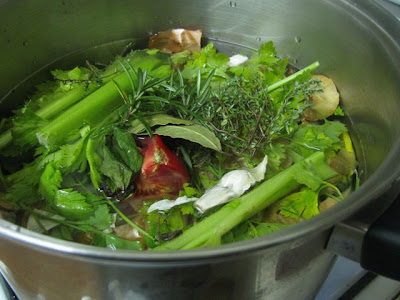 I remembered a simple but alluring beetroot and rhubarb soup that Lysy made almost a year ago. But I wanted more vegetables. A quick search found that Charlotte and Jacqueline of A Whole Afternoon had tried a beetroot and rhubarb soup with sweet potato, cabbage, carrots and orange. So I decided to make a soup with some winter vegetables, because rhubarb comes into season here in the cold. 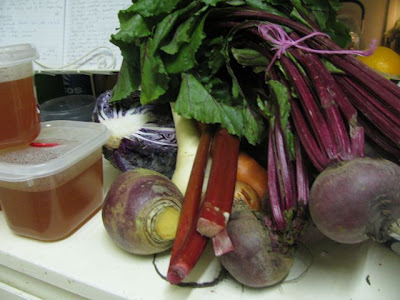 A trip to the market found me buying up red cabbage, carrots, parsnip, beetroot and turnip (swede). I made a home made vegetable stock on Thursday night (including a few trimmings of rhubarb in the stock - but not the leaves which are poisonous!). I had also found Japanese silken tofu and made Carla’s vegan sour cream cheese. I was so unusually organized that I started cooking the vegetables for the soup. 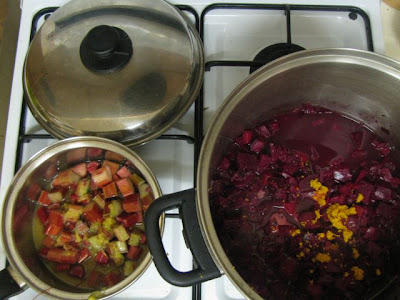 I was so tired the next night that I was glad that I didn’t need to do much to get dinner together. I followed the idea of adding orange and rhubarb at the end. What I found was that the vegetable mixture had been just the right amount of seasoning but once I added the ‘fruit’ it lost the balance. I just couldn’t be certain if I liked the slight tartness. E thought there was a bit much orange and I then wondered if the orange zest was too intense. I had thought that perhaps it needed more seasoning.

Tonight we ate the rest of the soup with some zucchini slice on the side. I enjoyed the flavours though still felt that the fruitiness was quite prominent. (As an aside why do we call food ‘fruity’ but not ‘vegetabley’?) But one advantage was that at the end of the meal, I felt like I had eaten a good serve of fruit and veg and didn’t have much desire for dessert. I am excited by the idea of thinking of the sour flavours of rhubarb in savoury dishes and hope to experiment more. 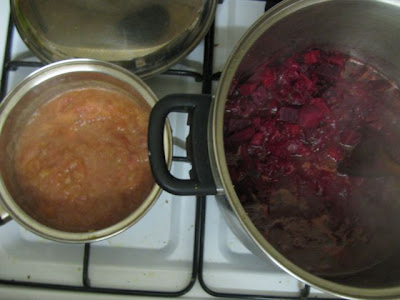 Here are a few interesting savoury rhubarb recipes I have seen online (and I am sure that Ricki and Kim will post some good ones in the SOS Challenge round up):

Lentil and Rhubarb Stew with Indian Spices – the taste space

Beetroot and Rhubarb Soup
Adapted from A Whole Afternoon
serves 4

Heat oil in stockpot and fry onions for about 5 minutes. Trim, peel and chop beetroot, turnip, carrot, parsnip, cabbage in that order adding to the pot as you do them. Add the mustard powder and stock. Bring to the boil and then simmer for about 30 minutes. I then left mine overnight but otherwise you may need to simmer a little longer so the vegetables are soft.

Zest and juice orange. Set zest aside and cook rhubarb in juice until soft. About 5 min) Stir rhubarb and zest into soup. Blend to a puree. Serve with sour cream if desired (see recipe for vegan recipe below).

Blend all ingredients . I used a hand held blender.

On the Stereo:
Ballads: Moody Blues