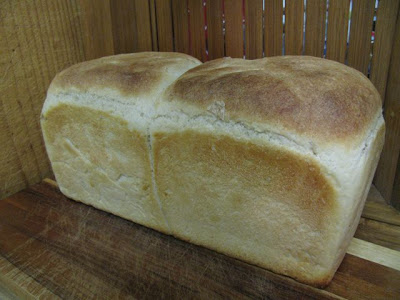 I have recently raved about Dan Lepard’s and Jim Lahey’s slower methods for baking bread. However, there is one more traditional bread recipe that I have made a few times now which makes excellent soft but substantial white bread. It is Nigella Lawson’s Potato Bread. 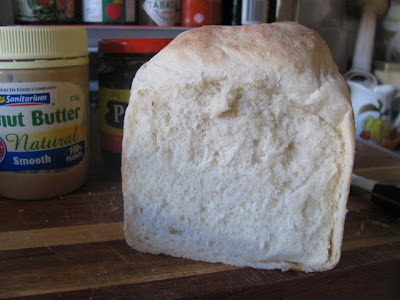 Growing up on a meat and three veg diet, I ate a lot of mashed potato. Some days I wish I made it more just so I could have leftover mashed potato for baking. Sometimes I make it just for baking because it makes baked goods taste better. I love baking with mashed potato. It binds and moistens.

Our foremothers knew this and would use potatoes in bread. I found a great blog summary of Elizabeth David’s writing on the history of potatoes in bread the 19th Century. Apparently potaotes were used to bulk up bread during a grain shortage and to help ferment the yeast. Nigella knows its importance and recommends using potato water in any loaf of bread in place of plain water but she goes further and includes a recipe for bread made with mashed potato. 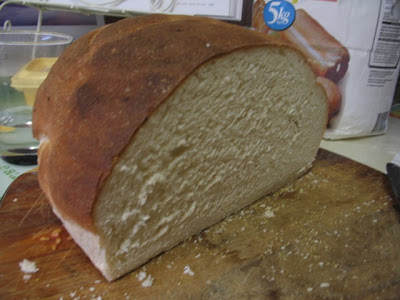 I found a photo of this potato bread that I made just before I started blogging (above). It was obviously taken before I discovered the close up button on my camera and learned how to take photos with food in focus. It tasted good. My more recent photos of this potato bread reflect the taste far more successfully.

Since making my first loaf of potato bread quite a few years ago, I have learned a lot about baking with yeast. I credit some of this to Dan Leapard and Jim Lahey, some to experience and some to a recent Masterchef Masterclass. I have learned that salt retards growth as well as give flavour, slow rising gives better flavour and the water doesn’t have to be lukewarm. 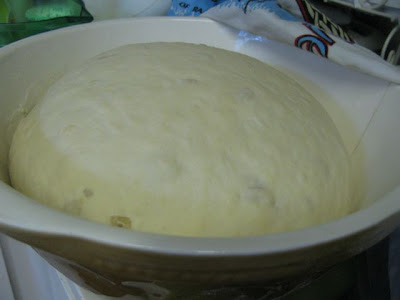 What amazed me was the advice in the Masterchef masterclass saying that the dough should be treated gently. It seems some people treat it to delicate folding rather than treating it like a punching bag. I was glad to see Nigella recommend that you give the dough a good thwack with your fist after the first rise to let the air out of the dough and any frustrations out of your system..

My one problem with the recipe when I made it earlier this year was that I found it very salty. The next time I made it, I reduced the salt from a tablespoon to 2 teaspoons and preferred it less salty. Less salt didn’t seem to make it rise quicker. Mine took 2 hours till it seemed risen enough, rather than the hour that Nigella suggested. 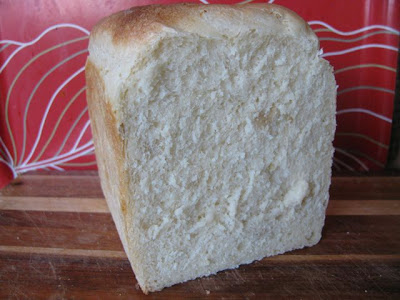 I found that when I used leftover mashed potatoes that didn’t quite make up the 300g specified in the recipe, I needed less flour but the recipe worked fine. I also used potatoes mashed with their skins on and again there was no problem if you don’t mind seeing the grey flecks of skin in the finished loaf (see in above photo). I also used buttermilk instead of yoghurt and it was a fine substitute. 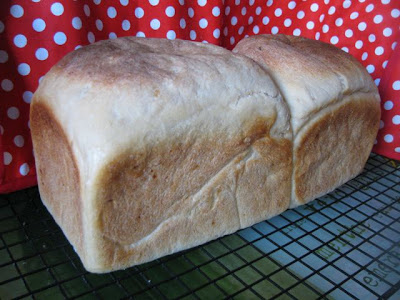 I love baking this bread in a traditional loaf tin. It feels like an insight into the reason that white bread was popular. This is light but satisfying with a wonderful chewy crust. None of your supermarket sawdust that often passes for white bread. It feels like the sort of loaf that would come in a paper bag and be delivered by a baker in a horse drawn cart 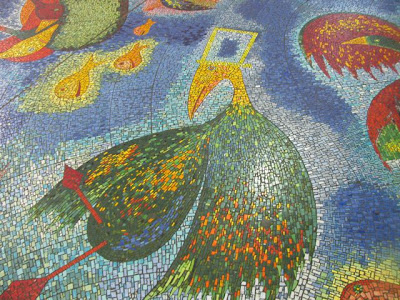 The last time I made this bread was the day before E left for Scotland in May. It felt good to give him some substantial food before stepping onto a plane to eat food out of little plastic boxes. When he arrived it was about 12 C in Scotland and 20 C in Melbourne despite it being late autumn here and late spring there. Before it got warmer there the rain turned to sleet.

Though I have lived in Edinburgh a few years, I still get amazed at how cold it is. No wonder E thinks a home should have central heating on all year round. But when it comes to bread baking, it raises the question of what is meant when a recipe calls for bread to rise at room temperature. Whatever your climate, I high recommend you try this bread. It is proof that the simple things in life are often the best. I am sending this to Susan for YeastSpotting, her weekly round up of yeasty baking around the blogosphere. 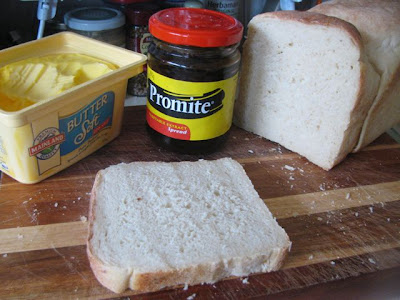 Mash the potatoes and mix in about 600g flour, salt and yeast. Add yoghurt and water slowly. Tip out the shaggy dough onto a floured surface and knead for about 12 minutes, adding in flour as kneaded. As much as 200g extra might be needed, according to Nigella. She also notes that the dough is damper and heavier than regular white bread but I found it will become nice and smooth.

Place dough in large greased mixing bowl, cover with cling wrap and set aside for about an hour to double in size. Nigella also says it can be set aside overnight in a cold place – I guess this means in the fridge or on the windowsill in winter! NB: It took me 2 hours at room temperature in autumn.

When the dough is risen, punch it down and knead for about a minute. Form into a loaf in your preferred shape – I have shaped this into a round loaf on a baking tray and into a regular squared bread loaf in a bread tin – both lightly greased. Lightly cover with a teatowel and leave to rise for about 30 minutes until almost doubled in size. NB: It took me 40 minutes.

While bread is rising, preheat oven to 220 C. Place risen loaf (no glaze required) in oven for about 20 minutes and then turn temperature down to 190 C and bake another 10 minutes. I have found that when baking in a bread tin, I tip it out towards the end of cooking, place it back in the tin upside down to make sure the bottom is a nice golden brown, even if the top looks slightly squished.