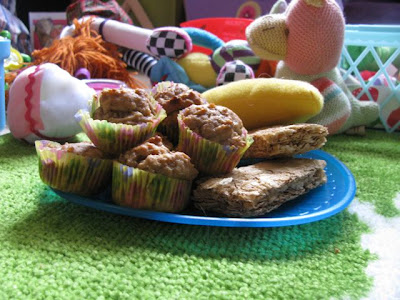 On my visit to the library on the weekend, I borrowed a book called Feeding Fussy Eaters (by Julie Maree Wood with Antonia Kidman). Oh no, I thought, has it come to this that Sylvia is officially a fussy eater! I was comforted by the paragraph saying that they wouldn't bother even giving advice on eating broccoli because not even many adults like it. Well we all love broccoli in this household, including Sylvia. As I am posting a recipe she loved for banana weetbix muffins, I thought it was a good opportunity for an update on Sylvia. 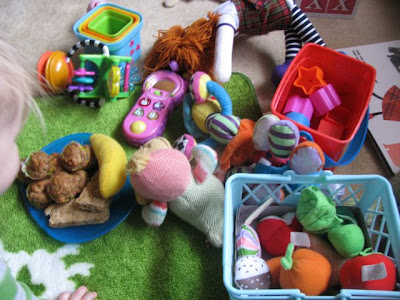 Here is a glimpse of Sylvia with the muffins and her toys. I couldn't take many photos of the muffins with her toys as she was too eager to grab a muffin and tuck in. She is moving at some rate these days: walking, climbing and even running when she sees me come to pick her up from child care. She brings me a book and climbs on my knee to listen to me read it to her. She loves to dig in my pot plants, pull the clothes off the clothes horse where they are drying in front of the heater, put her green woollen hat on her head - and take it off again, hang things on her trolley and when I gave her a toothbrush to do her teeth last week she used it to brush her hair. Her least favourite thing is the vacuum cleaner, which makes her cry. That shows wisdom in someone so young!

She loves to stand in the middle of the room and throw her head back and laugh like a crazy woman. It always makes me laugh, except if I want her to go to sleep. We usually disagree on when she should go to sleep. 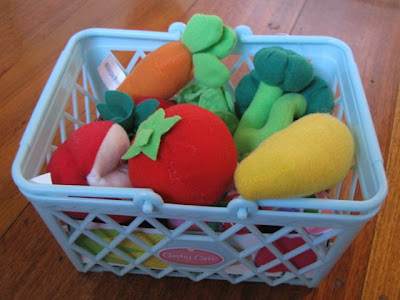 We often disagree on what she should eat as well. Here is a new toy shopping basket of toy fruit and veg. She loves them more than her food. Take her her toy pumpkin. She loves it. But she wont eat the real thing. Oh the irony! I thought her eating was on a J curve where she was including more and more in her diet but now I think it was the bell curve where she tried lots of foods and now is rejecting more and more foods. 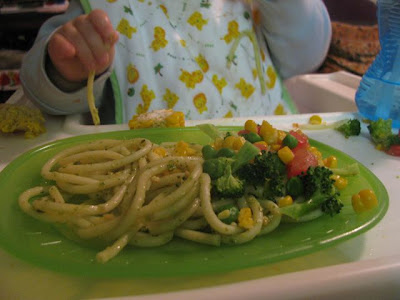 I have been trying some of my favourite recipes on her lately. She has refused most of the red lentil loaf (too salty?), mexicale pie (she was interested in the kidney beans), and macaroni cheese (she didn't fall for the hidden mashed pumpkin). Well, she doesn't refuse them outright. After a while, she will eat a few mouthfuls and I think I have made a breakthrough and then she refuses them again. There are lots of meal times with lips clamped shut. She has also learnt this is a great time to shake her head to signal 'no'.

I am just grateful she eats broccoli. For now! She also likes tomato, corn, roast potatoes, roast beetroot, pasta with pesto, chickpeas, tofu, fruit, gingerbread, sultanas, tinned baked beans, cheese on toast and scrambled eggs with tomato, cheese and pesto. Looking at this list, it isn't terrible, but she can even refuse to eat these if the whim takes her. Maybe she just doesn't have a huge appetite, though she doesn't seem to eat lots of food. I think I need to try some more noodle dishes and curries, which have gone down well with her. 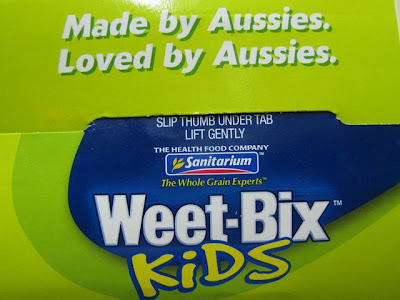 One reason I spend my days trying to get her to eat new foods is that I want to make sure she gets the right nutrients. It is disappointing to see just how much junk is in some food but I have become a fan of weet bix for kids. (See top photo if you are unfamiliar with the name as I know they go by different names in other countries.) They are 96% whole grain wheat and then some sugar and nutritional supplements. I bought them for her to eat as cereal but Sylvia wasn't keen on them though she occasionally eats them dry. I understand. When I was young I loved weet bix in winter with warm milk and brown sugar. But now the idea of eating them soggy with milk is not at all appealing.

A lovely person did a search for recipes with weet bix that turned up in my stats and inspired me to search for weet bix recipes. My mum had a few recipes with boxed cereal in it when I was young so I found the idea comforting and the added iron, calcium etc made it seem a good way for Sylvia to get some nutrients into her. I found a recipe for Banana Weetbix Choc Chip muffins. 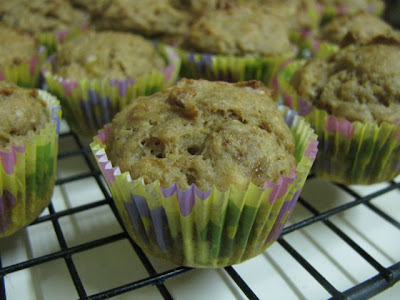 I left out the choc chips and added a little molasses and spices to give it a gingerbread flavour, something that Sylvia seems to love. The recipe is not overly sweet, and most of the sweetness comes from the banana. They also have a malty flavour that make me nostalgic for childhood breakfasts. The muffins were great for my lunchbox and a big hit with Sylvia. She particularly loves being able to choose her own muffin from the tin. Little Miss Independent! 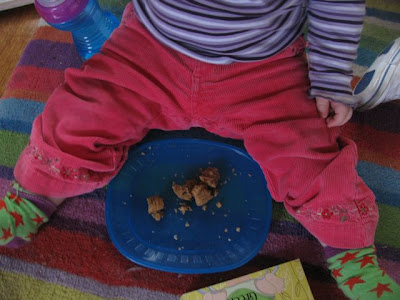 You can see that she doesn't always eat in her high chair. Meals are usually eaten in her high chair but she is so slow that I have started to give her some snacks when on the ground to avoid her spending the day in the high chair. She has a little part of the tv table that has become her feed station. 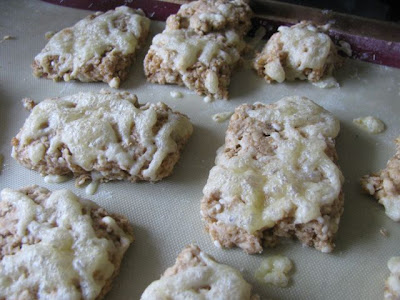 I am now keen to try other weet bix recipes. I tried another one yesterday from the Feeding Fussy Eaters book. It was a fibre laden cheese biscuit. The recipe said it was low on salt but I didn't understand why it needed some much sugar. Sylvia quite likes it so I have included the recipe below as a work in progress. I hope to try it again. As well as being too sweet, they are incredibly crumbly and it means she had to eat these in the high chair to catch all the crumbs. But they seem to be a nutritious snack.

To help me try more weetbix recipes, here is a list of some links to recipes to try:

Banana Weetbix Muffins
Adapted from recipe by Artarmon Public School in Delicious Feb 2003, via taste.com.au
Make 12 regular muffins (I made 45 mini muffins)
Preheat oven to 180°C. Line a 12 hole muffin pan with papers or grease or use silicone. (Or use mini muffin pans if preferred.)

Grease a 12-hole muffin pan. Mix mashed bananas, crumbled weetbix and milk in a large to medium mixing bowl. Set aside for about 10 minutes.

When weetbix are softened, stir sugar, margarine and eggs in with the banana mixture. Then add flours and spices and stir until just combined.

Spoon into muffin pan and bake for 25 minutes until a skewer inserted into the centre comes out clean.

High Fibre Cheese Biscuits (work in progress)
Adapted from Feeding Fussy Kids
says it should make 20 but I think I made 12-15
Place dry ingredients in a large bowl and rub in the nuttalex or butter. The recipe says to add 2 tbsp milk to bring the dough together but I found mine came into a ball without any additional liquid so I just gave it a token 1 tsp but wonder if I should have added more as the resulting biscuits were very crumbly.

Roll out to about 1cm thickness on a floured board. Sprinkle with grated cheese and use rolling pin to press them into dough. Cut into small squares and transfer to a greased tray (I used my silicone mats to line my tray). Bake at 180 for 12-18 minutes. Cool on tray.

On the Stereo:
The Forsyte Saga: Music from the tv series composed by Geoffrey Burgon
Posted by Johanna GGG at 12:25