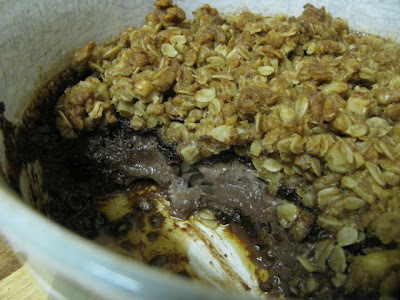 I was taken with a recipe for Baked Chocolate Custard with Pecan Crumble in a recently purchased magazine. It was unlike my usual desserts, being full of eggs and milk but I was tempted by the promise of chocolate with a smattering of prunes. 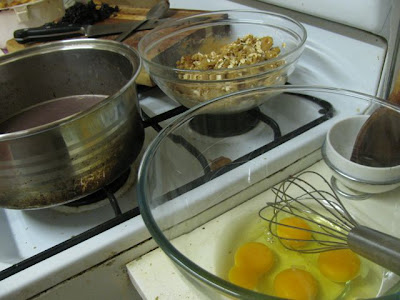 When I first tasted it, I was disappointed. It was not as creamy as I expected and the prunes didn’t give the lift I expected. On the other hand, it was so rich that it made me wonder at how the magazine could suggest it would serve 4 people. A small serving was more than enough. There were a lot of servings in it. Which was just as well because it got better for sitting overnight and even better after a few days. E was poorly when I first made it but he had recovered after a few nights and was quite impressed. We ate it without embellishments. However in the future I would like to serve it with some fruit (maybe a winter compote) and even maybe some ice cream or other creamy accompaniment. It was very rich but I did find myself occasionally sneaking a spoonful out of the fridge over the days it sat there.

In fact I was congratulating myself on making a baked custard for the first time when I realised that quiches and bread and butter puddings are mostly custard. However, I usually draw the line at 4 eggs. It is too many for me but I felt uncertain enough with this recipe to follow it closely. I liked the idea of custard and crumble but if I tried such a dish again I would be more tempted to make the vegan pumpkin and chocolate custard from this bread pudding. 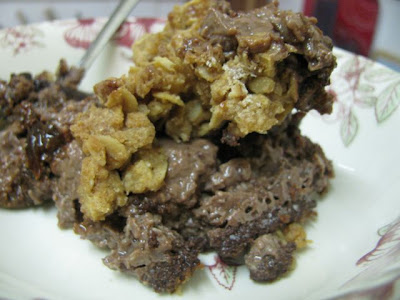 Meanwhile I have a few links to people who might appreciate this pudding: 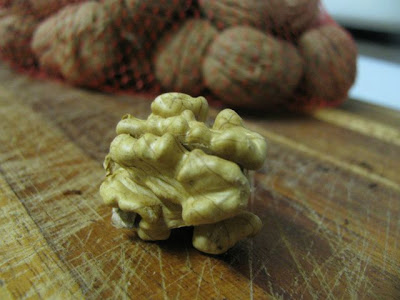 Chocolate Custard Crumble
From Recipes Plus May 2010
serves 6-8

Preheat oven to 160 C. Grease a medium ovenproof dish (the recipe said a shallow 6 cup dish but I am not sure what size that is). Place dish in a large roasting pan. Sprinkle prunes over the base of the dish.

Place flour and sugar into a medium bowl. Rub the butter in with your fingertips. Add rolled oats, walnuts and cinnamon and rub in gently. Set crumble aside.

Heat milk in a medium saucepan. Once it comes to the boil, remove from the heat. Add chocolate and stir until it melts into the milk.

Whisk eggs, sugar and golden syrup in a large heatproof bowl. The recipe says to whisk till thick and creamy but I whisked for ages till I got a sore arm and yet it was still more frothy than creamy. (My mum said that eggs just need a bit of beating for custard - if I really wanted it thick and creamy I would use electric beaters but it seemed ok despite this). Gradually whisk in chocolate milk. Pour milk and egg mixture into prepared dish. 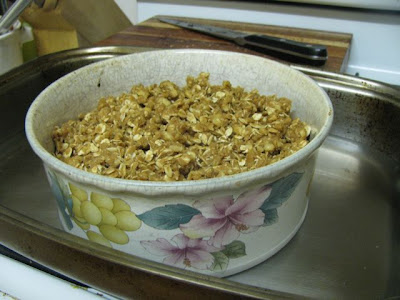 Pour boiling water into roasting pan up to approximately halfway up the edge of the dish (actually I didn't have anywhere near halfway up the dish). Place roasting pan in oven and bake for 30-45 minutes until custard is just set. I think I left mine in for 45 minutes as I was worried about the custard not being set.

Sprinkle crumble over top of custard and then return dish in roasting pan to the oven til crumble is golden brown. I think I did this for 30 minutes rather than the 15-20 minutes in the recipe and even turned up the heat towards the end of this. Serve warm or make it the day before serving as it is even better on the second and third day.

The best of Rolf Harris