The Comforts of Rice Pudding 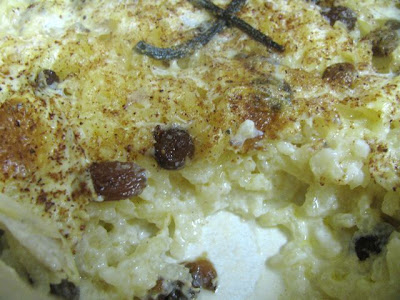 "Both the heart and the stomach thrill to … an old fashioned rice pudding that makes magic of just milk, rice and sugar", wrote Terry Durack in the The Age Good Weekend Magazine this weekend just passed.

It is a lovely piece that articulates the Australian attitudes to puddings. They are not as the English seem to think, “anything served at the tail end of the meal”. Puddings are sweet, sticky, stodgy, steamy mounds of nostalgia. They are warm with dense, cake-like crumb, plump dried fruit, sweet stewed fruit and never complete without a sauce or cream of some sort. This is comfort food as mum made it. 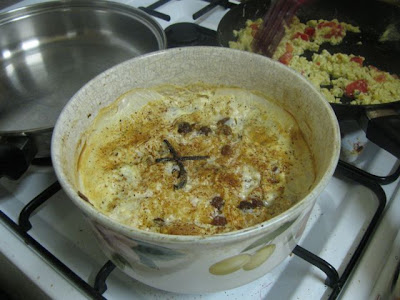 I made rice pudding on Sunday night. E has been hankering after it because he remembers his mum making it for him as a child. I asked his sister HH about it and she said yes she remembered it cooking such a long time that she would smell it when she got home from school. Like my mum’s, it was filled with creamy sweet clumpy rice and plump sultanas under a brown skin.

I was never crazy about my mum’s rice pudding. But making just the sort of pudding we had as children filled me with nostalgia and it tasted just so good. It made me think of the 9 of us seated around the big wooden table with our spoons by us, watching my mother with a stack of dessert bowls and a large serving spoon ready to dig into the a steaming dish of rice pudding. She gave each bowl of rice pudding a splash of milk and a sprinkle of sugar before passing it out to us. I remember our old yellow plastic sugar bowl but I can’t remember if she put the milk in a jug.

I’m not the only one to find it evocative. E loved it. I asked if it was like his mum’s and he said his mum’s had even less liquid but was very similar. (Whereas I thought my mum’s was a little more creamy.) We expected Sylvia to eat it because she loves rice and sweet food but she just picked out the sultanas. Maybe one day she will learn to love it. 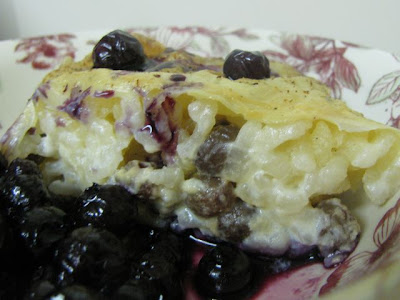 Despite the rice pudding being a trip down memory lane, I was aware that I have changed and I felt that it needed stewed fruit after seeing Nigel’s rice pudding with poached damsons. Being winter here, stewed apple and/or rhubarb seemed quite fitting but I had blueberries in the freezer and made a quick sauce with them. 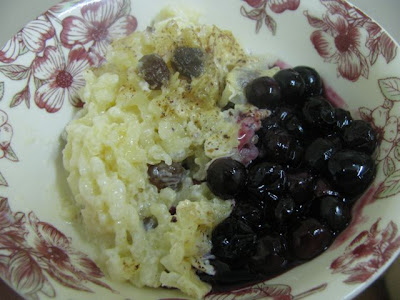 Eating such family dishes bring about such comfort through filling the tummy and nurturing the soul. They are not just about our childhoods but they connect us to our foremothers. My mum learned a lot of her cooking from her own mother. My grandmother is very much in my thoughts at the moment after visiting her in hospital yesterday. She would be proud of my rice pudding.

Mix milk, rice and sugar in a greased medium baking dish. Add vanilla essence if using. If using a vanilla bean, slice it in half and scrape the insides into the milk mixture. Mix and then place the bean pods on top of the mixture. Dot with butter. Bake at 160 C (or 170 C if like me you have a slow old oven) for about 1 hour. Remove from oven and grate nutmeg over the top. Return to the oven for another 20 minutes. It is ready when there is a slightly browned skin on top and then pudding feels firm to touch because the rice has absorbed most of the milk.

When the pudding is cooked, let sit aside and prepare the blueberry sauce by gently bringing all ingredients to the boil in a saucepan. (If you add cornflour add just a little liquid to dissolve it before adding to mixture so it doesn’t get lumpy.) Serve warm rice pudding with warm blueberry sauce.

On the stereo:
Schattenkrieger: Schattenspiel
Posted by Johanna GGG at 20:30