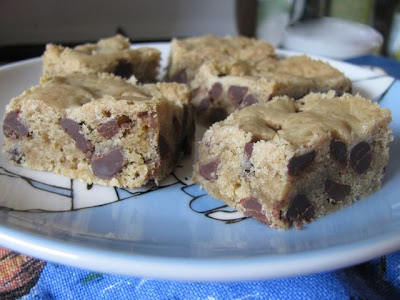 When I read that Susan of The Well Seasoned Cook was hosting the Sugar High Friday event (created by Jennifer, The Domestic Goddess) with a theme of cookie bars, I saw a window of opportunity open. I grew up with 'slices' not tray bakes or bars but have embraced choc chip cookies with a passion. I was interested to see how they would work as a ‘bar’.

I searched the internet for a recipe that would make bars that tasted just as good as choc chip cookies. I found a recipe for Thick and Chewy Chocolate Chip Bars on My Kitchen Café which had come from Cook’s Illustrated and been tried by a few other bloggers. 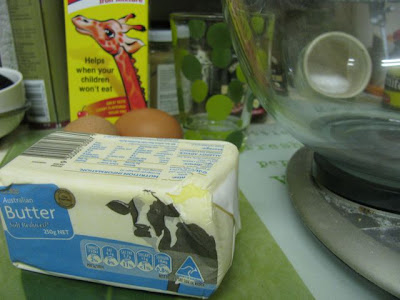 I even had a need for them. I had decided I would take some food when I visited my brother’s new baby Ashton because I had appreciated those who had brought me food when I had Sylvia. I thought they would love these. I also made some zucchini slice that wasn’t very popular in my household. However it is something that my mum would make for us when I was little so I thought it was good comfort food. (Recipe to come.) 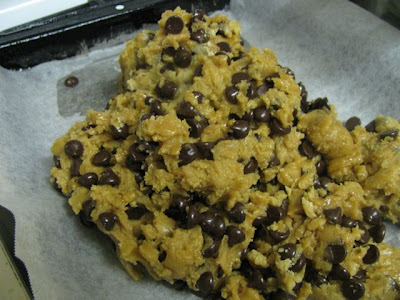 It was the choc chip cookie bars that was the winning recipe. The mixture looked right and when it came out of the oven in the evening I exercised some self control but decided to try them warm before I went to bed. It was so so so good. I gave E a taste and he said I should just give Andy and Erica the zucchini slice. 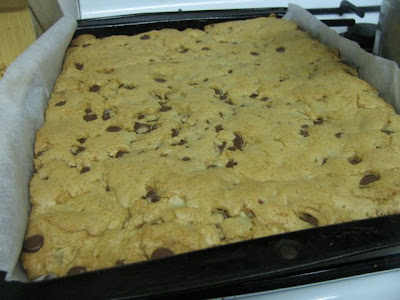 Of course I took them most of the choc chip cookie bars as well as the zucchini slice. Ashton was so tiny and all swaddled up in a rug against the winter cold. She lay in my arms sleeping for most of our visit. Her big brother, Cooper, and Sylvia weren’t too fussed about the baby. They were more interested in sitting at the little table and sharing food. Once Cooper saw the bars he wasn’t happy until he got one. But he did give Sylvia a small piece. They both devoured them enthusiastically.

I am sold on making choc chip cookies in bars. Though they take longer to cook and longer to cool this is not necessarily a bad thing. I often forget about cookies because their cooking time is so short and I often struggle to find room for a big batch to cool on a wire rack. It also saves time on spooning out individual cookies and having to bake in a few batches as they usually don’t all fit in my oven's top shelf. So I think the bars are more convenient although once sliced into bars they are a little more fragile. 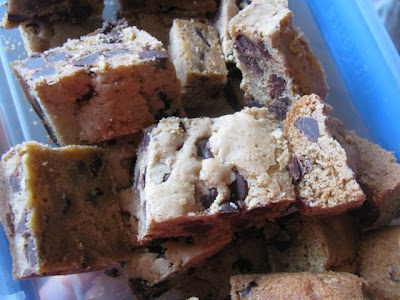 But the most important thing is just how good these taste. They are indeed chewy, buttery and packed with chocolate. I think I could just about call these blondies, especially if I used butterscotch chips or white choc chips. Alternatively you could see it as a giant cookie. But whatever they are called, this recipe is definitely a keeper!

Melt butter in a large mixing bowl and stir in the brown sugar. Mix in the egg, egg yolk and vanilla. Add flour, salt and bicarb of soda and gently mix until almost combined. Add choc chops and stir in until just combined. It will be a stiff mixture.

Spread mixture into the lamington tin and use the back of the spoon to smooth down. Bake for 24-28 minutes or until top is light golden brown and the mixture edges are pulling away from the sides of the pan.

Cool in the tin and then cut into small squares or rectangles in the pan. (The suggestion from My Kitchen Café is 2 inch squares but these are quite filling so I cut smaller squares.)

On the Stereo:
Epoche Eclipse 30 year anthology: Hawkwind
Posted by Johanna GGG at 17:26