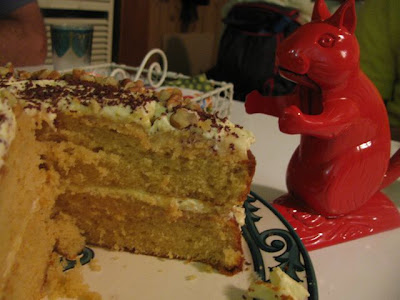 It is ironic that butterscotch was both the trouble and the troubleshooter in E's birthday cakes this year. He wanted a sponge cake and when I presented him with Nigella's layer cakes in How to be a Domestic Goddess, he chose the Butterscotch Layer Cake. Unable to follow a recipe to the letter, I was taken with the idea of using dulche de leche and marscapone (in Birthday Cakes for Kids) in place of Nigella's butterscotch sauce and cream. It was a success of sorts. 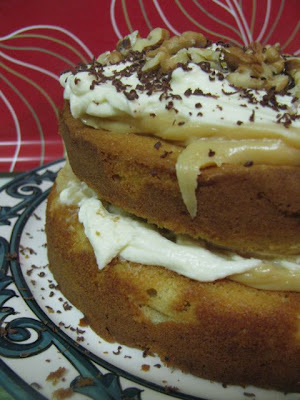 My dad and my brother Dave came for dinner on E's birthday. Birthdays are always a big occasion for making yummy food but having Dave over for his first visit to our house made the night doubly special. It also meant I could make food that served more people. Layer cakes are too much for the two of us but with a few more stomachs to full, I could justify it.

Layer cakes aren't my thing. But when it is all that E wants for his birthday cake, I do my best. The idea of a butterscotch cake and caramel/butterscotch filling actually appealed. The filling is just like the one my mum does in the family favourite, caramel tart. I had a day of running around buying presents, making rogan josh curry and baking cake on E's birthday and was quite proud of the cake when everyone arrived for dinner. It looked lovely. 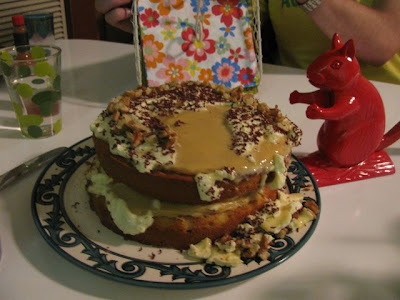 With the cake all ready, we ate the curry. I then went to get the cake out of the kitchen and found it no longer looked so impressive. It was a bit more like a landslide with the top layer of cake sliding sideways and the marscapone sliding off the caramel. You can see the look of horror on the squirrel who was helping crack walnuts to decorate the top of the cake!

Perhaps I should have followed the recipe more closely. It had the marscapone first and then the dulce de leche on top. Their duche de leche must have been softer. My dulce de leche was so thick that I couldn't have spread it onto a creamy filling. When talking to a friend, she suggested piping it on. I wouldn't mind an opportunity to try this again on another special occasion, if I am feeling brave. 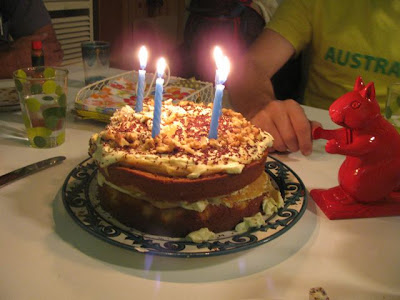 However, on this occasion, a little landslide wasn't going to dampen the celebrations. I spread the marscapone back on top of the cake , straightened up the layers and planted some candles for E to blow out. The cake tasted absolutely delicious. It was light and buttery with a superb sweet and creamy butterscotch and marscapone filling. A splendid time was had by all and my dad was able to take some cake home for my mum. Most importantly, the birthday boy was most pleased with his cake.

Previously on Green Gourmet Giraffe:
This time last year: Mushroom and Lentil Ragout
This time two years ago: Bugs Bunny, Daleks and Carrot Paté
This time three years ago: Why do we need another food blog anyway?

Butterscotch Layer Cake
cake from How to Be a Domestic Goddess

Preheat oven to 180 C and grease and line two 20cm round cake tins. Place all cake ingredients except the cream into a large bowl and beat well with electric beaters (or, as Nigella does it, in the food processor). Add 2 - 4 tablespoons of cream. Nigella said only to add the full 4 if the mixture is not runny. Mine was not runny and I can't remember if I added 2 or 4 (I think I did 2 dessertspoons) but it was fine. Spoon into cake tins and bake for 30-40 minutes or until golden brown and a skewer inserted in the middle comes out cleanly (mine took 40 minutes).

Let cake sit for about 10 minutes before turning out of the tin. Mine cooled for a couple of hours before filling - maybe if they had been stone cold they might not have had the landslide effect.

Place all ingredients in a large microwave-proof bowl and stir. It doesn't look like much mixture but it needs a large bowl because it will bubble up a lot in the microwave. Microwave on high for 2 minutes. Take out and stir. At this stage it smells like boiled milk but persevere. 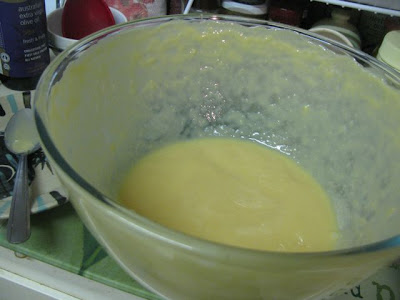 Microwave for another 2 minutes and then stir. Return to the microwave for a 3rd spell of 2 minutes or until the mixture is curdled. Bear in mind that each microwave is subtly difference and you might need a little more or a little less time. See photo below to see how mine looked. 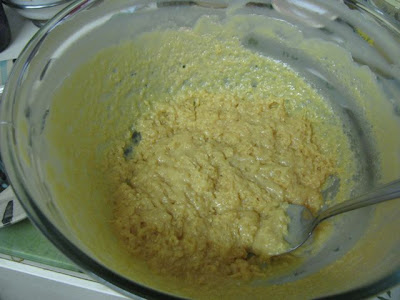 At this stage vigorously stir until smooth. The Cooking for Engineers site used a whisk but I found a spoon did the job just fine. It is both a relief and a miracle when the curdled condensed milk becomes smooth. 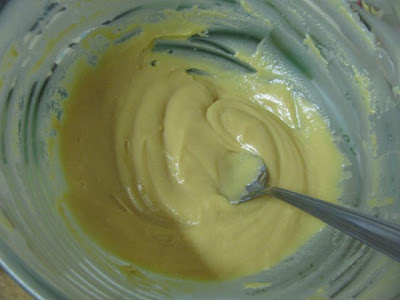 On the Stereo:
Living in the Past: Jethro Tull
Posted by Johanna GGG at 19:52