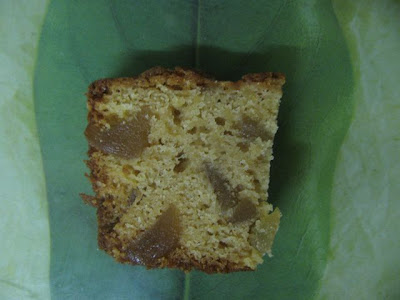 I mentioned in my last post that I had meant to bake my mum something for Mother's Day. Well she came and stayed for a couple of nights earlier this week to help look after Sylvia while E is away and I have been working. So I had the opportunity to make her the Sticky Apple and Ginger Cake that I had seen on Cake, Crumbs and Cooking recently.

Interestingly enough my only other experience of cooking with crystallised stem ginger is the Chocolate and Ginger Flapjacks I made based on on another recipe from C of Cake, Crumbs and Cooking. She must be my sticky ginger guru! 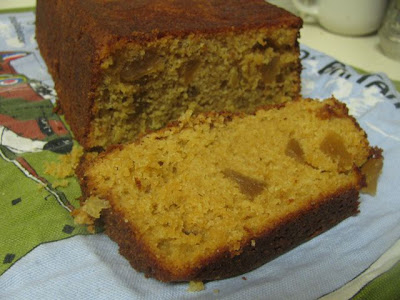 C raved about this cake based on a recipe from Waitrose. The Waitrose recipe was actually a simnel cake with marzipan baked on top. I wouldn't mind trying it this way some time or even lumps of marzipan in the cake (like Nigella's marzipan fruit cake). However, marzipan is not something I usually have the in house, unlike the other ingredients so I was happy to follow C's lead and bake the cake without it.

I liked the cake but would have liked a bit more fruity taste. It was a shame that the apple was overpowered by the ginger. But it was a lovely moist buttery cake and quite sweet even with my reduction in sugar because I ran out of brown sugar. I also reduced the ginger because, like C, I only had a 125g bag of the crystallised stuff. 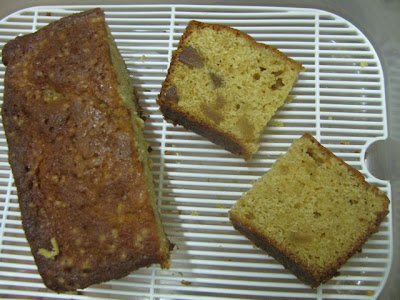 I would not rave about the cake quite as much as C but I suspect my mum would. She loved it with a cup of tea after arriving home from a night out with my dad. I knew it would be just her thing as she loves ginger and apples. We share a lot of loves in food but not everything. After all my mum ordered tripe the other day when dining out! Hmmm, my violent dislike of the idea of tripe (never having eaten it) makes me think that maybe my enjoyment of this cake is closer to my mum's than I might think.

Sticky ginger and apple cake
Adapted from Cake, Crumbs and Cooking
Preheat the oven to 170C or gas mark 3. Grease and line 20cm round cake tin (I used a loaf tin).

Melt the butter in a large saucepan (or in the microwave using a microwave-proof mixing bowl as I did) and stir in the sugar. Cool slightly, then beat in 2 eggs and the root ginger. Stir in the flour, then the apple and crystallised ginger.

Scrape the mixture into the prepared tin and bake for about 1 hour or until a skewer inserted in the middle comes out cleanly (well mine was clean but the recipe says it might have a few moist crumbs clinging to it). If it is getting too brown, cover with some foil but a bit of golden brown colour tastes good as it is so sweet and buttery.

On the Stereo:
Night on my Side: Gemma Hayes
Posted by Johanna GGG at 21:15