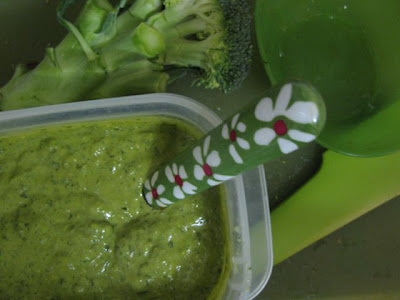 Over the past week or so I have been experimenting with spinach and vegan cheeze sauce. So this post goes from vibrant sauce to creamy soup, from market to high chair, with musing about the mysteries of nutritional yeast flakes, whinging about a lost wallet and all the while I am constantly having sylvia climbing over me! Yes that is my life right now. 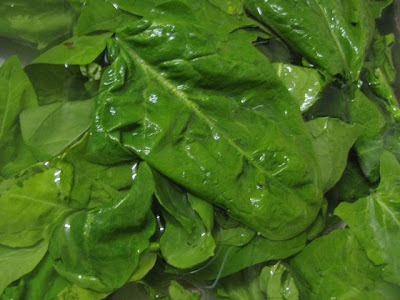 But where to start? Perhaps first of all I should tell you that my quest for a spinach cheezy sauce started with Ricki and Kim's Savoury or Sweet Kitchen Challenge, which focuses on spinach this month. I tried to find spinach at the Collingwood Children's Farm Farmer's Market about a week ago but there was none to be found, making me wonder if it was out of season.

No spinach but l had lots of ideas. I had seen Scrumptious of In My Box post a photo of an amazing Tofu Florentine (broiled marinated tofu over garlicky chard and roasted root vegetables, topped with Cheezy sauce). I couldn't find a recipe and then I thought what if I blended spinach with the cheeze sauce! I love the idea of spinach being a nutrient packed food dye. 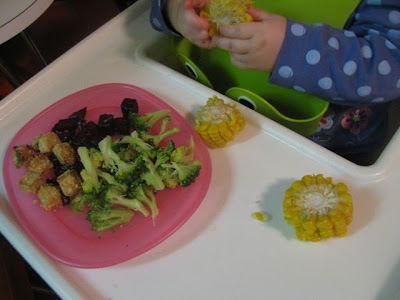 Upon getting home after the farmer's market I tried a marinated tofu. It is something I used to do a lot and have fallen out of the habit and wish it hadn't been before I started blogging because I don't have any record of what I did. What I did have was some GF toasted maize that I had bought on a whim and seemed a good way to crumb the tofu. The first lot I did I just dipped in the marinade without soaking and they were a bit bland. So the other half of the tofu sat in the marinade for about an hour and it was delicious when crumbed and baked. Even Sylvia loved the little chunks of tofu. 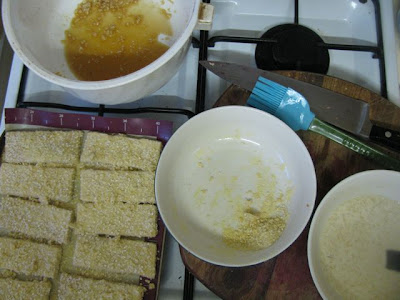 The next week I was at a meeting near the Queen Vic Market so at lunchtime I bought spinach and tofu in preparation to make the dish in my head a reality. I felt confident in marinating and preparing the tofu after my test run. However the final tofu was not so good because I bought an unfamiliar brand which was so firm that it did not soak up the marinade. D'oh!

Unfortunately my main problems were elsewhere. I was inspired by Steph's nacho cheese dip. I had even tasted it at a pot luck so I still love the recipe. I just took too many liberties and don't understand nutritional yeast flakes enough. Known to their friends as 'nooch' they are used by vegans to impart some cheesey flavour, but of course aren't exactly like cheese. This dip had a lot of nooch which ended up tasting quite tart ad tangy but it needed more seasoning. (These days I am constantly underseasoning my food in the hope sylvia will eat it and then when she rejects it I find myself eating bland food.) 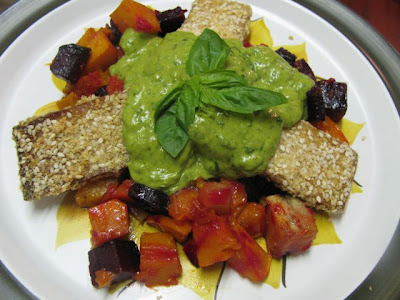 So the final dinner looked pretty (though not as pretty as Scrumptious's photo) but it was lacking. The tofu at the centre of the meal was crunchy but tasteless. The spinach sauce was not quite right.. However it tasted good with the slightly sweet, lightly salted roasted pumpkin, beetroot and fennel. And the sauce was a wonderful vibrant green. 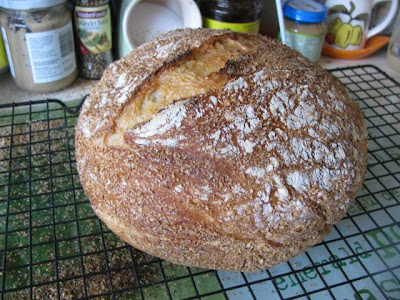 The highlight of the meal was probably my loaf of no-knead bread that accompanied the tofu, veg and sauce. At least this worked because not much else has. On Sunday Sylvia and I took the train to the city to go to the Buddha's Day and Multicultural Festival. I wanted to check out the vegetarian stalls but it wasn't meant to be. 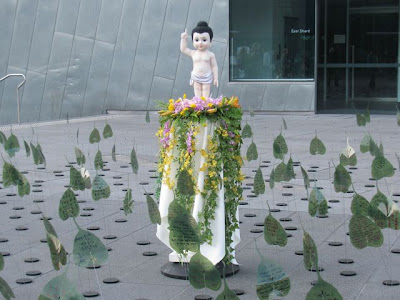 Perhaps it was a sign I shouldn't have gone that E was and my friend who was going to go with us was sick. Instead I had the disappointment of passing the stalls without tasting one mouthful because I discovered that my wallet had disappeared upon arriving at Federation Square. I couldn't even purchase a leaf for the above Bodhi Field of Enlightenment.

Given that I achieved no enlightenment on Sunday, I will pause for a whinge. Firstly I fell into temptation when I spied the first edition of the Masterchef Australia magazine. Though it has some good recipes, it annoyed me with a spotlight on blogs that included the line about the Daring Bakers Challenge being about vying to be the best. I took umbrage at the idea that blogging is all about competition with each other rather than embracing a community of cooks who share lots of ideas and encouragement. 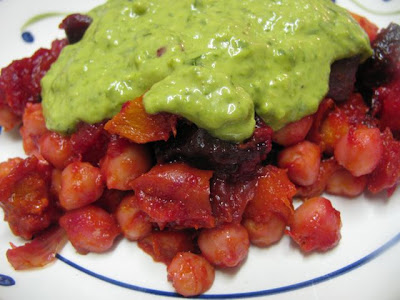 That night I ditched the tofu and tried the dish again with chickpeas, roasted veg and cheezy spinach sauce. It was ok but the sauce still wasn't quite right. I was so disappointed with it that I decided to try again. 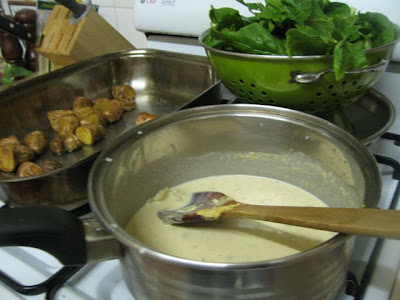 This time I used much less nutritional yeast flakes and more seasoning. The taste was much better but I was disappointed that I didn't have the lovely creamy texture that I had enjoyed in the first sauce. Was it because I had less nooch or because I waited til the spinach was cooked before blending. This again is where I wish I understood the nooch better. I don't have time for more experimentation so will present this work-in-progress recipe as I enjoyed the flavours. It wasn't quite perfect because the garlic wasn't cooked enough, I forgot the lemon juice, and the sauce was a little pasty from the cornflour. So I have changed these on my recipe below.

In the future I would like to try this again with some other vegan cheeze sauces. I would like to try the one from Vegan Brunch that Cindy and Michael loved. I also liked the idea of Maple Spice in creating a vegan cheezy spinach pasta sauce. I have tried a few other cheeze sauces before. They have been good but not great so I still hope to find the ones with the 'wow' factor, but I guess I have to stop comparing them to dairy cheese sauces. 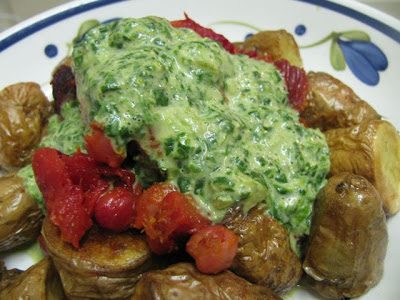 I also served the sauce with roasted pink fir apple potatoes because I needed some extra comfort in my dinner on Monday. You can probably guess that it was no fun chasing my lost wallet. I was lucky enough that someone handed it in but then I spent the day trying to contact lost property who were constantly engaged and when they weren't they had no record of it.

However there was a lot more to whinge about than my wallet. I was tired from Sylvia's restless evening (though not as tired as my friend who came over with her kid who hadn't slept til 1.30am the previous night). Sylvia was unusually grizzly because she had a cold. She wanted to climb on the sofa or verandah and kept falling over. I put her in a new dress on Sunday that seemed huge and when I checked I found it was a size too big despite the size on the hanger being correct. A black hole has opened up in my house where things are mysteriously disappearing - a sock, a shoe and even a half eaten apple.

I was mortified when making tea for visitors to find we had no tea bags. However it wasn't all bad. There was a ten dollar note on the table (which is like gold when a wallet goes missing.) The kids loved the gingerbread biscuits that I baked. Sylvia is getting more and more picky about her dinner so I get please when she does eat. She has also loved the rhubarb crumble I recently made. It was even better that it had so little liquid that it stuck to the spoon as she wants to feed herself but still is a bit wobbly with the spoon. And for every time Sylvia cries in frustration, there are so many moments that she makes me laugh with her cheeky giggles and delight at her achievements. 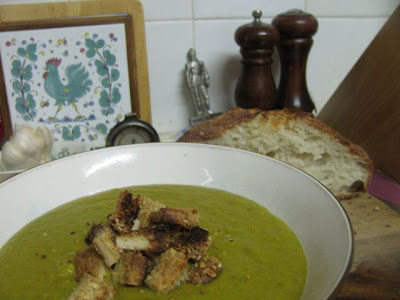 Yesterday morning I decided to make pumpkin and bean soup with fennel, inspired by Vicki's recent pumpkin and chickpea soup. I would use less fennel next time (Vicki used much more pumpkin than I) but I loved the flavour. I also added the remaining spinach cheeze sauce to make it creamy and slightly green. I also added the tofu as croutons. Again I had no-knead bread, this time made by my mum. It was a delicious dinner.

A pot of soup on the stove is always a comfort. My days are still going awry so I need soup. Yesterday I got my wallet back - the cash had disappeared but the cards were there. Then I met my mum and we fruitlessly searched for Earl Canteen on Collins Street (which I later discovered is at 500 Bourke St), went to Each Peach which was closed on Tuesdays, and finally sat down at A Minor Place only to find it was so late that we had to rush through lunch. Today I spent a lot of the day at the allergy clinic at the hospital following up Sylvia's emergency department visit a few months back. And I am looking forward to E returning from the UK.

Enough whinging. I am sending Ricki and Kim the soup for the Savoury or Sweet Kitchen Challenge. It is vegan and gluten free but after all my trials, I suspect that it wont suit either of their diets but I hope it might provide inspiration for further experimentation.

Crumbed tofu
inspired by http://www.taste.com.au/recipes/15193/sesame+crumbed+tofu+salad
serves 4 as a side dish

Marinate the tofu in mirin, soy sauce, rice vinegar, sesame oil and garlic for about 1 hour (or more). Mix sesame seeds and maize in a bowl and dip tofu in this (NB I tried it the second time by dipping in soy milk first - I needed more seeds and maize but wondered if it took away from the marinade). Arrange crumbed tofu on a baking tray and bake at 220 C for 25 minutes, turn and bake for another 15 minutes.

Fry onion for 5-10 minutes or until soft and translucent. Add garlic and stir over heat another 2-3 minutes. Cool slightly. Add cashew butter and slowly add milk. Add remaining ingredients (except spinach) and stir till well combined. Add spinach. Blend. Cook a few minutes so the spinach will cook into the sauce.