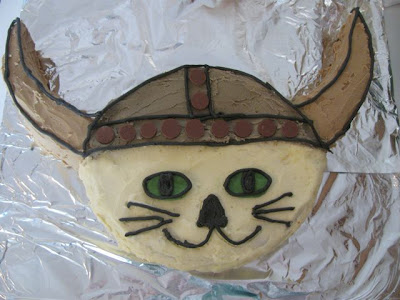 Last week E found me giggling manically at the laptop. 'It's research,' I explained. I showed him and he joined in the laughter. Last year when searching for birthday cards for E I had seen one with a viking cat on it. I walked away, returned and the card was sold. Never to be found again. I decided that I would make a viking cat cake on his next birthday. Well the next birthday was last week and I was actually a little overwhelmed at how I would bring my brilliant idea to life.

Hence, E found me surfing the net in search of viking cats. Strangely enough, there weren't other viking cat cakes. But I did find some hilarious photos of cats wearing viking helmets and a club called the Viking Cat Club (which is for owners of Norwegian forest cats). We are now wondering about making our own tin foil helmet for Zinc but I am not sure what she would think about it. 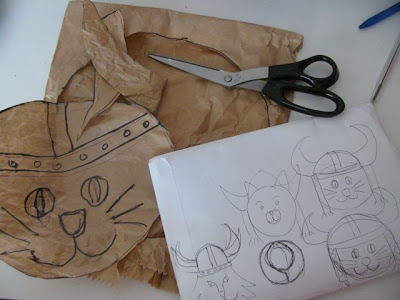 E's love of cats is well documented in this blog and goes back to when he was a wee boy and pleaded with his parents for his first cat who came from a mill. I suspect his interest in vikings started young as well because he was a fan of Asterix. My awareness of it began when we went on a Viking Splash Tour of Dublin. It was a fun way to see the city and E particularly liked being encouraged to roar at people we passed by. He now loves his neofolk music in which viking mythology would not be out of place.

So the viking cat felt just right for him. I made it on the weekend when we had some family around for a birthday afternoon tea. I wanted to do a cat with both a helmet and plaits but decided to do a cake that I could cut out of a round cake. Plaits were too difficult so they had to go. I have step by step instructions below on how to make a cake like mine. 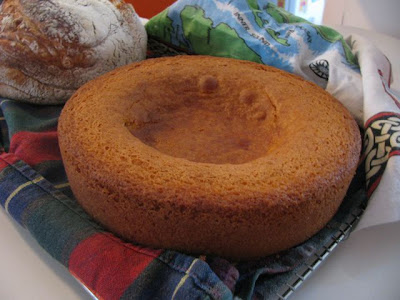 I do not include a recipe for the sponge cake requested by E. instead I will share my troubleshooting. He asked for a British style sponge cake, which I call a butter cake and is similar to a pound cake. (A bit like this one). I had planned to write up the recipe but it all went a bit Pete Tong. It sunk so badly that it looked like a bomb crater. I bake a lot of cakes and rarely have this problem so I was quite perplexed.

My main problem was that I needed a flat cake surface to make my viking cat cake. Filling it with cream and berries was not an option in this case. E wasn't much help when he suggested I use the nearby bowl of mixture to fill it - it was sausage roll filling! I made the cake the day before so I lay in bed thinking up solutions. I considered baking another cake and cutting out a crater shape that I could wedge in with cream. But I'd used all my eggs and it would defeat the purpose of trying not to have oodles of cake leftover. I had made some dulce de leche for E's cake on his actual birthday and I had another tin of condensed milk. 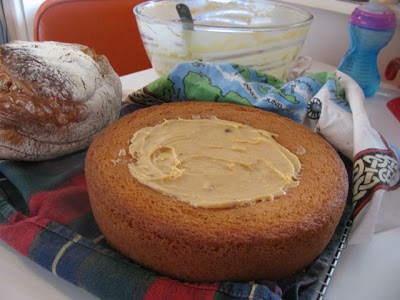 I decided this caramel / butterscotch filling would be firm enough to work on and delicious enough to fill the cake. I will tell you more how I made it when I post about the butterscotch birthday cake but I can tell you here it is quick and easy when done in the microwave. And it worked for providing a flat surface for the cake. In fact no one guessed and they were quite surprised when the cake was cut

My mum and I had a long discussion about what might have gone wrong with the cake. We looked on the internet for ideas. There was no obvious problem. I used the same oven, same cake tins, same style of recipe that I often use. I know I put the baking powder in and it was fresh.

The recipe came from Annie Rigg's Birthday Cakes for Kids that I recently bought. It has four different size recipes for a plain sponge cake but specifies different cake tins depending on the novelty cake being made. I thought maybe I chose the wrong amount of cake batter for my tin. I also gave it a good amount of beating with the electric beaters which I don't usually do. Maybe I should stick to hand mixing cakes.

I hope to do a bit more experimenting with this recipe and will post it if it will work for me because it is a good solid cake for a novelty cake decorating. However I confess that, although this is just the sort of recipe that E loves, I found it a bit dull and the buttercream was too sweet and rich for me. My favourite part of the cake was the caramel filling. 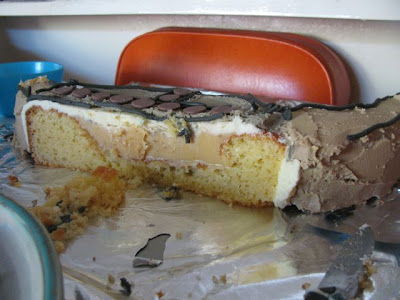 We had a lovely afternoon tea. My mum and dad, and my sister Fran and her partner John came along. Just a small gathering for my family - due to illness and other parties - but it was very relaxing and enjoyable. Sylvia has started walking and amused us with her tottering steps and proud little smile. Mum brought some great Anzac biscuits because it was Anzac Day the previous day. Fran made a soft delicious banana cake with sour cream icing. I also made some sausage rolls and treacle scones (that I will post about later). Happy birthday to E and to GGG! 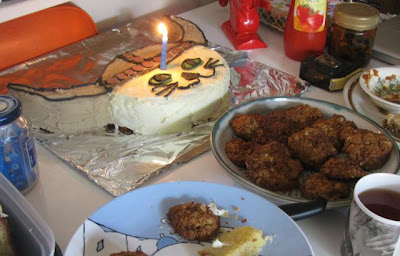 I started this blog with a birthday cake for E so he always shares his cake with the Green Gourmet Giraffe. The blog turns 3 years old today. Incredible to think I have been going so long. As the blog grows and grows, I constantly think of ways for readers to find all the recipes lingering in the dark corners of the index. I have decided as a blogiversary present, I will trial doing a list of the posts or recipes from this time in previous years (inspired by other bloggers). I hope it will help to remind me and you of some of the blog's past gems. Any feedback on this is welcome.

How to make a viking cat cake

You will need:
I started by drawing the design I needed to follow. Most important in doing this was working out how it could be cut out of a cake. I traced my cake tin on a piece of paper cut from a paper bag. 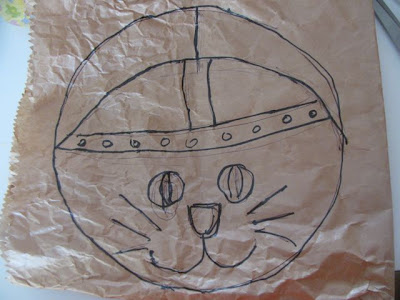 I decided on a simple design of cutting two horns and having an oval face. I cut it out to check it looked ok. This template was useful for thinking about the size of the tray needed to put the cake on and also to check against when I was making the cake. 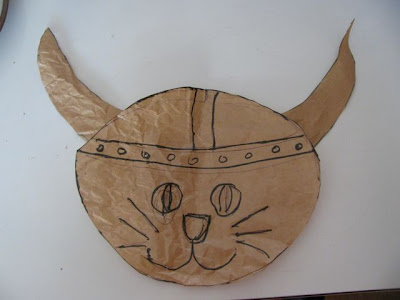 I made (and rescued) my butter cake the day before. The makes the cake easier to cut into shapes the next day (and gives time to think about troubleshooting.) I used my template to cut the horns from the cake. Once I had my cake cut, I covered a baking tray with foil and the arranged the cake on the tray. 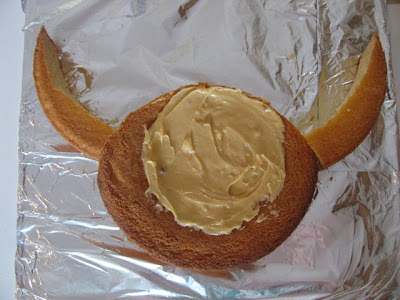 Next I made the buttercream. It was a far richer recipe than I usually make (and I had some leftover). I took 210g of softened butter and beat it with electric beaters til smooth. Then I gradually added 500g of icing sugar (confectioners sugar, powdered sugar). E wanted a white cat like Zinc so I spread some white icing across the lower three fifths of the oval including around the sides.

Next I set aside a few spoonfuls of white icing just in case I needed some to patch the cake or cover up any problem areas. I added a combination of yellow, red and blue food colouring to the bulk of the icing to make a light brown colour. This wasn't as easy as I expected. I started with liquid colouring. But I only have pink rather than red colouring and I kept adding too much blue so it looked green. Finally I added a generous amount of the red powdered food colour (forgetting I had my beetroot food colouring - do'h!) I think the proper red helped achieve the right colour. I spread icing across the horns and used a little to stick it to the main cake/face at the bottom of the helmet.

Making the helmet colour was much easier. I just added some black food colouring powder to make the brown darker. This was then spread across the top two fifths of the oval. A note on the buttercream frosting or icing. I found it was almost like working with plasticine because it was quite thick. I found at times I had to use my fingers to spread it because it really stuck to the knife. 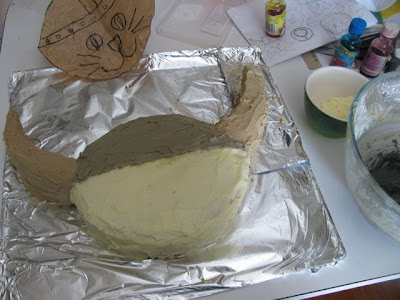 The thick icing was great when it came to making the eyes. I put a little of the white icing in a small bowl, added some yellow and blue food colourings and mixed it to make a green blob. I took two small amounts of this icing, made little balls and then flattened them into ovals. The icing actually peeled off if it was in the wrong position or the wrong shape. 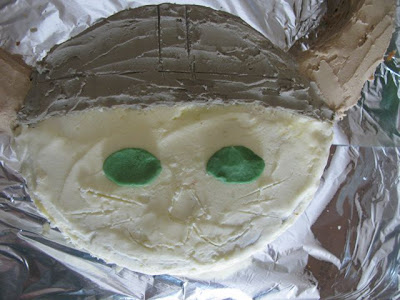 I made the black icing for piping by adding lots of black to the dark brown icing. Interestingly it never seemed to get black enough when I was mixing it but when it was on the cake it looked dark enough. Before piping I used a sharp knife to score where I wanted to pipe. I added the chocolate buttons to the helmet trim before piping.

I didn't find the piping easy. The icing was so thick that it would barely go through the writing pipe. More troubleshooting! I took the icing out of my icing gun and added just a few dribbles of water to make it more malleable. This made it easier to pipe though I still found it frustrating as it would stick to my finger if I was trying to nudge it into place. But I managed to pipe the eyes, nose, mouth, whiskers and outline of the helmet.

I was pleased with my final cake. It didn't look quite like the birthday card that originally inspired it but it seemed to be a good approximation of what I had been aiming for. 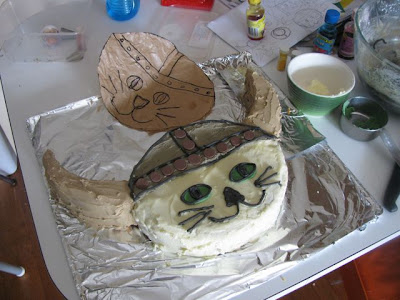 On the Stereo:
The music from the Rainer Werner Fassbinder Films: Peer Raben
Posted by Johanna GGG at 08:00