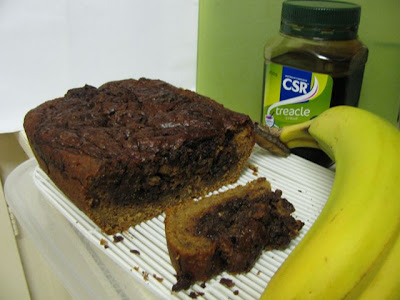 The hot cross buns have been baked. My Easter nut roast is cooked. The baby is sleeping. The SBS movie (This is England) is on the telly and the computer is on my lap. I have a little time to share a chocolate recipe and some reflections so even if you don't celebrate Easter, you can share a little joy with me! 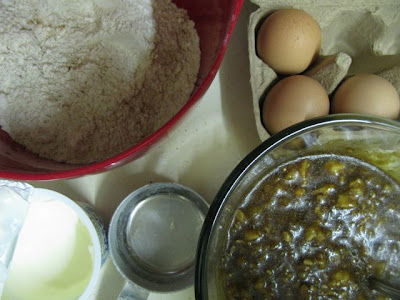 I had a strange dream last night. It was the end of the world. Everyone was gathering at some huge multistory hotel. I got separated from E and Sylvia and was looking for them. Instead I ended up with some bloggers. Dinner was served. We looked at each other and decided we should take a photo of the food just in case we got back to our computers. When I woke I laughed at the dream but I was intrigued by it.

Good Friday makes me remember the nuns telling us how important it was that Christ died on the cross for us. I come from a culture where it makes sense that all the shops are closed. The world seems to be in mourning. Death feels like the end of the world in our own little private realms but Good Friday gives us a glimpse of the deserted streets and cityscapes of the apocalypse. No wonder I was dreaming about the end of the world 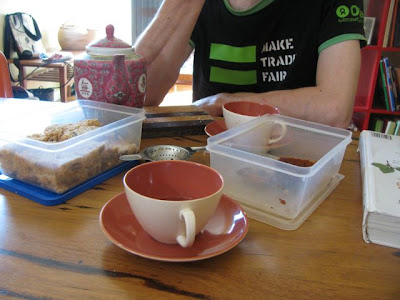 But there are signs that life is changing. I was surprised to see petrol stations open yesterday when I was on the road. I was on my way to visit my friend Yaz to bake hot cross buns. It was his first time. We arrived at lunchtime and ate first. I had chickpea wraps, cheese and biscuits, and lattice cheesecake. Sylvia had baked beans and watermelon. I had brought some banana nutella bread but we saved that to have for afternoon tea with rice bubble and date slice. 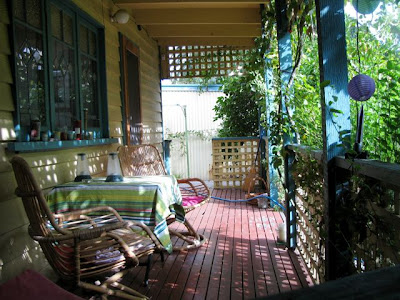 Baking with yeast is a leisurely activity that has the right pace for Good Friday. Sylvia sat on Yaz's bench while we kneaded the dough and she discovered a love of sultanas (the dried fruit type rather than the wives of sultans). We sat in the garden while the buns rose. Eating ripe figs from overhead. Sylvia swinging in the hammock. Watching Yaz's partner, Mindy, doing some gardening. 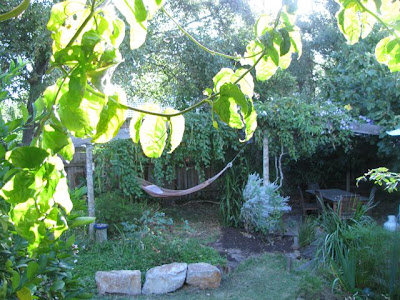 Yaz worried the buns weren't rising enough and was a bit dubious about my flour and water crosses. He was in flavour of pastry crosses, especially when my cross mixture was too thick and we were virtually coaxing it into place with our fingers. Fortunately the second batch of flour and water was better and worked as it should. The buns were excellent. Quite dense with slightly chewy crosses and sticky sweet glaze. Yaz conceded the crosses had a rustic charm about them.

Unfortunately the hot cross buns came out of the oven just as we were ready for dinner. Not great timing but no reason to stop to us tasting them hot out of the oven. So so good. Meanwhile Mindy and Yaz had been busy in the kitchen making dinner. Grilled portobello mushrooms in a burger bun with smoked cheese, accompanied by pear, parmesan and rocket salad, rice salad, patatas bravas. All delicious. I left with buns, fig jam and fresh figs. 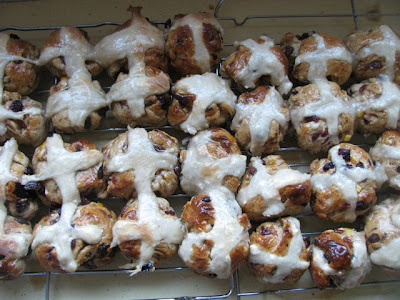 So much good food. I was glad I had brought some cake. It was inspired by some old bananas, a jar of nutella and E's love of treacle scones. I had been saving the nutella to make pumpkin and chocolate scrolls based on these recipes. However, the bananas were needy, the yeast seemed too challenging and the nutella had been in the pantry too long. 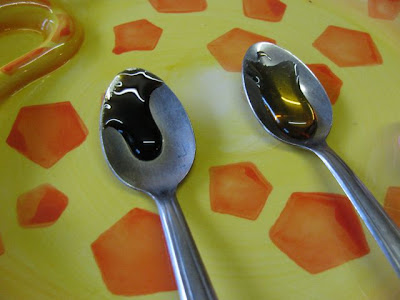 I told E I was going to make banana and nutella cake. He wanted me to make treacle scones. I compromised and told him I would put treacle in the cake. But first I had to get him to taste golden syrup and treacle to check he really did want treacle. 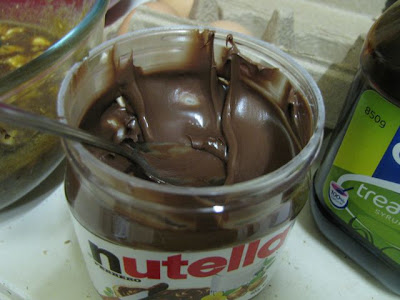 The dark intense treacle and some spices added to the cake made it taste a bit like gingerbread. The nutella didn't swirl cleanly but got mixed up with the batter and was soft like a chocolate custard. I can highly recommend the cake. My offering yesterday didn't last long. We still have a few pieces left here. I might just take them to my parents when we go there for Easter dinner tomorrow. Hope you have a nice Easter or at least enjoy some chocolate and some good food.

Spoon batter into prepared tin(s). Spoon nutella on top and use a skewer to swirl in. (I wondered if this would be better if I put in half the batter, nutella, and then the remaining batter. I might try this next time.)

Bake for about 40 minutes or til cake has become golden brown and a skewer inserted in the middle comes out cleanly or the centre feels light and springy. (I used only one loaf tin and it was a bit high so the cake took over an hour and still was a little soft.) Cool in the tin for at least 15 minutes and turn onto a wire rack to cool.

On the Stereo:
Gather in the Mushrooms: Various Artists