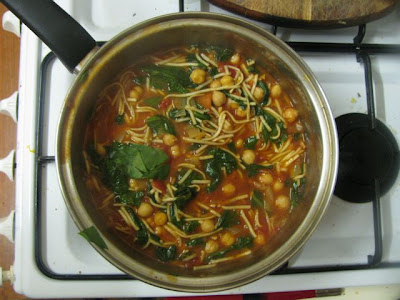 Last weekend we went to Collingwood Children’s Farm Farmer’s Market. It is always full of interesting food and lively families. Sylvia loved watching the other kids. E was content to sit on a hay bale eating his farmer’s breakfast. I loved perusing the stalls in search of inspiration.

As usual, we were among the latecomers and I missed out on buying peaches, rhubarb and bread because I wanted a quick wander and a think before making any purchases. No’ fast, you’re last, as E likes to say. 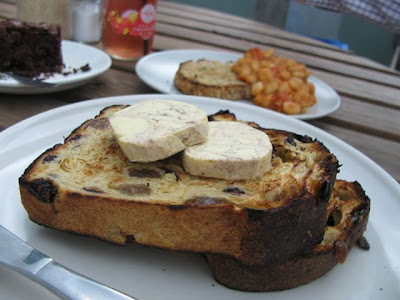 Sylvia was also very helpful with tasting foods for me. Stall holders are less offended if a baby shows their dislike by opening her mouth and just letting the food fall out but I don’t think I could get away with it. Unfortunately babies are so fickle. Sylvia took an initial dislike to a seeded sourdough and on that basis I decided to buy an excellent fruit bread from the Hope Bakery instead. Once I had made the decision, she then couldn’t get enough of the samples of the seeded bread.

Sylvia also loved the cooked corn on the cob that is sold on a stick for snacking. Unfortunately by the time we got her beans on toast at the café, she was tired and then the heavens opened and we knew the rain was a sign that it was time to go home. I had a lovely fruit toast with cinnamon butter that I ate quickly. The remains of E’s brownie came with us wrapped in a napkin. Sylvia's beans were barely touched. 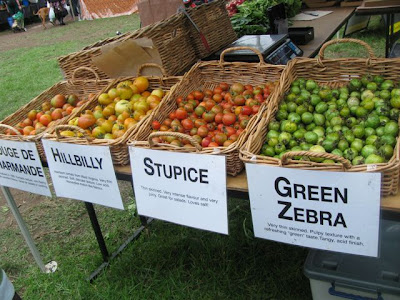 So much interesting food! I passed on the wonderfully-named heirloom tomatoes but bought sorrel but regret to say it only got used today (but it was excellent with some onions, potatoes, chickpeas, tomatoes and garlic over some cheese pancakes).. I found some heirloom rhubarb elsewhere after Di sold out of hers. I was excited by the angel hair pasta and decided it would be just the sort of thin pasta needed for a Chickpea and Spinach Soup recipe in An Honest Kitchen. 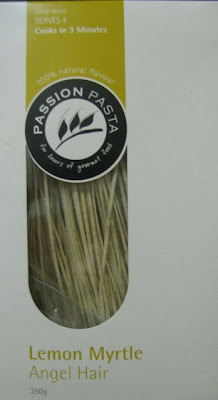 For those who are not familiar with this e-magazine, An Honest Kitchen is the brainchild of two bloggers that I love reading: nutritionist, Kathryn of Limes and Lycopene and amazing photographer, Lucy of Nourish Me. Both blogs are full of wise advice, lovely writing and great recipes. But I confess I don’t subscribe to An Honest Kitchen for a few reasons, the main ones being that I have so little time for reading online and when it comes to magazines I prefer a hard copy.

Nevertheless, when they announced a competition to photograph a dish from An Honest Kitchen, they were kind enough to extend the competition to those who don’t subscribe and those who don’t have a flickr account. Hey, I thought, what nice people to forgive me all my lack of subscriptions and let me participate anyway. I decided to join in, not with any expectation of winning, but because I really like Lucy and Kathryn and am much more comfortable with participation than subscriptions. 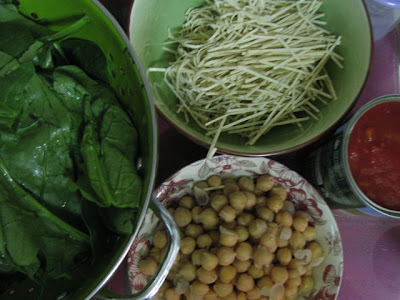 Well I went home from the farmers market with good food and good intentions. I had some kale and decided I would use it instead of spinach and then I just kept on going on tangents from the recipe til my dish was unrecognizable. It was terrible. I blame the kale that was past its best but the flavours didn’t quite work anyway. 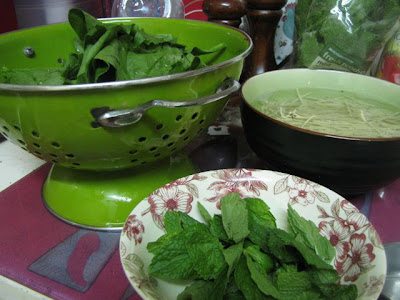 The next day I tried to follow the recipe again. I didn’t quite managed to stick to it but it was very close. The spinach was far superior to the kale. The soup was excellent: simple, fresh, quick and full of magnificent flavour. Not as many vegetables as I usually would like but still substantial enough to make a meal and much quicker than many of my soups. I wondered if maybe I should subscribe to An Honest Kitchen after all. 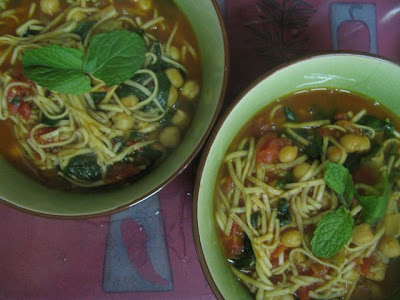 I am sending Lucy and Kathryn the top photo but I am sorry to say it isn’t my finest moment in photography. As usual, I was too impatient to take many photos but I hope you can see how good it tastes. As for the rest of my food, I am out of time and will need to tell you about it later. Below is what I did with the soup.

Chickpea & spinach soup
Adapted from An Honest Kitchen, Winter 2009/2010
Serves 2-3, as a meal
Heat a large saucepan on low heat. Add the olive oil and once that has warmed through, add the onions. Fry for about 5-10 minutes. While the onion are cooking boil the kettle. Break up the noodles into pieces about as long as your hand is wide. Pour the water over the noodles to soak while you attend to the rest of the soup.

Add the chickpeas, tomatoes and about 400ml water (ie fill the empty tomato tin with water and pour into saucepan to rinse out as much of the tomatoes as possible.) Turn the hotplate up to medium heat. Bring to the boil and cook for about 5 minutes (I think this is meant to be the opposite of a gentle simmer but I can’t find the words – robust simmer, powerful simmer, raucous simmer?) It doesn’t thicken, it just absorbs flavour.

When the tomato and chickpea soupy mixture is almost at the end of the sturdy simmer, drain the noodles. Add the drained noodles, spinach and most of the mint to the saucepan. Stir for about 2 minutes or until the spinach has just wilted and retains its bright green colour. Stir in the tamari and season to taste. Serve with some extra mint leaves as garnish.

Update May 2010: have found this works with broccoli added when I add the tomatoes and chickpeas and substituting soba noodles for the pasta.

Update: June 2017: made this with regular spaghetti so cooked it a little longer.  The sauce was thicker but delicious.  No mint about so used paprika, ginger powder, pepper and worcestershire sauce instead for seasoning.  I didn't add any greens into the soup but served them on the side.
On the stereo:
Blue: Joni Mitchell
Posted by Johanna GGG at 22:59