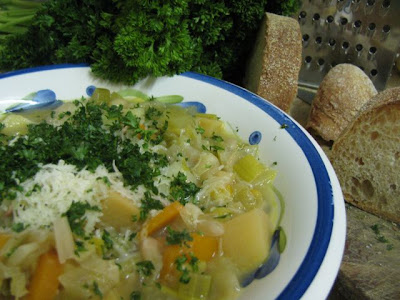 Sylvia has not been sleeping over the last few evenings. It is most exhausting. Fortunately we can take turns with her. It seems a great achievement that we have still managed to watch an old black and white horror movie, write a new song (E) and make soup (me). I was glad of the pot of soup when I got home last night after an impromptu visit to my folks in Geelong yesterday for John's birthday (my sister Francesca's partner).

The soup was one inspired by Jacqueline and Lisa's No Croutons Required event. This month the theme is the allium family (ie onions, leeks, garlic, shallots etc) in a soup or salad. As soon as I saw the theme, I remembered a garlicky soup that a housemate once made from one of my cookbooks. I think it was the Very Garlicky Soup in Richard Cawley's Green Feasts. So I made it on the weekend. 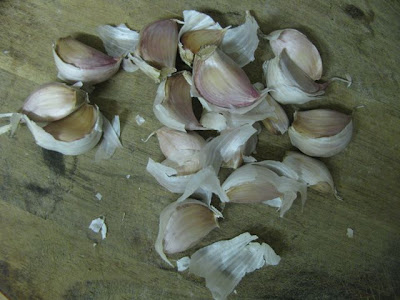 It is a most unusual soup. Though it has lots of vegetables in it, it is quite unlike my usual efforts. It has 16 cloves of garlic, blanched three times and cooked whole in the soup. Sounds intense but they add sweet mellow flavour rather than bite. The soup also has onions and leeks so it is full of allium. It is also lacking in colour. I chose to use yellow tomatoes because red tomatoes seemed too garish for this soup. Even the carrots seemed a little colourful and I wonder about using parsnips next time for a total whitewash.

It seems amazing that I managed to chop all those vegetables while Sylvia was so unsettled but it did mean we didn't need to rush home from Geelong too early the next day. Not that we were starving. We ate well at my mum and dad's. The roast dinner was full of interesting vegetables like beetroot. Even Sylvia loved it. 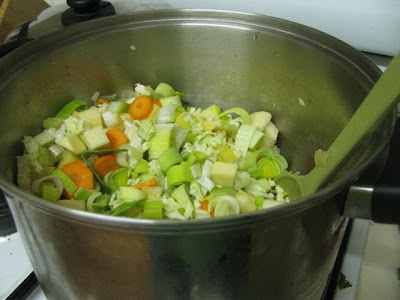 My mum and Fran did an excellent job with dessert. It was full of the decadence suitable for a birthday celebration (and the celiacs didn't miss out). We had chocolate pudding (with a GF version), sacher torte (made with soy flour so it was GF too), a GF flourless chocolate cake, macaroons and a sponge cake.

I then dropped in at my friend Kathleen's on the way home. Sylvia was fascinated by a bowl of citrus fruit. I was amused by Kathleen's son asking for a "tandarine" - I am not sure if he was after a tangello or a mandarine. Then on the way home I was saw one of the most intriguing car number plates that I have seen for some time: YNOTME. Clever or provocative? 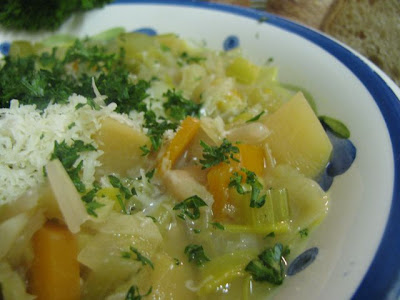 Once we got home, I was able to heat the soup and serve it quickly with some parmesan cheese and parsley. It was very good with some crusty sourdough bread. We were able to eat before watching Matt Smith's debut in Dr Who. It wasn't pretty watching him eating eating fishfingers dipped in custard. However, Matt Smith does an excellent job in filling the large hole left by David Tennant.

We had leftover soup for dinner after I got home from work tonight. It was excellent with a spoonful of pesto. So good I didn't even need bread. I am not sure I would make this soup too often but I would make it again. And I recommend it to others, not just for the taste but for a new perspective on garlic.

Add cannellini beans, garlic cloves, stock and water. Check and adjust seasoning according to taste (the recipe called for 1.7 litres of stock but I thought 500ml was enough.) Bring to the boil and simmer for about 20 minutes. If you are going to serve straight away simmer another 10 minutes or til the vegetables are soft and cooked. If you are going to eat it later, turn off the heat and cool in the pot. Reheat when ready to eat. Serve with parmesan cheese and parsley or pesto.

On the Stereo:
Red Perspective: Red House Painters
Posted by Johanna GGG at 23:14