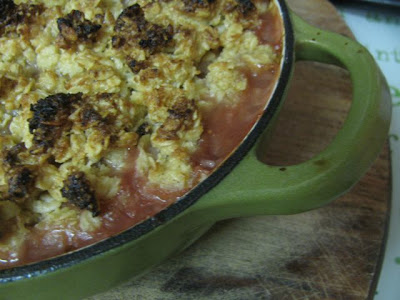 On my way to work this morning I noticed the elm trees in Royal Parade wearing their autumn colours. Brights greens give way to reds, yellow and brown. So it is in my kitchen that fresh summer fruits salads and smoothies are being replaced with stewed fruit in warm desserts and baked goods. Melbourne's gardens and markets are producing wonderful rhubarb, apples, pears, figs and walnuts right now. This is a long and rambling post but it illustrates how recipes morph into other dishes and draw on previous experiences. 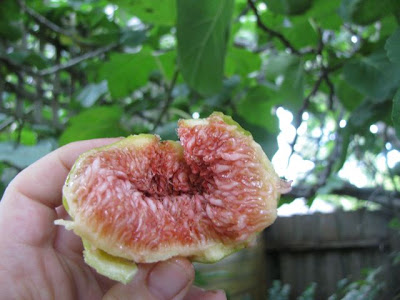 You may remember that over Easter I was given some fresh figs by my friend Yarrow. We ate some figs fresh but there were too many in need of immediate use. Susan had some interesting fig cake recipes but I decided to try this fig cake recipe and regretted it. It was one of those times when I made changes based on what was in the house and wished I had followed the recipe to the letter. 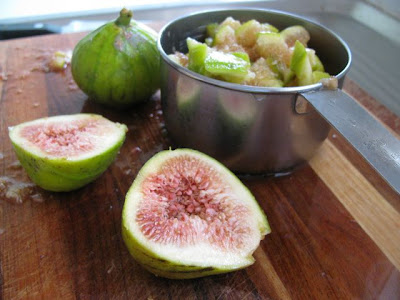 I was mortified at wasting the figs this way so when I saw cheap figs in a favourite fruit and veg shop I bought a punnet of 8. I needed another chance. This time I went simple and found a baked fig recipe using orange, honey and walnuts. The recipe suggested serving it over ice cream. However we rarely have ice cream in our house. 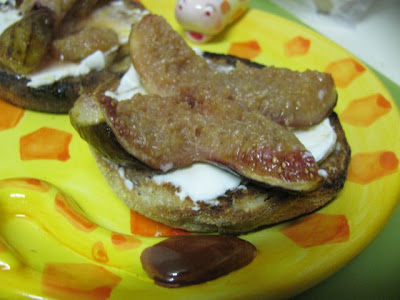 I do like to keep some fruit and spice English muffins in the freezer. I baked half the figs, squashed into a ramekin, with some orange juice, Cointreau, honey and butter. They were lovely with some cream cheese on muffins. The photo is not great but I hope you have some idea of how soft and sweet they were. They would be magnificent with a really good fruit toast and marscapone cheese. I particularly enjoyed the cold leftovers for breakfast on fruit muffins. 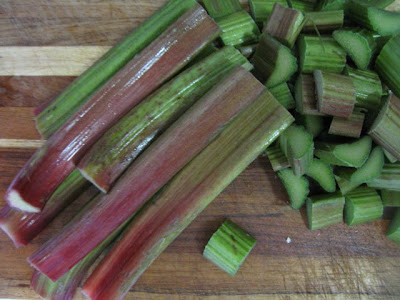 I bought rhubarb at the Collingwood farmer's market around the same time and decided to make rhubarb and apple crumble. I am a bit of a novice at stewed fruit. Last time I put rhubarb in a crumble I didn't cook it first and it was undercooked. So although my mum was on a country drive to Echuca with dad, I rang to check about stewing the fruit. Despite my dad relaying the instructions while mum drove, I still was disappointed in the brown goo that resulted from stewing the rhubarb and apples together. 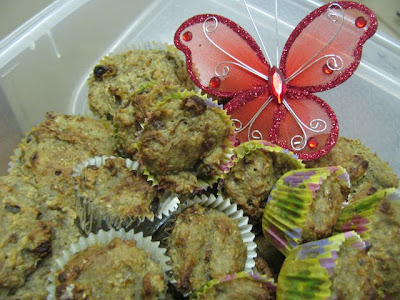 I made the crumble but it was too tart and didn't seem quite right. We ate the crumble topping and I scooped out the remaining stewed fruit and threw it into some banana muffins. It suited me to have extra fruit puree as I didn't have enough butter or eggs for the recipe. The muffins were surprisingly wonderful considering how much change I made to the recipe. Excellent dense cakey texture and full of fruity flavour but not overly sweet. 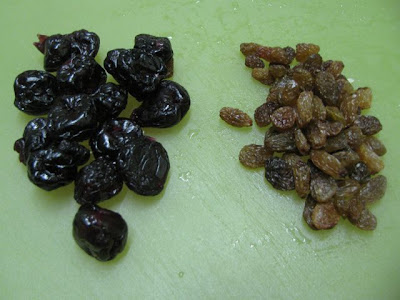 The original recipe was for Banana, Cherry and White Chocolate Muffins from Nigella Lawson's How to Be a Domestic Goddess. I bought some dried royal cherries at the market lately. They are unlike any other dried cherries I have encountered. Large (as you can see in the photo comparing them to sultanas) and tasting of real cherries unlike the artificiality of glace cherries but unbearably sweet unlike the smaller sour dried cherries. I chose the recipe, partly for an opportunity to use these cherries as Nigella did not specify which sort of cherries.

Unfortunately I found the cherries too sweet and preferred the sultanas so next time I would just use all sultanas (or sour dried cherries) rather than these cherries. I would also use apple puree if I didn't have rhubarb available but the muffins would loose a little of the flavour. 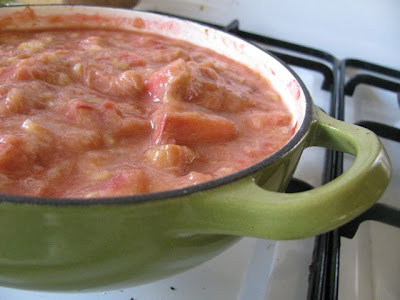 I had 4 figs left and another bunch of rhubarb on the weekend. I decided to repeat the baked figs but then I was concerned they weren't snug enough if I used anything bigger than a ramekin. My solution was to pile the chopped rhubarb around it and simply bake in honey and orange juice. It was still a little tart but I added an old banana and some golden syrup. The pink stewed fruit was immensely pleasing. 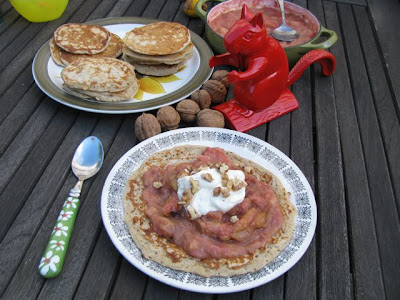 My vision for the figs was to serve them soft and honeyed on pancakes with a crisp cheese crust (a bit like the ones that they serve in the Pancake Parlour). The reality was far from it. I couldn't find the recipe I sought so I made a version of another pancake recipe with some cheese in it. Good recipe but not as crispy and cheesy as I envisioned. Perhaps I need to actually sprinkle cheese on the pancakes as I cook them. 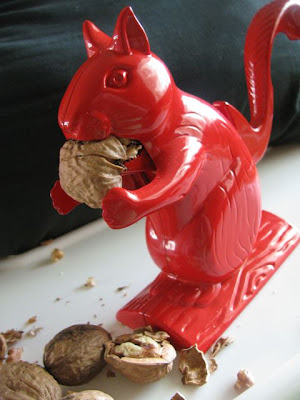 My figs got some mushed up with the rhubarb that I could only retrieve a few. So I served them with some of the rhubarb, a dollop of yoghurt and some walnuts. Did I mention walnuts are in season? Big bags of Victorian walnuts can be found in markets and fruit and nut shops. Now that we have our squirrel nutcracker, there is lots of fun to be had in cracking nuts. Ironically, despite all the autumn produce, it was a balmy autumn day and we were able to take Sylvia's high chair out into the back garden and eat lunch outside. 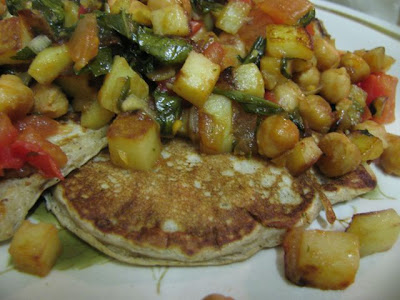 We had plenty of pancakes leftover at dinner time. I fried some onion with diced waxy potato, a tin of chickpeas, garlic and a pinch of salt till soft and browned, A few minutes before serving I added some chopped fresh tomato and chopped sorrel. It was delicious over the pancakes. Sylvia didn't have the topping but loved the pancakes. 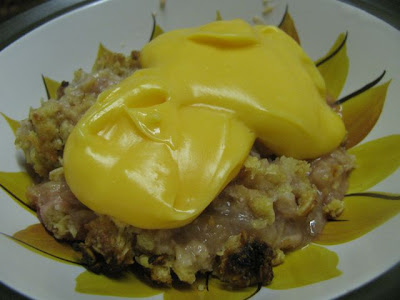 For dessert I added some pear to the stewed rhubarb and made crumble. Sylvia had enjoyed the stewed fruit and gobbled it up with the crumble. E decided he needed custard with it. I told him any idiot could make custard and he went on to prove it. Seriously you can see it is not a bad effort for his first pot of custard (with custard powder, which is what I regularly use). E thought the crumble a bit tart but loved it with custard. I was pleased to finally have a success with a rhubarb crumble and one I could feel Sylvia too. Autumn is a wonderful time for dessert!

Place figs in a small baking dish so they are quite close together - I used a ramekin which was a little squashy. Dot butter and drizzle orange juice, zest, honey and Cointreau over the figs. Sprinkle with walnuts. Bake at 180 C for about 30 minutes. The recipe says to baste with juices every 10 minutes but I didn't.

When figs are cooked, cool slightly (or altogether - I had some of them the next morning for breakfast). Toast the fruit bread so it is golden brown. Spread with marscapone cheese or cream cheese and top with figs.

Alternately serve on cheese pancakes below or serve over icecream.

Mix all ingredients til mixed. Rest for about 30 minutes. Heat non stick frypan, grease with butter and drop dessertspoonfuls of batter into medium hot pan to make small pancakes or about 3 spoonfuls to make large pancakes. (I did about 3 small ones at a time.) Cook till bubbles appear and the underside is golden brown. Flip pancake over and fry another few minutes until it is a lacy brown colour. Eat warm from the frypan or keep for 24 hours in fridge and reheat in microwave.

Bring rhubarb, honey and lemon to the boil in a large saucepan and simmer for approximately 10-15 minutes til rhubarb is just done. This will make more than you need for the above recipe but can be used for smoothies, crumbles or other baking.

Rhubarb and Pear Crumble
adapted from this crumble
Serves 4-6

Place rhubarb, orange juice, honey and golden syrup in a medium oven proof dish. Bake at 180 C for about 30 minutes or until soft. (I baked my 4 remaining figs in with this lot too.) While it is baking, lightly stew pears in a dribble of water. When the rhubarb comes out of the oven add banana and pears.

To make the crumble, rub the butter into the remaining crumble ingredients til moist and crumbly. Mine seemed to have too much butter so I think I would use a bit less (maybe 50g for a start). Scatter the crumble over the stewed fruit. Bake at 180 C for about 30-40 minutes til the crumble topping is golden brown. I think mine was came out a little earlier but I knew I would be reheating it in the oven over the next night or two so I didn't want it too overdone - esp as the peaks were a little dark.

Serve warm with cream or yoghurt or custard! I can eat it cold for breakfast too but I know that is not everyone's preference!