Sappho Bookstore Cafe - for the literati who lunch 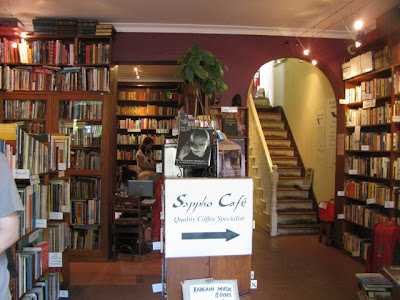 Let me cast my mind back to a few weeks ago when E, Sylvia and I were having a sightseeing day in Sydney. I have so often eaten substandard food during my travels that I decided to do my homework this time. When my sister, Francesca, lived in Sydney many years ago, I always loved visiting Glebe so I decided we would lunch there. I checked out Lisa's recommendations but it was at Not Quite Nigella that I made my decision where we would go. 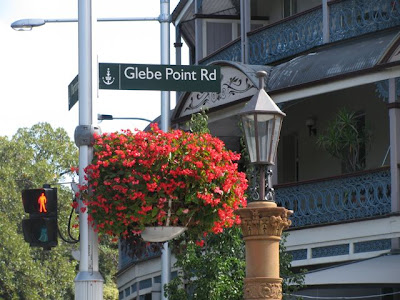 So it was that we walked from Central Station to Glebe Point Road in search of Sappho Bookstore Cafe. 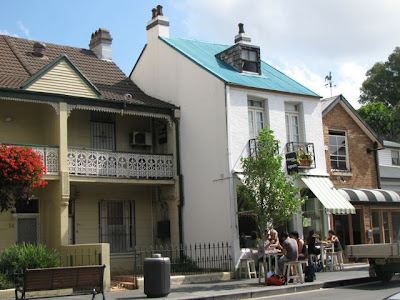 It is not a long stretch of cafes and stores but I love all the old terrace houses and the cafes spilling out onto the street. They take me back to when I was a young student keen on sketching old buildings. 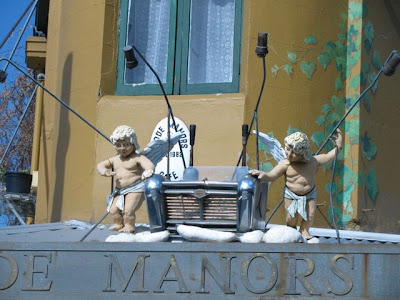 We passed Badde Manors Cafe which I remember from all those years ago. My memory is too blurry to remember if I ever ate here. The fantastic decor beckons a passerby inside but I was looking for shelves and shelves of books as well as quirky decorations. 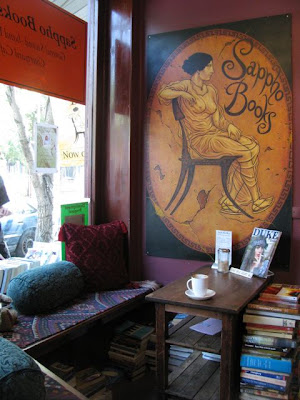 Sappho Books is next door to Glebe Books. I remember visiting the latter too but don't remember a bookstore next door. How could I have forgotten such an enticing window seat that is perfect for a spell of people watching over coffee. 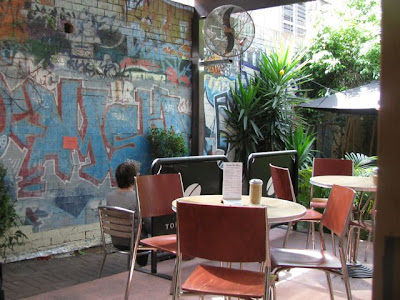 We passed the bookshelves, ordered at the counter and made our way to the leafy courtyard out the back where the tables and chairs are. Being a midweek afternoon it wasn't too busy but I imagine it would be hard to get a table on a weekend. It really is a wonderful space to sit and while away the time. 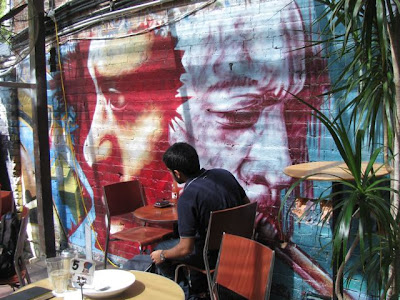 The Sappho Books website mentions that this building used to be a youth centre and when it became a bookstore, the graffiti was retained. It adds a touch of grungy chic to the space. The only thing that surprised me was that down the very back were some smoking tables. I thought this was illegal these days but maybe that is just in Victoria and not New South Wales. 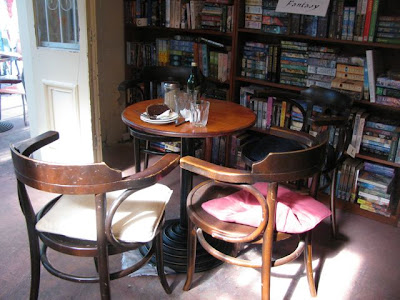 Lorraine of NQN had mentioned that the most sought after seat is in among the science fiction books overseeing the courtyard. So when I saw it was vacant, I nabbed the table. E said it that seeing all the sci fi made him feel like a teetotaller in a bottle shop.

Then began the comedy of errors that was our order. E's ham and cheese sandwich arrived without incident but I had ordered Sylvia some toast, cheese slices and cherry tomatoes. This was not on the menu but I have found myself needing to be creative to cater for her limited diet. The young guys who had taken the order were really sweet and helpful.

They brought out Sylvia's cheese and tomato artistically arranged on the plate with garnishes of twirls of ham! Oh dear, I think they are artists trapped in a waiter's body! I hate having to say I can't eat that and now I am having to say she can't eat it either. The waiter understood that I wasn't comfortable to just take off the ham so he made up a fresh plate with no meat. Then I had to ask for butter and once it appeared, I had to ask for a knife. 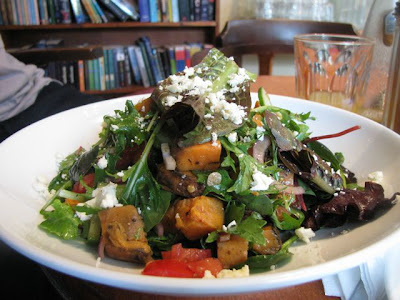 Once Sylvia's food was sorted I turned to my salad. I had ordered the roasted sweet potato with feta cheese & walnuts. Ordering salads when eating out is always a bit hit or miss. This salad was really really good. And that was before I realised that there were no walnuts. I told my friendly waiters and they helpfully brought me out some walnuts in a small bowl. E told me that I was a difficult customer and they would be glad to see the back of me, but they never made me feel uncomfortable for asking for help.

If I lived in Sydney I would return just for the salad. It had a light but flavourful dressing and lots of leafy salad, tomatoes, cucumbers, roasted sweet potatoes as well as the feta and walnuts. It is unusual to find a salad full of good vegetables and protein. The sweet potato could have been cooked just a tad more but this is a personal preference of mine. This was substantial and satisfying enough to eat as a meal. I would confidently say that this is one of the best salads I have eaten in a cafe for a long time. 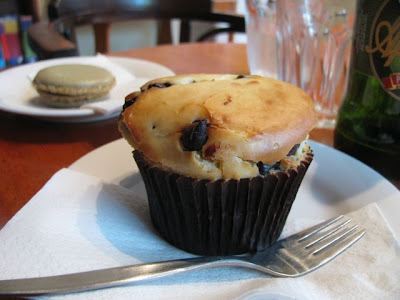 I enjoyed the salad so much that I had to try the sweet food. I had a chocolate muffin with cheesecake topping. It was warmed through a little too much but was very nice. E had a macaron which was a bit dry and disappointing. However, this was not enough to dampen our enthusiasm for the place. 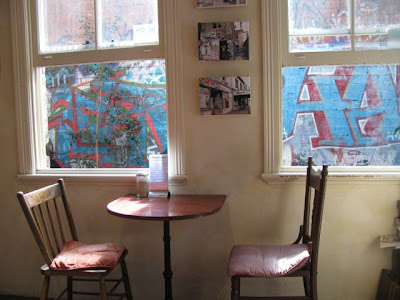 As for Sylvia, she ate some of the food, though never as much as I would like. Then she needed to stretch her legs so I helped her walk out to the bookshop where she was fascinated by the knobs on a Marshall amp that was being used as a shelf for a book display. But when she became interested in getting her grubby little mitts on the books it was time to go, even though I wished for more time to browse!